I have some results that some of the .338 Shooters here may be interested in. A friend of mine that is also a member here "Dave300" came out to my long range shooting school and purchased a 338 Lapua AI from me. While he was here we went over reloading, ballistic apps, bullets, and spent 3 days afield shooting near and far in wind and canyons. We stretched the rifle to well over 2000 yards with confirmed hits on 1 moa or less sized targets. Dave300 went home and on his first elk hunt took a good friend of his up to fill a cow tag. They had a cow at 1580 to 1600 yards. They were laser rangefinder challenged, and were fighting getting repeated reading but finally confirmed several readings at 1600 yards. Dave300 got his friend behind the rifle and set up as they dialed in the elevation and windage. Dave300 told him to send it when he was solid on the cow. With 3 or 4 different guys spotting the bullet was sent. The vapor trail was vivid as the bullet rose above and out of the spotters field of view and then came back in. The bullet landed center kill zone and it cow elk hunched up. She took a couple steps down hill and piled up. As they chambered a follow up the spotters reported she raised her head, attempted to get up and then expired and was done.

This is the farthest kill I have been able to gather data on for the New Berger 300 gr Elite Hunter. So I want to share the results, and a few pics, for those ELR hunters considering this bullet.

The bullet entered just behind the shoulder at the first rib or two. It all exited far side, at rib 3 or 4 with a nice exit hole. The vitals were mush with a good portion of the far side lung gone or unable to be identified in the jello. The heart was untouched.

Facts:
Bullet expanded well as can be seen in front edge of jacket pic. and exit hole size
We believe all lead, and 3/4 jacket exited the elk. No other fragments were found in vitals or during butcher of the elk.
Back 1/2 of jacket was found at far side exit hole just short of the hide.
Remaining jacket weight is 35.5 gr
Wound channel measured 22" and a full penetration.
Exit hole was just over 1" x 1 1/4"
Approximate impact velocity 1665 fps
Impact energy 1847 lbs
Flight time was 2.156 seconds.

Here is the pic of Dave300 and his good friend who now has a story of a lifetime to share along with elk in the freezer. 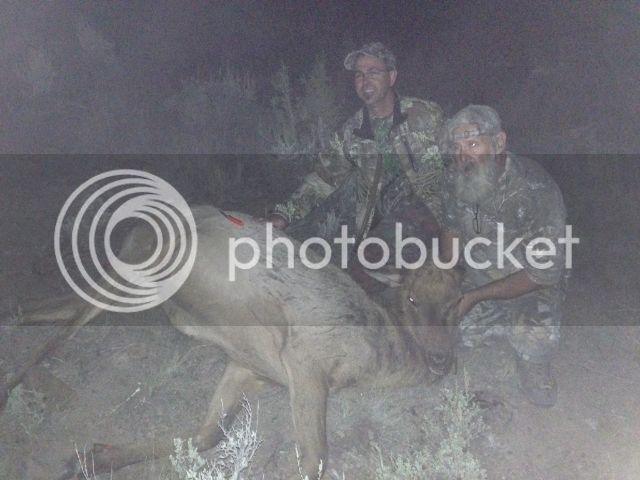 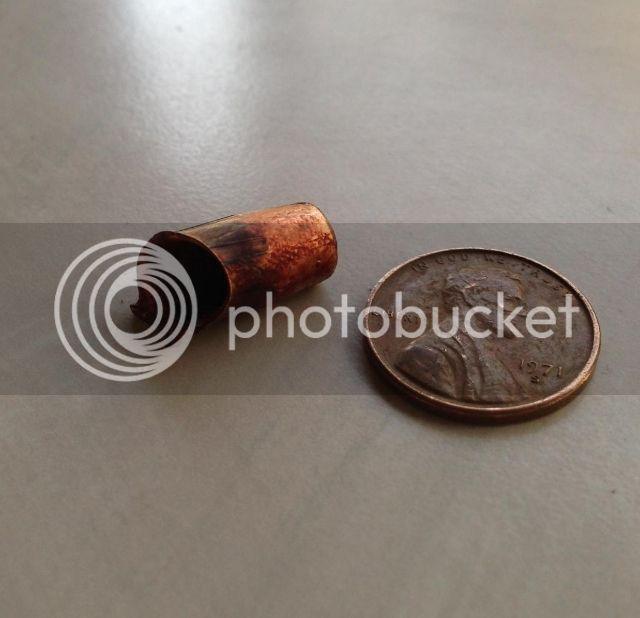 The exit hole after hide was skinned removed during butcher. 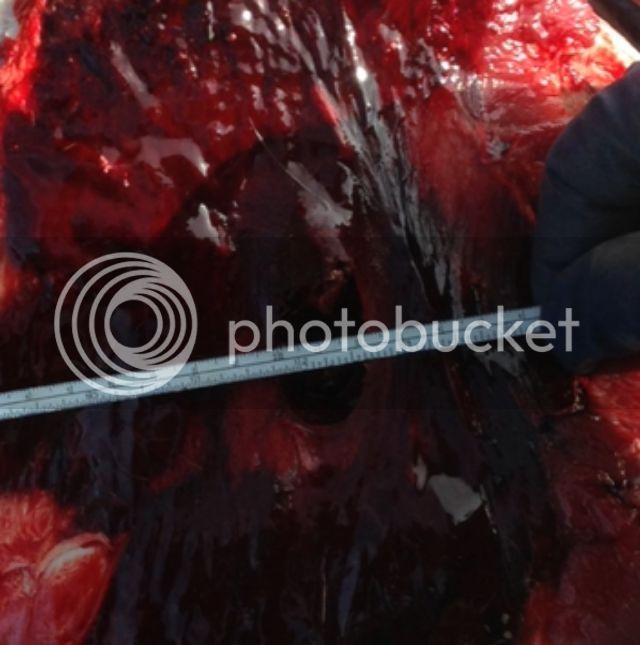 So there is what we have. Draw your own conclusions as to whether or not these results suit you. At close to a mile, I for one am please to see the size of the exit and terminal results. I know this is only one instance, but these results work for me very well for a ELR hunting bullet.

That's the most complete analysis of a shot, and the end results I've ever seen Broz. I guess explaining over and over to knuckleheads like me has been good for something. Thanks for your effort.

Yep, we're getting professional around here.

That's my bullet too!
B

Just Wow and a very big congradulations to the shooter, that is precision long range hunting at it's finest!

That is a great report of how those bullets are performing, one day i may have a .338
M

That is awesome!!!! Just wish I could get my **** gun to shoot those things well
D

Sometime next year I will be looking for advise on what bullet I should begin with for my 338 Edge. I won't have time to play with it this year but I went with a Shawn Carlock duplication and had a Hart barrel installed on my action, 28" long. I hope I get good results with a good bullet. I have yet to begin shopping for a 338 bullet.

Jeff, what is the load for that rifle? Will you share rifle build details?
B

Derek M. said:
Jeff, what is the load for that rifle? Will you share rifle build details?
Click to expand...

No Fear in Accuracy

It is pretty flat shooting for 300 grain bullet.
B

No Fear in Accuracy said:
The drop moa is about 46?

It is pretty flat shooting for 300 grain bullet.
Click to expand...

Thanks Jeff. I'm sure I'll be happy with the Hart bbl. I sure love my others.
C

That is some good info and I wish I could have got my 338 edge to like this bullet but I didn't have much time to mess with them so I just loaded up the good old sierras for my elk hunt this weekend. When I get back I will definetly be messing with the Bergers again. Broz, how far off the lands have you found these bullet liked. Thanks again for the great info.
B

Clndesl said:
That is some good info and I wish I could have got my 338 edge to like this bullet but I didn't have much time to mess with them so I just loaded up the good old sierras for my elk hunt this weekend. When I get back I will definetly be messing with the Bergers again. Broz, how far off the lands have you found these bullet liked. Thanks again for the great info.
Click to expand...