I couldn't expand the picture without being logged into the Hammer site.

That why I use Barnes. Like a 4 bladed boat prop going thru meat.

Nice comparison for sure I'm hoping to order some bullets from ya soon.also did yall get the you tube channel going yet?

Excellent performance! Good job! Hammer wound channel is devastating and leaves a good blood trail if they can run. Haven't recovered a bullet yet on southern whitetails. All are pass throughs, 205 down to 84 grs.

HARPERC said:
I couldn't expand the picture without being logged into the Hammer site.
Click to expand...

Just do a 2 finger zoom where it is in Steve's post. I'm using a SAMSUNG phone however....

SamuelBerryhill308 said:
Nice comparison for sure I'm hoping to order some bullets from ya soon.also did yall get the you tube channel going yet?
Click to expand...

As far as I know it works. I am definitely not good at the computer stuff. If you have something to put on it let me know and I will get our IT to take care of it.

RockyMtnMT said:
As far as I know it works. I am definitely not good at the computer stuff. If you have something to put on it let me know and I will get our IT to take care of it.
Click to expand...

Privi457 said:
That why I use Barnes. Like a 4 bladed boat prop going thru meat.
Click to expand...

I guess we need to melt down the blocks and do the test.

Privi457 said:
That why I use Barnes. Like a 4 bladed boat prop going thru meat.
Click to expand...

Very different bullet than a hammer, and a different method of terminal performance. The hammer sheds it's frontal area quickly, loosing as little velocity as possible, and the bullet diameter (or slightly larger) flat fronted shank penetrates deep with a high retained velocity, causing hydrostatic shock. Barnes expand in a mushroom similar to a traditional bonded bullet.

Not saying anything bad about either, simply pointing out the differences between the two.
D

Maybe I missed it, how did the frontal areas of the two compare?

dogz said:
Maybe I missed it, how did the frontal areas of the two compare?
Click to expand...

Not sure exactly how this test did, or how the accubond did, but below is typical hammer bullets (not my images) - 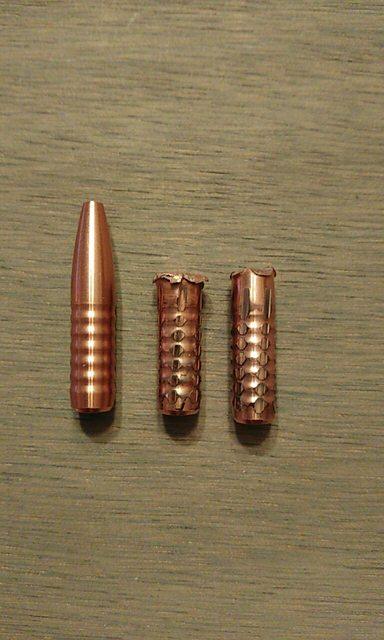 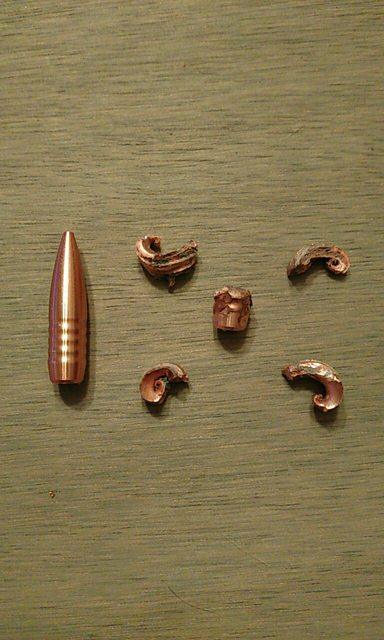 The lack of "expansion" was offputting to me at first, until I read about how they work. Steve explains it perfectly here (from another forum dated september 2017) -

"My name is Steve. I am the manufacturer of Hammer Bullets. I understand exactly where you are coming from. What our bullet does is not what we all grew up understanding what a bullet is supposed to. We all grew up thinking that a bullet failed if it does not have a double caliber mushroom. I have always been a bit of a tinkerer and was always in search of a better bullet. I got real tired of making a good shot on an animal and losing meat that I did not hit due to blood shot. I my quest I found a particular mono metal bullet and really liked how they worked. Long story short, my partner and I designed a bullet and we were able to get a patent on it. Today we are a year and a half since we launched our bullet for sale.

The answers that have been given do a pretty good job of describing how a bullet like ours does it's job on impact. They are designed to shed the petals and create a flat frontal area to displace soft tissue perpendicular to the direction that the bullet is traveling. The goal with all bullets is to create a permanent wound channel that bleeds in order to cause the central nervous system of an animal to fail. Velocity of a bullet as it goes through an animal is what causes the trauma. The soft tissue that needs to be damaged is elastic or stretchy. So the goal is to push it out of shape enough to cause it to not be able to come back into its original shape. What is called a permanent wound channel. Study shows that a smaller flat frontal area of a bullet will cause a larger permanent wound channel than a larger rounded frontal area of a classic mushroomed bullet will. The other reason that we want the nose petals to shed is we do not want the bullet to slow down too much while inside the animal. As the bullet slows down it causes less damage. So the idea of leaving all the energy of a bullet in the animal really an old wives tale. It is not the energy of a bullet that does the damage, it is the displacement of soft tissue. I can throw a rock at a deer and hit it with more energy than a bullet. With a good hit that rock will bounce off the deer and leave all of its energy on the deer. Pretty rare that I can kill a deer with that high energy rock. So as a bullet slows to a stop inside of the animal the amount of damage it does reduces relative to how fast it is still traveling. Here is a link to a physics study that we based our design on. It is a worthy read for those who are interested in terminal performance of bullets. It is long and dry but well worth the read. Shooting holes in wounding theories. Terminal Ballistics"

Hope I'm not stepping on your toes Steve, if so, let me know and I'll delete my posts....