Hopefully someone with real experience at super long ranges can answer this one. I first saw this theory somewhere (can't remember where) a long time ago, and saved this picture. I recently read a post by Shawn Carlock and he mentioned the same phenomenon (9 o'clock wind will drop POI, 3 o'clock raises it). I've not seen any sort of confirmation of this in the Ballistic Software I've got. Neither the new NightForce PC version or the old Sierra Version 2 programs show this happening?

If it really does happen, then why? Why does the NF program have ways to adjust for Spin Drift and Coriolis Effect but leave this phenomenon out??

Any answers to this one?? Perhaps Shawn would like to answer since he did some SD studies for NF?? 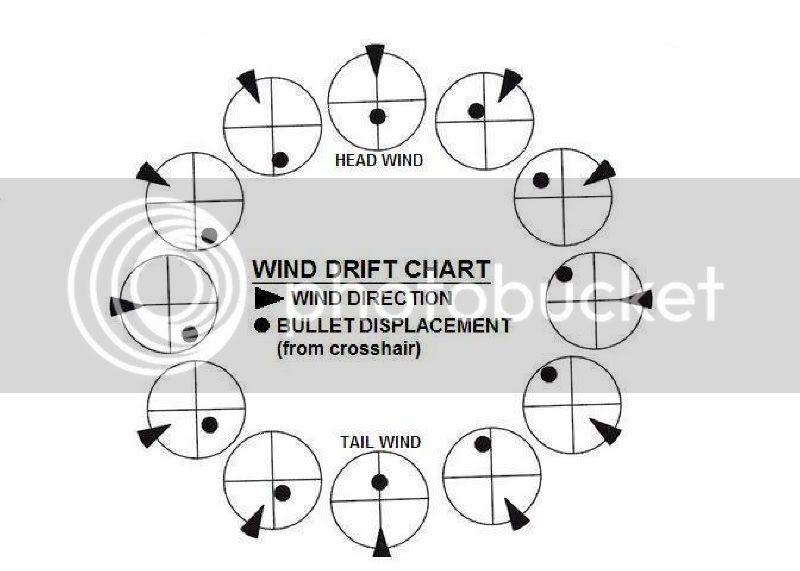 i'd get ahold of brian litz he's always floating around on these web sites.or email him i think hes a sponser on here moball
M

You are correct in that there is a verticle component to crosswinds. It should also be noted that when a left twist barrel is used the opposite direction takes place.

I dont know of any software that compensates for it as the amount of rise or fall is very minimal.

If there is so much wind that it will have a major impact, we dont need to be shooting at game at that time.

The vertical deflection occurs in the first few precession cycles after the bullet enters into a crosswind and is forced to realign it's axis with the oncoming air-flow. In other words, as the bullet is torqued to weather-vane into the wind, it sets up a gyroscopic action which results in the bullet being deflected down when it's axis is torqued by a left-to-right crosswind and vise versa. (this applies for a right twist barrel. As Michael stated above, the effect is opposite for a left twist barrel, which is very rare).

Here's where it gets tricky (and where I think Vaughn's explanation is incomplete and misleading).

There are practical considerations.

Most places that you're likely to shoot long range have some kind of terrain, meaning the land isn't perfectly flat. If you have a strong enough wind to cause a large horizontal deflection, the chances are good that the terrain will actually generate vertical winds which will deflect the bullet vertically and mask the above effect.

On rare occasions shooting on very flat ranges, I've used knowledge of this effect to save some points in big wind changes. If the wind picks up strong from the right and I have to crank on a lot of right wind, I may go a click or two down to keep the bullet from striking high and vise versa. If you try to play this game when shooting over terrain which generates actual vertical wind then there's another variable to consider and it's usually more significant than the effect we're discussing.

I've thought about working it into a ballistics program. Part of the problem is that in order to calculate the amount of deflection you need to know obscure things about the bullet like it's axial and transverse moments of inertia, and some aerodynamic coefficients that the shooter will not know. Any practical solution would have to rely on a metric like the stability factor to approximate the deflection. Even if it could be calculated perfectly, it goes hand-in-hand with a wind call which we all know are not exact and may be overwhelmed by a vertical wind current.

Bryan, thanks for sharing your in depth knowledge on a not so simple subject. I appreciate it.
Last edited: Jan 14, 2010
S

Thanks folks, for clearing this up a little. Much appreciated.

I understand the Vertical Wind issue. I always thought that the slight vertical I was sometimes seeing on Prarie dogs was due to the wind "rolling" over the hill and then going back up after it "bounced" off the ground again..................It now appears that there were possibly other issues that may have been compounding this, or acting altogether on their own??

How many of you super long rangers actually try to compensate for this effect by dialing in some vertical too?
Seems that it would be very hard to know just how much compensation to give?.................Especially since none of the Ballistic Calculators (that I've used anyway) address this at all. The NF program doesn't even have an option for vertical winds (that I've noticed)

The Sierra program does have a vertical wind input option (at least on the old Version 2) but it appears to be vertical only (no slant or slope winds) I am assuming that you would have to figure manually what percentage or fraction of the total wind is vertical before you could input the data??

This is just kind of a guess on my part, but I would think that a ballistic calculator/PDA/Handheld, ect. that would allow you to input the wind relative to the barrel axis (0-360, 0 being true down vertical wind) AND input the standard crosswind in the "clock" form would be the cat's meow for those people that shoot long range in the mountains or canyons, where the wind always has some vertical to it.??

Very interesting subject, and Thanks again for the insight.
Last edited: Jan 13, 2010
S

Just bumping this to get it back toward the front. Interested to get some more answers.
H

Talk to some helicopter door gunners and they will tell you left side of the aircraft aim low, right side aim high.......
S

That would certainly confirm the theory. Thanks
S

helidriver72 said:
Talk to some helicopter door gunners and they will tell you left side of the aircraft aim low, right side aim high.......
Click to expand...

I would think that the rotor downwash would cause them to always aim high by a certain amount, but on the other hand; shooting down at an angle toward something on the ground would cause the bullets to hit high if aiming right on.

Do these two effects (downwash and angle) combine and kinda cancel each other out?
T

I have been doing some testing over the last few weeks at 820 to 850 yards at a location where I validate my rifles.

Now when I do my validations I do it when there is no wind. One this occasion however I had a wind of about 10mph coming in over the trees at 2 O'clock.
I found that the bullets were hiting about 8" lower on the target than they should have.
The next day with similar conditions I repeated the exercise with similar results.
On the third day however the wind was still and when I repeated the test my bullet impact was back on target as per my validation chart.

So my piont is...........Beware of shooting down wind of a long stand of trees. They create a down draft on the leeward side. And possibly an updraft on the windward side.
H

I would think that the rotor downwash would cause them to always aim high by a certain amount, but on the other hand; shooting down at an angle toward something on the ground would cause the bullets to hit high if aiming right on.

Do these two effects (downwash and angle) combine and kinda cancel each other out?
Click to expand...

The conditions I was referring to where when in forward flight, rotor downwash isn't really noticeable with more than 15 knots forward airspeed. Imagine shooting in a 80-100 knot crosswind?
Share:
Reddit Pinterest Tumblr WhatsApp Email Share Link