How much Energy to kill a Deer?

Does any one know the minumum amount of foot pounds of energy does it take to kill a whitetail Deer?
N

Well, they've been killed by longbows for centuries, so I'll guess about 50. It's probably lower than that actually.
J

Not getting in to this one due to many different variables to each. I saw Ted Nugent shoot a deer at 100yrds with a 10mm. It ran away. He stalked it and shot it 3 more times up close and it still ran. So I'm not real sure what your going for hear, a ****ing match or just that fact I was offering a suggestion? Depending on bullet, ability and equipment will determine what works. These are the numbers that I have been told and well it just makes sense. More for elk, less for deer, and ever less for varmints. I don't know, go use a sling shot for all I care, I'm just trying to offer some information that I think would be helpful. This energy and foot pound thing has been talked to death and quite frankly my thoughts are shoot as far as you are capably accurate to shoot in the vitals.

.308's are to be a worthless caliber for 1000yrds to kill something, but snipers are knocking taliban over at 1000yrds with this worthless caliber. I have talked to several snipers and know one personally that spent 4yrs in the jungles of Vietnam that has killed men to 1800yrds with a 300 Weatherby. So you pick the numbers and the calibers and tell them what you think he should use. I'm just offering advice. 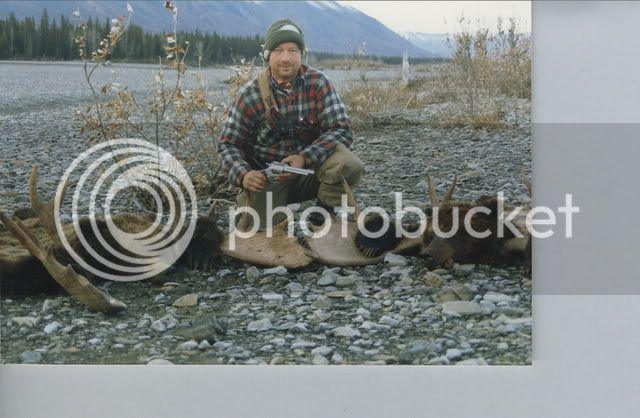 liltank said:
Not getting in to this one due to many different variables to each. I saw Ted Nugent shoot a deer at 100yrds with a 10mm. It ran away. He stalked it and shot it 3 more times up close and it still ran..

Ted also killed a Cape Buffalo with the 10mm. Foot pounds of energy is not the way to rate wound trauma incapacitation.
Last edited: Nov 26, 2009
A

way to put it Tank. As LR hunters we need to have a basic guideline for how far is too far. 1000 ft/lbs used by many people on this site as a guideline, not the rule. 1600 fps (or whatever the manufacturers spec is) is a good Guideline for how slow most high B.C copper jacketed bullets will open reliably. I understand, as well as others, that momentum is a better system but energy does work in most cases.
B

I've shot a pile of does with a 22-250 out to ranges where they are running 600-800 ft lbs of energy but all that energy was delivered to vital organs. If you don't deliver energy to the vitals you need to make that up with larger bullets to get the wound channel needed to do a good job.
A ballistics calculator will give you the same energy specs for a FMJ round as a V-max however only one will deliver the available energy, so it really boils down to common sence do the math to see what you have to work with then look at bullet construction to see that it is going to deliver the goods in the manner your looking for.
M

jwp475 said:
...instead it is transformed into other forms of energy (mostly thermal ).
Click to expand...

Hope you're having a good argumentative day.
M

700man said:
Does any one know the minumum amount of foot pounds of energy does it take to kill a whitetail Deer?
Click to expand...


I dont look at energy for deciding how far or what to use for killing deer/elk or whatever. I look at the bullet's construction and designed performance and impact velocity.

Most bullets are designed to open at 1800 fps. Some a litttle lower. "Most" bullets in "most" calibers that have enough velocity to expand have enough momentum to pentrate far enough into the vitals to be fatal, depending on shot angle and placement. Two different bullets fired out of the same rilfe may have very different killing potentials depending on their design and construction and placement. There is no clean cut magic number or anything like that. It takes some knowledge of the bullet and a subjective evalution on the part of the hunter to make the call.

Ted also killed a Cape Buffalo with the 10mm. Foot pounds of energy is not the way to rate wound trauma incapacitation.
Click to expand...

What the heck were they or he aiming at? The anlters? Just kidding but on a serious note I have never put more than one bullet in a whitetail. This was using caliber from .204(I know laugh all you want)to 7rm. However I have a ? to you on the 180 bullet that was used? Was it by chane a swift scirocco? I witnessed an elk and mule deer get shot this year and both took multiple shots(elk took 6!)(mule deer took 4!) The elk was a 480 and the deer at 150. I am not convinced on these bullets and after that hunt I think I got my buddy convinced to change to a different bullet.

My point here is I don't think you can use "energy" values. I think it is shock value. I am not a bow hunter, so I won't go there, but, I have seen my kids hammer quite a few does with my 220 swift and 55 gr balistic tips. All were hit in the chest cavity.....none exited....all of the "important" parts, though not always all hit by fragments, were bloodshot and/or otherwise very unhealthy looking. Very dramatic kills!!! And the pistol guys....those bullets are designed with very flat tips and are designed to open up at much slower velocitys.....shock value. Any animal who has his "important parts" hit will die, weather or not the bullet zips on through or explodes. But...I think the "dramatic kills (other than spine/brain shots) happen when there is lots of shock, IE..the bullet opening up. I think you should be sure that you are shooting within distances that will allow your bullet to expand. Now, do I always follow this guidline.......nope....I don't. I have taken deer at "extended" ranges where the bullet didn't open up. Unfortunaly, not all were hit in the heart lungs. On these I had some tracking on my hands. I ALWAYS wait at least a couple of hours before I go after the animal if I am not sure of the hit....let them stiffen up.

This is, of course, my opinion. I won't debate it. It is not a scientific, and there will be a million guys who will have the "oh ya...well I saw uncle so n so shoot a deer at......"

P
How much to shoot