Everyones favorite big game rifle, and its set up?

I have always been interested in what gun people shoot. I love to know what calibers are popular, why they like them, what kind of scope is on it, what size bullet you shoot and what animals you hunt with it.

I currently shoot a 30-06 Remington model 742 that i inherited from my uncle which i am giving to my brother for his birthday and a Remington model 700 BDL 7mm rem mag shooting 160 grain accubonds but i think im going to drop to a 150-140 grain for whitetail, mule and more smaller game and longer ranges. I am in the middle of buying a Browning A-Bolt 300. wsm which will replace both my 30-06 and my 7mm for big game. I have never shot a 300. wsm but i think i will love it. I want to know what everyone shoots, and at what game
M

Mine Big Game rifle is a Remington 700xcr in 270wsm. Have a Burris Euro-Diamond 2.5x10x44mm with the Ballistic Plex reticle. Handloaded Nosler 140gr. Accubond. Have taken serveral mule deer with this combo.
D

Tikka t3, 300wsm, Nikon 3x9x40 bdc, light weight, very inexpensive, very accurate, low recoil, detachable mag, 180 ballistic silvertip, Elk- bear- dear- coyotes and anything els worth shooting. It is a good do anything round but coyotes at thirty yards just get penciled threw without bullet expansion and it really is not that hard on em at long range because I know how to so.
M

I guess my favorite would be my Rem 700 in 300 WM. The gun started life as their standard LSS model. After a couple years, I had Hill Country Rifles pillar and glass bed it into a McMillan Edge Sporter stock along with a little trigger work and recrowning of the muzzle. The gun was a tack driver and did a lot of hunting as well as gave me some good fundamentals on long range shooting. So much so that I shot the throat out of it this last year.

It is now in the hands of Kevin Cram at Montour County Rifles for an action blueprint, Holland Lug, Broughton 4.1 contour bbl with an 11 twist, the caliber will stay the same. Also putting on a Vais and muzzle cap. It wears a 4.5x14x40 LR VX-III in Talley lightweight one piece ring/bases. This guns sort of been work in motion all along and has given me some great opportunities on long range hunting and shooting.
I 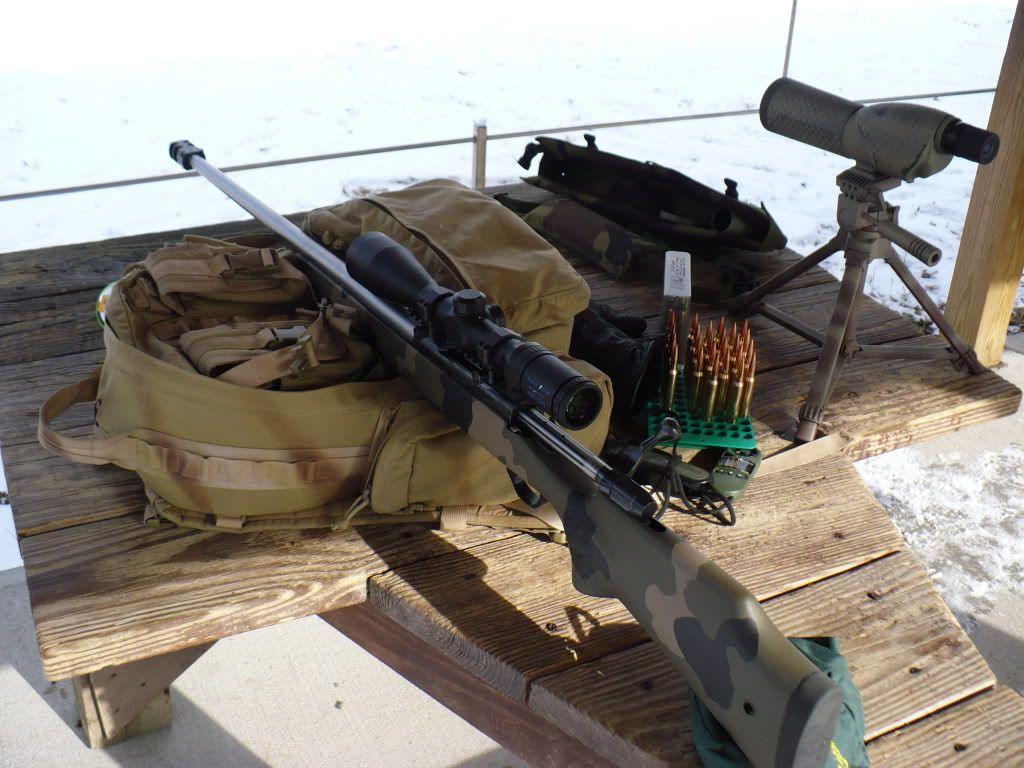 ICANHITHIMMAN said:
My new fav is my 300 win mag by Kevin Cram
Click to expand...


I've been following your posts on this one. Looks like a nice setup and sweet shooter.
R

Below is my favorate hunting rifle. It also happens to be chamberd in my favorate cartridge, 308. Every thing about it is set up for the maximum amount of speed with the maximum amount of accuracy. Lets just say she doesnt dissapoint. I like the 308 because of it's long barrel life, extreme accuracy and efficiency, short action and mild recoil. It also doubles up as an F-Class rifle. I have only shot one F-Class with it but scored 200/200 without any trouble even with an off and on breeze. I intend to do more F-Class this year. I will be using my 190 load at 2723 FPS. I use the 178 AMAX for up to deer size critters and the 200 SGK for large mule deer, Mountain goats, moose, elk and bears. It has taken dall sheep, wolves, caribou, moose, black bear, mule deer, sitka blacktail deer, and coues whitetail deer. A close second favorate is the 338 Edge running 300 grain SMK's. I use that for the larger bears, long range moose and have taken a mt. goat with it.

I just wrote a long, entertaining and insightful contribution to this thread - which vanished when my ISP had a conniption. So many nice toys, ah! Two brands I see no mention of (correct me if I'm wrong) are Kimber and Christensen.

A rep was talking up Kimber's 8400 Advanced Tactical™ .300 Win. Mag. and my local gun shop owner is drooling over Christensen Arms rifles at the moment. Any thoughts people?

I'm about to build/buy my first LR Hunting rifle and I want it to be both accurate and sexy. My bare rifle budget is about 4000 of your fine, but ever-fluctuating US$ and I want something light enough to carry but solid enough to make recoil a non-issue.

Thanks from Down Under

This is the rifle that gets used the most here in Texas---Kelby Action, Krieger Tube, Jewell Trigger, HS Bottom Metal, Jloh Rings USO Glass and a Mickey stock in Warp 7 --- a wildcatted 300 win mag built by Speedy Gonzalez 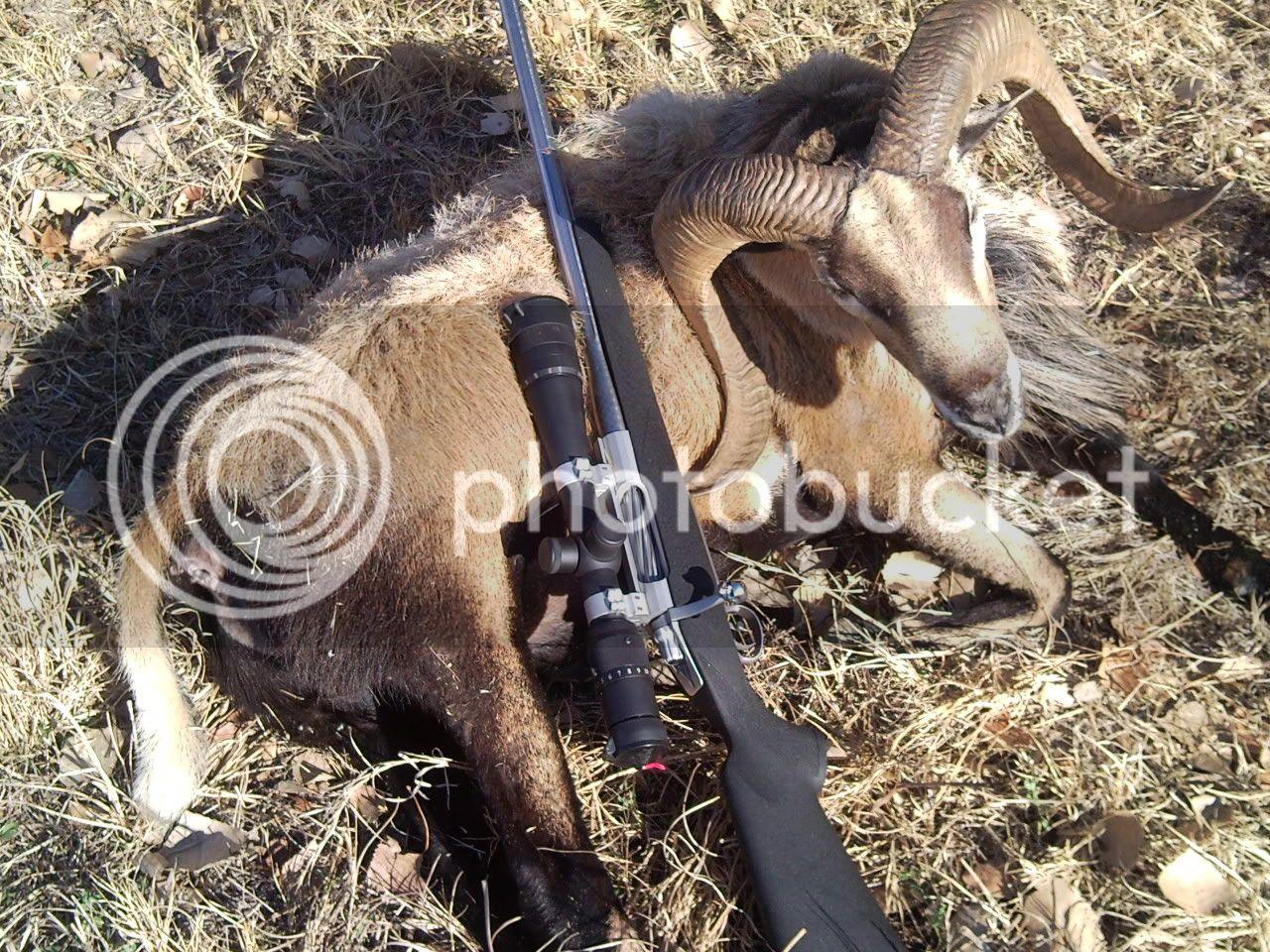 Sweet rifle and a good photo. Thanks.
M

Its Officially Settled. New Rifle on its way