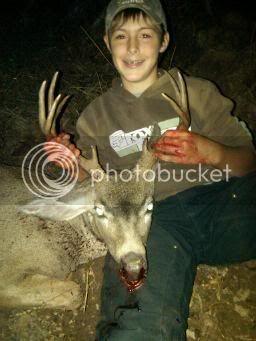 Now, congratulations are in order!

That's sure exciting and not to mention unforgettable memories.

Congrats to you and your dad, awesome shooting and good looking buck!!!
S

First of all congrats on your nice looking deer.
So please tell us why you and your dad was not happy with the bullet.
C

Yes CONGRATS!!!! but please explain your projectile failure. It appears that it worked.

cavtrooper94 said:
. It appears that it worked.
Click to expand...


Yea thats what i was thinking
3

Nice shot! Longer than I've ever harvested an animal at. And I got you by twenty years. Any advice?
O

got you by 2years but you got me by 300yards on longest big game kill, once again. Nice shot!

Nice shot young man! You have done something that some of old timers have yet to do. Good job! I am curious as to what the problem with the bullet was? Keep shooting and nice deer.

Congrats,
Nice buck and real nice shooting.
Tell us what happened with the bullet performance and share more pics of your buck, we will enjoy them.
C

Congratulations, nice deer and great shooting. 300 rum and 14 impressive. Thanks for the pic and sharing.
Last edited: Feb 15, 2010
M

To start, this is my son, we were in Southern Oregon and were set up on an old landing glassing, I was glassing the far ridge were a nice buck slipped away from me that morning. he was glassing a closer ridge when he spotted this buck and and smaller buck standing broadside to us. I ranged him 3 times at 606 , he wasnt sure what to do, a bit to far for his 7mm-08 or at least its not set up for that long of a shot, I convinced him to get behind my rum, took some time to get him on the buck, had to back of the nightforce 5.5 x 22 to get him on , mean time im punching numbers on the pda and dialed up for him. The buck just stood there broadside,
he fired,Whapp!!!! the buck kicked his heels ran 10 yards up the hill and stood there, I knew he was hit , so we decided to make our way around to him.
It took about 30 minutes to get around, by then it was dark. we found the buck standing ,swaying back and fourth, he finished him off with his 08 .
VERY proud dad !! All I had to do was range him, reach over spin the knob and watch.
Ok for the berger question. Honestly I expected to see alot of meat damage, but nothing.... small entrance hole and gone ...nothing it basicly disentergraded blew up....Ive shot lots of bucks all blacktails with corelocks, partitions,accubonds but this is the first time with bergers. It left an un easy feeling , I like to see things gone down . Ive since swithed to smk 220's.
That was a great trip, watching your son take a nice buck is better than shooting it yourself. He took a his first bull this year aswell Ill let him tell that story....... Happy Hunting

Congrats on a nice buck and a nice shot!!

Your not the only one around here thats had bad experience with VLD's on game. I have mixed feelings about them as well. Either they blew up or pencil holed through deer. Granted these were 168 and 180's from a 7 RM, but the 168's blew up at 618 yards, and the 180's penciled right on thru at 100 yards, each were shoulder shots...

I used the 210's in my 300 RUM as well, but never did use them for anything but coyotes and shooting steel. They absolutely tore the crap out of coyotes, based on that alone, I wouldn't use them on deer. I used 200g AB's on deer and elk and never found a bullet, far as i know there still going...
L

Ah, your first deer. Mine was at age 14 too. My dad and I were hunting on Abaho Peak near Monticello Utah. He spotted a doe a long ways off. Not sure how far, can't remember that far back. Anyways, he handed me his A303 and I dumped her.
That hunt is etched in my mind just like your hunt will be.
Good shot Bub. And drpraincage, I'm sure you had a lot to do with your boy's success. Good on ya for introducing your son to the great outdoors.
Last edited: Feb 16, 2010
Share:
Reddit Pinterest Tumblr WhatsApp Email Share Link