I just shot my Savage MKII at 180 yards. Why 180 yards you might ask? Because that's how far it is from my shooting bench to the little dead tree in my pasture that I stapled the target to. I sighted it in at 50 yards a few days ago and the MKII produced a really nice group. It took a little while to find "zero" at 180 yards. I used LoadBase to give me a rough setting in MOA and cranked that in to the scope. It was shooting pretty high. High like off the target. That surprised me. The scope is a Leupold Mark IV 8.5 - 25x that I "salvaged" off of one of my long guns (that should tell you what I think of Leupold scopes but that's another story). It has a Mil Dot reticle... <--- It has a Mil Dot reticle. All of my adjustments were made while thinking MOA... I do not like Mil Dot. To each there own... but that's another reason the scope is on the .22 now.

I shot two groups of 5. The first group was about what I expected and a little low. The wind was zero for group 1 and 1-2 mph headwind for group 2 but I didn't adjust the scope from group to group. Both groups had a flier but due to the distance and not having a spotting scope I don't know at what point the flier showed up. I used my foot powered spotter to go see what the groups looked like.

I was pretty pleased with Group 1 with the exception of the flier. Group 2 makes me scratch my head. Frankly, if someone else posted the target in a thread I would be very skeptical that a .22 could group like #2 did. The wind had picked up a little so I think that explains the 5" drop. But... the little tree had corresponding bullet holes in it so the holes in the target are real live .22 bullet holes. There are four holes lined up about 5" below center. Is that kind of accuracy possible or should I chalk it up to a fluke? If I was shooting my Sendero (7 mag) I wouldn't doubt it... but it's a .22 LR????

I want some honest thoughts... 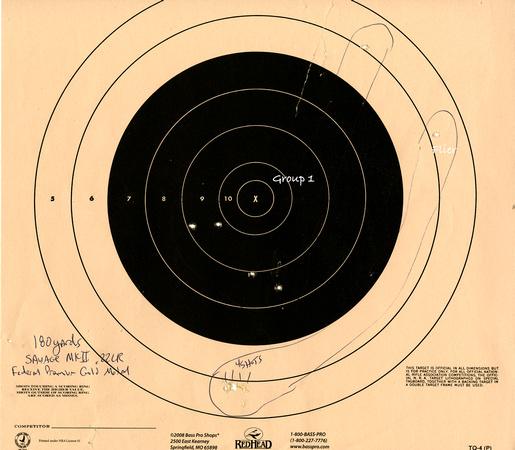 Possible...if I was the shooter probably no but, there are some and probably right here on LRH that could group them pretty good...so sure it's possible. Not saying it's easy but possible.

Well... I'm pretty confident when I shoot my 7mm Rem Mag, .308, and .223 long guns. I routinely shoot sub-MOA with those. The Savage is a good shooter... bullet holes almost in bullet holes at 50 yards so maybe it's possible. I'm going to a "real" range in the near future. I'll be able to figure things out when I do that.

I have one correction to make. Yardage was 150 not 180. We shot it with the range finder about an hour ago because it looked closer than 180. Not sure where 180 came from...
C

Once you've gone to the range, keep us posted on how you do.

I think It is very posibble. I have been with friends while they were shooting more than twice that far with factory .22 rifles and ammo in perfect conditions. I hate to share this with not having any proof to show I really wish I had kept some of those targets to post then I would elaborate further. I can understand that some will be skeptical to this i would be to if I wasn't there. Although I thought the importance of sharing this is to show that no one can ever know what is possible with out trying.

My son and I were playing out to 300 yards this evening. I was pretty impressed with how close we were getting to various targets (cow patties, ant beds, and other assorted fun things to shoot at. I didn't use a ballistic program... we just held over with the scope set to 150 yards. Fun stuff.
3

That's a good looking group, if you wanna see if it's a fluke or repeatable I would suggest to sort your ammo by weight and rim thickness and shoot that distance again. As for the scope send it to Leupold and have a TMR or Leupold Dot installed you'll be much happier.

We were setting up targets directly in line with an old telephone pole that way he could hold off for the shots and once a zero was found on the pole you can mark it with a paintball gun and send some down of course this is again with almost a dead wind which is unusual for were we were. Not the most accurate methods but I was really surprised after we shot for awhile. It is a fun way to plink around during the day waiting for the evening hunt.
W

My buddies and I useto play 100yd golf with our 22's. we'd throw a golf ball out to the pasture and shoot from the shop till one of us knocked the ball into the irrigation ditch(located 103yds from the shop door) Best use Ive ever seen for a golf ball. But this was standing at the door. With a rest and a good 22 it would certainly be possible.
On another note, I was given 5 boxes of Lapua Midas L match ammo for my 22 and at 50yds from a bench I shot a shy 3/8inch group(best group) of 10 rounds. Then with American Eagle cheapo's I shot a long 3/8inch group(best group) of 10. Not a whole lot of differance in performance IMO. And the Lapua's were WAY slow and quiet. Not to mention alot heavier. But P.O.I. wasnt even 1/2 inch away from where the American Eagles hit. 22's seem to suprise everyone from time to time. Definately possible, but hard to duplicate.
B

Don't get me wrong as I love my center fire's but playing with a .22LR out to 300 yds is a hoot. Use standard velocity ammo and it will actually shoot more accurate. You also need good optics with lots of adjustment.
B

It's really fun to shoot that far with a .22 LR. You either need a 20 MOA base, a scope with a lot of adjustment, or a Mil-Dot reticle or similar.

once i got past 100, i really stopped shooting paper at 50 yards, and more or less concentrate on 200. not only is it more of a challenge, but also magnifies any problems with shooting form.

a good rifle with matched ammo is interesting to say the least at 200, rather than cloverleafing .223 and .308s.

the best experience is learning how to better judge wind and compensating for it, which the .22 becomes a valuable economical tool at those ranges. tempurature / humidity / thermals also become a major consideration at those distances, and lessons learned is transferable to the centerfire. 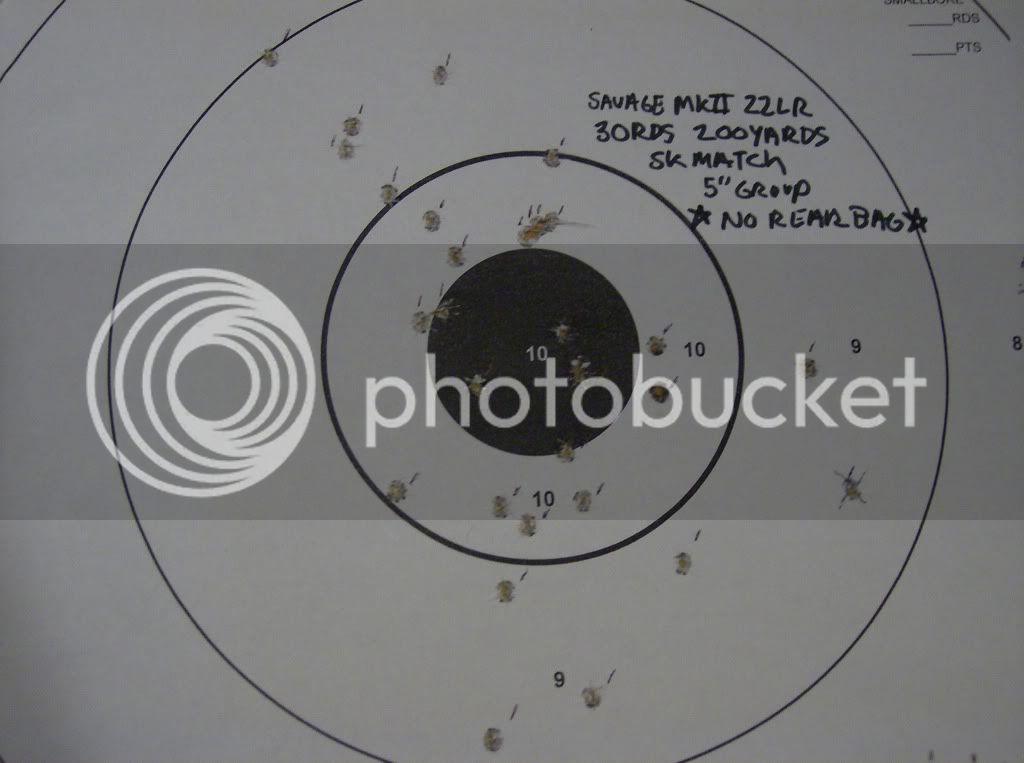 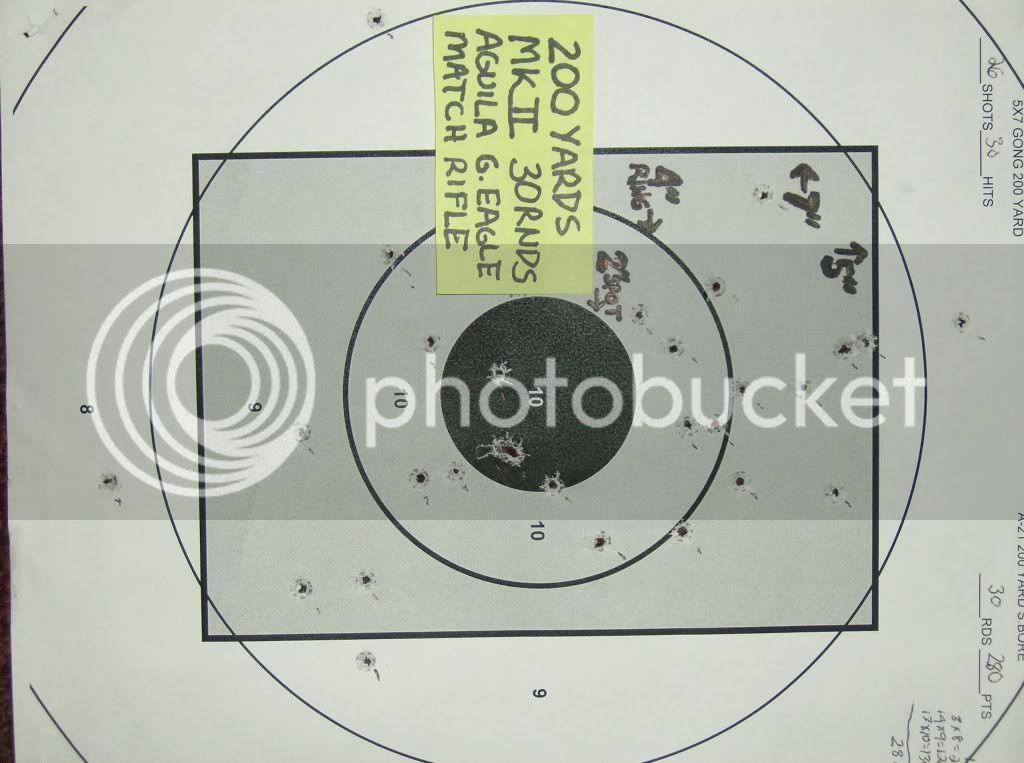 Since I shot this group, the action screws were torqued at 15 inch-pounds and the groups were cut in half. That should make it interesting the next time out.
Last edited: Mar 9, 2010

I let my neighbor run his cows on my little 12 acre pasture. They came through today and randomly scattered targets everywhere It's been raining so a hit shows up very clearly as does a miss. My rangefinder is off to be repaired so I've been eyeballing most shots. I know where 100 and 150 yards is in one general area. The scope is dialed in to 100 yards. Since I can't range it I'm not sure what the longest hit was so far. I held 4 mil-dots over and one mil dot left of a little 6"-ish cow patty in my neighbors section (he has a section and still wants to run cows on my little place???) and it smacked it right dead in the middle. Friggen cracked me up. Time of flight was crazy long. What a kick... I've gone through 2 boxes of .22LR this afternoon... that's more than I've shot .22LR in 20 years probably...
Last edited: Mar 9, 2010
Share:
Reddit Pinterest Tumblr WhatsApp Email Share Link