This year had been a bust for me as far as deer in the bag.

Surgery over the summer prevented me from climbing into tree stands and even though xbows were legalized I never was able to get close to a decent buck.

In general I am buck only due to reduced deer numbers in my area, but many have dropped the antlers and my freezer is bare.,..so if it is brown it is down

With the season coming near the end I decided to go to a field with long views and shot possibilities for my area.
If I could get to the corner of the woods that jut into the field I would have a view of the entire field and a view to where deer often enter the field.
Where they enter in the PM is from another point of woods that will be 360 yards out to 525 yards from my position.

The great thing about my spot is that the wind almost never blows to the other woods direction. If they come out they will work their way toward me or to another area that I can move to unseen by them.

The first problem was that there was a small doe right where I needed to be and I still hoped for a buck. It was only about 3 PM so I snuck toward my corner hoping that she would not break the field and alert the deer in the opposite woods to my presence. She saw me and just went to my left and stayed in my woods so I dodged a bullet...and so did she

As I approach the corner there were a few hundred Canada geese in the field and they started to get nervous. At this point I had wished that I shot the doe but it was too late for that.
Since I couldn't get to the corner without launching the geese and alerting the deer to danger I had to stay back in the woods which reduced my visibility to the field.

Right at sunset 3 deer come running out of the woods about 450 yards away and are heading in my direction in high gear.
I set up and train my scope on the woods hoping a buck will be on their trail...but nothing doing.

Since I am not on the edge of the woods my shot will have to be standing but I have a pretty good rest. They come to 150 yards and stop and watch their back trail. They start toward me almost straight on at a trot and when they clear some brush at 45 yards I shoot the first one. All 3 continue on into the woods about 30 yards to my right but mine only made it in about 5 feet!

Bullet performance was very ugly!
The bullet entered just in front of the right front leg and a ball of guts was visible just in front of the left ham.
There were guts that exited from the entrance wound as if a grenade were in its stomach. I have never seen a more disgusting wound in my life!
Most of the ribcage on the right side was in fragments and only the sternum held the two sides together. The hide was separateed from the ribcage for about 8 inches and the space contained stomach contents!

The only fortunate thing was that none of the legs were touched so there was almost no meat loss at all!

While I would not hesitate to use this bullet again, I will pick my shots very closely so as not to destroy too much meat.

I estimate that the SMK impacted at about 2800 fps.
I was a bit surprised that with that much damage that there was any bullet to exit, but at least some of it did after traversing about 2 feet of ribs, heart, lungs, and liver.

Could be why they don't reccomend target bullets for hunting
J

Any bullet will make a mess if placed in that situation so don't be to hard on the bullet.

I personally don't like using Target bullets for hunting unless it is at extreme distances.

Sierra states that the Match Kings should not be used for hunting because of there design
but many people have good results with them. (At long distances).

In my experiences they have been unpredictable and I chose to use hunting bullets because
I never know where the next shot will be.

The term controled expansion comes to mind when selecting bullets for hunting.

If you want a good "hunting" bullet for the 8mm give the 200 gr Nosler Accubond a try.
E

IMO, the SMK gave a better than estimated result!

While I do not know the weight of the bullet as it exited the deer, it DID exit!
I would not hesitate to use this bullet again especially if I can get a broadside shot.
There are many bullets that I would not recommend hitting a large bone on entry, and I would try to avoid it with these too

The Accubond has a published BC of only 0.379 which, IMO does not make it a great long range bullet.

"They start toward me almost straight on at a trot and when they clear some brush at 45 yards I shoot the first one. All 3 continue on into the woods about 30 yards to my right but mine only made it in about 5 feet!"


At 45 yards, starting in on heavy bone, and catching ribs on the way out. I am not sure the results would be much different with any bullet. Glad you didn't loose much meat. Sounds like a small change in poi and you may have lost a front 1/4 and a ham.

Sounds like a small change in poi and you may have lost a front 1/4 and a ham.

I'd rather be lucky than good any day

i shoot both in my mauser. both are accurate at 1200 yrds. i use imr 4350 52 grains shoots at 2550. the smk forsure has more energy at long range but i would not hesitate to shoot a deer with the accubond at 400 yrds however i dont think i'd use it at over 600 yrds from my mauser as it is below recommended volocity. yours should be just fine

Sorry, I missed your question.

Actually it is a .45 muzzleloader that shoots smokeless powder.

The huge advantage of not having a case is that your load is only limited by your imagination.
The disadvantage is that without a case is that it is very hard to raise pressure so duplex powder loads are sometimes needed. 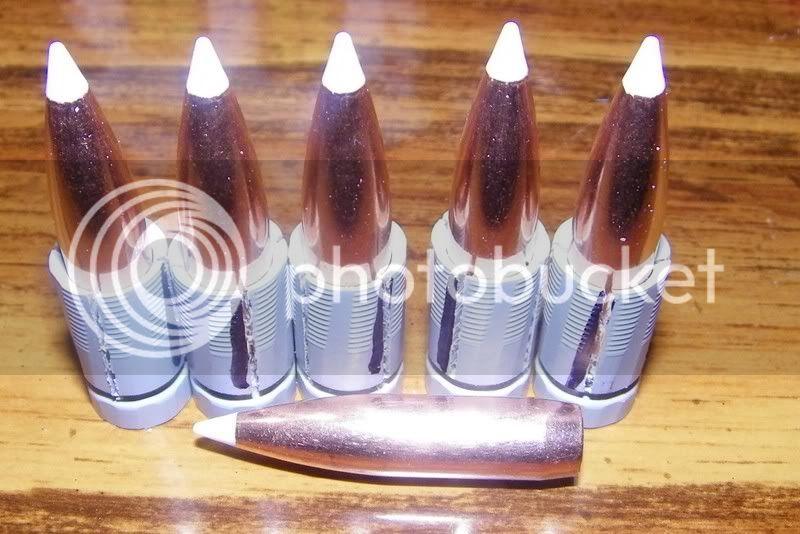 I have shot many deer with 308 win & 175 MK backed by 44 gr Varget. Would not hesitate to continue using it. It has worked perfectly for me every time.
Share:
Reddit Pinterest Tumblr WhatsApp Email Share Link

U
Berger 300 elite hunter and 33 smk at closer range