What shooting positions do you feel are the most useful in the field? I thought if I worked on shooting sticks and prone, it would be a good start. Not sure what is most practical in mountainous terrain? Would a tripod set of sticks or a single monopod stick set up be most useful?
P

A bipod is very useful and fast to use in the right terrain. I actually carry two, one extrends to 13", the other to 21". Made by Versa-Pod, they tilt and pan. Although not quite as steady as the Harris, I like these options. Alot to be said for using your pack as a rest if conditions allow. My last elk was taken with my rifle across the guides pack. I'm always try aware of the best possible position whenever I stop to glass, also ready to take advantage of any natural rests mother nature has to offer.. Try to fore see where game may appear and plan your shot accordingly.
Worst case senario for me is to be on a down slope with game on the opposite slope at the same elevation or higher. One of my spots in CO puts me in that position, thus the reason for the second bipod.

Teutonic said:
What shooting positions do you feel are the most useful in the field? I thought if I worked on shooting sticks and prone, it would be a good start. Not sure what is most practical in mountainous terrain? Would a tripod set of sticks or a single monopod stick set up be most useful?
Click to expand...

The most useful position to shoot from when hunting elk or mule deer in steep terrain is “off the knees”. Out to 300 yards someone who has mastered the technique with lots of practice is deadly. It really comes into play when there is no time to set up. In rough country given the time I shoot off my backpack in conjunction with the terrain itself.

Just get into the mountains start hunting and figure it out. It’s not brain surgery and if the terrain you hunt is fairly flat the knee thing won’t work. For flat terrain I would choose a bipod or sticks.
B

Your shooting position is kinda reflective of the kind of rifle your packing and what kinda hunting your doing.
If your making a stand and waiting for elk choose your vantage point to work best with the bipod in prone position but elk country tends to be snow country so having a set of cross sticks maybe better and puts you in a sitting position but depending on the forend of your stock it may not ride cross sticks right. I think for the long range game these two are best, forget the mono pod and get a sling and learn how to use it cause you'll spend more time wobbling around than slapping yourself into a good position with sling. I have been interested in the shooting sticks the guys at BOTW use with the rear leg to support the butt stock.
If your crashing timber, shooting elk is more like shot gunning or quick draw so pull up and bang, follow through or you will have just enough time kneel and get your sling in position.
This is the first year I have only used the prone position of a bipod and for the long range I have chosen my stand based on being able to get a good, strong position for going prone of a bipod. This is one great advantage to long range shooting, you can move around and gain the best position possible without the target having a clue.

Much as I like to shoot from prone, I don't find it very useful in the field. Now and again I can take a shot from prone, but often it's just too low given grass, brush and other obstructions that get in the way. Mostly, I've shot game from sitting. I practice it regularly, and am able to shoot very accurately from sitting. Standing... Normally I use it only for close range, but this year I branched out and took a mule deer doe at 400 yards from standing... Of course there was this wonderful dead tree to use for a rest! My buddy took this photo right after I'd shot the doe, while I was watching to see if she needed another shot. She didn't.

If I hadn't had that tree with the perfectly placed branch... I wouldn't have even tried it from standing. As it was the bullet went into her chest, pretty well trashing the heart and lungs and resulted in an instant kill. Note the sling on the rifle... My favorite aid to accuracy:

Mostly though I use sitting, and although I've used the bipod, I'm one of those sling nuts... Too much NRA Highpower shooting perhaps? For whatever reason, I've always enjoyed shooting with a sling for stability. Earlier this year I took a young mule deer buck from 175 yards, from sitting, with the rifle sling rigged as a loop on my upper arm, just like on the firing range. Put the bullet right through the buck's shoulder blade, exactly as intended.

My son often uses a tall Harris bipod to help him stabilize the rifle, particularly while sitting: 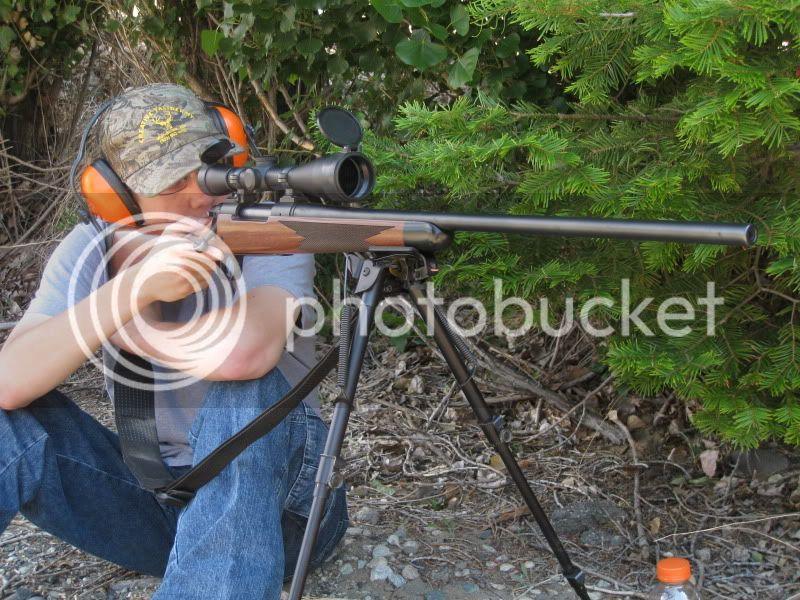 This year though, he took his mule deer doe from kneeling, a position my knees no longer tolerate:

If I can get a rest, I'll use it. The bipod is handy, but I don't like them all that much. They seem to destroy the balance of the rifle for me. I'll use them from time to time, but they're not my favorite tool. Often I'll find some way to rest the rifle on my hunting pack. That works out real well for me. If I can't get a rest, I'll do what I can with the rifle sling - and that usually works out real well for me. I'd love to take more field shots from prone, but it just seems like quite often prone simply won't work. I do a lot of shooting at the range from standing and sitting. The groups aren't nearly as good as from prone or off the bench, but it pays off during the season.

You asked specifically about elk. I used sitting, with the same loop sling to take this bull:

Sitting was the only real answer. Prone wouldn't clear the grass & low branches. Standing wasn't a good idea considering the small "window" in the branches I had to shoot through. Sitting worked perfectly, and I used the sling to stabilize the rifle.

Good report there and a great looking elk. I was all set with a bipod for my first riffle elk hunt but with 3-5" of snow I perfered the downed tree trunk to use for a rest.
C

Shooting positions for elk??
I like to position them broadside, uphill of a road! LOL
It can sure be a challenge hunting Elk.

CAM said:
Shooting positions for elk??
I like to position them broadside, uphill of a road! LOL
It can sure be a challenge hunting Elk.

If I hadn't had that tree with the perfectly placed branch... I wouldn't have even tried it from standing.

Dang, that's a big shooting stick . BTW, excellent pictures and thanks for sharing.

Yeah, I decided to leave the shooting stick there, in case I come across another deer or elk in the same place some other year. Besides, packing out the stick and the deer was asking a lot...
C

I went on my first elk hun thtis year and I learned alot. I practiced offd a bi-pod alot and off my pack prior to the hunt. I think rather than a certain position, one should just practice the fundamentals of good shooting. I have a mentaL checklist I go thru ...
1. Good sight picture
2. Good cheek weld
3. Breath control
4.Trigger Squeeze
5. Good follow thru

The position I shot from this year was on both knees leaned on a rock w/ my rifle on my pack.I actually was kind of laying prone on the rock at 40 degrees shooting uphill. Does that make sense??
E

That makes perfect sense. I am a firm believer in scrapping the range time, and just driving until I find a place that will offer me the distance that I want to practice my shooting. I shoot mostly from a taller bipod, but I also shoot alot from my pack, a rock, stump, etc.. Sure it is impressive to have a piece of paper with one little ragged hole in it, but I think it is much more impressive to have a 1" group shot in truly "field" positions.

It is essential to all of us hunters to practice under the conditions that we intend to hunt in. If you hunt in the rain, go out to the country and shoot from field positions in the rain for practice. Heck, my son and I even go out from time to time in winter storm conditions to shoot. What better way to find out the way your gun will perform under those conditions than to try it. Unless you plan to haul a shooting bench with you, you step away from the bench and learn to shoot from a natural undefined position.

I fully agree in using the terrain to your advantage as a rest. Trees, rocks, down timber are all great, add your pack and it can be even better. I have a tall bipod, but it adds too much weight to the front of the gun to make carrying comfortable. I do always carry a set of stony point collapsable shooting sticks and have made my longest elk kill to date with them, 582 yards cross canyon in the snow. The shooting sticks aren't rock solid by themselves, they require you to do your part. When time is short, a kneeling or sitting shot will always work. This years elk fell to a kneeling shot at about 150 yards and he was on the run, the result wasn't as good for my horse however, she really didn't like the noise from the muzzle break and that resulted in an extra 600 yard run to get her.
H

+1 with ejones338,
Practicing in the conditions that you will be hunting are a must. I thought I was the only crazy one to go out when it is raining hard, to practice some shots to see how they perform, I now know I am not
This has been a very useful thread. I also believe that the mental checklist is a very important thing to do no matter what position you shoot from.
I carry 2 sets of bipods, one short and one large. And I only use them when I can get set up for the shot with time and an unaware prey. If not, the backpack, sling or knees work just wright. Of course not for long range shots, that need perfect preparation, and position.
Just my thoughts.gun)
Share:
Reddit Pinterest Tumblr WhatsApp Email Share Link

B
Elk shoulders, what your shooting through!
2 3 4