I was hoping you could advise me on a scope reticle
Selection. I want to start shooting long range [1000 yds].
I use a TMR reticle on my hunting scopes but don’t know if
this is what I should get to shoot targets. I Realize a good scope is important and I have a $2000 budget. However, I don’t want to spend that much to find out I selected the wrong reticle. Any advice is greatly appreciated.
Thanks again.

Choosing a reticle is primarily a personal decision. Are you going to want to stay with mils? Or are you interested in a MOA reticle? Let's start there.

My suggestion would be to focus on getting a scope that has the reticle in the first focal plane (FFP) vs Second Focal Plane (SFP), and has turrets that you can dial. Just as important is a reticle that has subtensions (the little hash marks) with values assigned to them, so you can learn how to process Hold-offs or hold-overs. Every manufacturer has their own proprietary reticle, but you can usually find one that fits the bill. I am pretty partial to vortex, and I like the EBR 2 reticle. EBR 2c, EBR 2d, and EBR 7. I am an MOA guy, but if you are starting fresh with no particular attraction to MOA or MILRAD, do your homework and pay close attention to what the professional long range guys are using. Good luck.

No problem. Many people do. So, I think you could do better with something other than the TMR reticle. There are others which offer finer steps in between MIL marks. I would suggest taking a look at some scopes you might be interested in and see what reticle is available in them.

I have a Nightforce with the MIL-R reticle and while it does have a lot of information to offer it requires too much though to be useful.

Something like the Nightforce MIL-C or MIL-XR are easier to use IMHO.
Last edited: Nov 26, 2020

ShtrRdy said:
No problem. Many people do. So, I think you could do better with something other than the TMR reticle. There are others which offer finer steps in between MIL marks. I would suggest taking a look at some scopes you might be interested in and see what reticle is available in them.

I have a Nightforce with the MIL-R reticle and while it does have a lot of information to offer it requires too much though to be useful.

Thank you for your help. I’ll look at those. I looked at some scopes and they were confusing to me [Christmas tree reticle]. NF has an awesome reputation.
Thanks again
B

Midway is having an awesome deal on bushnell xrs 2 scopes right now. Go check it out, just bought one for 1200 bucks!

Jake,
As ShtrRdy stated, reticle selection is a personal choice. I mean no offense when I say this, but asking such a vague question without any more info is like just walking up to a group of guys (in this case 100,000+) and asking, “What truck should I buy?” You’ll get just as many opinions as anything else. You say you want to shoot 1000 yards...at what? With what? For what? You gonna use the reticle primarily for hold overs/hold off? If you have a TMR already then, unless you have had a scope altered to have that reticle, maybe you already have a capable scope. Is it a LRP, MK4, MK5, or what? You may just want to send it in for a reticle swap. Or just learn to shoot what you have now, especially if that’s what you already use on your hunting rifles. What scope do you have now? I also agree with what is post above about the reticle and turret adjustments matching in either mils or minutes. However if they don’t it isn’t the end of the world and is very useable, as it has been for decades now. We still have to teach on these systems (have several dozen in my vault), the U.S. Army is slow to keeping with the times.

Benellijake said:
I looked at some scopes and they were confusing to me [Christmas tree reticle]. NF has an awesome reputation.
Click to expand...

Nightforce and Horus have guides specifically about all the details in their reticles that you can download, but I think in general they're too cluttered up with things I won't use, so I don't have any of them. My primary hunting rifles have duplex reticles, and the old black crosses don't do anything a fancy reticle wouldn't for what I use them for. I have some of the "Christmas tree" reticles, but with FFP most of the detail is obscured anyways.

As mentioned before dialing is a good option. Getting the scope you have set up to dial for range might be a useful exercise before buying a new scope. You can see what your current reticle does and get a feel for the internal adjustment range and confirm your tracking, both of which are arguably more important than the reticle. I'd rather ignore parts of a Horus reticle in a scope that tracks perfectly than have a nice simple duplex/mil dot that I can't move the turrets on.

If you've never played around with dialing, this is a fun introduction:

Download Instructions Here Introduction: This target is calibrated for MILS, MOA or IPHY all on the same target The Ultimate Hunting Target, designed and developed by Box To Bench Precision LLC, is an advanced precision hunting target. It will test the shooter’s ability, as well as t 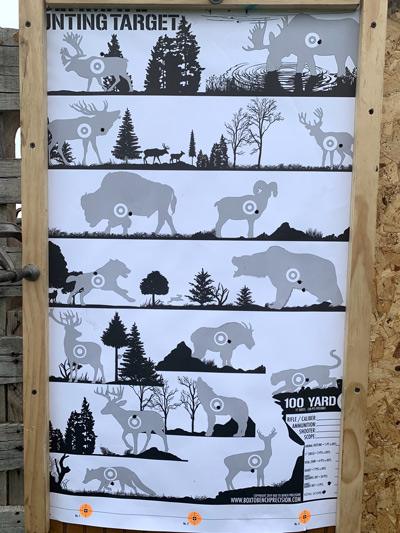 Google PRS/ELR matches near me.Go to a match check out scopes talk to people most will let you get behind their rigs and ask questions. Or you can go online and look at reticle pics.If you are going out to 1000 don't stress most scopes these days have reticles that are designed for what you want.You can call some of the scope vendors on this sight and get even more info.What reticle will work for you nobody can decide for you, as others have said.Do a little home work it will pay off in the future.
Share:
Reddit Pinterest Tumblr WhatsApp Email Share Link