Ok, I have had some lucky shots this year but this one takes the cake. Uncle B and I were out prairie doggin this weekend in a very populated dog town on a rancher's private property, and the first place we wanted to shoot just happened to be right next to the rancher's house! So, we thought it would be a good thing to start out with the 17 hmr so as to not be quite so noisy because the rancher's wife was still asleep.

There were dogs everywhere catching the first rays of sun as we setup the shooting bench and the 17 hmr. We started to shoot quite a few around 225 yards and under, until I spotted a dog way out there that just had the look of a "good target". As a joke, I started shooting at this dog with the 17 hmr even though my Leica 1200 said he was 413 yards away! I guess I just wanted to see how much drop the 17 has at that range as I had never attempted a shot so far with it. Without a drop chart to go off of and since I don't know the bc of the 17 grain vmax, I held down the post about three quarters of the way and fired.

The first shot landed about 1 foot low and a little to the right. I couldn't believe I even came close! So I loaded another round, adjusted my aim, and fired. It hit about 3 inches left and about 3 inches low! I then proceeded to shoot a few more rounds (just how many I can't remember but there was quite a pile of empties in the sand) and on the last shot, Brian and I saw the 17 grain bullet smack the p-dog right upside the head!! He flopped over and wiggled for about 2 minutes before he stopped! I couldn't believe it, a 400+ yard kill with a 17 hmr!?!? It was funny because we both actually could plainly see the bullet had impacted in the head and we both called the shot at exactly the same time!

We then proceeded to pull out the big guns and shoot many, many other p-dogs while all the while going back and looking at the .17 kill with the spotting scope just to make sure he wasn't going to get up and dust himself off and run down his hole! He never did but after an hour or two, a golden eagle that had been watching all the festivities from the top of a "moon dirt" hill decided to swoop down and have another p-dog for lunch! I didn't want my trophy turned into bird droppings so I ran out to the dog as fast as I could go to scare the eagle off but I was too late. The bird had flown off and there was no sign of my dog where he had died.

I was so bummed that he had gotten away with my trophy, but then I looked down the closest hole to where he had been and sure enough, there was the remains of my dog!

In about 30 seconds the eagle had split it open from one end to the other and had eaten most of it! Then when I scared him by running towards him, the eagle dropped the remains of the dog into a hole as he took off.

I reached in and pulled him out (with a paper towell so as to not get what disease 7mmrhb had) and I could plainly see where the 17 hit him. The bullet actually went right into his eye and didn't even have enough energy to break the eye socket! It then glanced off downwards through his jaw and exited by his chin! It was amazing. It definetly would not have killed him at that range unless it hit the head.

That 17 hmr is an amazing little round. Definetly in the top 5 most fun guns I have ever shot. And who says it's not a long range cartridge!? I just pulled off a shot with it on a p-dog farther than most guys on other forums will shoot their 7 mags at targets the size of Buicks!

Here is the victim. Notice how the white tail p-dogs we have in Utah don't really make mounds. They just make holes. 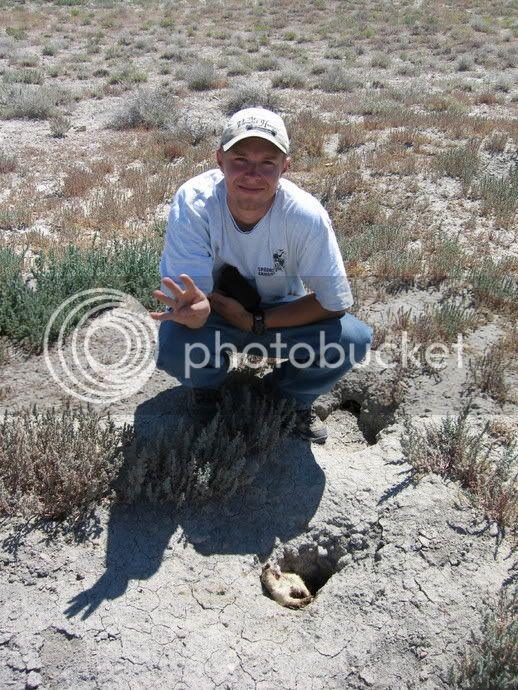 The small caliber guns are a lot of fun. The story about the eagle was funny. When a golden eagle gets its mind set upon something it does not have much sense.
B

Great story and fine shootin' as usual. We had a turkey vulture come down and nibble on the kills before. It must take alot of nerve to land in that barage of bullets!!
W

Great shot goodgrouper!!!!! My longest kill with the 17HMR was around 275yrds, and I thought that was far. Goodgrouper, I just ordered my David Tubbs Bearing Surface Comparator (BSC) and Meplat uniformers (BMU) for my 338 and 6.5. How much should I cut of the top of the bullet, I will be using 142MK for 6.5 and 300MK for my 338. Also, what is the best tool to measure the O.A.L. of my bullets. Any help would be great!!! Thanks!! Wildcat.

Just barely take some off, too much will degrade your bc drasticly. All you need to do is just get the high side down level and none more.


Measure every bullet with the bsc before seating and then measure each loaded round afterwards with a Stoney point bullet seating depth tool. If some seat longer, put them aside and turn your mic down and seat them however much deeper they need to be to match the others.

ANother little hint I will throw in:
Buy the 300 grain MK in the 500 count box. OTherwise you will not have enough bullets that are the same length to really get in a good shooting session on live varmints!

The 142 Mk's seem to be about 1000 times better in every way, but you must still measure bearing surface. /ubbthreads/images/graemlins/wink.gif
E

GG, what part of UT. do you live in. I spoke with "Bob" at Sportsman's a while back, and mentioned you I believe. Next month is the Kimberly Kaboom, going? Good story!!
W

Goodgrouper, this information will help tremendously!! Now, I will have to learn how to use the BCS and the meplat uniformer. This type of reloading (Bullet Measuring) will be new to me, and I am looking forward to learning more about it. After mearsuring the bullets, with the BCS, do you separate them, and only load the ones that are the same mearsurement? Could you give me a sample of the best way to do this. I kind of have an idea, but I would like to hear any suggestions you can offer. Thanks for the help!!!!!! Wildcat.
G

Thanks.
I live in Provo, so if you stopped in the Provo SW, you talked to Robert (also known as Old Bear). He has been known to tell a story or two about our adventures! /ubbthreads/images/graemlins/wink.gif

I have several hunts coming up but I will try to make the Kaboom. Hopefully they have the rules changed a bit since the last one! /ubbthreads/images/graemlins/wink.gif
G

[ QUOTE ]
After mearsuring the bullets, with the BCS, do you separate them, and only load the ones that are the same mearsurement

I think the best way to mark them is to take a sharpie and make different symbols on the case heads to identify certian length bullets. Then I know all I have to do is shoot the bullets in the ammo box with the same symbol.
You must log in or register to reply here.
Share:
Reddit Pinterest Tumblr WhatsApp Email Link