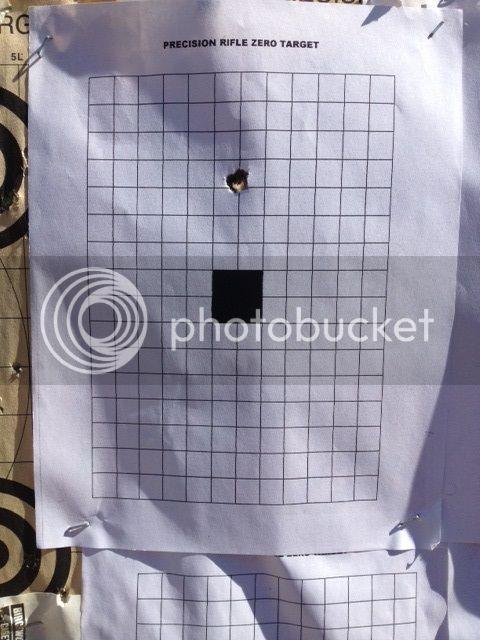 Finally got the NXS 5.5x22x56 MOAR, zero-stop installed on my new 7mag built by Dave Bruno. Loaded some "break-in" loads while increasing powder charge. First time to shoot this rifle was today.

Load:
168 Berger hunting VLD seated 0.010 off the lands, new Winchester brass, Federal 215M primers. I sent the sizer die back to manufacturer to hone neck 0.003 smaller than loaded dummy round. I resize all new brass with expander button, then again without to reduce runout. I lube inside neck with “Froggy’s” lube (graphite suspended in alcohol), prior to seating bullets for ease of release but good neck tension.

Took the rifle out today for first session. Barrel break-in is arguable as to its necessity. I do it because it makes me feel warm and fuzzy. Shots 1-5 were test rounds for max charge of Hodgdon Retumbo. Shots 6-8 were 72 grains, which produced a 1/2" group, then shots 9-11 are pictured above.

I shot and cleaned after each of the first 5 but could see no trace of copper through the muzzle in the sunlight after any shot. Then I’d shoot the 3 shot groups and clean. Barrel allowed to cool between each shot and group.

This is the first case I’ve ever run into when the barrel, NEW, was basically already “broken-in.” It simply didn’t copper foul from the muzzle view. Will retest loads at range Thursday but this, for now, is my working load for Colorado next month. This 3 shot group measures just under 1/4 minute.

Took the new 6.5-284 out today also with 140 Berger VLDs and H4831SC, same process. No groups were over 1" but it fouled pretty bad but was easy to clean. It has a Bartlein bbl. The H4831SC load is promising as there was no vert/horiz stringing.

I still need to add powder to find max load. Will have time Thursday to play with it as well.

2 of the 4 rifles are going to CO next month on my mule deer hunt. The 7mag is one for sure.
D

Oh, the target was only 100 yards. We didn't have time to move to 200 which is the longest I can shoot at this club here in Ohio. The 2.5" high at 100 is where I prefer to start. But actually, the group is 1/2" left. I was aiming at the bottom right corner of the 1" black square. Scope was adjusted for next range session.

That's great shooting! I would surely take that rifle to CO. I am interested to see how your 280 shoots and with what load. Thanks for posting.

If you can, please post a picture of your rifles, they sound very sweet!!!!

You'll be traveling with confidence for sure!

Am enjoying the bbl I got from you. It'll pretty much shoot with your 7. Elk season doesn't start for me till the 25th (cow tag). Son has the bull tag. We've been after a couple of little bulls back of the house.

Still have that WC872. I've gotta get around to getting my sister in gear.
D

The 280: Since I have a ton of 150 Btips on hand I'm working with those first just to see what happens. If for some reason I change my mind, I'll use the "ton" of Barnes TSX or TTSX I have on hand in 140 grain.

Roy, I recently found out a buddy of mine from college lives in Sandpoint. Planning a trip there next summer. I told the family to keep an open mind because we are tired of living in Ohio for many reasons and I really want to move and they seem open to it.

Glad you like the barrel. The powder is here ready for your sister to take off my hands for you.
2

That's great that the 168's worked in a 9 twist. Myself and a buddy both built 7 mags with the intent of shooting them but after we both tried a few hundred shots each we gave up. Then switched to 180's and all was good. Berger says 1-10 or faster for the 168's but we had no luck at all for anything consistent. Definately no groups like yours. Stretch it out bit and let us know how it shoots further out
D

In the next 2 weeks I will take it to 500 yards. A buddy from the gym is a member of a range I have not heard of. It's about an hour away but will be worth it. Will take all 4 new rifles. More Talleys arrived today, and Leica and Zeiss scopes will arrive tomorrow.

No one asked but my opinion on the Leica scopes is they are second to none unless you are comparing to S&B.

I'm going to sell off all of my Leupold 4.5x14x40 VX-IIIs (5 total) and replace them with Leica. I'll probably start a post for that scope sale soon.
2

I tried a Swarovski 3-18 scope and then similar to you I ditched all my leupolds for swaro's. My long range rifles wear nightforce though. If you haven't yet you should maybe take a look at swarovski's brx/brh reticles. I found them much thinner and more suited to long range shooting compared to the ziess z series reticles.
D

My Zeiss will have standard Z reticles. I'll use whatever turret travel I have available with the target turret installed.

The Leica has their latest BDC reticle and I'll use it on the 6.5-284 and test drive it. The 30mm tube helps with dial in as well.

I bought into the Leupold hype in the early 90s. Was a mistake for me. I ditched a good 4x12 Nikon that was more clear and I still say, to this day, for me that Nikon glass is better than Leupold. I bought 9 identical Leupold VX-IIIs 4.5x14x40s. I wasn't impressed then and am not now. Their glass is decent but not even in the same realm as Zeiss, Leica, NF, or Swaro.

In WY some years ago, my brother and I compared his $300 Nikon to my $500 Leupolds. The clarity of his Nikon made me sick that I spent a ton of money for glass that my eyes were not fond of.
7

Derek M. said:
Oh, the target was only 100 yards. We didn't have time to move to 200 which is the longest I can shoot at this club here in Ohio. The 2.5" high at 100 is where I prefer to start. But actually, the group is 1/2" left. I was aiming at the bottom right corner of the 1" black square. Scope was adjusted for next range session.
Click to expand...

Derek, great to hear from you again, and nice job on the new rig, and it's accuracy. That's certainly a great start. I know what you mean about the barrel that dosen't foul. I recently bought a STW with a Schneider barrel, and it like you said" simply dosen't foul". I can easily shoot this thing 25-30 times before it even begins to show signs of needing to cleaned, and then it cleans with a half a dozen patches, and done.
That's fantastic accuracy you've got going on there. WOW. Congrats on the new build, and good luck on your hunt. Take care!
D

Thank you 7STW. I've had 2 other barrels clean up very easy, but never like this Krieger. Guess the real test will be when I take the Krieger barreled 270 out. If it does the same thing, can you guess what barrels I'll be leaning towards for all future rifles?

My Pac-Nor barrel is on my 30.06 and it cleaned up so very easily but still fouled. The other barrel that didn't foul hardly at all after shot #8 was my Broughton-Richards barrel.

When I get my 338-300 back from Hart, I'm going to do just as they recommend and shoot it w/o any cleaning process. Looking fwd to seeing the effects if any.
Share:
Reddit Pinterest Tumblr WhatsApp Email Share Link