Just got back from NM on a great hunt. Me & my wife were on this hunt. Can't think of a better way to enjoy the outdoors, especially out west in God's Country! We did some scouting & found some elk in some areas of dark timber bordering a meadow with a small pond up in the timber. The 1st morning we saw some cows ,but the majority of the herd was above us & heading into the timber for the day. Tons of sign & tracks ,so we felt confident they would come through in the evening. We were just hoping it would be before dark. Most of the rut was through with a little bugling in the 1st minutes of light. We went back in that evening & found a good clearing going to the meadows & some quakies. We set up behind a big fallen tree with my wife being about 30 feet or so away. It was getting dark in the timber where we were & I thought I heard some cows talking below us,so was looking to my back. About that time I turned around a bull was walking right at us. 60 yards & closing. My wife had seen him while I was looking behind me & when I looked at her to let her know the bull was there she was waving her hand behind the log we were hiding beihnd like crazy. I was trying to size him up for points,broken tines, etc ,all the while he is coming our way. At about 50 yrds I am saying to myself ,do I shoot or let him go hoping for a better bull. He stopped & turned a little where I had an angle shot into his front left shoulder. Decided to let it fly . 1st shot he looked like the hammer of Thor hit him squared . He just kind of hunched up & stood there like he was drunk,kinda wobbling. I bolted in another round & shot him in almost the exact hole as the 1st round. When he fell right after that shot it wasn't like his legs folded etc, he just fell straight over like a tree being cut. He is my 1st Bull & to share that moment with my GREAT Wife[that puts up with my sorry ***] was a fabulous feeling. He is a 7X6 with a broken tine that would have made him a 7X7. He scored 304 3/8. He was an old bull by his teeth. The front teeth were wore down yellowed & had 1 tooth missing . His ivory on one side was barely past the gum & the other was to the gumline. 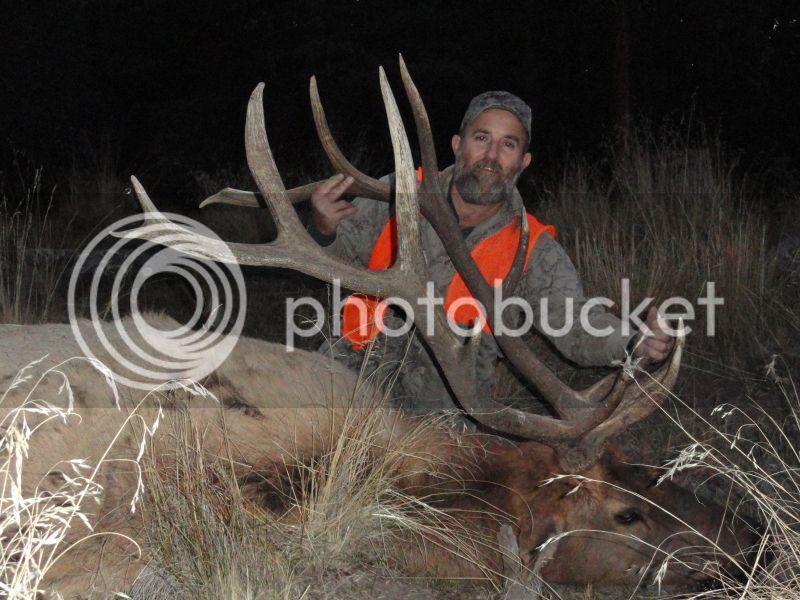 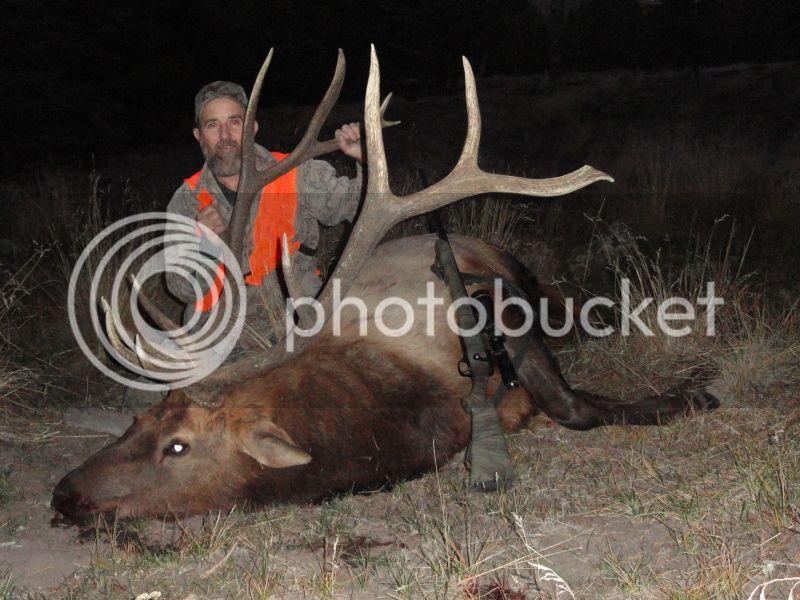 Congrats and nice job: I've had the good fortune of taking more than my share of elk and each and everyone is special in some way.

Very nice! Thanks for sharing. What could be better?
I

Congrats. You are both LUCKY to have each other to enjoy the gift of GOD like that.
S

That is awesome! Congrats. Yes, it is so wonderful to share that experience with the one you love! My hubby went big game hunting with me for the first time, and I helped him get his first antelope. I could not have been more thrilled. That is one beautiful old bull!
Share:
Reddit Pinterest Tumblr WhatsApp Email Share Link

A
CO 1st Season Bull and my first elk ever!!