Well, I have been looking to get a big bore lever action for several years and finally decided on the one I personally feel is the most attractive offered today, the stainless/laminated Marlin M1895MXLR. I was torn between several chamberings, namely the 338 Marlin Express, 444 Marlin and 450 Marlin. I was going to get a 338 ME but when I finally decided to get one headed my way, they were out of stock with all my distributors so I told myself that a lever action has no purpose for over 200 yard shooting so why not get the hammer and ordered the big 450 Marlin.

The rifle arrived and I installed a rail base and mounted a Burris 2-7x 35mm Fullfield II with Ballistic Plex reticle in Burris QD rings.

I also could not find any brass for the 450 Marlin so I ordered in 5 boxes of Hornady Leverevolution factory ammo loaded with the 325 gr Flex Tip bullet. They were supposed to be loaded to 2225 fps. Running a few of them over the chrono showed they were a bit off this but close at 2170 fps. It will be easy to match advertised specs with handloads and I have talked with several that are loading this bullet to a full 2300 fps.

Yesterday I had to test a couple custom rifles along with my Raptor prototype so I threw the lever gun in the truck as well. After testing the long range hammers at 1400 yards, I set up a paper target at 100 yards. I will admit, it was a bit refreshing to play with the big bore at close range. It took two shots to get close to where I wanted. One more slight scope adjustment and I took three shots. I was frankly AMAZED when I saw what appeared to be a 1/2" clover leaf perfectly centered 1.5" above the aiming point. I had to walk up to make sure and sure enough, the Marlin big bore had just shot a legit 3 shot, sub 1/2" ctc group at 100 yards.....

I ran the rough numbers through exbal and estimated some hold over numbers for the Ballistic Plex reticle. I then found a small target rock at 225 yards. The recommended hold was half way between the 2nd and 3rd hold lines. As I recovered from recoil, I saw the 4" diameter rock rolling down the steep sidehill. As it stopped, I sent another one at the rock and again hit the rock solidly!!! I was getting most impressed with the levergun.

Next I found another target rock of the same size at 308 yards. The predicted hold was half way between the 3rd and 4th lines on the ballistic reticle. This time I did not hit the target rock, the shot landed just a couple inches below the rocks bottom line. Cranked in another round and took the same hold, I was amazed to see the first impact crater just get a bit bigger!!! Cranked another round in and held slightly higher and dusted the rock!!!

With this sight in zero, about the farthest I can reach with this reticle is 350 yards so I found another target rock at this distance. I held the bottom post on the target rock and let one fly, Again, it landed JUST low, within a couple inches of point of aim. A quick second shot landed within 3" of the first but to the right.

Now I do not have alot of experience with lever guns except for sub 200 yard shooting but I have never shot a lever gun that would group in the 3/4 moa range out to 350 yards.....

In all honesty, I was simply blown away by the performance of this rifle. Recoil, while noticable is not uncomfortable in any way as the rifle as a great Decelerator recoil pad. Even though the rifle is less then 8 lbs ready to shoot, its still comfortable to shoot, more like a push then a kick in the shoulder.

Have to admit, I am a bit excited to try this rifle and load on a whitetail this coming fall!!! Not overly long range but considering the weapon being used, not to bad. Makes me wonder what the 338 Marlin Express could be capable of. If they shoot as well as this rifle, they would be more then capable of big game hunting out past 1/4 mile.

Cudos to Marlin!!! If anyone wants a big bore lever action, I would recommend the Marlin 1895MXLR in 450 Marlin.
A

my brother-in-law and I have shot his 45-70 marlin guide gun out to 325 yards with nothing but kentucy windage an been impressed. on the third shot we nialed a 8x10 rock at 325. not bad for kentucky windage (esspecially because we never use hold over). very acurate rifles for a lever gun.
I

I have a 1895G in 450 Marlin one of the rare factory ported modles. I have it upgraded with XS sights and a Pachmar decalarator pad. I seen stars the first time I shot it as I had the short strait stock a little under my nose. I have never shot it past 50 yards now I want to try. I am putting the picitinty rail on soon and going to mout up my aimpoint.
L

I have a 1895G in 450 Marlin one of the rare factory ported modles. I have it upgraded with XS sights and a Pachmar decalarator pad. I seen stars the first time I shot it as I had the short strait stock a little under my nose. I have never shot it past 50 yards now I want to try. I am putting the picitinty rail on soon and going to mout up my aimpoint.
Click to expand...

Even with the ports it nailed ya? Sounds interesting to say the least.

Congratulations on your new gun. Sounds like a winner right out of the box. Thanks for the detailed writeup.

If I ever get tired of the long range precision type rifles and shooting, I have often thought about a lever gun for hunting. Or even a muzzle loader. I don't know that I will tire, but more and more often I find my self looking at my old 30-30 in the safe. I like the Idea of the open sights. By the time I get to really wanting to hunt a rifle like that my eyes will probably not let me. Every year my arms seem just a little shorter when I am reading.

ahhh the eyes...know what ya mean. Got to the point about 12 years ago that I couldn't hold something as simple as a menu far enough away to read it. So I broke down and went with the glasses, only need them for reading thank goodness.

I love mine out of the Marlin Custom Shop: 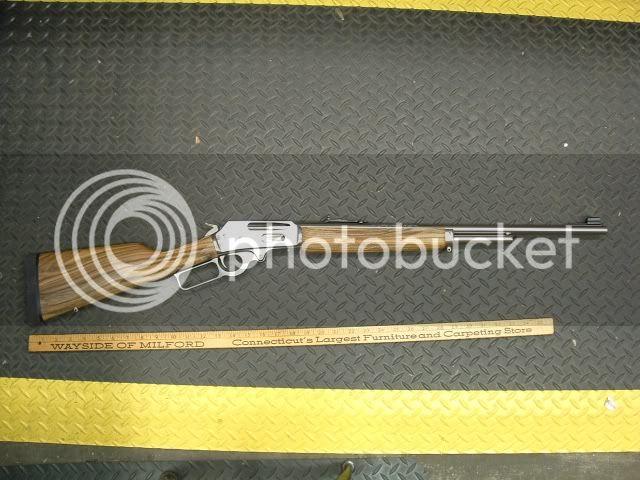 Boss Hoss, nice looking rig. If you don't mind me asking what wood is the stock made of?
S

Kirby,
Not suprised at the accuracy of your big bore Marlin as I have heard many similar stories. I bought a Marlin 1895SS .45/70 topped with a Burris 1.75-5 at the Tulsa gun show in the early 90's. The guy I bought it from had some handloads that he claimed shot well and gave me the load recipe. Well, the first 3 300 gr HP's landed exactly center bull and the group measured 0.47" at 100 yards. It continues to turn in that type of accuracy so I have never bothered to try a different load. Deer and hogs seem to be quite impressed with it as well.
Glad to hear your big bore is a tack driver. Gotta love those Marlins!

Chas1 said:
Boss Hoss, nice looking rig. If you don't mind me asking what wood is the stock made of?
Click to expand...

It is Screwbean Mesquite and I forgot that that one is a 308 Marlin opppssss. Will put the pic of the big one up later which is the only one of its kind built by Marlin (as is the 308 as well) and not somebody else.

Also found it rather funny that when they ran my blanks through thier process the screwbean checkered just like the soft walnut they run. Carbide is tougher than any wood LOL.
N

Kirby, I have an XLR in 45/70 & I would have never believed a lever gun could shoot like that!!
R

Bought a marlin 1895m in the 450 the first year out and topped it off with a 4x lupy very accurate although I only shoot at about 100 yards. I love letting my friends shoot it as they usually end up leaking a red fluid after words. Great on woodchucks.
robster
C