Btw--ignore my "hat"--that is what happens when you are exhausted and try to get a polar fleece hood as far off your head as you can, but yet keep it on so as to not get shot

(well about 2"above POA) 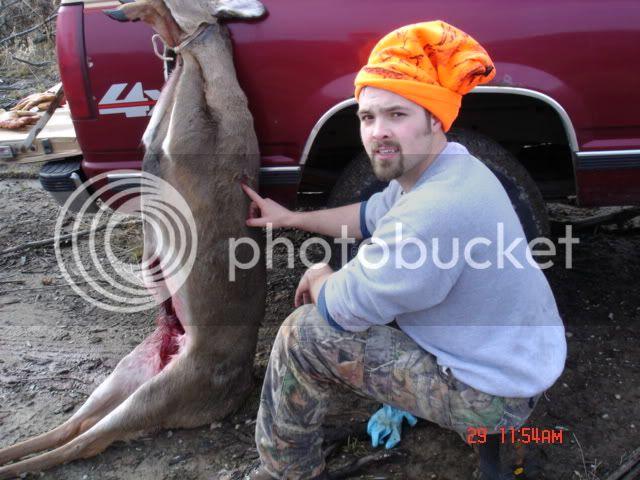 i put the shot where it should have been, but lack of expansion (drilled a hole thru the lung then countinued out the bottom of the ribs) meant we had to watch her for AWHILE before she finally died!! 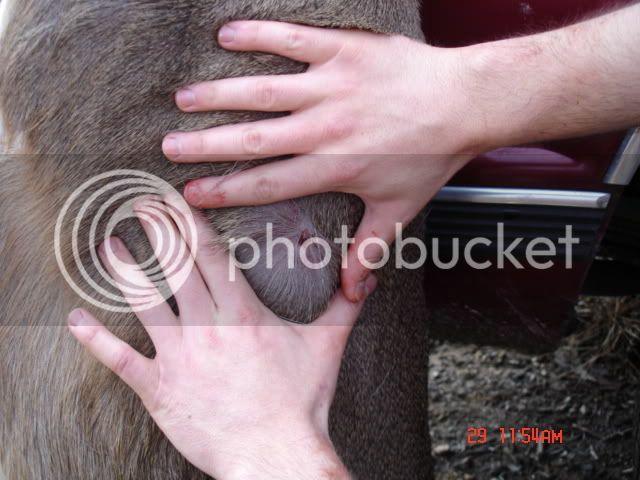 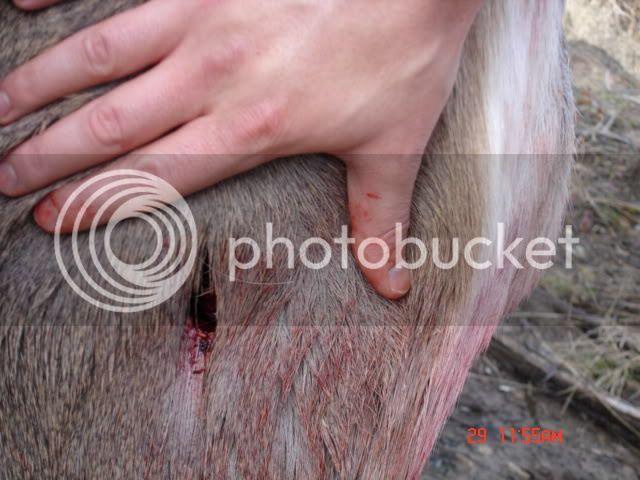 group of 3 does show up about 800yds--they saunter up to about 770 and i click up to shoot, but not a good shot present.

20 minutes later...
Group of five does show up about the same distance but in a different area. i picked the one with the least brush around her and locked on--was still clicked to 775 so i took off a half-minute or so (16MOA up)

she stood about broadside (more angled than i thought) touched off the shot and she just humped up for about 1 minute(shoulda double tapped her, and would have had i known the shot was perfect)

so we watched as she slowly waivered and toppled over, but she continued to waiver and periodically stumble for a half hour or so till she finally stopped moving (seemed like an hour, but might have been 15 minutes)

so as i walked up to her (eventually) i saw intestines out the exit wound--thought "man, i better not have gut shot her!!"

well, i didnt, the bullet just angled back further than i thought it should have and sucked out some entrails on its way.

she never let out a noise and never ran, so she was obviously neither scared or in pain.

I love it when a plan comes together

p.s. So--im not sure quite what the bullet did, but it didnt hit any bone until it exited thru a rib. If it had hit a rib on entry it may have been totally different. 1 bullet isnt enough to make a valid decision about performance IMO--though it got me the deer

Great story and congrats. What you experienced is pretty much what I would expect from the cartridge and bullet combo. The exit wound is about 1 1/2" (?) again what I would expect. No you don't pick them off their feet at that range.

Although a lot closer (335yds) my deer did a similar walkabout staggering. I double tapped him and that was that. Your shot probably went a bit far back so didn't completely vaporise the lungs. She would have gone down much quicker had that happened.

My thought is that if I take a shot and hit, I keep shooting until the animal is down.

Not sure if a bigger cal/heavier bullet would have drop it any faster. Love to hear feedback from those hunting with the big boomers.

Nice shot. I have seen several animals hit with the smaller smk's 6.5 and smaller. I have yet to see anything that I would consider good bullet and terminal performance. I switched to the Hornady 140 Amax for this reason it shoots very well in my 260 and still expands well at lower velocities. You might try it. Your shot placement couldn't have been much better. It seems that the biggest issue for most LR Hunters is bullet performance. The combo of accuracy and terminal performance. Happy hunting.

Mike, thanks-- I luv pics

jerry--had i known the shot was perfect, i would have double tapped--next time i will

Shawn--was just exercising the legs on my 1K BR gun--im not gonna switch anything quite yet based on 1 bullet and 1 animal.

Hard to be sure from the pics, but it looks like that bullet must have passaged right through the centre of the chest cavity. Makes the observed reaction to shot sound weird (I don't mean that judgementally, I just mean that I would have guessed a far less satisfactory hit based on the observed reaction to shot that you described. Humping up etc. would have me certain that the shot was a gut hit

But then again you chaps are taking on beasts at about double my personal range limit (and, therefore, experience).

Do you attribute the peculiar reaction (to what looks like a spot-on and -normally-quickly lethal hit) to the reduced vel/ energy at the range of this shot, or the actual performance of the projectile itself?

Impressive shot; but you also can't ignore a hat like that. It's...er...impressive too

PS. What were the wind conditions?

I hope you don't think I was criticising JB; I wasn't! Just asking a question to further my understanding. I'd have been happy with JB's shot placement at 200m -let alone 700+yds!
I just asked because it's beyond my experience to have an animal stay alive for as long as JB described with such a transecting chest shot (90% of my hunting has been with Nosler BTs). Just curious if JB -or anyone else- had a pet theory as to why. Strikes me that -with that wound path- bullet performance must have been less destructive than one might choose -but I don't know what is considered 'normal performance' at 700+yds.

As a eg; I have a colleague with a big pucker of missing flesh 2 inches right of his left nipple, with a corresponding pucker 2 inches left of his spine. A 7.62 FMJ (he acquired this during the South Atlantic unpleasantness in 1982). The apparent wound path looks unsurvivable -but he's fine now. His reaction to the shot: "I was running forward and then I found myself sitting down, but didn't know why". Don't think he'd be around if that round had expanded / fragmented.
Just struck me that, on this occasion, JB's bullet seemed to give FMJ type performance; but -curiously to me- cause a reaction to shot (based on my hunting experience of expanding bullets at shorter range) that I would have misinterpreted as a gut shot. Is that type of reaction to shot typical of deer chest hit at 700yds+ with SMKs? -I've no idea! -just curious that's all

This long range game is a funny thing, to do it right, we have to be able to sit on our rifles for long periods of time just waiting for that 5 to 10 second window that will allow us a clean, clear shot at the vitals without the fear of the animal moving during the shot.

Most that think long range hunting is a lazy mans sport certainly do not know the level of mental strength it takes to be a proficient killer at long range. Anyone can hit a target at long range with quality gear and a little practice.

It takes a true long range hunter to slip a single bullet through the vitals of a game animal at long range.

It take even more of a long range hunter to let animals walk even though they are right there in front of you. Still recognizing that your first group of does did not offer a quality shot is a huge thing, especially when your reved up looking for that first long range kill after all the practice.

Patients is a virtue here and you have it. Respect for the game is what makes one pull off a shot when they know it is risky.

There will always be another chance and in your case, the same day.

You did eveything correct, you practiced, waited and made a fine "called" shot meaning you knew where the bullet would land.

Congrats again. Only thing that could be improved upon is bullet performance but clearly your deer is dead with one shot, hard to argue to hard against that.

Just goes to show you that its shot placement above all else that kills animals.

I was not referring to your post in any way. I do not think you were taking a hard line at JB at all in any way.

I would agree that the bullet performance would have created some reason to doubt the shot placement but that is a bullet issue not a shot plaement issue as we all agree.

I never read anything in your post to think you were flaming on JB.

Just a bunch of guys talking hunting and bullet performance on game is what it sounds like to me!!

50,
You pipped me by 2 minutes! See my post just before your last

I would agree the heart is a very tasty treat!!!

I doubt we could post twice simultaneously if we tried to do it on purpose!

Probably not but 1 minute off os as close as we can tell I suppose!!

As relayed by Brown Dog I'd have suspected a round to the groceries by the "humped up" stance and this may well have been caused by mechanism that produced the protruding intestines. The intestines protruding without "apparent" damage would seem to me to indicate the diaphragm was torn/ruptured (wound channel dynamics perhaps) just at the exit wound--the intestines were probably forced through the ruptured diaphragm and out the exit wound by the reaction and perhaps subsequent tensing of the abdominal muscles. Probably also a good deal of the intestines entered and remained in the pleural cavity. The actual mechanism that causes the "humped up" response is not known to me but the trauma to the diaphragm may be the cause. Recall that animals breath in a different manner/rhythm than humans, they have a gait related cycle also and perhaps the expiratory cycle, the "humped" recoil position is caused by this exhale need/desire. They don't/she didn't move significantly after the event so they don't get into the extention position or gaited inhale cycle, just stuck in the gaited exhale position but breathing. (I do believe this is beyond the scope/realm of their experience and they really are stuck in a "what the hell is happening and if I stand still maybe it'll go away".)

The entrance wound in a little high and forward IMHO and the critter was obviously angled as evidenced by the exit wound so I also suspect, as did others, that the near side lung was not damaged or was only slightly damaged. The intestines may have stopped/stoppered the exit wound preventing the introduction of air into the pleural space prevented the lungs from collapsing as quickly as is usually seen in through-and-through chest wounds. The entrance wound being small, high and perhaps through more the just chest wall muscle, could have self sealed.

The critter, probably as described, felt no pain, shock is a handy and merciful thing, and eventually bled out or suffocated after losing consciousness.

The other deer didn't move as they weren't aware of any danger...nothing obviously wrong other than the odd stance, but no flight response, of the soon to be dead doe. This is common to seen when shooting deer at extended distances or from a well hidden place. If there is no-one to signal danger, as in "run away", why leave??

People are a bit lucky in design when compared to quadruped animals. In normal face-on or back-to stance we present a difficult shot for a double lung unlike a deer with it's supple neck and common side-to stance. We can become a one lunger for a bit as your friend shows and if the hole(s) are plugged and no major vascular damage is present we often survive. Put a round through both lungs, and perhaps the intervening plumbing and there's a much bigger problem.


Just my guess(es) and opinion... I've been wrong before.