When I turned "50" my wife gave me the green light to do a Aoudad hunt in Texas.. I live in New Mexico so Aoudad hunting was nothing new and I had killed a couple 28 inch rams, but I wanted to reach the 30" mark.. After a lot of searching and talking with other hunters I chose a Outfitter with a good reputation. I talked my two brothers, and a friend in to going with.
As luck would have it the four days that we were going to hunt it called for wind and Rain.. If you have hunted Aoudad sheep before you know that these sheep tend to "Hunker Down" when it rains.. It hadn't rained in this area of Texas in months and hardly ever in the area that we were hunting.. Just bad luck I guess.

Day 2: Wind and Rain we saw 10 sheep and hiked for literally 8 hours.. Again no shooters, Not really the size of sheep heards we imagined in this part of Texas.

Day 3: Heavy rain.. We decided to just glass from the road and hope for the best as it was raining way to hard to be hiking on slick rock. At the end of the day we turned a corner on our way back to camp and spotted a lone Ram running up the slick rock right from the road.. My brother grabbed his Lane precision 300 Win mag and let the 215 Berger fly. first shot was a little high as the angle was steep. Second shot sent that big ram rolling for the Road.. First time ever the guide had killed a Ram from the road.. We felt very lucky.. When we got back to camp the guide announces," we are done hunting tomorrow at noon. We had all planed on a 4 day hunt and we didn't know that they normally quit at noon on the fourth day.. We also didn't know that the first day was just travel to the ranch and quick look around before dark. The outfitter didn't even meet up with us on the first day until 1200 noon and we had a 3.5 hour drive into sheep country on a dirt road.. Well, life and hunting is full of suprises..
Day 4: We woke up to rain again, just light enough rain that we talked the guide into making one last ditch effort to hike to the top of the mountain and see if any sheep had moved in. We quickly spotted 2 Ewes peaking over the rim just as we were getting close to the top. Excitement mounted as we though there had to be more sheep on the other side. Just as we got near the top the "Fog" moved in so thick you couldn't see 25 feet in front of you. We continued to the top and set up where we thought the sheep might be. After waiting for what seemed hours, the fog dissipated just enough to see 30 sheep on the far side hill. Realizing my brother had never shot a sheep I let him have the chance. We grabbed the BR2 range finder and quickly tried to range.. We kept getting eroneous numbers as the range finder was struggling with such thick fog.. It finally after 25 attempts was able to give us a yardage and the fog was starting to thicken again. 612 yards, 8.5 MOA My brother got on his 30 Nosler and dialed, He let the ole 215 Berger fly and the ram hit the dirt and started sliding down the hill. We quickly made our way to the ram as the fog closed in.. The rest of the sheep ran up and over the pass. I was a little relieved that my brothers had killed because it is a lot of money and it was my idea.. ha ha.. We started caping the ram and I said to the guide lets just head up to the pass and see what we can in the fog.. My younger brother joined in and we made it to the pass.. It was sheer fog and we couldn't see 15 feet, so we just followed in the general direction of the sheep. Out of the Fog we heard BAAA.. Big, little , Medium BAAA. The sheep were all around us and just couldn't see us. Problem, we couldn't see them either.. We decided to just sit still for about 20 minutes and all of a sudden a small window opened, and I could see a ram feeding 60 yards in front of me. One high shoulder shot from the ole 33 Nosler and 250 Berger elite hunter dropped that ole boy in his tracks. The whole mountain came alive.. we could hear sheep running everywhere. As the fog began to clear we saw at least 150 sheep running over the far ridge, not counting the ones that left before the fog cleared. We were very fortunate, and blessed to harvest 3 nice rams considering the conditions.

Food for thought..
1. Ask your outfitter when they advertise 4 days hunting if that is 4 full days.. you won't get any surprises.
2. Make sure your boots are broke in. Our fourth hunter thought that even though great boots, new Kennetreks didn't need much breaking in.. He couldn't hike the last two days and ruined his hunt. Worst open blisters I had ever seen. Lots of money and time down the drain.
3. Make sure when you recruit people to go hunt they understand the weather can crap the whole show. Even in Texas in Jan..
4. Even when conditions are crap, Keep hunting and trying. You can't ever shoot one if you aren't out hunting.. Your guide might even think your a Dope but, keep getting out there and you might get lucky. This wasn't high country and snow, it was desert and rain, Always listen to the guide they know the country but, you might have to highly encourage when conditions are crap. Guides are people too, and they don't generally like hunting in crap conditions.
5. Just be willing to enjoy the hunt even if you don't harvest. Had the best time with family and friend. Made some memories of a lifetime.
6. If you wear glasses bring some lens cleaning wipes. When your chamois gets wet it won't clean your glasses. Most people will never see rain when hunting sheep on the border of Mexico but, As I found out it can happen.. I have hunted plenty of sheep in NM in some crazy country but you can never be too prepared.

Ended up with good Rams 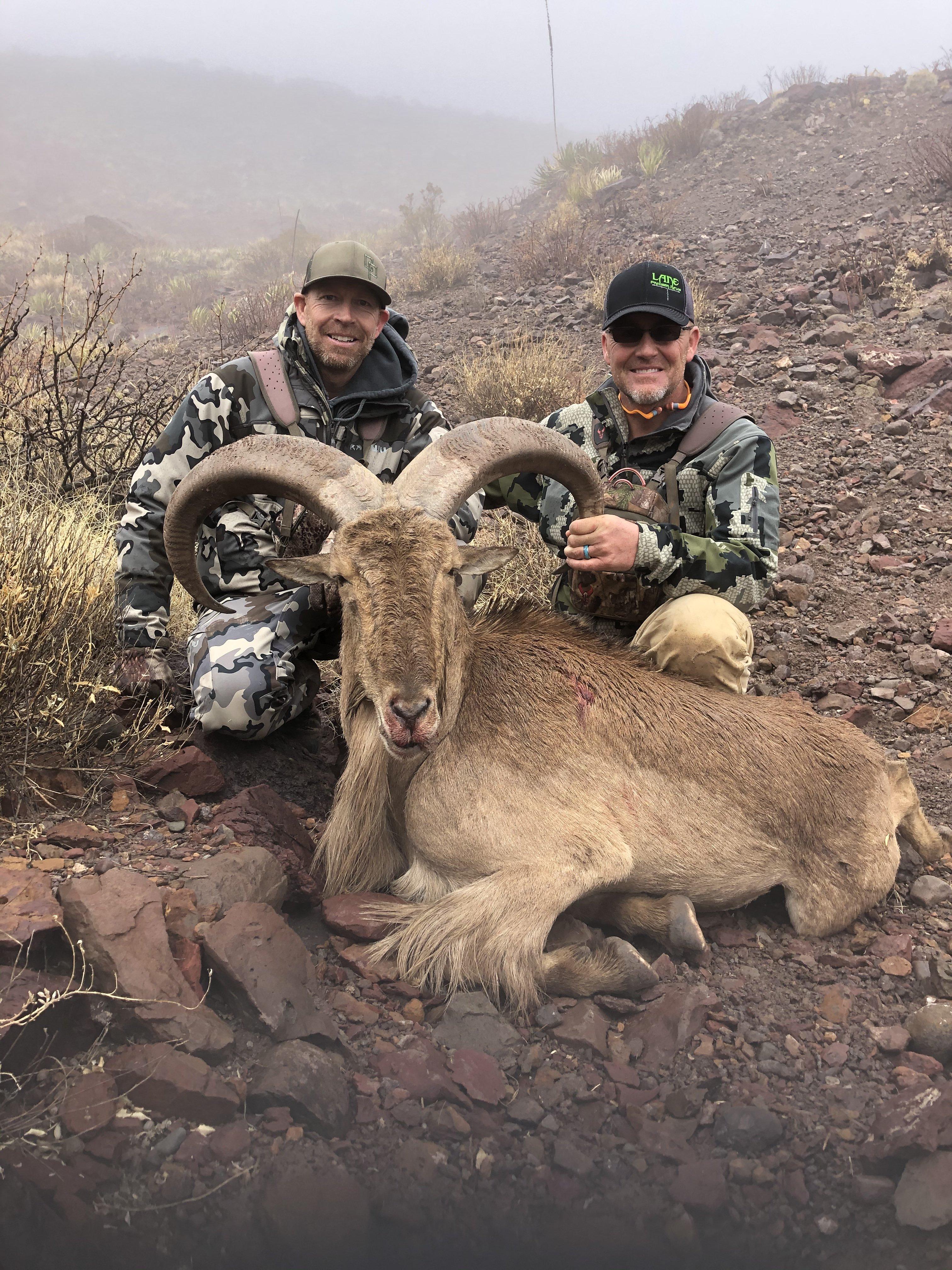 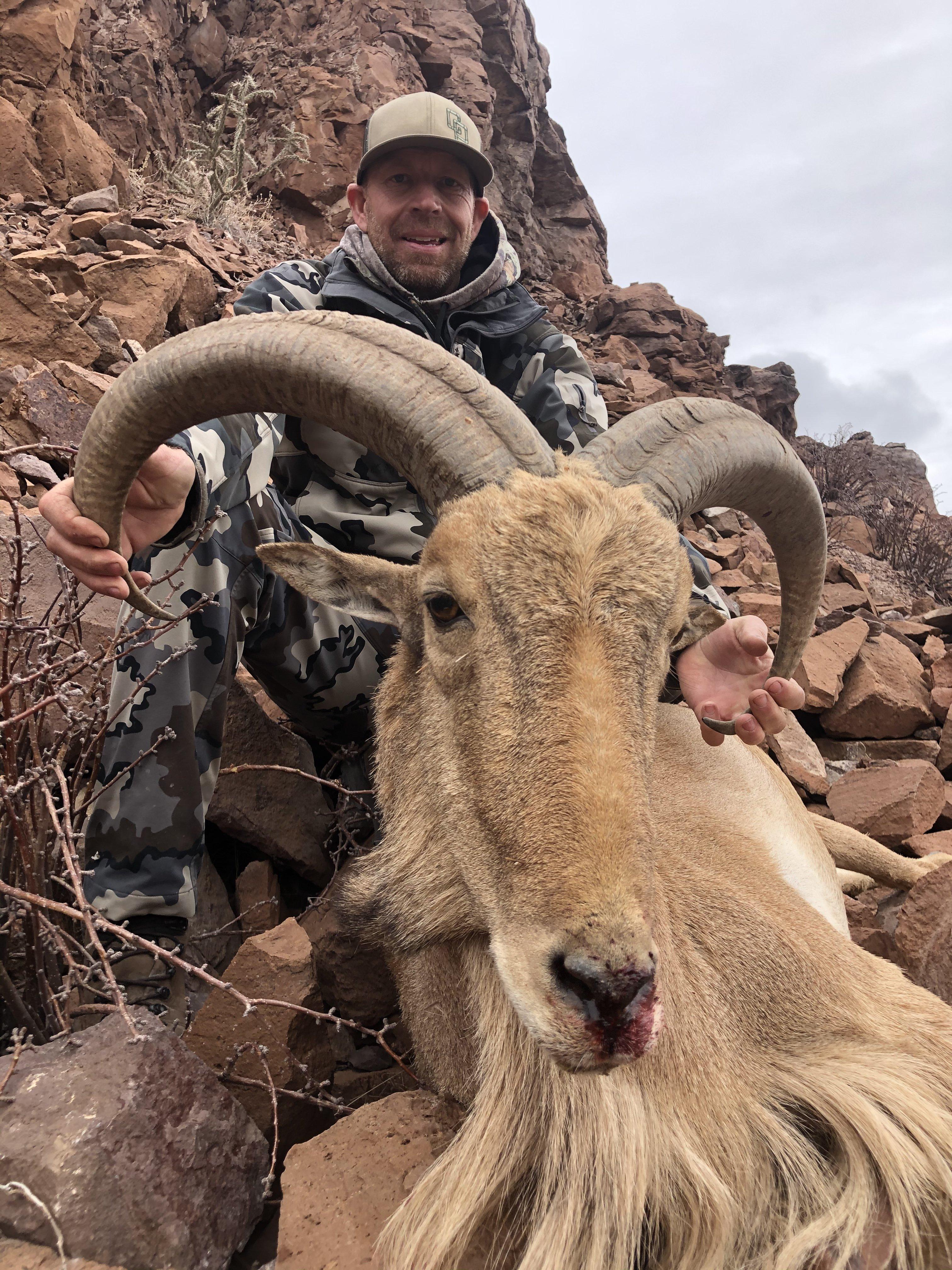 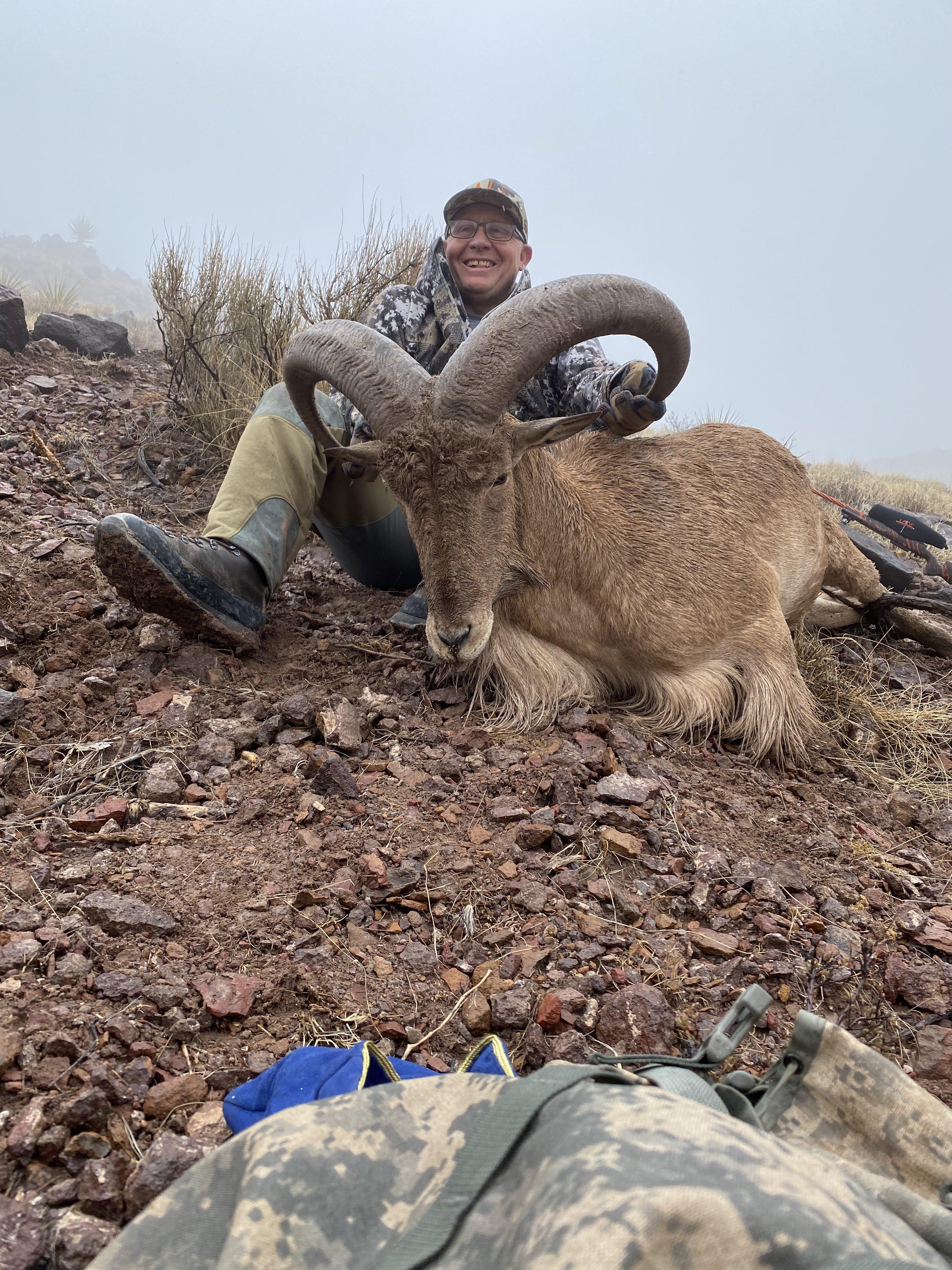 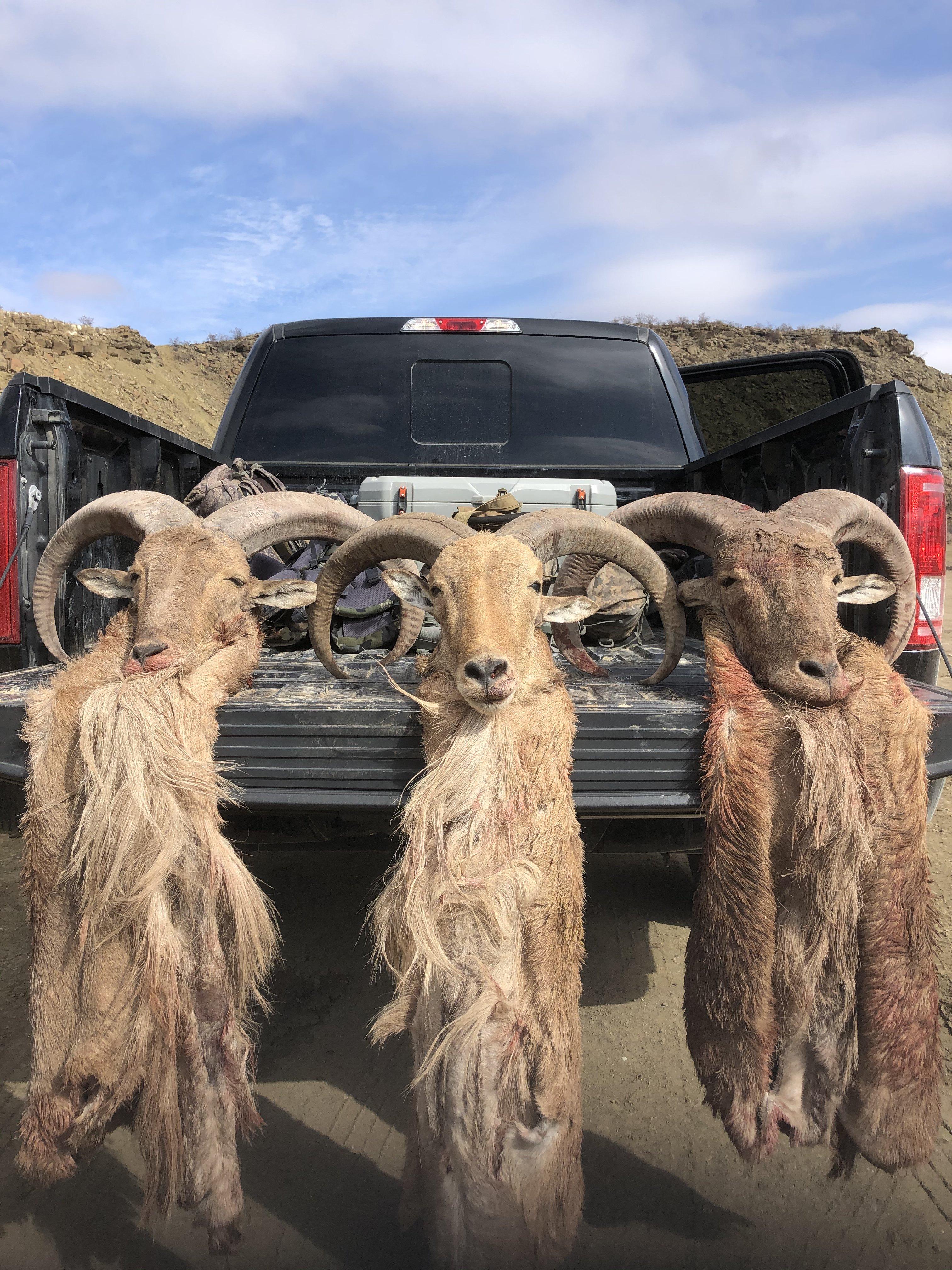 Good job on the perseverance and making positive things happen in the face of adversity. Nice rams, looking to do this myself in the near future. Thanks for the tips.

I was born in Alpine and grew up hunting all around the Davis mountains and the Black Gap Mountains area as a kid, brings back a lot of memories. Thanks for sharing.
K

Nice article. Thanks for sharing the story and the pictures.

Many people try different things to make them taste good.. I'm not a fan.. Chorizzo with lots of spice. If you shoot a young one, or a ewe It might be worth the effort... To be honest I think they taste like crap. You will get different opinions on the subject, I will just say if I am hungry they aren't the first thing I'm going hunting for.. Ha ha.

Haha, that is what I was afraid of, especially what they are grazing. I knew of a few people that hunted them and I asked them what was the meat like, I could never get a response. I guess the buzzards and coyotes like them.
P

Congrats, looked close to your 30 in goal was it?

As far as taste the flavor isn’t bad, similar to mule deer. They are Tuff though even the ewes. Best to grind into breakfast, summer sausage or any other kind of ground

Hunting one of those is on my bucket list!

dxlbaile said:
Many people try different things to make them taste good.. I'm not a fan.. Chorizzo with lots of spice. If you shoot a young one, or a ewe It might be worth the effort... To be honest I think they taste like crap. You will get different opinions on the subject, I will just say if I am hungry they aren't the first thing I'm going hunting for.. Ha ha.
Click to expand...

All my years I too could never come up with a good recipe. I did find a good way to tenderize it by using kiwi fruit as it has a powerful enzyme but would not go beyond 24 hours as the texture gets all wonky. Were you by any chance around Valentine or Sierra Blanca area?