Pick this up at pawn shop for a song,
any advice on what action to take getting it out?

First thoughts of the top of my head.
Disassemble bolt and use a punch through the firing pin hole.
Drill and tap brass and use a bolt to push or pull it out.
Careful work with an end mill.
Buy a new bolt and re-headspace.
S

Is the rest of the brass still stuck in the chamber?
S

With a bolt looking like that. Magna-Flux might be a good idea if you ever get the brass dug out of the bolt face. Finding someone to do it might be a chore as few want to take on the liability associated when it comes to firearms.
L

LaHunter said:
Is the rest of the brass still stuck in the chamber?
Click to expand...

No it's out and cleaned up good

it's basically a way to find cracks in iron and steel. You reallly want to do it. The pressure it takes to wedge a case head in a bolt head like that where you're asking how to get it out means the rifle was subjected to a massive overpressure. I'd be having MPI (magnaflux) inspections on the lugs, lug engagement surfaces and bolt face and probably replacing the barrel because either a fool or a child (or both) owned it previously. For how to get it out, that's going to be a challenge. I'd start by drilling it out and see if I could get the metal thin enough to be able to stick use a spanner tool and a couple carefully drilled holes to spin it or cause the brass to bend until I could get it to pop out. Once you can get it to spin, it should pop out under ejector pressure. I bet the ejector is fugged up too though so you'll probably end up at a gunsmith anyway if you don't want to break anything else.
L

BallisticsGuy thanks!
that was very helpful, I am a Remington guy and someone else ( not on this forum) bought this gun and wondered if I'd look at, sounded easy over the phone, then I'm like wait a minute! I might just pass it on to local gunsmith Dennis Olsen

Put a deeper gauge down between the rins and the shell at the,point of extractor lip...while pushing towards the ejector...

Don't pull on it or try to rip it out....will ruin the bolt face lip......
Just be gentle and insert the flat gauge and push the extractor back.....should come apart fairly easy......
Z

LkHntr said:
No it's out and cleaned up good

A method of using magnetic flux lines to line up iron filings across cracks in ferrous metals. Very commonly used to determine if an engine cylinder head is suitable for rebuilding. An automotive machine shop should be able to do this. 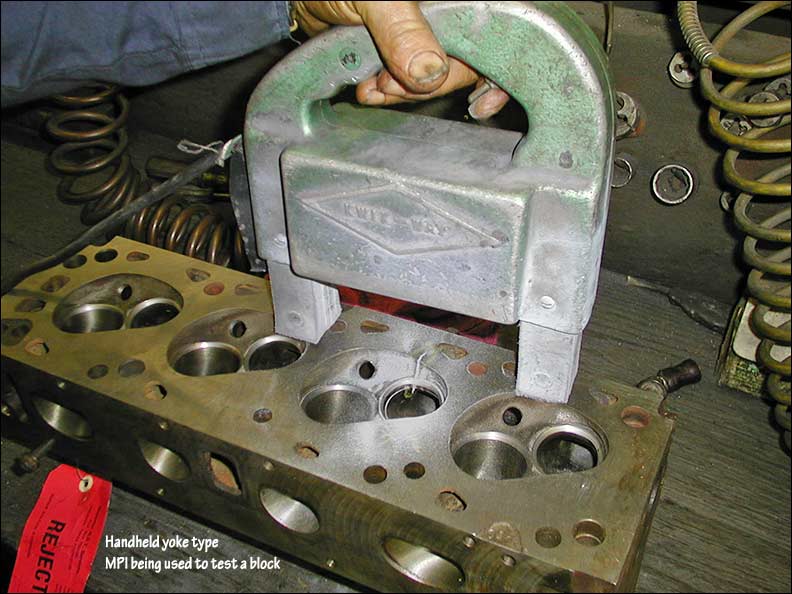 Good pic with a bad caption. That's a Ford 2.3L cylinder head, not an engine block. If you have any aircraft repair facilities or oil fields in your area there is probably a Non-Destructive Testing business somewhere that can do Magnaflux, X-Ray, Zyglo (non-ferrous metals), and others that I've probably never heard of. Testing as suggested sounds like a very good idea to me. Or keep the actual action itself and replace the barrel and the bolt. I'd still test the action if you do that.

I think that I'd let it soak a while in some bore cleaner before I tried anything further. Put it lugs down submerged in a small tray and cover the tray so the bore cleaner doesn't evaporate too fast.
O

I would have a real good look at the bolt handle as well. You would have to crank on it pretty hard to get the bolt open after that shot. I have seen a gunsmith chuck the bolt in the lathe and carefully remove the centre portion of the brass then squeeze the rest in and pull it out. It wasn't quite that bad though. (It was also mine, I hate to admit.)

How much of the atrocious look to the case is,from you digging at it..trying to get it out....i bet quite a bit...definitely an over pressured blast....slip a feeler guage down the edge to release the shell extractor....or drill it out.....like said above..drill and compress it....
N

Looking at the bolt near the bolt handle it looks like the metal has sheared? A gunsmith could give you an assessment of condition and solid advice whether you choose to do the work yourself or hire it out.
Share:
Reddit Pinterest Tumblr WhatsApp Email Share Link

Big disappointment, what to do now?