So, what calibers would you recommend that i can fit in a remington short action? i will mainly use this gun for F-class but also for hunting if im sitting tight in a spot as a really accurate mid range thin skinned game rifle.

To supliment my F-class gun i am building a AR15 in .300whisper with suppressor for short range, buying a Kimber M84 in .260 remington for a light carry gun, and either a .300wsm or 7RUM for long range.

F-class is composed of two fields: open/unlimited and FTR. FTR is restricted to military calibers of 308 and 223. Open is any caliber.

So if you want to shoot F-class I would suggest you stay with the 308.

Here is an F-class rifle at work both hunting and competing. 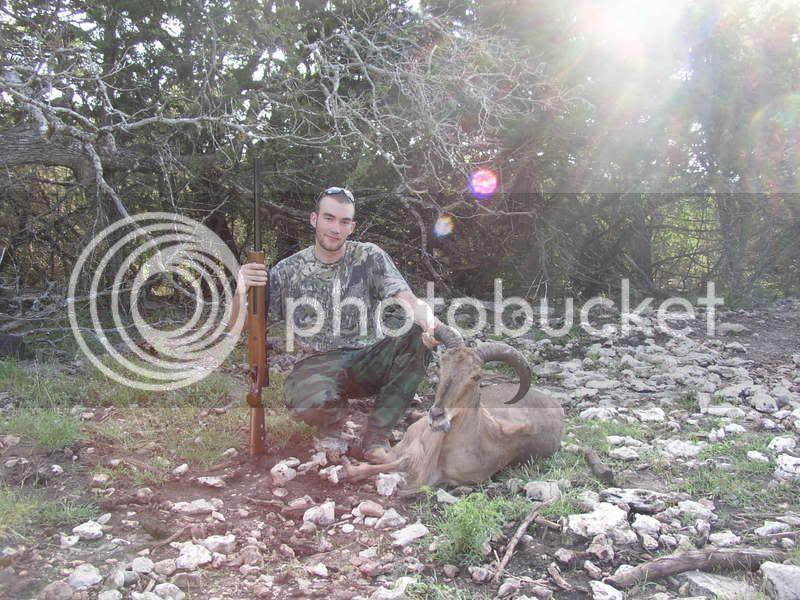 You do not say what action you have so it is hard to say what to do. If it is a Remington action, then take it up to Eddie Harren and tell him to put you in a new barrel and a match chamber.
O

I am aware of the difference between F-Class Open and T/R. I want to shoot Open because i feel a 7mm cartridge (or 6.5mm) is more veristile so i can also use it for medium range hunting, where i dont move much. The .308 drops and drifts a litte too much for my liking.

I currently only have one rifle, the .308 and i feel a heavy barreled .284win or other 6.5/7mm cartirdge will be more versitile.

thanks for the links, will check them out, have read some before already.


EDIT:
Just finished reading the links you posted, great story in Texas there, i went to South TX during thanksgiving this year and shot a few pigs too, longest shot was a mere 260yards but still a lot of fun. Will be going back in spring break.
Also, that's a real nice ram, will you be at Quantico for the feb. match? I wont be able to make the Jan one but i hope to get to the feb one, havent shot in one since november.

Three of the most widely used calibers are:

These all have light to moderate recoil while shooting high BC bullets at very respectable velocities.
There are LOTS of others from the 6mm BR to the big 30 cal magnums but these three take more than their share of wins.
Dave
O

I know the 6.5-284 is a real barrel burner, how about the 7mm WSM? if i clean it good and don't overheat it, what kind of barrel life can i expect?

I know the 6.5-284 is a real barrel burner, how about the 7mm WSM? if i clean it good and don't overheat it, what kind of barrel life can i expect?

PS: There will be Rec Fire on Range 4 Sat and probably Sun
C

I started shooting f class with a 25-06 hunting rifle. I did okay. I met a friend that was shooting the lights out with a 6 dasher. He let me borrow his reamer and after a few pieces, I had a new f class rifle (bat action, krieger barrel, mcmillan f class stock). I have done really well with this rifle (in my opinon). I am shooting the berger 108's @ 3000 and 105 vld's @ 3030. I have been nothing but impressed by this giant killer. I hear people talk about the extra work in a wildcat, but I think that it is really just one more step. I bought dies from sinclair. There is one fireforming step, but the fireforming loads shoot almost as good as the regular ones. There is very little recoil which helps develop shooting technique and wind reading skills. I have chambered another barrel in 284 shehane, but at the moment, the dasher is still the go to barrel for me. I know that I am giving up a little at 1000. At 600, it is very hard to beat a dasher or 6 br. I also killled a whitetail deer at 500 with this gun this year. The barrel life will be somewhere between 2000-2500.

will you be at Quantico for the feb. match? I wont be able to make the Jan one but i hope to get to the feb one, havent shot in one since november.
Click to expand...

They may have a make up match on Dec 20 and if the weather is halfway decent I will come to that. I do not care to stand around or lay around all day on wet cold ground when the weather is bad unless there is an animal to shoot at.
O

RJ338:
I will look at the 6.5x47 lapua, sounds interesting, I will look at brass cost and downrange energy of the round. Cost is also a factor for me, don't have an unlimited budget for this project. So maybe the 6 dasher would be worth a try buy 6mm is a little small for a thousand yards in my opinion, I know it rules at <600, I'm sure almost everyone here could outshoot me at 1000yarfs with a 6 dasher but it's a bit of a personal preferance, may be stupid one but I prefer bullets that make a bit of a bigger hole when I'm shooting game, 6.5mm is already pushing it.

Dirtball:
true, I suppose the barrel heating is (nearly) unavoidable in F-class shooting. I will look at the barrel lifes thread again, I read the main posts not the replies. I would definatly go with a 7RSAUM before the WSM because it gets the same velocity i want with less powder meaning longer barrel life, marginaly but still.
I may go to the rec fire if the weather is good Sunday, I will be shooting on my own property with .280fan probably saturday where we can shoot to 425yards from a covered position. Will see, if you see a 16 year old carrying wayy too much gear, that's me

Canderson:
I have read quite a bit about the 6 dasher and it seems to be a great round, but I also want to use this rifle to hunt at medium range with and the 6 dasher doesn't leave much room for error with a little 6mm pill. I my have to give in and get a dasher in the future but for this build I really want 6.5 or 7mm so I can shoot a little bigger bullets. If I had a big buck in my crosshairs I would prefer a 180grain pill at 3050fps (180berger, RL17, .284win) over a 108grain one at 3000. I'm sure it's capable of the shoot but I would feel more comfortable with a bigger bullet for now.
P.S. Your 6 Dasher sounds like a hell of a gun!!

Buffalobob:
I heard about the match, but I am leaving for Canada to go skiing on the 18th, so I won't be able to make that one either....
I feel the same way, I only go out to hunt animals in bad weather, I love shooting but it's not worth pnemomia unless it's got antlers, big ones at that.
L

Of course, a different bullet would be needed for hunting, likely a 120 ballistic tip, or 130/140 accubond would be my choices, but then again, I'm not planning to use this rig for hunting; I've got plenty of hunting rifles. What I don't have (yet) is a match gun.

I recently spoke with another shooter with 2800 rounds fired in his 260, still shooting lights out, but he commented it doesn't clean quite as easily as before.

loaders loft:
Yes I really like the .260 rem, I will probably build myself a light weight rifle in .260 but the .284win shoots faster with a heavier, higher bc bullet so for f-class that would be my top choice at this time.

RJ338:
I looked at some specs for the 6.5x47 lapua and it seems a little small for me. My software had s load shooting a 139gr scenar at 2700fps, I'm looking for a little more downrange umph for when I pull the trigger on 200lbs pigs.

If you want t to shoot out of a 308 length magazine I'd highly recommend the 6.5 x 47 Lapua. It's similar to a 260 Rem in performance but can use longer (lower drag) bullets in a 2.8" OAL package. It also uses the 308 bolt face so converting to it would just be a barrel swap. It gets a performance boost from a higher pressure rating than the 308 or 260 even though it has a little less case capacity. There's also the 6.5 Creedmoor which is sort of in between the 260 Rem and 6.5x47 but in my opinion the 6.5x47 has more to offer.

Help me pick an F-Class caliber!
2