Hello everyone. My barrel is finally wearing out on my Remington 700 BDL. Everything is pretty much customized on the gun one way or another, but the barrel was factory 8mm Rem. Mag. I would love to keep the 8mm rem round, but the lack of higher BC heavy bullets and the fact that the cartridge is slowly slipping into obscurity is bothersome to me. I am looking at a .338 caliber barrel now. Interested in longer range deer, antelope, elk, and hogs. 40% of the purpose of it will be for elk hunting I would say. What .338 cartridge would you recommend and why? I am a reloader. I am just interested in something that will be a lot easier to find a better selection of bullets for, and easy to get to shoot accurately (the 8mm mag is finicky until you find the sweet spot). Also interested in finding a 'smith to do the work. I appreciate any and all advice.

You have the action length needed to go with a .338 RUM and the fact that you have worn out an 8mm Remington Magnum barrel tells me that you are not recoil shy.

I would say go with a .338 RUM. You can always load your RUM down if you want or need to.
L 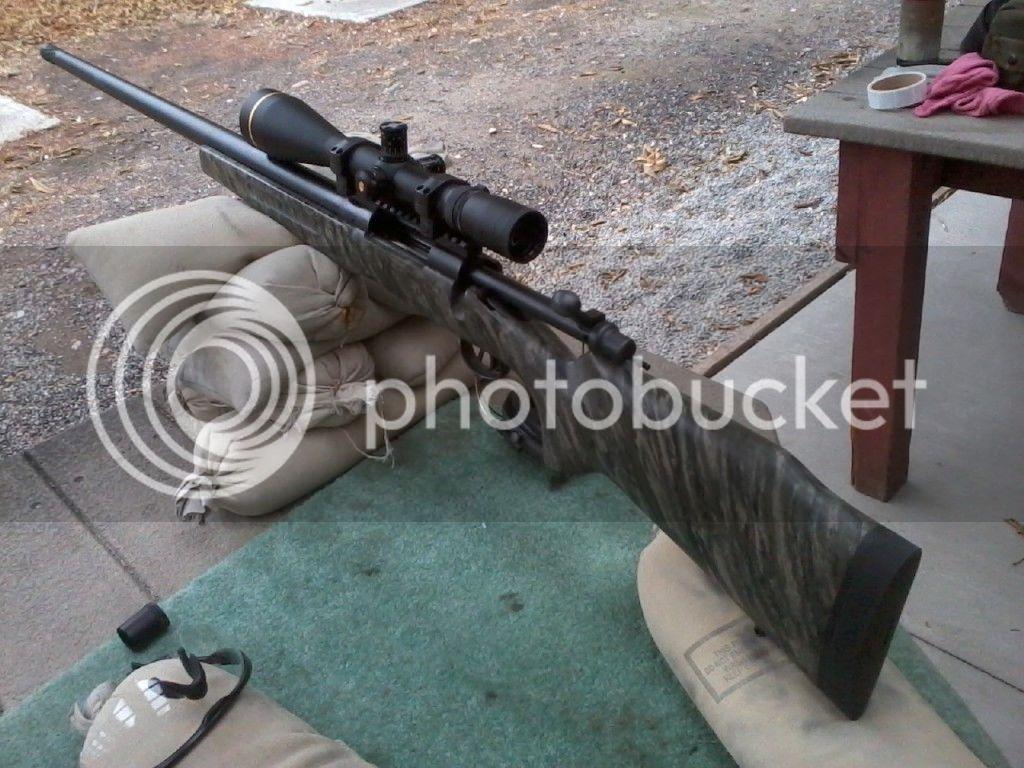 I don't think the picture does my new toy justice. I turned a long action model 700 338 Win Mag into a 338RUM. Shilen installed a 28" plus comp, #7 heavy varmint barrel and matte blued the entire thing, Timney trigger, McMillan did the stock and a Leupold 8.5-25x long range target scope topped it off. Weight is in the 14 pound range.

At some point a skim bed might snug it up but the fit to the stock is perfect, everything works with the exception of a slight issue with the rounds popping out of the mag well.

I took it out for break-in and it went just under MOA with my marginal handloads, 1/2 moa with factory ammo. I shot 40 rounds with no problems and recoil was mild and in the .308 range.

338 RUM is within 1gr case capacity of 338 Lapua and they have identical performance when fired from the same length barrel. Best of all it more than likely has the same bolt face measurements.

338 Lapua takes a magnum action and will need machine work. The 50fps you might gain with an Edge is not worth the extra effort to me.
Last edited: Oct 25, 2012
B

Location
Base of the Bluemountains aka Gods Country

338 Norma would be another option.
H

Thanks guys!! I have just over 1100 rounds down the tube of the 8 remmy mag, but over 800 of them were maximum loads (where 8 mags almost always shoot the most accurately). Initially I thought I may chase the idea of going with a 7mm stw because I have 300 pieces of 8mm rem mag brass, however I have shot plenty of elk with the smaller calibers, yet still prefer a larger diameter bullet for elk. I was leaning in the direction of the RUM, but there are a fair amount of edge supporters as well. I had read quite a bit on the subject, however I didn't think the edge would offer anything different than the RUM for the extra expense and time in owning a wildcat (wyatt's ext mag box), mild reloading hassles, etc.

From what I gather, both of them have similar barrel life and accuracy....correct??
D

My vote would have to go to the edge. like others said it is the same bolt face so there isn't machining to the bolt that the lapua would need. It out performs the Lapua and the RUM both (not by much but between 50-100fps depending on barrel.) 300RUM brass is cheaper to find than 338RUM brass at least around my way so since you hand load I can't find a reason not to take the edge over the RUM.


why do you feel the edge is more difficult to work with?? Just curious I only see the RUM having an advantage in factory loads VS hand.
S

Hi there from NZ. I have only had experience with the Edge in 338 and it has been the simplest rifle to get to shoot I have ever owned. Newly necked up brass shot very well. I have noticed references on the net to the edge being more complicated, on several sites in the past and it just ain't so. Perhaps sourcing dies could be a problem, I'm not sure. Here in NZ getting brass can be an issue at times, I stock up when I can.
Regards.
S

.338 Win Mag. Others will come and go and it will still be here chugging along. Anywhere you can buy ammo you can get a box of some weight slug for the 338. Its just a proven ( many times over) to be one great cartridge
Share:
Reddit Pinterest Tumblr WhatsApp Email Share Link

M
Opinions between which rifle to get and why