Opinion on primer seating? What is your depth?

No telling what 'below the case head' means to primer crush. It doesn't account for primer height into pocket depth.
J

Mikecr said:
For those interested in setting primer crush as a standard (and easily) K&M makes THE seater to do this.
Through testing I came to 2thou crush for Fed/Win/Rem, and 5thou for CCIs.
View attachment 196435
Click to expand...

JJMoody said:
Tagging in. My co-ax seats to .007 below case head as measured by my calipers in new ADG 7 mag brass. The manual describes-.004-.008 as the goal. I have no idea... just getting used to the new setup. Never measured this before now
Click to expand...

Nothing wrong with using the press for priming as long as you don't use the full power of the press. (Presses have to much maniacal advantage and can over power the primers) I personally don't recommend using a reloading press for priming, and discontinued using a press for this process many years ago when I found many primers that were well below flush. the press is great for de-capping/priming

I now use hand presses for priming where I have good feel and control of seating them. I don't have the K&M tool that Mikecr recommends, but soon will. it looks like the best tool for the job to date and it should be a good tool for checking previous loads with my existing tools.

Yeah, the K&M looks pretty slick. Wonder how it compares to the Lee hand prime? Probably a tad-bit mobetta. Hopefully you can read the text I’ve attached here. I’m very interested in folks’ thoughts on this 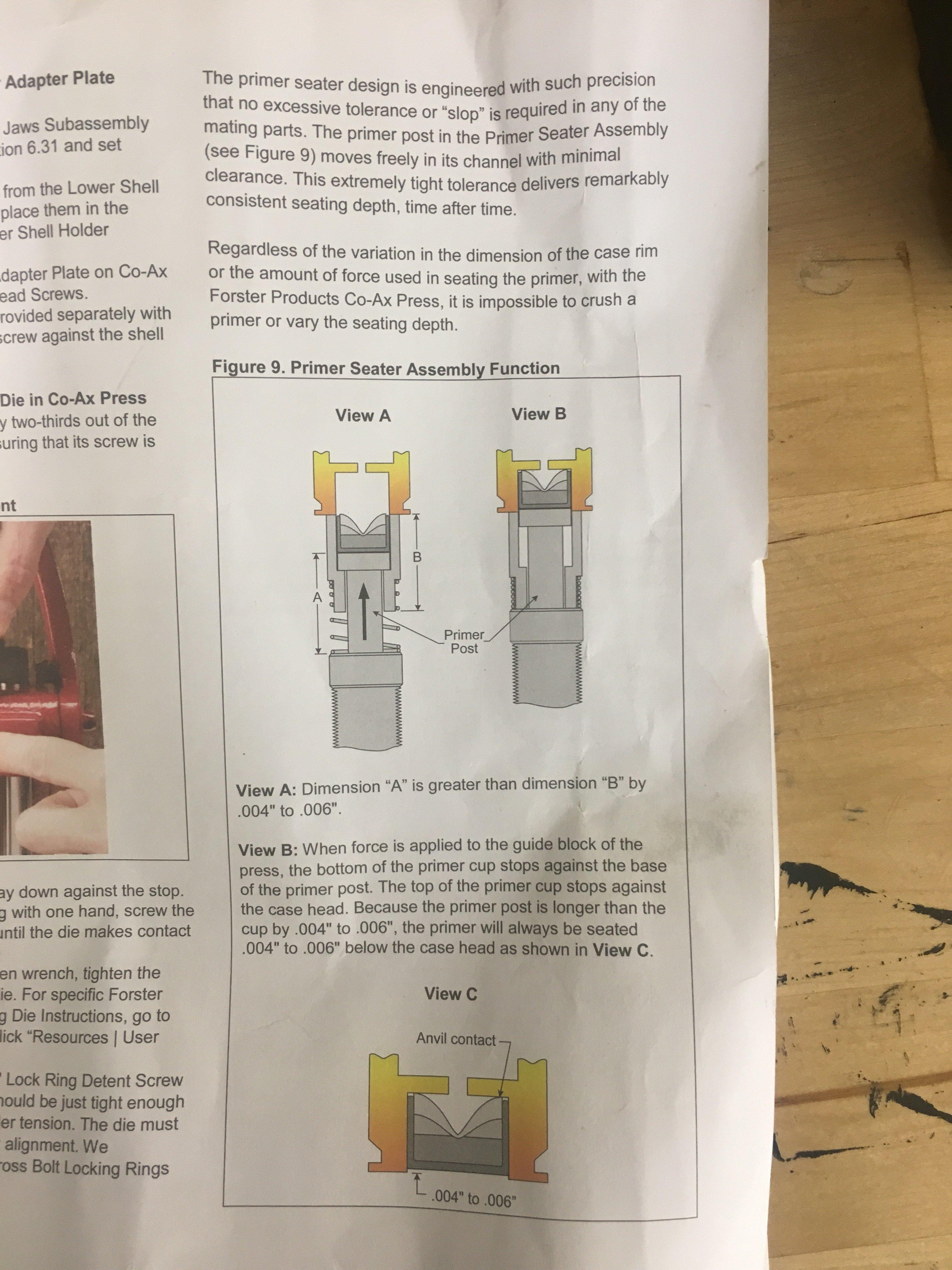 J E Custom said:
As I am priming, I check each primer for a flush fit. If it does not fit flush, I set it aside and de prime the ones I set aside and remedy those problems. .

Are you saying that you de prime a live primer? If so, could you please explain how that is done.

NorCal said:
Are you saying that you de prime a live primer? If so, could you please explain how that is done.

Yes. The press is very strong and if you slowly push the primer out it will be fine. What you want to avoid is impacting the primer by slamming the die down to fast. This is just because the primer requires that rapid compression/impact in order to fire. some primers are coated to prevent moisture from degrading it and soaking them may not kill the primer.

JJMoody said:
Yeah, the K&M looks pretty slick. Wonder how it compares to the Lee hand prime?
Click to expand...

Way better than a Lee or common hand primer tool.

The Co-Ax system shown sets the primer flush or 4-6thou beyond casehead. Whether this is consistent & best would depend on pockets AND primers being same & correct. Maybe their manual addresses that somewhere.

The K&M accounts for both individual pocket depth and individual primer height at the same time. It is zero'd for each case/primer just prior to seating. It doesn't address resultant primer depth below casehead, because that doesn't matter, provided it is at least below flush and reasonably same.
There are a lot of super primer seaters out there marketing on feel, or precision click settings. None of these do what the indicated K&M does, because none of them actually measure anything.

The function of setting crush is to pre-sensitize primers consistently.
Most probably think 'I smash em in there & they go off, so my method works'.
Well yeah, it works to set them off. Primers are ~99.9997% reliable in that regard.
But, there is no 'good' in striking primers with greater/lesser energy, or better/worse striking precondition, than optimum.
We find optimum, for anything, through testing and measurements.

You've probably done it or seen where folks swap primers to find whatever seems best. That's pretty abstract, right? And they're all going bang, so what does it matter? Well, it matters when you see one primer printing tighter groups than the others. It can matter enough that we should do it.
Now, if you reviewed the outcome of many people doing this you would see no trend. There is no primer better than others really. It just happens that this 6BR shooter found FEDs working best, while another landed on CCIs.
It's my contention that this is because the 6BR-FED striking system is closer to optimum for FEDs, and this must be further from optimum for CCIs. I believe he could adjust his striking to reach best with CCIs, if he really really wanted to. But it would not be easy, -especially while his primer seating is erratic at best, and contributing to this abstract.
By seating primers to a crush standard, as actually measured (every one), you're reducing one abstract in this for sure.

I was forced to undergo striking adjustments once, when a firing pin had slipped under it's set-screw. I could not tell where the pin was originally set. So with my developed load that always shot well (before pin slip), I adjusted pin setting, shot groups, repeat, until finding the right setting. This was no fun.
All primers went bang, but groups opened closed opened, and I definitely found optimum.
Ended up one of the single biggest gains I ever made with that gun. A full 1/8moa better, taking me from 3/8 to 1/4, which I would never have reached any other way. Ok, no fun, but worth it!
J

I use this tool from 21st Century and then adjust to get 0.005 below case head. It's very well made, has great feel when seating and I don't mind doing each primer by hand. 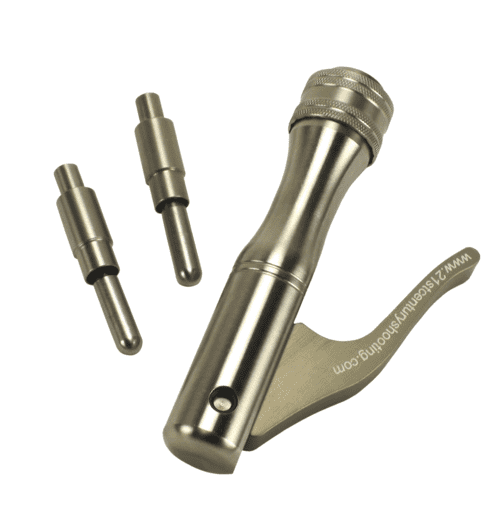 I just listened for a podcast that had Scott Satterlee regarding primer seating depth among other things, it was interesting, to say the least. he doesn't do much with primers, sometimes doesn't even clean it.

I use the primer pocket uniformers that came with my Lyman brass prepping machine and they work great. Never had any issues what so ever.
J

I was taught that Primer strike consistency was very important for bench rest accuracy by the bench rest crowd and still believe it. It may not be as important now with all the advancements. But when you go to all the trouble to get perfect spring tension on the firing pin, clearance on the spring to bolt bore for no drag. seating to the same depth just makes sense.

The one thing i do believe in is consistency. So how ever you do it, be consistent.

Just as rsmithsr stated...period. Primers are made to be seated this way. Those primer seating tools that offer adjustment are just a gimmick and one more thing to worry about.
N

Bob Wright said:
This one, is one of the more popular choices that can slip since it's 2 pieces held together by a socket head screw. It's cutter is carbide but the collar design has failed me on a whole bunch of brass. The screw allowed the collar to slip down the cutter shank...
It was a surprise when I started seeing seating depth increase dramatically.
Click to expand...

I think that Sinclair makes a one-piece design for this purpose.

nicholasjohn said:
I think that Sinclair makes a one-piece design for this purpose.
Click to expand...