The wife and I were out to fill some of her tags today and things worked good for us. Since I have one more day off work than her, I let her do the shooting today.

On our first day out we saw a total of zero deer and LOTS of hunters. My buddy said to wait until after the opening weekend and things would be different. We started by walking in a new area (we are hunting walk-in and BLM land) and about a mile in we saw two trucks and nothing but a fox. Since the fustration level was building we decided to drive to a small place(about 2x3 miles) that another buddy said was worth a look. About a mile from the turn off we spotted a lone antelope doe that appeared to be in a good place for a stalk. After walking about 800 yds we were able to get within 200-550 yds of her. She was at the bottom of a small gully and she decided to come to the top on our side of the hill. I was spotting for my wife and she was shooting my new LRK (Long Range Killer) and the shot was at 242 yds. The doe was feeding just on the back side of the top of the hill so we could only see her body, no legs. At the shot, the doe dropped stone dead. She dropped so fast that my wife asked where she went. She said nevermind when she heard the bullet hit. The doe was mature and sported 2" antlers. This is her 1st rifle kill and her 1st western kill. 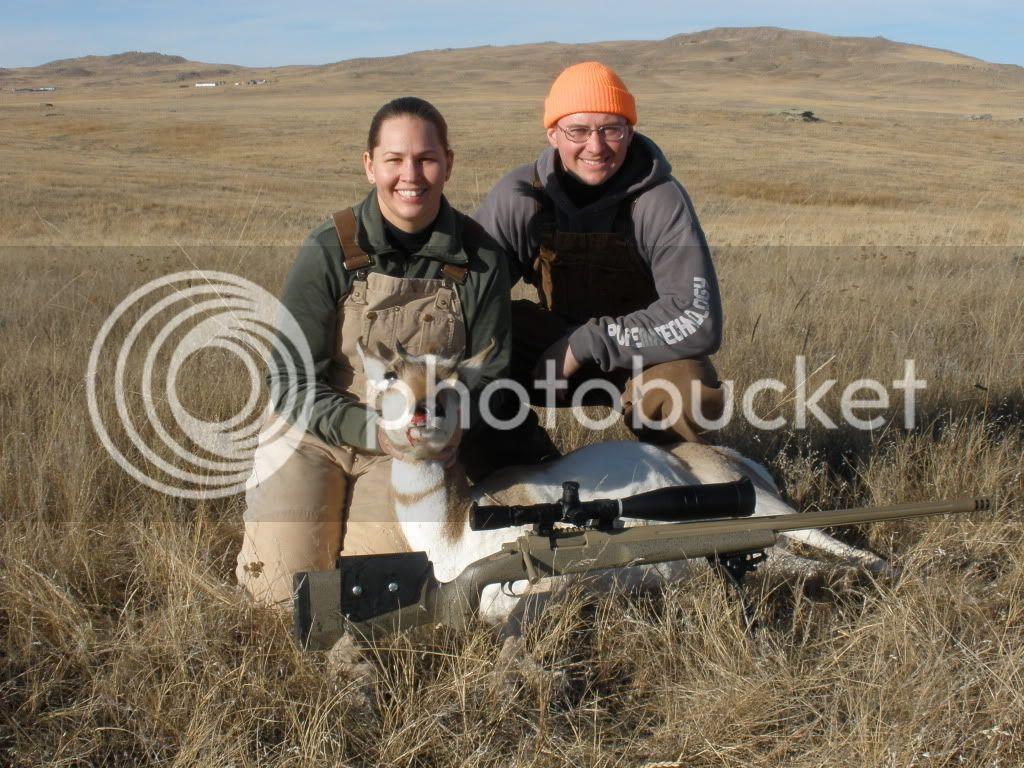 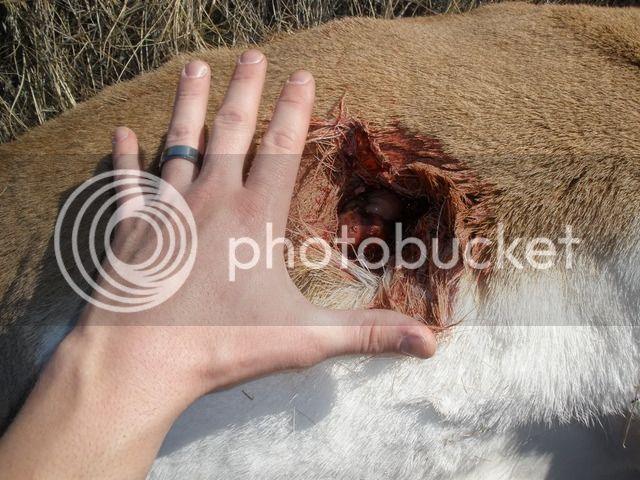 After the pack out (you can see who did the work) we headed to the spot my buddy suggested. We were looking for deer and we saw about 200 more antelope in 2 different groups in the same mile x mile field. After looking at them for awhile we looked at the hills past them and saw several deer working their way towards the same field. You can see part of the hills in the background of the Antelope pic. We noticed one deer leave the group and head our way. After waiting for about 30 min, and waiting for it to come back onto public land, we put a stalk on it. At this point we didn't know it was a buck and didn't care. We hurried around to put us within 400 yds of where we thought he would go. After we were set up, with only 20 minutes of shooting light left, we waited for him to walk down a gully at 356 yds. After almost 10 minutes I looked to my left and there he was about 200 yds away. For some unknown reason he crossed the fence into public land and walked up the hill towards us. After an extremely quick 90 deg turn, Jen zeroed the scope and shot. The buck dropped just like the antelope. 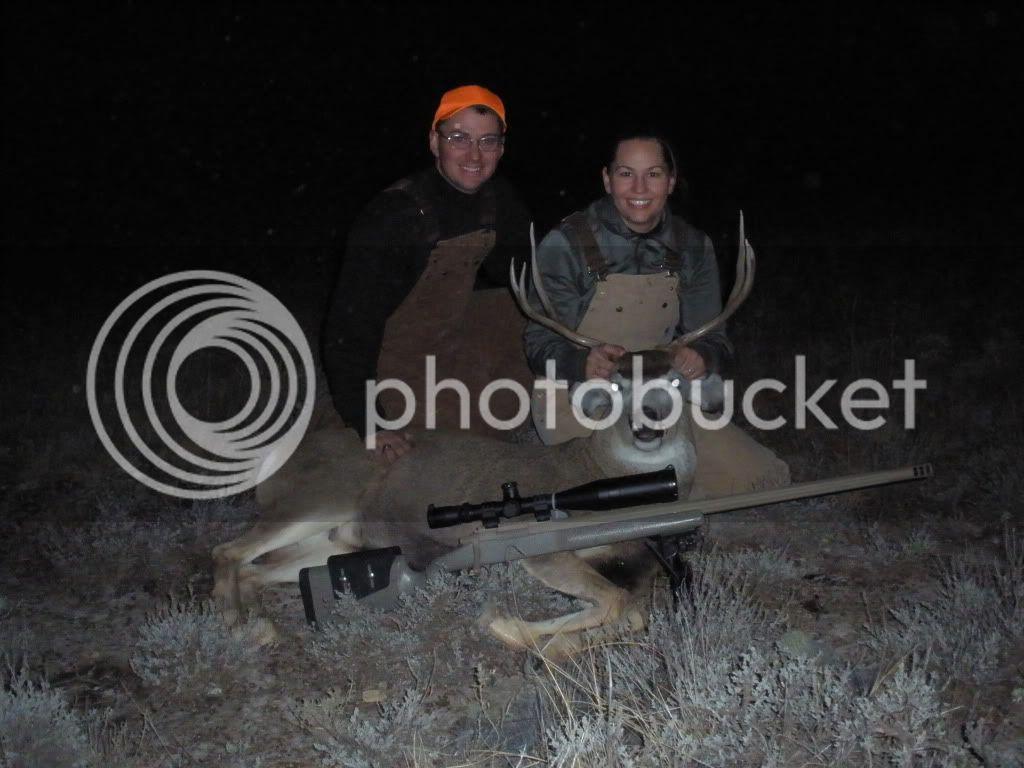 We did see a buck that looked decent that stayed with the group. Since he was almost a mile away I'm thinking he is a good buck. We will be in a better spot to hopefully take him tomorrow eve.

Sorry the write up is so long, I'm more pumped for her to do some killing than if I had burnt the powder myself.
M

Now that's a good day. Let us know how you do tomorrow.
M

What caliber and bullet are you using?
C

JARHEAD1371, Great that you and your wife enjoy the sport together. Job well done by both of you, congratulations to Jen-2 one shot kills, Outstanding.

Great pics and story! Kudos to your wife gun)Dont forget to tell us what kind of bullets your using on the next report...

Careful Ryan, next year you might be building a "Hers' rifle"
L

That's cool you have a wife willing to go hunting and support your habit. Good shooting.

Moman said:
What caliber and bullet are you using?
Click to expand...

We are already talking about it. She wants hers to have a carbon barrel so it doesn't weight 13 lbs like mine. The farthest she has shot is just over 500 yds. She was busting clay birds with almost every shot.
L

So I am trying to make the 7mm decision. How far would you be comfortable harvesting game with that caliber? I have read up on the caliber and people seem to think it is the cats meow for the short mags in the 7 category. What is your opinion? I am deciding between rebarreling my 300WSM or barreling for 7mmRem Mag, or 7 SAUM. How many rounds do you expect to get down the tube before failure? Have you thought about shooting the 180's or pretty happy with the 168's? Have you tried the 162 A-Max? Sorry for all the questions, but someone with a caliber I am interested in is a good person to turn to for solid information.

liltank said:
So I am trying to make the 7mm decision. How far would you be comfortable harvesting game with that caliber? I have read up on the caliber and people seem to think it is the cats meow for the short mags in the 7 category. What is your opinion? I am deciding between rebarreling my 300WSM or barreling for 7mmRem Mag, or 7 SAUM. How many rounds do you expect to get down the tube before failure? Have you thought about shooting the 180's or pretty happy with the 168's? Have you tried the 162 A-Max? Sorry for all the questions, but someone with a caliber I am interested in is a good person to turn to for solid information.

I would be more than comfortable shooting out to 1K with good conditions. I am not sure how long the barrel is going to last but I expect to get at least 1500 rounds through it. I feel one key to getting longer barrel life is not trying to push the bullet as fast as possible. I know that I can push it faster with the current powder that I am using right now, but I am more than willing to trade a little speed for the longevity of my barrel! I picked the 7 SAUM mainly due to its relative unpopularity. Most articles I have read about people using the short mags were the 7 WSM. And since I am not the type of person who follows the current trends, I went with the SAUM. I am shooting the 168's right now because that is the only 7mm Bergers I can find in the area. The only regret that I have with this rifle is not doing it sooner....or if you ask my wife not putting on the lighter carbon barrel.
K

Congrats: Man did that walk in stuff get hammered or what?? I assume you were in Butte co.
You must log in or register to reply here.
Share:
Reddit Pinterest Tumblr WhatsApp Email Link