David, with the 122gr bullets we were referring to, those two powders work quite well. Its a copper solid with a very short bearing surface. Rl23, H4831sc, RL26 and stabal all get that bullet to 3300+ in my old 23" barrel.

PatriotHenry said:
Thank you FEENIX. Budget is tight, however I don't think I will be happy with any of the "Factory" offerings. They are the wrong barrel length in the ones I like, and too dang heavy in the ones with 26" tubes. With the exception of Christensen Arms. I am not impressed with their quality.
Click to expand...

Sir a couple of the hunters up here there money was some what tight so they had me get a part a month over the winter a proof barrel one month a action the next month then a stock two of them even went with used H&S off of e-bay I found them for !/2 the new price after all the parts were in we put them all togeather and head spaced them they now all have switch barrel rigs and know how to do it themselves best way to go

highdrum said:
David, with the 122gr bullets we were referring to, those two powders work quite well. Its a copper solid with a very short bearing surface. Rl23, H4831sc, RL26 and stabal all get that bullet to 3300+ in my old 23" barrel.
Click to expand...

I missed the 122gr Solid. Thanks for pointing that out. I probably should have worded that a little differently anyway. RL26 gets closer as the bullets get lighter. RL33 and VV570 are still slightly better. Here is a 120gr Barnes which is the closest solid I could find on there. This is on the 26" we were using before so minus ~75fps puts it right where you were at. VV570 on that run would be the best choice if the rifle likes it. RL33 won't fit quite enough in the case as run/seated for full pressure. RL26 is not quite 100% fill. 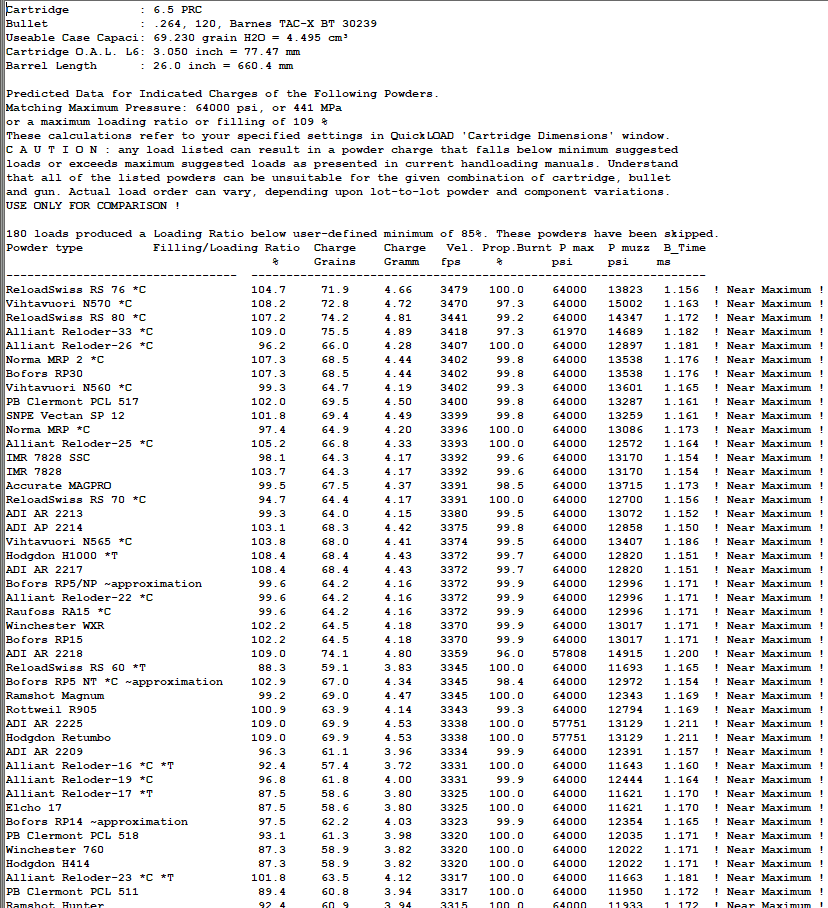 PatriotHenry said:
First off I am a Newbie on here. Not a Newbie with shooting and reloading.

I am building/buying a 6.5PRC, I have decided on a 26" tube, however my choices unless I go Totally custom are pretty limited in this barrel length. Does anyone out there have reliable data on velocity with Hornady 147 ELDM "Factory Loaded" ammo out of a 24" and 26" tube for me to ponder on? I have brand new ADG brass, and I am planning on trying the ABLR 142gr, Horn ELDX 143gr, and Berger 156EOL. This will be mainly a Hunting rig. From my research so far I am scratching my head on why some many makers are building their rifles with 24" tubes and this cartridge, as I have read many Shooters claims that they are getting very close to PRC velocity's with their Creeds. If that is the case a 24" in this caliber seems like a waste?

Hopefully this will help, as our equipment is somewhat similar. I am running a 26 inch, 1 in 8 twist barrel on a Curtis Helix action, ,caliber 6.5 PRC. I did my breakin with Hornady factory 147 grain ELDM and 143 grain ELDX ammunition. I used a Magnetospeed Sportster to measure velocities.

The ELDM (during break-in) ran consistently around 2950 fps, with one round that dropped 50 fps for unknown reasons. Accuracy was good, with rounds 16 thru 20 grouping around .674 at 100 yards and decent weather with a negligible wind from about 5:30. The 143 ELDX rounds averaged 2989 fps for 17 rounds. I didn't fire the last 3 because accuracy was severely degraded to the point that I began checking for loose screws, etc. Runout on the three unfired rounds was later measured as .012 max, with a minimum of .006 Extreme spread for the ELDX ammo was 61, SD was 24 for those 17 rounds.

I've moved on to ADG brass and am still fire-forming, but on a lark, picked a load out of a hat and fired 20 rounds loaded with 55 grains of H1000 and 140 grain Accubonds. Velocity averaged 2846 fps with an ES of 36 and an SD of 11. Obviously, the load needs work, and I haven't established much at this point.

In summary, the Hornady ELDM ammo is pretty fair stuff in this equipment. I realize that the numbers will change as the rifle settles in, but thought this might help.

As was mentioned the creed cant match the prc unless stupid loading is going on. And then is it consistant?

I really like that prc so far. No brake and a girl can shoot it....low recoil.

highdrum said:
Have you gotten decent accuracy with the 122? I have shot a lot through a different barrel and it was a shotgun pattern. Pulled the barrel and sent it back to manufacturer. My new barrel will be here very soon. I used rl26 around 63.3gr to get 3340fps in my old rifle and that was a 23" barrel. I'd be interested in knowing you coal and freebore for jump preference.
Click to expand...

With the 122gr Lehigh’s and 124gr Hammers I got accuracy well under 1/2 MOA when I was using Superformance. Found out how temp sensitive that was so I got the 122gr Cayuga along with StaBall 6.5 to do some pressure testing.

Running the light mono’s for hunting I got up to 3322 with 58.9gr StaBall 6.5 using the 122gr Cayuga solids with only slightly flattened primers.
Click to expand...

Where did you find the load data for 6.5 PRC with staball 6.5 ? I have 7 pds of it and haven't used yet. Found 6.5 Creed data. No PRC. Thought maybe was not slow enough. Your load could be close to a 124 Hammer.
Thanks

Couldn’t find any so I cross referenced multiple sources comparing StaBall 6.5 to other powders in cases of similar volume then simply started low and worked my way up. 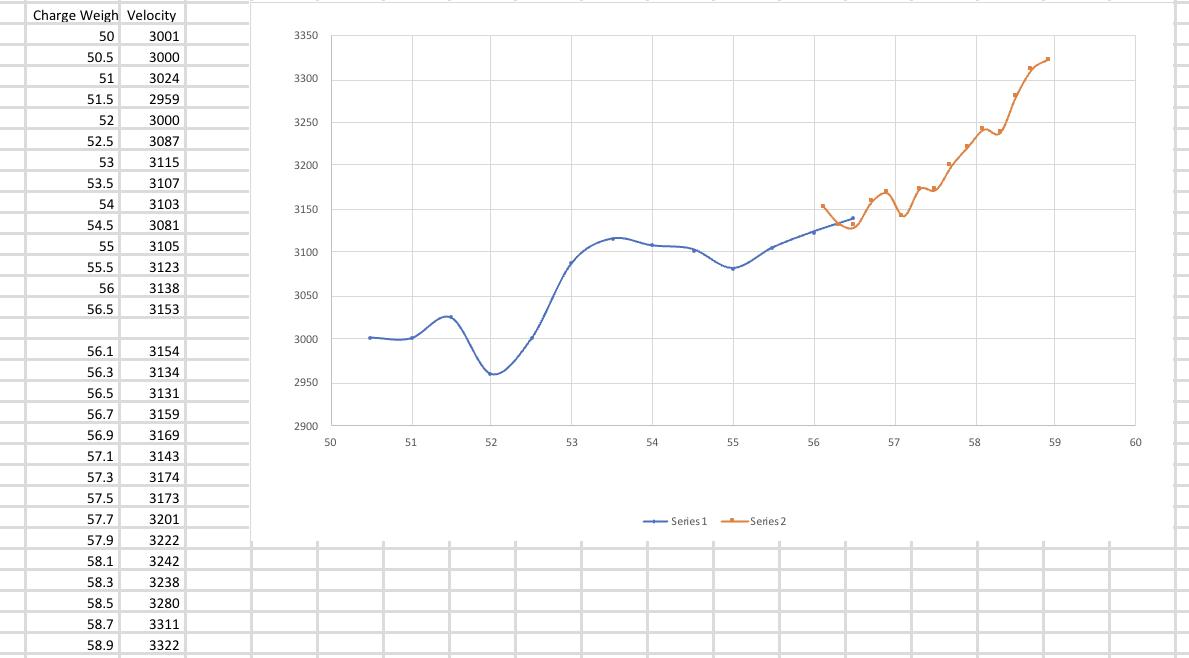 Based on my testing so far I’m going to do more in small increments around 58gr and 59gr to see what comes of it. However that will have to wait, I’m currently going to start testing the 153.5gr Berger’s for a long range class with a 3000 fps limit. I figure the heavy bullets with H1000 should get me close without going over.

FEENIX said:
I know the feeling. My first full custom was ~$4K. While I can afford it, I have trouble justifying the cost for a one-time payment at that time. Because I was not in a hurry I started setting aside money for it. I purchased all the components myself with a consultation with my gunsmith. When done incrementally, it is a lot easier to manage. Just my personal experience for you to ponder. Good luck!

This is why I’ve been looking at posts with ur 264wm barrelnut and been considering it’s time to do them myself...or buy a lathe lol
C

CMP70306 said:
Couldn’t find any so I cross referenced multiple sources comparing StaBall 6.5 to other powders in cases of similar volume then simply started low and worked my way up.

Based on my testing so far I’m going to do more in small increments around 58gr and 59gr to see what comes of it. However that will have to wait, I’m currently going to start testing the 153.5gr Berger’s for a long range class with a 3000 fps limit. I figure the heavy bullets with H1000 should get me close without going over.
Click to expand...