Sounds like a real "TROLL" of an idea to me. Go ahead and give it a try! If you survive, please post pictures of damage and injuries. I am sure some lawyer can find a way to sue somebody, and life just keeps rolling along!

Exactly how high over the number "1" is you IQ?

MMAM, This is something I would never do, but since you did the deed, I assume you shoot a magnum, 300Win, correct. If you really do want to load this powder, try (with 180gr) 72grs. of it, I don't see why that would hurt anything. A buddy of my dad's once loaded some 160gr. partitions for his 7Rem. mag. and used 70grs. of IMR4831, well If you look that up, it's not even close to the 62.4gr max in my Hornady manual for a 162gr. bullet, (Me thinks he was drunk), At any rate, my dad shot these, not knowing that they were over max by almost 8grs. The rifle didn't blow up, just a big flame came out of the barrel, and I noticed the case showed some stretch, about .015" I'd say, this was before I started reloading, so I didn't know either he was shooting some 'HOT' loads, when I started to reload and found out that it was a hot load, I pulled the rest of them and loaded them to 62grs of the same powder, so that being said, if you use 4350 data, you shouldn't have any disasterous results, but you never know. BTW, IMR4350 gives a higher velocity than 4831 anyway, so mixing the two aren't going to do anything better. Oh, the powder that Hornady uses for their Light/Heavy magnums starts out as a jel-like substance that is actually poured into the case, and then dries, If you pulled a bullet from these loads, you'd have to pick the 'powder' out and you'd never get the powder back in the case once your finished, you want more velocity, get a bigger cartridge.

Hello
There is a very good article in the VHA magazine this time about burn rates and quickness and things. Authored in part by Ken Howell.

Thanks guys, I will dump it out, more likely burn it. Thanks for clearing this up for me.
I

Magnum,
Nothing personal, just that sometimes these things can sneak up and bite a guy in the butt. I know where you are at, a can of powder is a can of powder, but we only get one set of eyes. Our face is in a touchy position if all hell breaks loose. Seems like most reloaders go through a stage where they want to improve performance with more powder. Easy to do and very easy to overdo.
If we want more performance the best answer is a bigger cartridge case, that is why there are so differnt choices available.
Your roses will love you for all that extra nitrogen

I realize this thread is quite old, but after reading it, I had to guess this was a joke. Mixing powders in a can, to create a super powder, why not a touch of bulls-eye to really kick things off.
This was a good hearted joke, not a real question.
L

brassprep said:
I realize this thread is quite old, but after reading it, I had to guess this was a joke. Mixing powders in a can, to create a super powder, why not a touch of bulls-eye to really kick things off.
This was a good hearted joke, not a real question.
Click to expand... 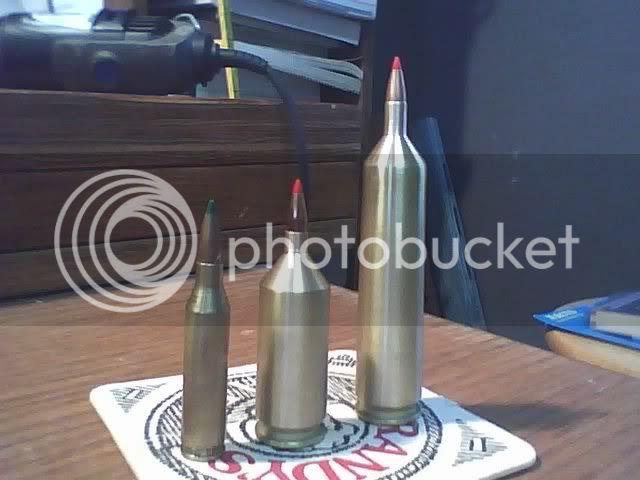 Location
On the top of some mountian in Montana

I think mixing is dangerous! I once mixed whiskey with ice and almost killed my self!! This one time I tried mixing it up with my girlfriend and her hot little sister... Well it seemed like a good ideal at the time... I wounder what she's up to these days?
B

brassprep said:
I realize this thread is quite old, but after reading it, I had to guess this was a joke. Mixing powders in a can, to create a super powder, why not a touch of bulls-eye to really kick things off.
This was a good hearted joke, not a real question.
Click to expand...

Don't bet on it being a joke. It is done more than you think.

An interesting side note is that in the 1k comps we normally list bullets powder etc and Phillip Yott in NC used to list his powder as RL 27 and post on different sites, that "you just added a lb of red dot to 5 lbs of RL25" to get RL 27. Phillip won a lot of matches by the way and had a sense of humor.

That raised a lot of eyebrows and many questions about RL 27 and where to get it.

Seems that Alliant kept getting phone calls for RL 27 and people getting mad when told it did not exist. They were accused of trying to keep it secret. Finally they figured out where the people were getting the word on RL 27 and tracked Phillip down and asked him to quit listing RL 27 as his powder. He agreed to and has stepped down and is only using old RL 25 in his guns now.

Make_mine_a_magnum said:
Ok, so it sounds a little sketchy. I don't really want to throw this pound of powder out, so is it still safe to load??

I think you created a pound of fertilizer.
The only way to get an actual 50/50 blend would be to cut the charge weight in half and weigh each powder separately. Then the question would be how do you get consistency in the case.
Not a good idea.