DWier said:
Glad I'm not the only one

light rifle, medium to heavy recoil, use front bag in preference to bipod as it reduces bounce (or recoil) one hell of a lot.

PNWdude67 said:
With regard to NPA here’s a tip that I recently learned from a very experienced instructor USMC scout sniper and Hunter. Field shooting is not like pure bench shooting. So zeroing and shooting groups should simulate best case scenario shooting positions. Prone being the most stable, is where he zeros. Natural point of aim by his definition is where the rifle come to rest at the respiratory pause post exhale. The rifle will move Naturally while breathing a we should not fight or restrict that movement. Basically, the sight picture appears to shift the Point of aim/impact down below the intended zero while inhaling and as we exhale the rifle settle back to the NPA and the reticle zero rises back up to the intended POI. He posted a video of this and my ability to consistently shoot groups has improved considerably. All my shooting has by Establishing a solid NPA and allowing the reticle to move with my breathing and trusting it to come back to the NPA when it’s time to break the shot. In my opinion it is much easier and more natural than trying to hold the rifle on the zero group throughout the breathing process, which creates tension that hinders accuracy.
Click to expand...

Excellent post, PNW.
Yes, it is impossible to hold they rifle completely steady while aiming, unless you can stop your heart from beating.
The best one can do is slow down the heart rate by relaxing, avoiding stimulants (as described above by several posters), and taking advantage of the cardiorespiratory reflex (the natural slowing of the rate of heartbeat that occurs on exhalation), so the trigger pull can occur at the same time for each shot.
To see what I mean by cardiorespiratory reflex, feel your radial artery pulse and note the change in time between heartbeats as you inhale and exhale. (Mine is very exaggerated, thus easy to notice.) This demonstrates why we exhale (66% or 75%, whatever is comfortable and allows you to not take a breath for several seconds) before starting to pull the trigger.
Watch the reticle move in an oval circle while holding on target-- that is the surge of blood from each heart beat expanding the chest and moving the stock. Then time your trigger pull for each shot to match the same phase of chest expansion each time. This is good to practice while dry firing.
Unfortunately, in a hunting situation, with a big bull or buck in your crosshairs, the heartrate is going to be accelerated! This is where hunting experience comes into play.

Took me a while to post on this one, I think about everything has been covered in the posts that pertains to real accurate shooting tips. I'm going to share a tip I got from a fellow shooter named Rodney who's gone on now but had a profound effect on my shooting......"aim small shoot small". Its been repeated in this thread as well, used to watch him shoot and didn't matter if it was a 30-378 or 7mm RUM on down he could shoot the tiny groups. I stumbled on to a target that seemed to take the aim small shoot small into focus for me.

Yes it was a certain target that really helped me to tighten up so to speak. I had the rifle hold and breathing basics down and I'll never tolerate recoil like some but this target helped me to always be on target center better than any. Its a palma target with very small center inside a diamond shape, the diamond helps me to have crosshair's at 12 and six and three and nine each time. I see four tiny pieces of pie and when things move even slightly I stop and restart the squeeze. I use only diamond shape target's now and in my case it has helped, I use the large open five diamond target for load work-up's and the smaller 12 diamond target when I'm dialed in for group's. I'm sure many will say they can shoot any shape or style target equally and my hats off to you, but for me old Rodney's saying lead me to these targets and they helped me in my shooting.

Now I hate the 12 diamond target for one reason and that's the heavy black outline tends to hide bullet holes but if I see bullet holes it adds pressure with each shot on a good group and makes me loose concentration if I see a flier. We all got our little tricks and this is mine. That white center diamond in the 12 diamond target is 3/8" when you shoot in the white you got a great group. IMHO it has made me a better shooter and thats what this forum and all the rifle and load work is about Great thread topic! 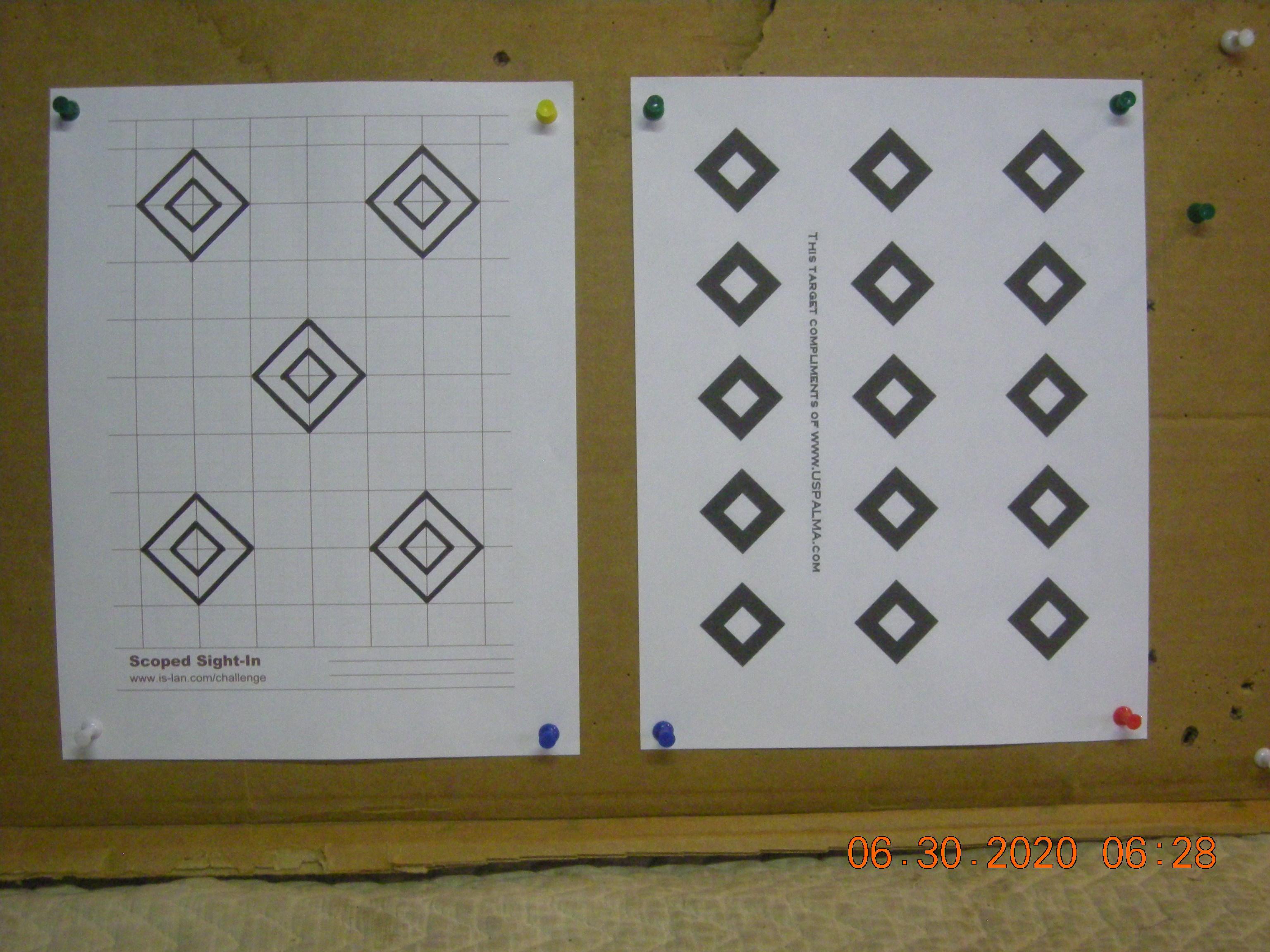 When you leave the truck on a hunt make sure your scope power is dialed all the way down - not up - like you left it at the range after your last sight-in. My Wonder Wife (awesome hunter) lost a gorgeous elk at 15 yards because of that little booboo.

Joefrazell said:
Interested to see what everyone's number one tip to shooting groups? Looking for very specific pointers or your number one thing to do when shooting. let's keep it shooting groups at 100-1200 yrds with a capable hunting rifle. Go!!
Click to expand...

Thank you for posting a great thread !
PART of the routine I go through each shot is as follows:
It is critically important that I place the trigger shoe just on the distal (outside) portion of the joint crease of my index finger. The finger should be at a 90* angle and should come straight back. At the natural respiratory pause when I break the shot, concentrate on the index finger NOT losing contact with the trigger and continue the pressure on the trigger until you SEE the bullet impact the target. At that point, release the trigger. Most of us on this forum are shooting brakes or cans. Goal: learn to see your POI. If you cannot, dial the power ring back 1/3 or half power until you can stay in your scope. As you get more proficient, you can turn up the power and practice seeing POI on closer and closer targets. Doing this will force you into better overall shooting skills.

Joefrazell said:
Interested to see what everyone's number one tip to shooting groups? Looking for very specific pointers or your number one thing to do when shooting. let's keep it shooting groups at 100-1200 yrds with a capable hunting rifle. Go!!
Click to expand...

Dr. Richard Gray said:
I hear you loud and clear. I'll be 71 come next month and lay things down and forget where I left it 30 seconds later. Drives me crazy!
Click to expand...

For me its Practice, and Practice and Practice. !!! Leave your wrist watch , cell phone in the truck . No distractions. Settle in, get comfortable , focus , and shoot .

Don’t leave your ammo at home either.....kinda puts a damper in things too!!

Good thing my range is near and or at my house/farm, depending on how far I want to shoot
Last edited: Tuesday at 9:50 AM
R

peterb said:
light rifle, medium to heavy recoil, use front bag in preference to bipod as it reduces bounce (or recoil) one hell of a lot.
Click to expand...

I agree. I use bags on front or a front rest with the wheels when shooting off the bench. If shooting from prone I use bi-pod and dig the ends into the ground with a little rearward pressure - my most accurate consistent groups. Idea is having the rifle recoil straight back into your shoulder using either position. That is just me.
M

BigDon said:
When you leave the truck on a hunt make sure your scope power is dialed all the way down - not up - like you left it at the range after your last sight-in. My Wonder Wife (awesome hunter) lost a gorgeous elk at 15 yards because of that little booboo.
Click to expand...

My wife and I, when in the field, often verify that the scopes are on the “lowest” power setting. Check the safety position quite often! memtb

epags said:
However, I have found a bolt on the cleaning bench after I have locked the rife in gun safe. LOL
(More than once)
Click to expand...

yes sir, the " human element " is always part of the equation. We are all capable of complicating a cheese sammitch & forgettin things & screwin up the simplest of things. I've learned ( the hard way/ the only way I know) to just shake it off & revert back to the old adage " welcome to the human race" & live & learn as best as I'm capable. Purdy simple philosophy.
You must log in or register to reply here.
Share:
Reddit Pinterest Tumblr WhatsApp Email Link