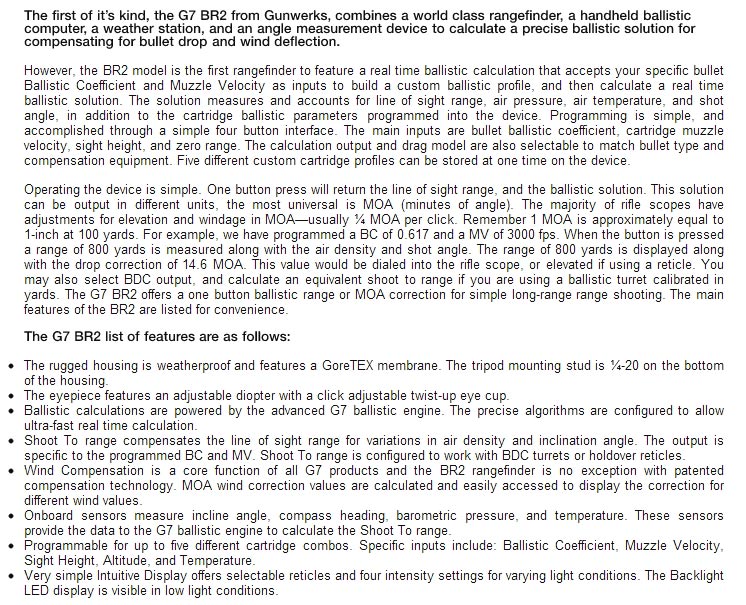 "I was very impressed with the Gunwerks G7 BR2 laser rangefinder; it is the ticket for at least 95% of the people who consider themselves long range hunters. For certain situations it is “the ticket”, anywhere where speed is an issue or quickly changing situations are happening. The Gunwerks guys have developed a system here that is going to change the direction long range hunting equipment goes in the future."

"I have been long range hunting for almost 40 years. I was making shots with old tech and know how that we would never even talk about for years because of ethic ignorance from the public. I was in the military for 10 years and practiced the trade their also. I can own any range finder I want and the G7- BR2 IS THE REAL DEAL. Nothing will help you dump an animal at distance more than practicing shooting in all kinds of windy conditions but this platform will take you to te next level fast. My owning one says what needs not be said."

"I have the G7 which I have used along side of my Geovids which in most cases gives me a back up reading since I'm almost always using my binoculars in concert for my 1000 yard max shooting distance when hunting. Readings are almost always the same with the exception of the tougher ranging situations that you describe. In those cases I look for a distance match between the two readings to confirm that my range is accurate. So far the ballistics calculator in the G7 gives identical readings to my program, including corrections for angled shots which is a great feature of the G7.

The nice thing about the G7 is that the programable near and far ranging enables the unit to ignore close range interferences like brush or small branches that I sometimes encounter while deer hunting that my Geovids can't handle.

The following is a followup comment after a recent hunt:

I just came back from a week of Mule Deer and White Tail hunting in Alberta which was my second hunting trip which I was able to use my G7 BR 2. On this trip I did have numerous opportunities to test the units effectiveness ranging game at extended distances. The unit had no trouble ranging deer the size of whitetail does at 1300-1400 yards with repeated identicle readings. I had difficulty getting readings with my Leica Geovids and my buddy's Swarovski RF binoculars at these distances.The near/far ranging proved effective at selectively eliminating interfering brush, hills, and other animals in the foreground or background. By far, the best feature. Also, had no problem ranging cattle out to 2000 yards. One was ranged at 2015 yards. Now having taken five deer and antelope using the G7, I have developed a high level of confidence in the unit."

"I shoot one of those 1000-1600 yard rifles, and for my use it has been just the ticket. The ballistic corrections are way faster than my old methods. I also live and shoot in the mountains of western Colorado, and there is not much that is flat. I'll see how it works this winter shooting prairie dogs in the flat lands of eastern Utah.

I had compared this unit to the Vectronix Terrapin, but felt the G7 would be much faster for my use. That it certainly has been."

"I used the G7 for over 80 days of whitetail hunting here in Georgia and it did everything I needed. The ballistic program "only" works out to 1400 yds, but in reality, how many people shoot at game that far? I might need to rephrase that and ask "how many people can make a killing shot that far?" As far as beam divergence,if the "far" and "near" functions on the G7 are understood,I think the problem will be eliminated.

I ranged a whitetail buck across flat ground 864yds at 1pm in bright sunlight.One afternoon about sundown I ranged an oak tree ten times.Results were 2537 nine times and 2536 one time. I am not assossiated with Gunwerks or the Davidsons in any way, but the G7BR2 rangefinder is a good product. Gary Campbell"

here
MOA, MILRAD, Shoot to Range, it does them all. If you want to put a round on target, first shot, at long range, this unit is for you. (As long as you can dope wind)

I use mine mostly for hunting. I hunt a lot in the Mid West and in Southwest TX. Very long shots are usually required because of the wide open spaces. I won’t take a shot on a game animal if I am not confident that I can put a round in the wheel house first shot.

Of course it is also fun to set up unknown distance steel targets and go for first shot hits. Or hey, “see that rock out there? Watch this.”

We usually hunt in pairs. One guy on the glasses and the other on the range finder. If we have a third, he may be carrying a spotting scope.

I procrastinated for many years because of the price. But, finally sold my Swarovski (high price too) that did range only and bought this one.

It is a must for the serious shooter.
Woolly 05/16/2016, 19:31
It works great!. I took it to FTW Ranch for a precision shooting course in preparation for a Mountain Goat and Moose hunt with a 375 Ruger. I entered my ballistics into the device. I had to adjust the muzzle velocity to get it to correlate with my shooting. I was able to make a first shot at 900 yards. There is no trouble with lasering the plates. However I did need to change the setting to "far" to accomplish this. Since I have a mil rad scope, I appreciate the ability to have the G7BR2 in those units. The wind hold over worked well. It is especially good for those in between yardage shots. Winds were between 8 and 12 mph. The only drawback is that in ballistics mode the yardage is already calculated for the inclination. So you don't get to see the line of sight yardage. I believe you see both in the range only mode. This is just preference to know the device is actually calculating it. I highly recommend this range finder.
Jeffrey Martinez 08/30/2015, 17:08
Have had this for about a month now and could not be happier. Great investment in my opinion. Does everything as advertised. I ranged a small building at 2430 yards, and everything in between!
ohaley 08/12/2015, 21:07
Great product. Have had it out to the range and in a competition. Ranges out to 1350 yards and MOA holds have been right on the money. Set-up allows for 5 projectile profiles and you need the MV when doing setup. I was able to range by hand out to about 800-900 yards, then had to use a tripod to stabilize the unit at longer distances. Was able to get ranges on cattle at 1800 yards, small buildings at 2250 yards. You can only get shooting solutions out to about 1350 yards (again the MOA suggestions were very accurate). Tested at ranges from 300-1350, incline/decline, different temps, density altitudes, etc. and it performed great. Note the comments on only supporting MOA.
Jeff Finn 03/04/2015, 10:46
Very quick and simple, great device
RW Steward 02/23/2015, 12:42
Looks like a very impressive product in principle but has one serious flaw that nixes it for me. It cannot deal with mils, only MOA. Since all my long range scopes are in mils that would require some calculation every time and the chance to screw it up in the conversion. Just an added complication I don't need.
I talked to the folks that produce it but did not get much traction there, even though it should be a relatively straight forward software fix that could solve this and would enable a selection of units as one needs.

Thanks, Len, for taking the time to chat with me from Afghanistan about which McMillan stock is right.

Dealing with Len he is a true gentlemen his word is gold.Should you have a problem He will help you to make it right.you guys trying to get a 1...

On the basis of your expertise I buy your products. Andy has been a great resource to me and customer service has been impeccable. I read many of...

I totally agree with ottw about the great service they provide. I was hunting late in the evening, and when I was un-cocking my TAC-15 to get off...

I found the guys at LRH to be very helpful and went the extra distance to help me out with my purchase. Very much appreciated!

Great product for the money. Everything Len and his son touches seem to work as predicted.

Once again great customer service. I ordered my last scope on friday and recieved in on monday. Thanks.

Many thanks again to you folks for the prompt service. My past experiences with your store have been excellent and this just adds to it.

Andy helped me all the way through this purchase. A remarkable customer service experience. THANKS A LOT ANDY! I WILL BE BACK FOR MORE.

Long range hunting has fast shipping and is quick to resolve any issues. A+

Thanks for the great experience on my purchase. The labradar was shipped fast,secure and works like a dream. I would recommend Len to anyone...

Cannot say enough about the help I received from Andy...Just getting back into hunting and Long distance and needed some affirmation that I was...

This is the toughest, most accurate scope I have ever shot. LRH customer service is second to none as well. I highly recommend trusting them with...

The service is great and I will be back to purchase more from this Company.