I just returned from a successful oryx hunt on the McGregor missile range on Ft. Bliss. I almost didn’t apply for the tag as I knew I was guaranteed a Wyoming elk tag, but put in at the last minute, and low and behold, I drew one. I really didn’t have time for two hunts this year, so I had to make a quick trip of this one.

I drove out to El Paso on Friday afternoon. At 5:30 Saturday morning, Derek Harris from South Peak Guide Service picked me up and we headed off to the range. Within an hour of first shooting light, Derek had me on a few oryx. We glassed them up, but they were all juveniles and broken horns. This would be the story of the entire day. For 12 hours, we hunted hard, and only found juveniles and broken horns. We did see a few nice mule deer, a ton of Aoudad sheep, and quite a few oryx, just none worth shooting. I was really hoping to tag out Saturday so I would have a leisurely drive back home Sunday in time for work Monday morning, but it wasn’t meant to be.

Sunday morning, once again at 5:30, we are headed to the range. We immediately found a group of seven oryx that included a couple shooters. We worked hard to get close to them, but they were spooky. Apparently they had been shot at that weekend already and wanted no part of us. Finally, around 10:00 that morning, we found a 36” bull 400 yards away across a shallow canyon. I laid down prone, ranged him, took aim, and promptly missed him. I made the wrong wind call and my bullet was pushed just in front of his brisket. I had what I thought was a 20 mph wind quartering to me at 45°, but apparently I was wrong somewhere.

I was feeling pretty defeated at this point, 400 yards is usually a slam dunk for me. We pushed on though, in search of other animals. We kept bumping the original group of seven from earlier in the day. We wasted half the day making three or four stalks on them, but they just would not let us close the distance. We had to get away from them, to keep them from wasting more of our time, so we headed to an entirely different part of the range. At this point, I was concerned that I wouldn’t get close enough to another oryx to get a shot. Finally, with two hours of shooting light left on the last day of the season, we found another group of seven with three shooters in it. We stopped at 400 yards and set up to make the shot, but a juvenile kept walking in front of the one I wanted to shoot. Eventually the group wandered far enough from me that I wasn’t comfortable taking the shot.

We managed to get closer, only to find that the biggest oryx was walking down the road up against the fence of a bombing range that was off limits. I was hoping and praying she didn’t cross over that fence. We made a run at her to try and turn her away from the bombing range and back toward the other oryx. It worked!!! She turned the right way and rejoined the group. Of course, this spooked the group and they ran off a little ways. They stopped at about 300 to 350 yards, I didn’t have time to range them. I dropped down and got behind the the rifle, took aim and shot. Hit!!! She ran about thirty yards and stopped and stood there, so I fired another round. This time she went down but just would not give up. I put one more round right thru her heart to finish the job. My weapon of choice on this hunt was a 375 RUM built by Rbros, shooting a 281 grain hammer at 2930 FPS. I heard going into this hunt that these were tough animals, and that proved to be true.

We approached the animal and knew immediately I had shot a world class animal. After gutting, skinning, and butchering her, we pulled a tape and measured her horns at 41”. The New Mexico State record oryx had 43” horns, so I was just shy of that. I’m letting the horns dry out now to get an official measurement, but I expect her to be in the top ten for sure. We finished getting her cleaned up around 7:30 that evening and I loaded her up in the truck and I hit the road for an all night drive to be back at work Monday morning. It was a whirlwind weekend, but it was a lot of fun. Derek was a first class guide and if you’re needing a guide for a New Mexico hunt, I would highly recommend you giving him a call. 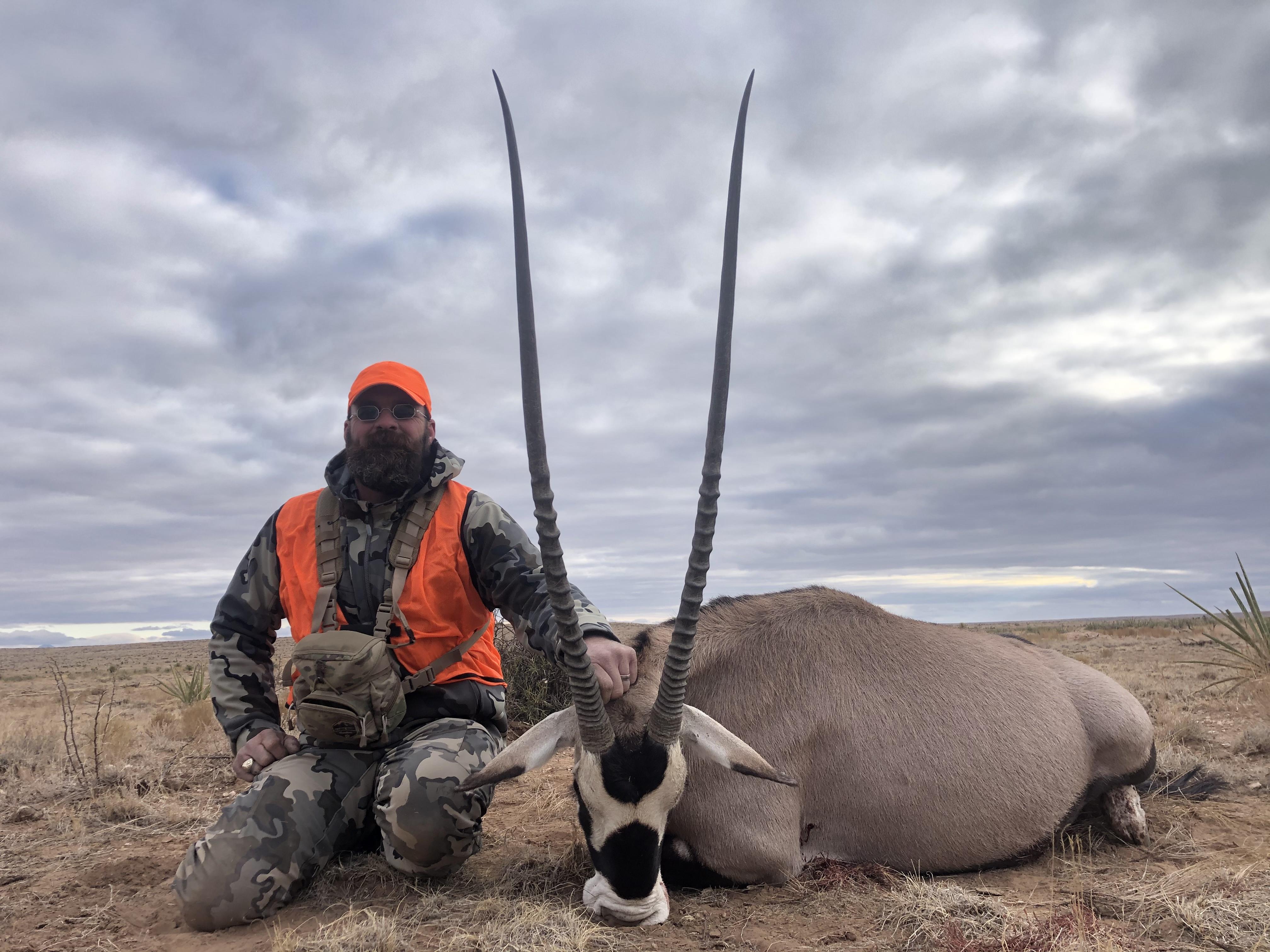 Congratulations, hope you have high ceilings for that shoulder mount!
L

Wow, what a beast of an oryx, congratulations!

That is such a dream oryx! This might be an unpopular opinion but I would much prefer a 40”+ cow over a mid 30s bull. All oryx horns look long but the sabers on a mature cow are insane!
K

Congrats! Crazy she hadnt broken one off yet.

Congratulations ,and great job thats a beautiful animal.I used to see them alot when I was teaching at White Sands back in the day.

Wow! What a beauty! Congratulations and your hard work and persistence obviously paid off!
G

My friend shoot one over in the same spot and the meat was probably the best game meat i have EVER eaten!! congrats..