Over pressure? but i don't understand this!

Some quick findings...I used the 375 comparator bushing to measure the cases.


My thoughts are Benchmark powder has a pressure spike at just over 28 grains in this barrel length, even though the Hodgdon max for the 107gr SMK is 29 grains. But according to the load data they use a 24" barrel for testing.

Is it hot when your shooting?. Refering to the pressure spike.(I still have snow in my yard). But your in TX i see.
C

Gerard Schultz said:
The signs of pressure and headspace are identical and only a chronograph will tell the difference. If it is headspace the rifle could be at fault or it could happen in the loading process.
Click to expand...

Both of the above loads shot great at 400yds...

My thoughts are the 107's were slower because of pressure loss from blown primers...3 of the 5 fired for thechronograph lost the primers.
C

whirlwindjml said:
Is it hot when your shooting?. Refering to the pressure spike.(I still have snow in my yard). But your in TX i see.
Click to expand...

Have you pulled any of the other bullets and checked the load yet? No mixed up powders? Zeroed scale, all that? I haven't pulled the wrong powder one (yet) but I did load a .338 WM 250 gr. bullet with 210gr. data... ruin't that piece of brass and nearly my nose. Made me a lot more careful reading my own notes!
Whatever you find, please do let us know, tjis is very interesting.
Cheers,
crkckr
C

I have the hammer style bulle puller, but I put a piece of foam in the bottom to protect the top of the bullet. Benchmark is such a fine powder, I'm sure it will get stuck around the foam. So I won't get a true reading of the powder.

I ordered a RCBS collet puller, but the picture lead me to believe I was getting the die with the collet...WRONG...it was only the collet! Even the picture shown with the tracking info shows the entire set!

So I ordered the die last night. Tracking says Thursday.

crkckr,
I'm sure I used the right powder, it was my first time to use it in the Grendel. One odd thing about reloading for it...the powder charge is almost the same with the powders I use. IMR8208, H335 and Benchmark use the same powder weights depending on the bullet. So even if I did it would screw things up much.

I was loading for a grendel for deer and some coyotes last year. I did use benchmark, it was the most accurate but I was shooting (95?) vmax and 100 gr partitions If I remember right. But I do recall the benchmark load for the vmax was 30.2 gr (Over book max), it shot well and didn’t really show anything weird. No ejected swipes, primers were fine etc. But the 100 gr partition showed some pressure signs before hitting book max. I do not remember exactly what charge it was. I like benchmark in that little caliber, but from all my reading and little experience it can be a trick to load for. I will say if you decide to try 8208 ( awesome for grendel). Be very cautious because it spikes out of nowhere. Good luck.


Btw the 95 vmax out of the grendel is an absolute hammer on coyotes. I only used it on 3-4 but it puts them down so incredibly fast it’s insane. Shot one at around ~380 and I swear that bullet picked him up and body slammed him.
C

Hmm, CaptnC, it must be that voodoo part of reloading I've mentioned in the past. I'd like to believe it's all based on science and that if we all followed all the rules and instructions all the time, we'd all get perfect, and similar results. Thing is, t'ain't true! I've run into a few weird things over the years that just shouldn't of happened (or should have but didn't) without any reasonable explanation. But keep digging, this is one for the books!
Cheers,
crkckr
C

T3,
The H335 has been the easiest for me to load. Just about any bullet...just about any powder charge shoots decent. 8208 I burned a whole pound between the 18" and 20" before I got the good accuracy that had low SD and ES.

The Benchmark shot good with the 120's...the 107's just have puzzled. It's obviously over pressure and that group of cases are on their last leg.

I had a bit of a brain fart while at the range. I had my 18" with me in a double gun cases, so I could have ran a shot or two through it to see how it shot.

I do plan to load the 107 load into some fresh cases and run a couple in both of my other Grendel's.

CaptnC said:
my load was not up to max book velocity but well below it at 2490fps.
Click to expand...

Velocity is no indication of pressure.


CaptnC said:
When I get a chance, I will be pulling the bullets to see if the powder charge is correct.
Click to expand...

Great idea. Look for tumbling media that may have been left in the brass.

Have you checked to see how long you can actually seat those 107 MKs before you run into the lands? Over on the Grendel forum there were post at one time of people getting BCA barrels with short throats.

Your brass photo shows you were very lucky that the brass held.
Last edited: Mar 27, 2019
C

CaptnC, were these cases by chance annealed? Without something else going on with the powder or the bullet touching the lands... as the little robot said, "Beats me!" What the hey, while we're guessing, put a mic on the bullets & see what it reads. Since this is only happening with the 107's... there has to be a good, reasonable, explanation for brass to flow like that. Honestly, I, and I assume everyone else, would really prefer not to leave this one to voodoo!
Cheers,
crkckr
C

Been pulling 13 hour shifts for the past two weeks so I don't get much time when I get home...hitting the sack at 11pm and bouncing back up at 3:45am....

Any way...if we have nominations for the Darwin award, I'm in and after this post will be the crowd favorite to win it for the next few year...yes this one will follow me or should I say haunt me for many years!

Got the RCBS puller in to go with the collet I bought thinking I was getting both by the ad on Amazon. As you will so see..."thinking" is a key word here!

Ok...pulled the bullets on 9 loaded rounds. One was tossed because the primer fell out in the ammo box. Like I said this brass is my original brass from a year ago and have seen two pounds of powder burned in them.

Ok...two digital scales out...zero'd and ready....each charge gets two weighs alternating between each. Two were 0.1 off the rest spot on...powder charge is GTG for what I intended to do.

I back off each load to 27.3gr and push a 120 Sierra Pro Hunter down on it. Getting late...wife has already reminded me it was getting late. I'm thinking...I need to measure the diameter of these bullet... ****, calipers are in the kitchen...I'm in the garage...but hell...I have two scales sitting here... 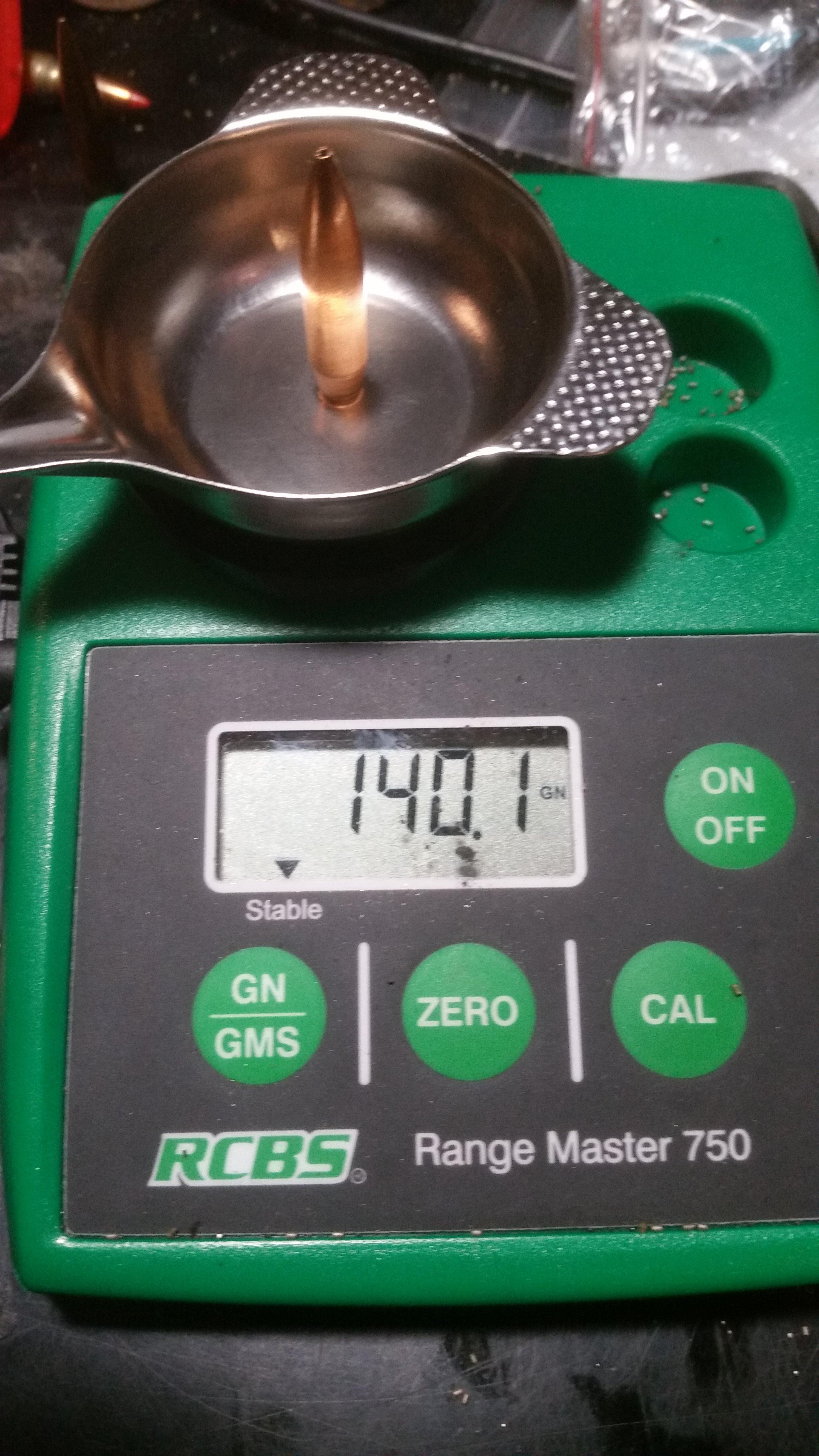 My eyes popped out of my skull like a in the cartoons...so I grabbed the box of bullets I had used last Saturday.

What a screw up! I had been using a box of 140 SMK and the 107 SMK to anchor a light over the area where the scale sits to help me see.

NORMALLY the label faces me and the 107's always stay on top. It's jus the way I like to stack thing...heavy on bottom...lightest on top.

Well Saturday for some reason the labels were facing away from me, so I grabbed the top box and loaded 40 cases for Sunday. I'm lucky that I didn't get to meet my maker that morning!

I must give a little credit to Bear Creek Arsenal, that their side charge upper and barrel could handle the massive pressure I put on it...for 10 shot!

So mystery solved...I loaded 140gr bullets where 107gr were supposed to be.

Not that this is an excuse, I got up super early after staying up late Friday night getting the cases ready for Saturday morning!

I weighed half of the loads three times...sometimes I go back and reweigh the powder charge in a row or two in the loading tray just to make sure everything is dead on...

G
So I have a 6.5 build but he said I would need an adjustable gas block
2

K
Is this rifle any good?