Over pressure? but i don't understand this!

Quick little back ground, fell head over heals for the 6.5 Grendel last year and I can't stop!

Just bought another barrel and complete side charge receiver. This time 24"...my goal is to have a 400yd 6.5 Grendel AR.

I seen a video of a guy shooting a bolt Grendel using Benchmark powder. He was over max without issue with great velocities! I have some Benchmark so I figured...long range...a little faster velocity...sounds like we might have something here.

So I loaded up a 50 count of ammo. While nothing scientific I normally drop back 1 grain from max for 107 SMK group, then another add .3 for the next group of 107 SMK. Still well below Hornady max (thier book is very conservative). I also loaded a small sample of heavier bullets 120gr Pro Hunters the same way.

I was not do a normal break in because I'm too lazy to break the side charge down after every shot. I planed to shoot 5 and then clean.

Well the bolt will not open on shot 5. My bad I never looked at the brass in the brass catcher on shots 1 to 4. With a caming style bolt I was a bit lost as to how to get it out. So I tore the whole gun down on the shooting bench.

I didn't have my armorers wrench, but I managed to get everything apart.. I finally got the case out. Primer was blown...a little separation at the web...post firing...you could tell I pulled it apart.

Check the 4 in the shell catcher...2 blown primers in there! Put the gun back together and put the magnetospeed chronograph on barrel. It confirmed my load was not up to max book velocity but well below it at 2490fps.

Ok now for the weird part! Life was back to normal...no more blown primers, no more marks on the case head. And the weirdest part, velocity was 27fps faster with nearly a grain less powder, with 13 grain heavier bullet!

So why did the gun have suchad issues with the 107 Sierra MK. I've shot them out of both my other AR Grendel's without issue....

Oh...here is a little gun pronounced for those who didn't mind wading through everything! 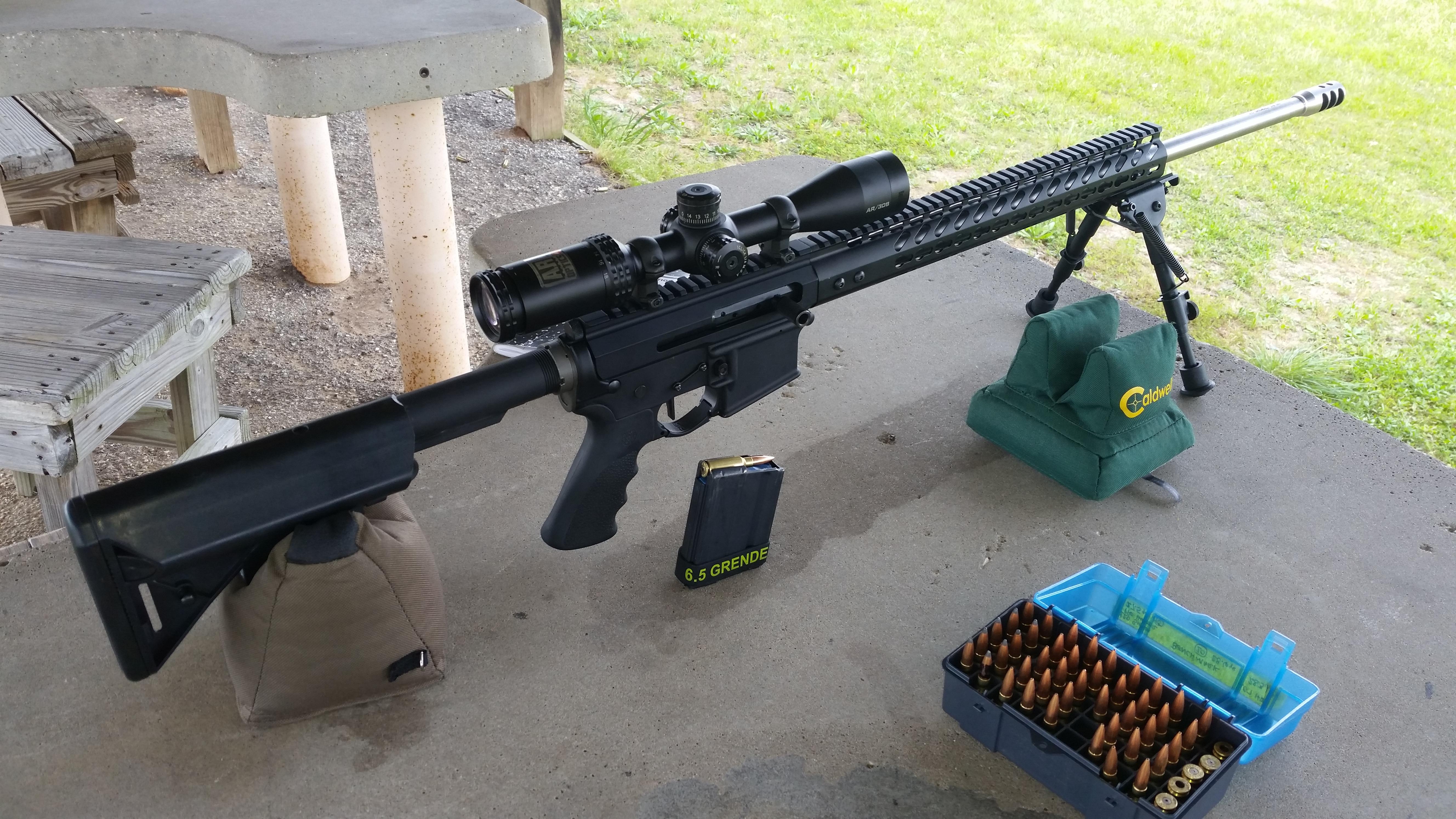 I think I have some of those bullets, but I was looking for a high BC (for a lower weight 6.5 bullet) for shooting steel out to 600yds that would run close to 2600fps.

I was busy trying to come up with a explaination as to why I had case failures and didn't go back to see what my velocities were on the 123 SST H335 out of my 20" 5R barrel. They shot roughly MOA at 200yds and rang the 8" at 400yds without any trouble.

One possibility to be checked out is to be sure that your bullets are firmly tensioned in the neck. I had a similar issue years back with my 6mmAR(necked down 6.5 Grendel) which drove me crazy with “random” pressure peaks. The heavier bullets, 107gr 6mm SMK) we’re jamming into the lands caused by the inertia of the rifle cycling , thus increasing pressure. My reloaded rounds seemed fine when testing the seating tension when the tips were pressed against my wooden bench......they weren’t! A switch to Lapua 6.5 Grendel brass with its thicker neck wall fixed the issue. Not sure if this is your issue, but your symptoms might warrant checking this out.
C

Thanks. The 120gr bullets were in newer Hornady brass. 5 of those cases were once fired. All of the 107's were in the original batch of brass.

I'm going to try to get a picture of the case at some point today too...
C 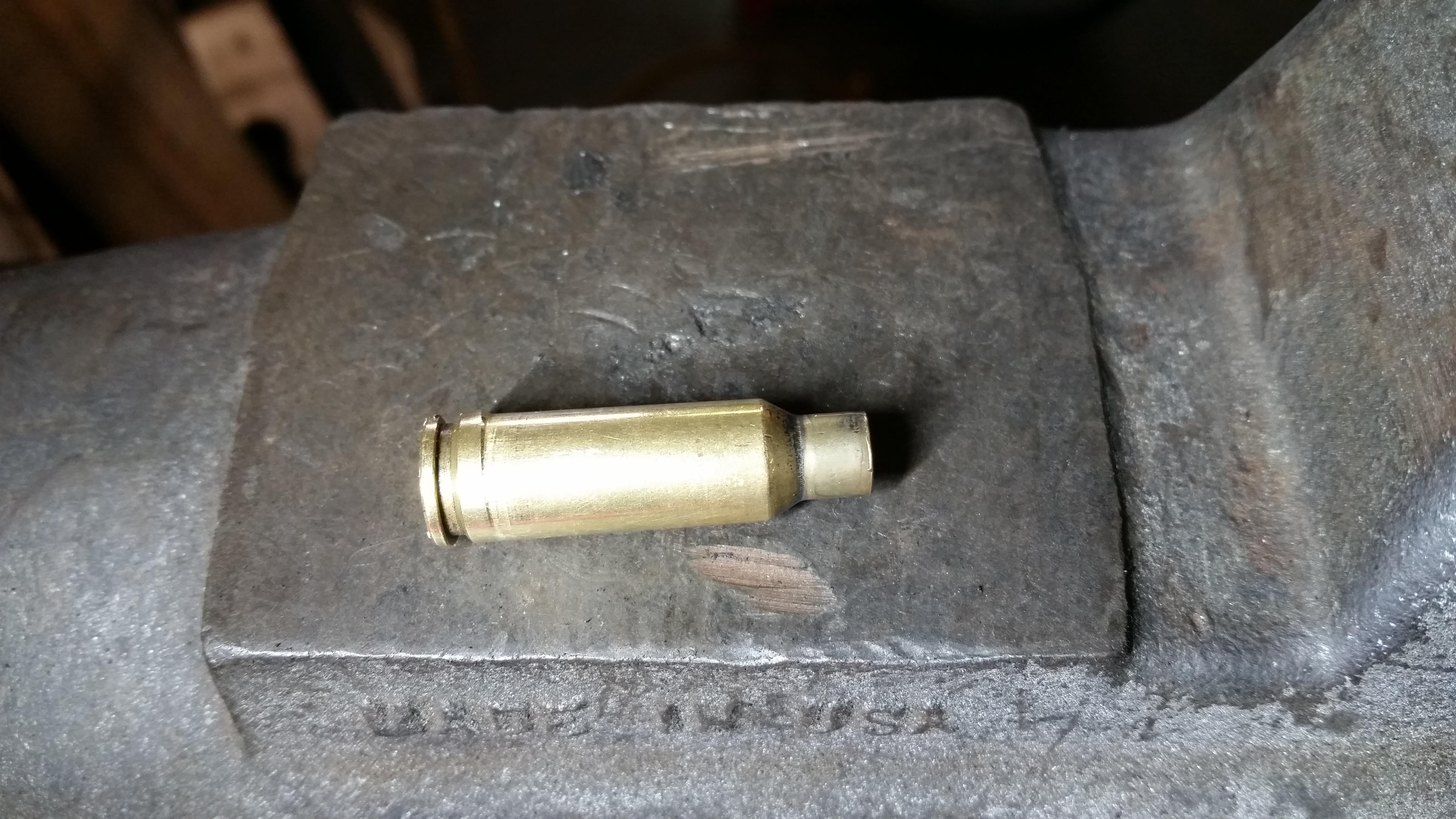 Starting to think is didn't quite chamber all the way

I need to check the head space on second one that stuck.
C

Well the bolt was closed all the way. I checked the second case that got stuck. The first case I was a bit rough getting it out.

I measured the case with my comparator and the head space was right on.

When I get a chance, I will be pulling the bullets to see if the powder charge is correct.

Turkey season starts next weekend...so I will be busy with that for the next month. 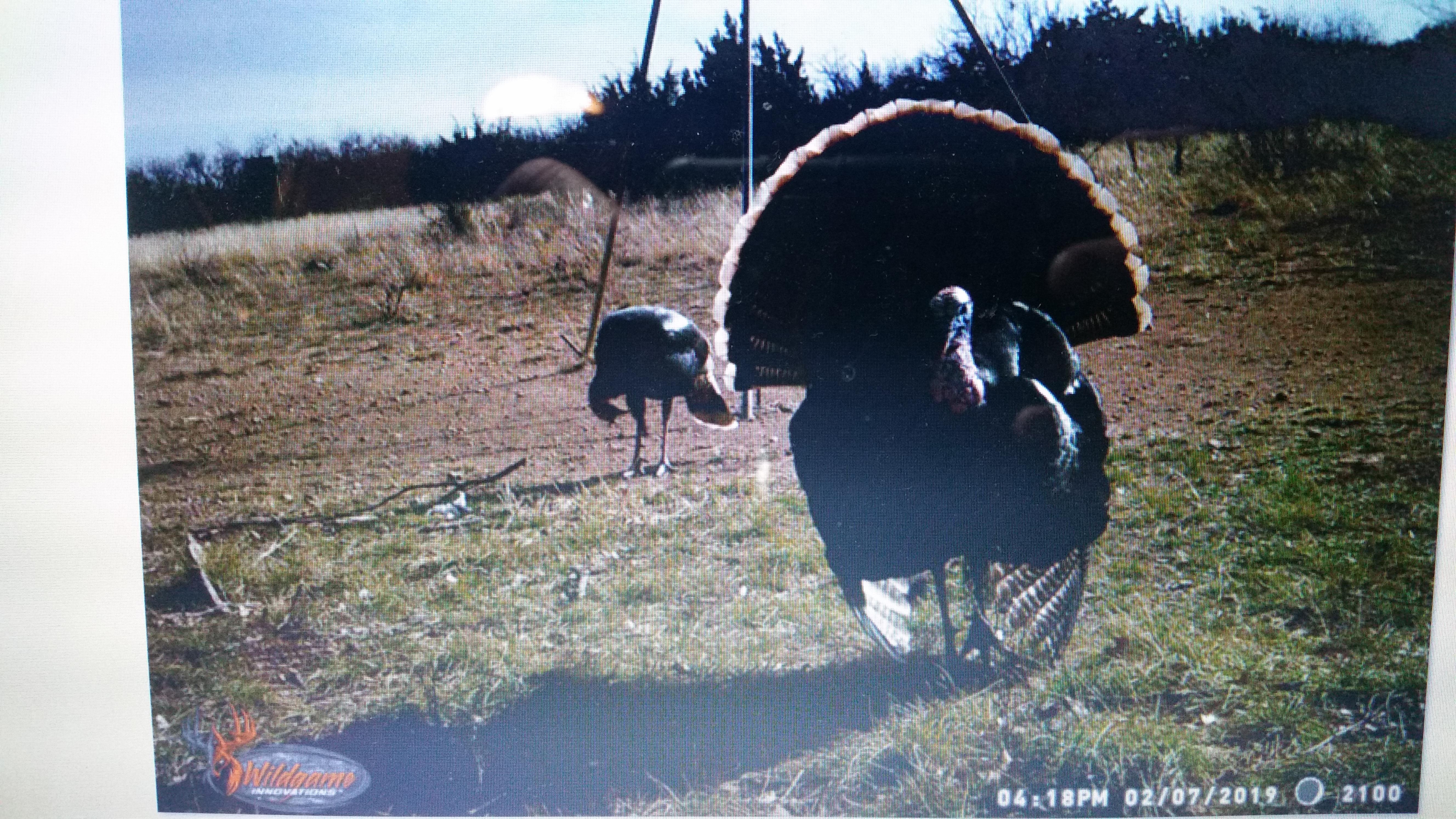 This could also prevent the bolt from closing all the way into battery without hitting the forward assist which "Could seat the bullet a little deeper and drive it well into the lands. Pressure normally goes up and velocity normally drops with these conditions.

I would check the amount of freebore with these bullets at Mag length.

That ring just above the rim looks suspicious. Is there a possibility the cycle of stretch, bump back to length is causing an incipient separation.

If so, it may be time to retire that batch of brass.

Just be aware that the Grendel has a couple different chambers/bolts. There is type 1 and type 2. From the looks of your brass, I think you’re running a type 1 chamber with type 2 bolt. The difference is (type 1- .125 bolt face depth)

Type 2 is .136.... so the belt you’re seeing is quite possibly excessive headspacing by about .011. That most definitely will give you exactly what you’re seeing
J

T3ninja said:
Just be aware that the Grendel has a couple different chambers/bolts. There is type 1 and type 2. From the looks of your brass, I think you’re running a type 1 chamber with type 2 bolt. The difference is (type 1- .125 bolt face depth)

Type 2 is .136.... so the belt you’re seeing is quite possibly excessive headspacing by about .011. That most definitely will give you exactly what you’re seeing
Click to expand...

I will pull the bolt and measure it.

When I had my comparator out I should have measured a fired case from one of my other Grendel's. Will do that tonight too.

I know it can't be assume, but the barrel and bolt came from the same place and we're bought together.

This could also prevent the bolt from closing all the way into battery without hitting the forward assist which "Could seat the bullet a little deeper and drive it well into the lands. Pressure normally goes up and velocity normally drops with these conditions.

I would check the amount of freebore with these bullets at Mag length.

They are loaded to mag length, but I blacked a loaded round and chambered it to make sure I wasn't into the lands but it could be very close.

The signs of pressure and headspace are identical and only a chronograph will tell the difference. If it is headspace the rifle could be at fault or it could happen in the loading process.

Dont flame me this confession: a couple years ago i proudly hauled my new norma ultra brass id been waiting for (shortage) to the bench. Reach by (not in) the big box of primers and started loadeing 5 shots haul to the range. Then i tested them and was having extreme pressure signs and blowing primers (erratic chrony numbers). This was a milder load normally. I backed off a lot and tried again. same. scratching my head and frustrated i was back at the bench reading my logs and zoning out staring at everything when i noticed the winchester primers were pistol primers. I usually only buy bricks and dont know when i bought those 1 pack (probly when obama got in i bought everthing i could get) but they fit and the box was identical to the others exept the letters. The pistol primers couldnt take it....Anyway worth double checking.

Also... On my grendel ar15 i had to play with different buffers to get 100% cycle reliability. When it wasnt cycling great it was skrewing up brass in funky ways.

G
So I have a 6.5 build but he said I would need an adjustable gas block
2

K
Is this rifle any good?