This weekend, I started taking headspace measurements on some 223 cases in my stockpile in various states on the way to being reloaded, in hopes of starting the process of setting up my new Dillon 650 for reloading 223. I measured unprepped and prepped cases, as well as fully loaded rounds (definitions included below). All of the work done on the cases was performed on a Lee Turret press.

The observations which do not make sense to me, are that:

Data is for headspace dimensions measured for 223 cases in various states in the reloading process.

There are uneven numbers of cases in each category because I just grabbed a random number of prepped and unprepped cases from my reloading bins, and there are 30 rounds in the loaded column because I went through and measured what I already had loaded in a magazine.

twadsw01 said:
2) the prepped(sized) cases have - on average - a longer headspace than that of the unprepped (fire) cases.
Click to expand...

On firing, the case body expands outward, pulling the neck/shoulder back.

twadsw01 said:
1) the fully loaded rounds have a shorter headspace (length from case head to the "datum" on the cartridge's shoulder, 0.330" diameter) than the prepped cases (cases which have been sized and primed ONLY),
Click to expand...

Not normal. If crimping to much, the neck/shoulder may be pushed back. Or any die making hard contact.

A bulged shoulder may keep the rounds from chambering.

A Dillon shell plate may full length size differently at each station. The deck height .125" may be different at each. Has a lot to do on what station the FL die was adjusted on. 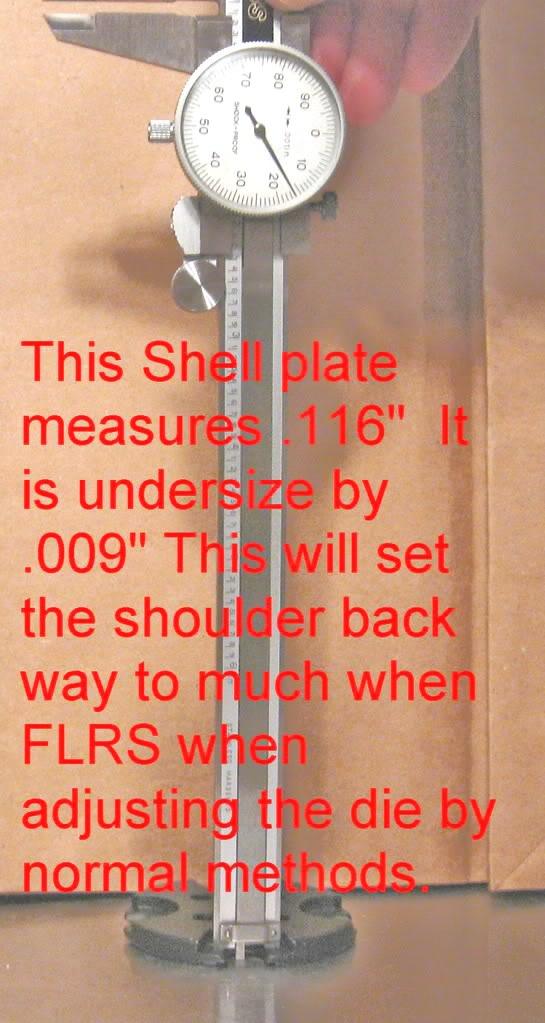 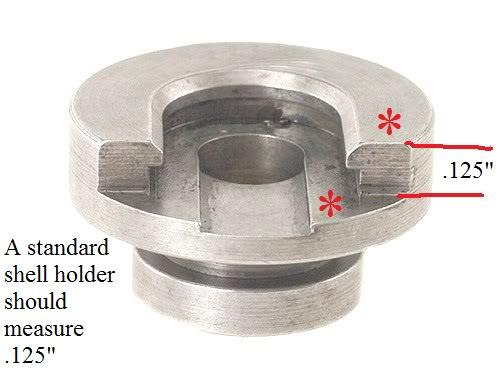 I would guess a pull thru button neck sizer would lengthen the case. Bullet seating might return some of that value.

IMO, if mixing brass you shouldn't FL size until it's at least fire formed to standard dimensions -that you might FL size from.
You shouldn't over size anywhere with any die, and you shouldn't ever FL size necks.

What variance do you have in trim lengths with all this?
D

but if you are using the 650 to get these weird -0.010 measurements at shoulder -- maybe you are pushing up too far on your powder funnel tube in the powder station -- the power funnel tube surrounds the neck & goes down onto the shoulder when pushing up -- if you dont have that height set right it may actually stop at full down stroke and be squeezing at shoudler ( case pushes up into powder funnel to lift & engages the powder dump )

Are you seating and crimping in a single step? I personally don't like doing that (not that I crimp my rifle ammo anyway) - it ends up that you push the bullet down at the same time the die crimps the case mouth, which seems to me to counterintuitive to not changing dimensions.

You might try resetting your seating die to not crimp at all and see if you're still losing base to datum length. If you're not, readjust to crimp but not seat and see if you lose it there. If neither of those case a change, it may well be the combination that's causing the difference.
T

Thanks for the help, guys.

I took some additional data in totally unprepped cases...

So, here is some additional data, which indicates that my initial measurements prompting this thread might have been erroneous in some way (maybe not zeroing out the mic, etc., etc.,?). I took twenty cases from totally unprepped through the reloading process, sans powder and primer. The purpose was to be able to see how individual cases were effected by each step in the process.

The same process as I normally employ for reloading was used, and I did not ensure the inside of the necks were lubricated (simply due to the fact that I wanted an apples-to-apples comparison with the cases I originally measured for this thread).

I will dump the raw numbers (screenshot form), and two box plots, showing length and headspace after each reloading step (where applicable - e.g., did/can not measure case length after a bullet has been seated).

In my opinion, nothing looks out-of-place here. Cases lengthen after sizing then the longer cases are indeed being trimmed while the shorter ones aren't touched by the trimmer - this is readily observed by the box plot, where it appears that simply the top of one box has been lopped off, leaving the bottom untouched. Also, unprepped cases starting with longer headspace get bumped by the sizing die, while shorter headspace cases do not, and none are being bumped back an undue amount, it seems (0.002" on average).

There are still some high outliers in the headspace category, which could be explained by the spring back phenomenon, possibly.

Of note is that the one case that started with shorter headspace than where the sizing die was bumping all the shoulders back to - case 18, 1.461" unprepped headspace measurement - this case's headspace actually became longer in the sizing die, as expected because of the brass growing while being inserted in the die, but the shoulder never being setback by the die. Is this a concern? I.e., could this case the head of the case to become unduly weakened due to the brass never being 'crunched' back down at the end of the stroke?

Does anything look strange, unexpected, concerning about any of this?

Also, thank you, everyone, for all of the input into this thread. I appreciate it.

U might lookup the def for hdspace, then start over w ur concerns.
T

It's that sarcasm? I cannot tell.

Is there something to be concerned about here?
S

Oh man, I apologize. Please suggest the correct terminology or, by all means, refrain from reading. I hope you did not feel compelled to continue to read past the point of what was tolerable for you.
T

I am not seating and crimping in a single step; I have a Lee factory crimp die as the last stage on the turret press.


divingin said:
Are you seating and crimping in a single step? I personally don't like doing that (not that I crimp my rifle ammo anyway) - it ends up that you push the bullet down at the same time the die crimps the case mouth, which seems to me to counterintuitive to not changing dimensions.

You might try resetting your seating die to not crimp at all and see if you're still losing base to datum length. If you're not, readjust to crimp but not seat and see if you lose it there. If neither of those case a change, it may well be the combination that's causing the difference.
Click to expand...

Apology accepted. Now, b sure to understand hs. Otherwise, ur ****in' into the wind.