Need some help identifying a rifle

Do any of you recognize this symbol.
A guy at our local electrical shop was given this rifle from his neighbor when he passed but doesnt know anything about it.
Any help will be appreciated.
Thanks Trell

Its a mauser style action for sure. That there is no question. I have a book that is supposed to have all the mauser actions in it. Looks like I my need to dig it out.

The symbol I have have never seen.
L

What caliber is stamped on the barrel?
T

Thanks for the replies.
Ckgworks enfield or ruger was my first thoughts
Nemthunter never seen the stamp before either
Laelkhunter no marking on the barrel other then the same symbol that's on the action

It actually is probably a 1917 Eddystone.....US Ordinance copy of the P-14. The Flaming bomb Stamp is a US Ordnance Stamp I believe. When the 1903 production couldn't keep up, They modified the P-14 to take 30-06. Quite a few of these were sporterized back in the day......They are a very strong action, Verify Caliber with a chamber cast! You never know what they got chambered in, but originally most were 30-06. They above info is rough off memory so might be slightly off.....but should be generally close.

The symbol is Enfields mark. Its a Model 1917 Enfield auction thats has been sporterized. Remington did make auction like it though. BUT I do not think it had the Enfield symbol

I had to go google a bit......I don't know if I can trust my memory anymore! Here's a link to a Eddystone with the same bomb marking.....That same bomb stamp is often on Trench shotguns from the same era, with a US under it, So I don't know if it's a US stamp or a Enfield........Weird things happen in war time stamping and sometimes it can be hard to decipher them. In any event, from the little you can see in the pictures, it looks like it was nicely done, not Bubba job.....Figure out the chambering and tell him to enjoy it for what it is........Many people now don't understand the era these guns were from and can't understand how someone "wrecked them" by sporterizing them, but at the time it was the way to get a quality hunting rifle on the cheap! I kinda have a soft spot for these old sporters......It started from getting a old 1903 from a family friend when he passed that he had converted to 308 Norma Mag.....He packed that gun all over Washington and Alaska during times when everyone had more time than money.

Ckgworks said:
It actually is probably a 1917 Eddystone.....US Ordinance copy of the P-14. The Flaming bomb Stamp is a US Ordnance Stamp I believe. When the 1903 production couldn't keep up, They modified the P-14 to take 30-06. Quite a few of these were sporterized back in the day......They are a very strong action, Verify Caliber with a chamber cast! You never know what they got chambered in, but originally most were 30-06. They above info is rough off memory so might be slightly off.....but should be generally close.
Click to expand...

You got it right. I have one that could be a twin brother to this one. Even had the same Redfield base. Mine is chambered in 35 Whelen. If you ever remove the scope base you will find out who made it. Rem, Win or Eddystone. It’s marked on top of the receiver but hidden by the base. Looks like an aftermarket barrel so as others have suggested, find out what it’s chambered for before just assuming 30-06 and dropping in a round. FYI. If he ever wants to replace the Redfield base with a rail he’ll probably find it’s an odd ball. Mine was for a pre-64 Winchester H&H. Seems they had the correct screw spacing to reach across the receiver. Tell him he’s got a keeper!

+1 on the flying bomb being US Ordnance. There was an article about some flying bomb marked guns in a recent edition of the American Rifleman. I believe it was about Enfields.
D

My vote is the 1917 Eddystone . This action looks just like one that I had when I was young .
First centerfire rifle that I ever shot , was in .30-06 . I was 12 years old in 1962 , and my Uncle ( Mother's brother ) , allowed me to shoot it .
3 shots , Remington 150 gr. Corelock ammo , sitting on my butt on the ground , elbows resting on my knees , open sights , 100 yards , all 3 shots overlapping each other in the tiny red x in the center of the target . I HAVE NOT SHOT THAT WELL SINCE . My Dad bought it from his brother-in-law for $ 50.00 , for me , and we took it to Buck's Gun Shop here in Fort Worth , Texas to have the receiver drilled and tapped for scope mounts . Buck fitted it with 2 piece Weaver bases ( cross-slot , like picatinny ), Weaver low mount rings with a big thumb-screw to tighten them , and a Redfield 4X scope .
Trigger was military 2-stage , very smooth take-up , and perfect clean 2 pound break . I would regularly remove the scope from the bases , to carry the rifle in a shotgun case , and then re-attach it to the bases to hunt . I zeroed it 3 inches high at 100 yards , when the scope was first installed by Buck , and NEVER had to re-zero it again . It ALWAYS shot to the same point of aim . QUITE LIKELY the most accurate rifle that I have ever shot .
Buck the gunsmith said that he had never seen a barrel like this rifle had , 8 lands rifling that looked similar to Marlin Micro-Groove rifling on Marlin 336 leaver -action rifles.
Sadly , it was stolen when our home was burglarized in 1975 .

Looks just like the sporterized 1917 I had. Mine was a Winchester. Take the scope base off and you will see who made this one.

1913 eddystone Enfield. I built a stock for one that my father had chambered in 35 whelen Ackley Improved.

I have been told some of the older ones were built with some weak steel, perhaps do some research and see what years/manufacturers may have done this, so you know what kind of loads you can safely run in it. I'm no expert, this is jist what I have been told. 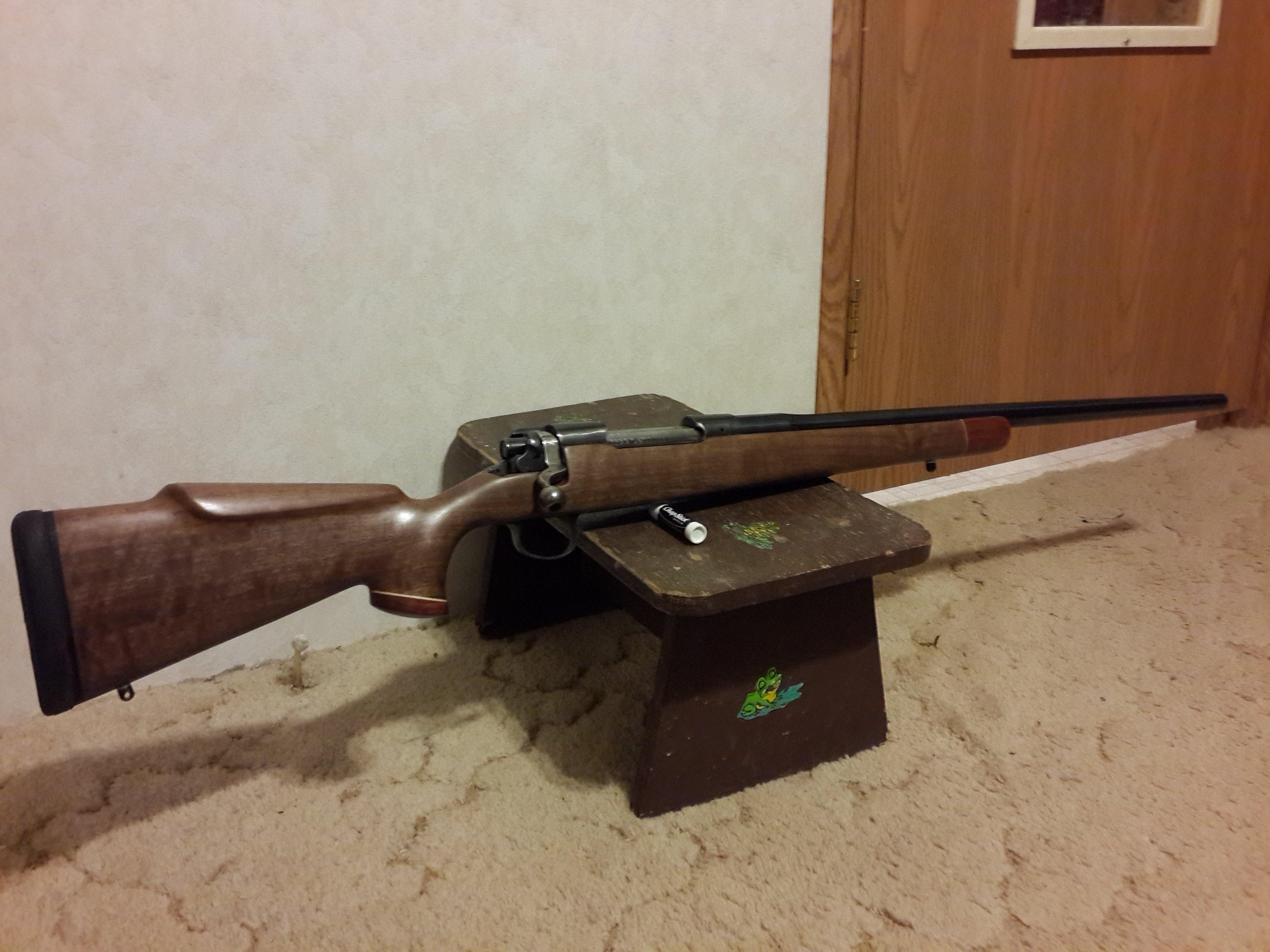