I'm assuming that the covering over the moose's rear was to keep the sun, and therefore heat, off the meat? I've had to do that many times especially when I'm alone because it takes so much time to process a moose. While I've had plenty of snow falling I've been lucky to not having to deal with one in the rain. Is that not luck? Nice bulls all and the very best of meats!
L

Have been on 5 moose hunts to Ontario Canada. These were fly in drop camp hunts just me and my brother. Where water is the only transportation shooting moose close to water is like shooting them along your highway, Kill them in your road a no no. killed one in a beaver dam, a lot of work. My brother shot one along the edge of a lake from a canoe. Third shot broke the bulls back and caught the aorta vessel. He was down and dead when we got to him. On dry ground, 4 steps and over the canoe lay down a quarter. Easy one. Have a moose trip to New Found Land set for Oct 5th. this year. Hope to make it to Alaska on a moose hunt, Before I go for the dirt nap. Debating with myself 9 1/4 lb. 338 WM or 7 1/4 lb. 300 WSM both stainless/ synthetic stock. How much walking I have to do will be the breaker. Decisions Decisions.

Location
South of I-10 in Texas

7mm Rem Mag, Zeiss Diavari 3-9X36
Federal Ammunition: Sierra Game King 165 gr boat tail
~250 yards
4 shots (1 square in the chest, 3 in the left shoulder blade) He never took a step (except when he turned broad side) Fell right there. 2 bullets were recovered in the right shoulder blade. Chest cavity was in a glob. 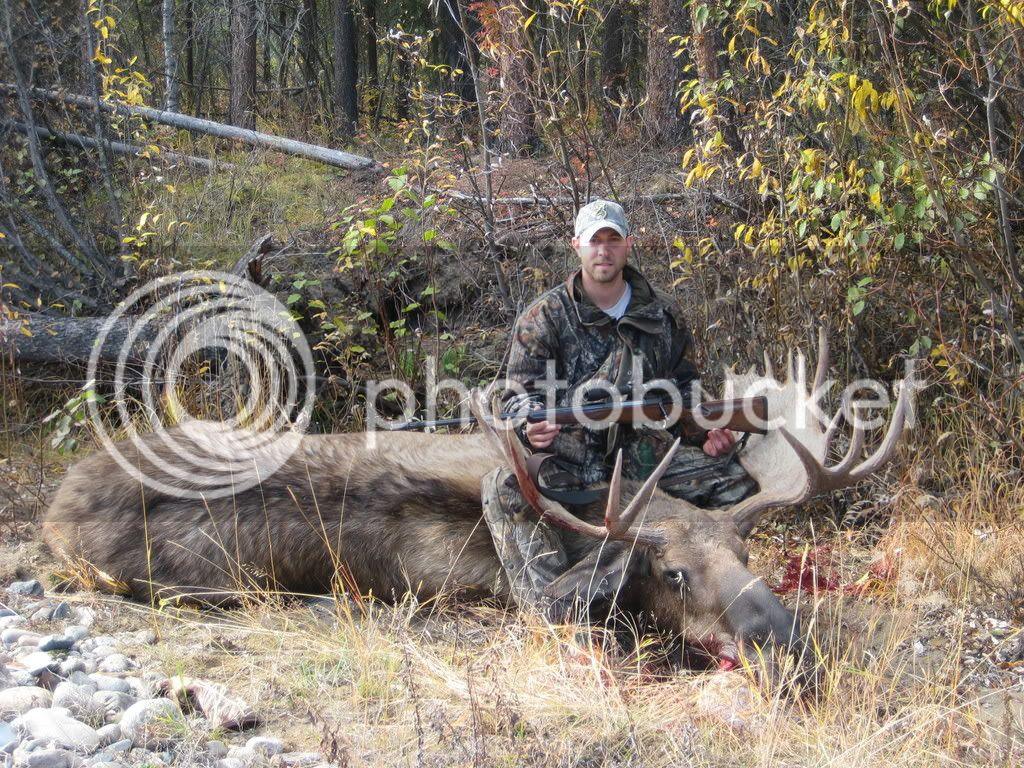 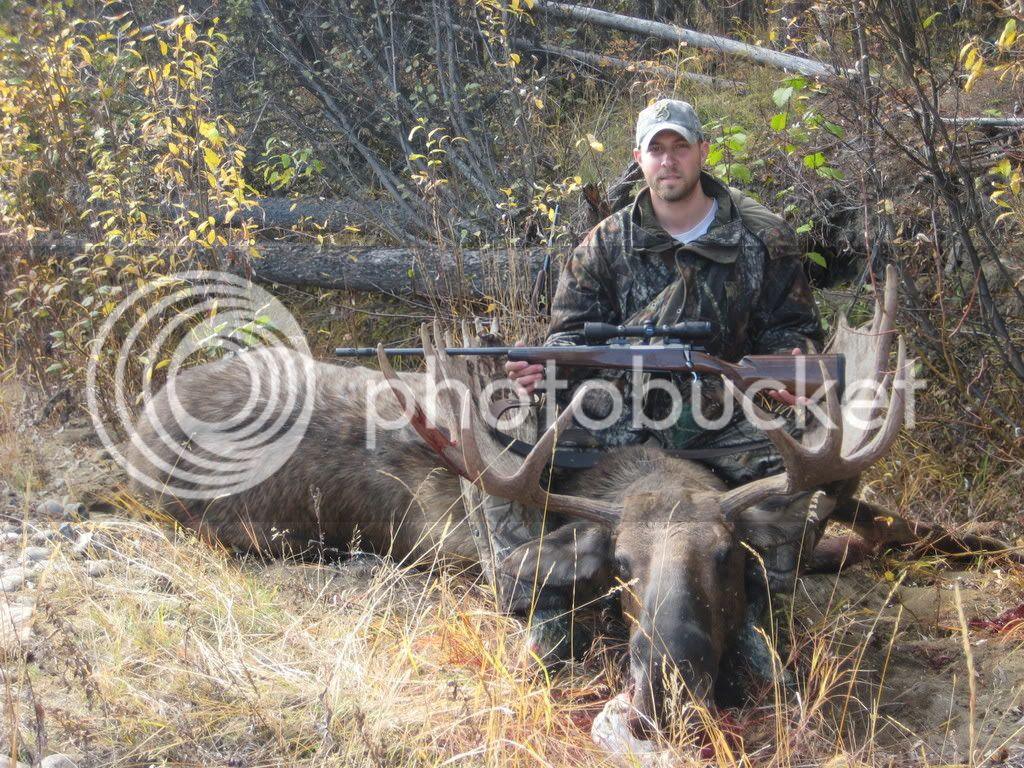 Nice.Where did you get him?

Location
South of I-10 in Texas

Pa Grizz said:
Nice.Where did you get him?
Click to expand...

Thanks. That was in Alaska on the Salcha river; about 120 miles upstream from where it spills into the Tanana.

Congrts again.You gettig him mouted?I just got mine back.Now I have to find a place to put him.

Pa Grizz said:
A few moose hunts I have been a part of in northern Maine
Click to expand...

Nice bulls...and here they always told us your moose were smaller than ours. Sure nothing wrong with those, especially that one on the bottom right.
H

Booked a fly in hunt in Ontario for Sept. 2016. Boy, it's a long wait. Thanks for this post was great reading. My long range gun is a 300 WM Sendero, but I'm thinking of taking my 06 with 180 Grand Slam and Partition bullets. I shoot it really well and it's about 4 pounds lighter.
O

We hunt Ontario , for moose . This year the tag allotment has been cut away back , don't expect to get an adult tag. But we will go and have a good hunt anyway. We go as a family group including my grand kids. Grandson and Grand daughter both have their licences now. Shoot a few partridge, maybe do a bit of fishing. If we get a moose it is a bonus. Old243

204tcAK said:
moose hunt gear i have to take with me
living on the lower yukon river, there is no telling where you spot and drop a moose. along river / creek banks, meadows, bogs, marsh, ed

along with traditional hunting gear. there's a few item's we do not leave home without. two or three 8' x 10' poly tarps, heavy 100 ft rope and a come-along winch.

these are a few trips over the years where these items came in handy;

a 13 point on one side bull (massive bull) rolled into a deep and narrow creek along a lake, we split the rope into two pieces, tied one end up on the base of many brush and the other around the head and antlers connecting the ends with the come-along winch and cranked that monster out of the water.

one ran out into a lake and had to tow the bull into the slough, find a spot on the beach where the gradient slope was flat and tied the head to the bow of the boat and used it to drive the bull out of the water.

another was in a narrow creek which the banks were soft muck. half of the moose was out of the water, butchered top half then spread out a tarp and flipped the other half onto it on the muck. also did this on another trip where the bull dropped on a sandbar, tarp kept moose clean of sand.

now i'm not saying for you to bring these on trip's and try them, that's at your own risk. these are a few item's I don't leave home without.
Click to expand...

I had hunter tell me I carried everything ,but a kitchen sink.Guess what I had the next morning

Few of this years bulls

Grayson said:
Few of this years bulls
Click to expand...