So I got a new 7WSM barrel for my Desert Tactical Arms Stealth Recon Scout and with ASC coming up I figured I might need to get a load worked up for it. Because of the compact size of the DTA platform, I wanted to go with a little bit longer barrel so I could achieve my desired velocity range without being too hard on the brass. It's a 28" barrel that I'll send out to get spiral fluted here soon and it had a Liberty Pandora brake/suppressor attachment. Even with a 28" barrel, it's still shorter than a Remington LTR with a 20" barrel. Balance of the rifle is perfect with this barrel and I am very fond of the contour. I think I'll be doing more of them in other calibers to complete my arsenal of barrels that I can use in this rifle. One thing to note, the impact shift from the .308 to the 7wsm is 3 MOA high and 3 MOA left. Not that hard to remember and very repeatable. I took the barrel out between break in groups to clean it and when I put it back in POA/POI did not change.

For the load, I'm using CCI Large Rifle Magnum primers in Winchester brass. The bullet is a Berger 168gr VLD Hunting bullet seated to 3.015 which is just into the lands enough there is the slightest bit of resistance when closing the bolt. It's not so hard in that I cannot eject the round and both of those aspects were important to me. Since I am using the 338/300WM magazines I can seat the bullets as long as I want them. As the throat erodes I'll just chase it with the bullet and adjust powder charge as needed. The 168gr bullets are leaving the barrel at 3055fps @ 12' from the muzzle as measured by my PVM-21 chronograph. The bullets have a published G1 BC of .617 and I have not yet confirmed that but it appears to have been confirmed by Brian Litz with a G7 BC of .316. I'll shoot it at longer distances to confirm that in my rifle at my AO.

After working up a load using Dan Newberry's OCW method, I loaded a few rounds to confirm the load. It's a 4 shot group and it measured 0.166" center to center and under .5" outside. I'm pretty pleased with the results. 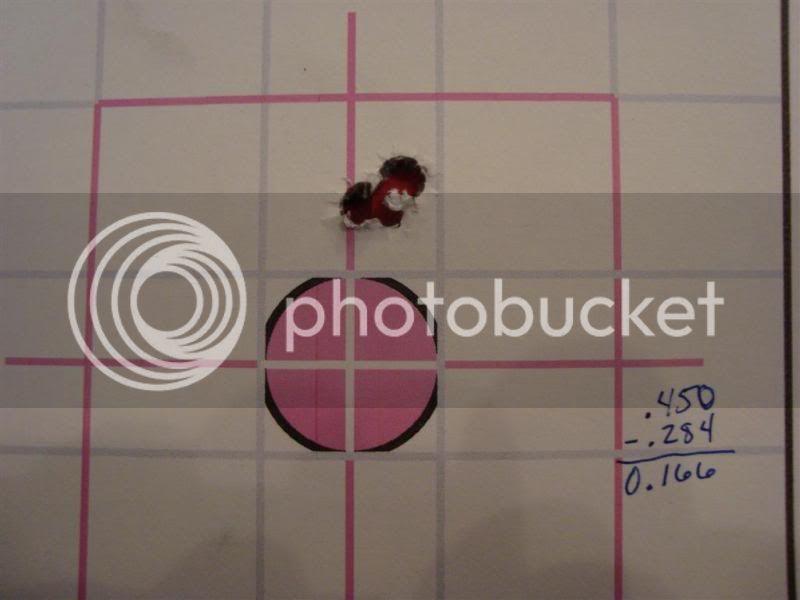 kguns11,
Which powder are you using and how much of it? My 7wsm will be back from the builder(PGWDTI) next week and am anxious to start developing loads, the Berger 180grs aswell. I won't have the luxury of seating my bullets out as far as you, as mine is a short action but will see how far out I can go when it comes in.
Great shooting by the way!
Ivo
K

My previous 7WSM was on a short action with Badger bottom metal and AI mags. I was loading the 180 Berger in Win brass 2.95" COAL. The powder of choice for most is 4831SC. You'll always want to work up of course, but I was using 62.5 gr H4831SC with the 180 Berger. Some folks like Re25 but I can't deal with the temp sensitivity of it no more. I'd rather be shooting than plotting temps in my data book.
I

Kguns,
I have about 5lbs of H4831sc, about 5lbs of RL25 and just picked up 15lbs of RL17(I figure its got to work in either the 7wsm of the .260AI). I have had good luck with H4831 in other rounds so I figure I'll try that first with the 168s and 180s and also give the RL 17 a try, its also supposed to be great in the 7wsm. Hope mine shoots as good as yours but the I think the seating depth will be the judge of that.
I'll be sure to follow this thread and report back when I get out to shoot.
Ivo
K

I'd be interested in how the Re17 shoots for you. It was supposedly designed for the Short Mags according to Hodgdon.