Breakdown of my DREAM rifle (what is yours?)

This is a thread I've wanted to start for years, because if you're anything like me, you're constantly building the perfect rifle for each situation in your head. Since I'm stuck inside on this rainy day, thinking about the fall, I thought I would breakdown and explain why I think I've created the ultimate rifle for hunting out west. Do you agree that I nailed it? If not, put in some effort and show us how you would create your dream rifle?

Base rifle: Kimber 84L Super America. I would look a used one, and the caliber doesn't matter because I just want it for the stock and action. This would be such a good donor rifle because you get a stunning AAA grade Walnut stock. The lightweight scaled down action is made to fit the 30-06 family of cartridges, so you're not packing around the extra weight of a generic action that has to be big enough to handle magnums. I'm aware the walnut stock is heavier and out of fashion these days, but I think it adds so much more character to a rifle, and I'm an absolute wood freak. It would be simple to have another carbon stock to swap out on the rifle if you wanted to take it on a sheep hunt or something.

Barrel: I would go with a 22" long Bartlein. I want one contour heavier then comes stock on a Kimber so it would not be as finicky when trying to shoot three or five shot groups. This should be a #2 barrel contour I think. My goal for the bare rifle would be about a 6.5 lb. weight. I'm sure everyone has their favorite brand, so I took advice from this article at Precision Rifle Blog.

Gunsmith Work: Since this is my dream rifle, I would not hold back on making it perfect. I would have a gunsmith true the action and lap the locking lugs. Then I would ask him to bed the action into the stock. To protect the finish I would have all metalwork Cerakoted in a dark color that matches the classic look of blued steel as closely as possible.

Optics: To keep this package simple, light, and traditionally beautiful I would get a Leupold VX-3HD 3.5-10x40 CDS-ZL. This is light at 13.5 ounces. The elevation turret is adjustable and has the all-important locking feature. The magnification range and 55 moa elevation adjustment will be just about right to make this a 500 yard capable shooting system. A set of 3 ounce Talley rings would be my choice to couple the optics and rifle together.

Caliber and Bullet: 280 Ackley Improved and 155 gr Terminal Ascent bullet. I won't make the mistake of calling this the "best" cartridge, because frankly I don't care about that argument. It fits into the Kimber's trim 84L action size and has a good mix of power versus recoil. To me the bullet is way more interesting. It has a relatively high BC of .586, and a moderate enough weight that it can be launched to 2900 fps. It's hard to find a bullet that mixes a tough internal construction with a highly aerodynamic shape. This will do a fantastic job on game from antelope to elk!

Rifle Support System: Guns on the lighter end of the spectrum can be hard to shoot accurately at longer range, which is why I always think about what kind of rest or support system I could use. My knowledge extends most deeply to the Spartan Precision Equipment product line because I'm a rep for them, but I'm always interested to hear other suggestions you have. The Javelin Pro Hunt Tac is my favorite bipod because I can keep it out of the way on my hip pouch when it's not in use, then attach it in two seconds with the magnetic mount. Height adjustment is similar to the ratchet style leg adjustments many of us grew up with, except this super stable bipod only weighs 8 ounces! To get a sleek and nearly unnoticeable bipod mount, I would have the flush fitting Gunsmith Adapter installed in the forend of the stock.

Conclusion: Wow, this was really fun to finally put my dream down on paper! A rough estimate is a little less than $4000 all-in to make this build happen. My rifle idea is the culmination of countless hours thinking about how to build something that's drop dead gorgeous, light enough to be a pleasure to carry, with a simple scope and support that gives me the confidence to shoot out to 500 yards. This isn't intended to start any arguments on what is best, or to put anyone down. In fact, I would love to see a breakdown of what your dream rifle would look like. Start putting ideas down on paper and let your imagination run wild! 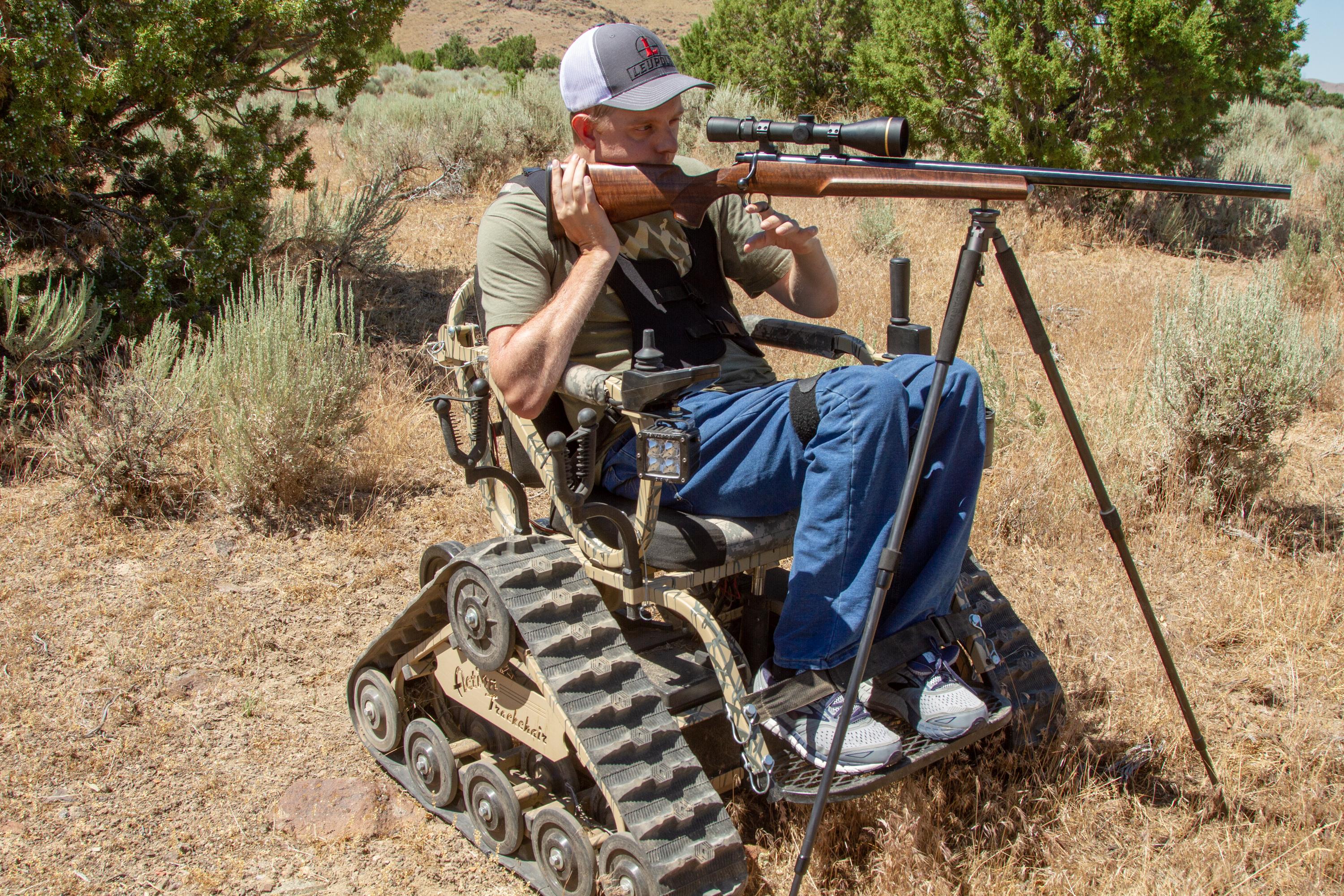 Nice, I've often dreamed of a setup like that. How has your accuracy been with that rifle?

280 AI is definitely a great candidate for a dream rifle!

Problem is I never have just a dream rifle and have built 7 already.

But this is what I’m looking at as the main next one;

Action is still up in the air between lone peak fuzion, and a bat vampire.
Barrel would be a bartlein or benchmark carbon if I could get them in the twist I need otherwise it would be a #5 fluted.
Stock I’m in debate still as well but really considering McMillan game warden, a3, manners eh1
Trigger would be a trigger tech diamond
Caliber is a 270 wsm pushing the 170’s


That said though I’m hoping in the next 2-3 years to complete another 3-4ish builds. I’d love to add a 17 to the line up to complement my 20 and 22. Basically I’m looking at adding a falkor 7even, bat vampire/bumblebee, lone peak fuzion, and ultimatum deadline action to the lineup so need to find calibers for jt
S

I've had 14 dream rifles built already, it is a moving target. Cartridge, weight, purpose, etc its all different.

A friend of mine had a .375 H&H built for him 40 years ago. Whitworth barreled action-(I know...)
Custom walnut stock, came with an old leupold 2-7. Magna ported. I've upgraded a couple of things but the first time I saw it, I declared, accurately, that it was a work of art. I bought it from him as soon as he offered it. Can shoot tight groups with Nosler's 260 grain Accubonds. Can usually cover three shots with a 50 cent piece at 300 yards off my hunting pack.

My problem has always been, I dream too much, and some have turned out to be nightmares!

I like the thought of the 280 AI. I think that is an excellent choice for a western and mountain hunts rifle. The Kimber is not a bad rifle either. Feels nice in the hands. My personal rifle for that purpose is a Sako in 270 win with a Leupold 3.5-10 on it, no bi- pod. I carry a set of shooting sticks or shoot off my pack. The Sako 85 carbonlite is an excellent rifle straight from the factory. In the newest Leupold scopes, which is an excellent choice, I would go with the VX 5 line.

When it comes to a dream rifle it would all be about accuracy, weight for me would not be a real consideration. I already have a couple that I have built on Rem 700 actions and have owned numerous others through the years, including one Niseka and a Dakota. If I were to build another one I would start with the gun smith.

If we are dreaming??? It is really hard to dream just one dream!!!

My ADD keeps kicking in!

A friend of mine had a .375 H&H built for him 40 years ago. Whitworth barreled action-(I know...)
Custom walnut stock, came with an old leupold 2-7. Magna ported. I've upgraded a couple of things but the first time I saw it, I declared, accurately, that it was a work of art. I bought it from him as soon as he offered it. Can shoot tight groups with Nosler's 260 grain Accubonds. Can usually cover three shots with a 50 cent piece at 300 yards off my hunting pack.

I had a Whitworth express in 375 H&H. It was an excellent rifle. It would shoot 1moa and recoil was mild compared to others I have owned. Those rifles should not be confused with the ones made by Interarms. They were assembled in England by hand and used FN patented actions. A custom one would be in my opinion second to none. The Interarms rifles sell for around $500, a Whitworth Mauser $1500. One with a custom AAA grade stock and barrel $2500 and up and I can guarantee it will shot sub MOA. Nice rifle!!!

I am almost there with my dream rifle, although I went a slightly different route with it. I love to tinker, so I want something that I can do most of the work on at home.

Barrel: whatever I want to order. Currently a bartlein m24 in 6mm creedmoor, but I can order a tube in any short action caliber and screw it on at home.

Stock: Currently a KRG bravo, want to upgrade to a carbon manners at some point

Scope: pst gen 2 as a place holder until I can get some really nice glass for it.

As I said, what is my current dream rifle is likely to change by next week, so this platform allows me to tinker as I go. I might end up with a sister rifle in a long action to give me flexibility on cartridges, but I am honestly more of a bow hunter than rifle and don’t plan on harvesting game past 350 yards.
Share:
Reddit Pinterest Tumblr WhatsApp Email Share Link

S
Help me spec out my friend's dream rifle
2