Best FFP scope for the buck?

SWFA 3-15x42
plenty of vids out there. But I have used it for deer hunting Out to 359 yards. Lickity Split. Tracks well for vertical and horizontal accuracy. Collects light well so can well into the evening. Reticle options. And for 650$. Its worth every penny ... And some vids out for for long yardage demonstrate its capability out well beyond 500 yards...
good article ...

A Significant Improvement Over Its Predecessor Yes, I’m a little late to the party. My OODA cycle is running a little slow in the area of new gear coming out. Rifle gear is expensive, and I t…
artoftherifle.com 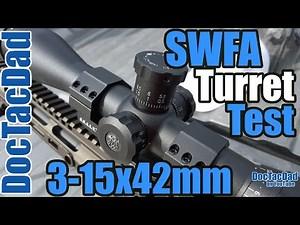 Until recently I’d answer with Vortex Viper... a friend has recently convinced me to try a Burris rt 25. I must say the glass is extremely impressive, so far it has tracked perfectly as well. I also must say I have not had this scope through any kind of a ringer so to speak so the longevity of the functions as of now have yet to be determined. But for the price, 699 I paid for it, I thought I’d give it an honest try and it has been great. Against a Vortex Viper I like the glass on the Burris hands down, the turrets are not as crisp as the Vortex but the turrets on the Burris lock for both windage and elevation so..... between those for a budget scope I would recommend. I had a Leupold Lrp vx3i and I could not get used to the eye relief on it. Glass and turrets were really good on it but tracking was hit or miss, usually 1 click off when returning to zero and pretty repeatedly. Good luck!!!!
Last edited: Feb 18, 2021

Check out Shepherd limited at: shepherdscopes.com for some very reasonably priced ffp rang finding/compensating scopes. I own several of them.
O

I recently purchased a Primary Arms that's been working well on my 224 valkyrie. $480 and free shipping from Primary.

Check out sightron they make a 3-16 ffp that illuminated for stupid money, I paid 279 for it from midway on close out, made in the Philippines but great quality for the money great tactical turrets too.

I Love my Vortex Diamondback. I don't know what your price range is, but Vortex is good glass for the money.

I bought the diamondback years ago before Vortex became well known, i think i got it for $199.99. I took a chance that has turned into me buying 3 other Vortex scopes. I have a Viper 6.5-20X50 SFP on a 7mag, and two Strikefire II's on an AR15 and FM9.

From my understanding Vortex has great customer service. Some of the things I've read about them warrantying things that other companies would've turned down.
P

CO_Guy said:
I'm new to FFP scopes and on a budget so would like to ask your opinions on what has the best quality for the buck. thanks
Click to expand...

Athlon Argos BTR, I have two of them. These are a great scope and not a cheep scope but not the cost of the Vortex or Nightforce
P

I like the Athlon Argos BTR, great bang for the buck
J

I think if you find the features you want, you cannot go wrong with Bushnell, Burris or even Riton. I have a bunch of old and new Burris. Older Signatures, Black Diamond (wonderful) and newer XTR II FFP (great with illuminated reticle but also heavier). Just got a new Fullfield IV but have not mounted it yet. The new Signature line will most likely be very good scopes for the money.

Riton has some great reticles and their glass is quite good for the price. They also have FFP models.
E

Just added a picture, a lot of folks really don’t know about sightron unless you shoot f class and don’t have a ton of money.
A

ed209clark said:
Just added a picture, a lot of folks really don’t know about sightron unless you shoot f class and don’t have a ton of money.
Click to expand...

Have 4 of them great scopes