This is a review of the Athlon Midas BTR 2.5-15x50 riflescope and the Athlon Ares 10x42 binoculars that I used on my recent Alaskan brown bear hunt. If this is in the wrong place or not allowed please move or remove. I am just a nobody, regular Joe hunter and these were my personal experiences with these particular optics. Full disclosure: I contacted Athlon about a discount to help defray costs and they agreed (incredibly, since they had never even spoken to me before) with the request that I share my experiences (good or bad) honestly. Further disclosure: while I have read this site for a few years on and off I never joined until I had reason to (this review) so I have but few posts on this site and little credibility for you to factor into my experiences. I am, however, a pastor; and while that doesn't mean I know squat about optics I hope it gives some measure of credibility to my character and honest opinions.

Athlon Midas BTR 2.5-15x50 - The guide's suggestions were a rifle no smaller than .300 WinMag and a low powered scope with an illuminated reticle, he uses a Leopold vx6 in 1-6x. After discussing with the Athlon rep I settled on the Midas due to the HD glass and the wider range of magnification that would suit me better in the long run. Truthfully I probably spent much more time behind the scope while zeroing and practicing than I did while actually hunting as it happened pretty fast. I already had a Midas in the 4.5-27x so I knew what to expect from the glass (very good) but was interested/concerned with how it would take the pounding and weather of a spring hunt in SE Alaska. It had to survive: 3 flights and 4 ground crews, 9 days of bouncing, bumping, and vibration in the skiff for 4-7 hrs a day, 6 straight days of rain, several saltwater baths from waves followed by freshwater baths when we got back to the big boat, temperature swings from 40* while hunting to 70* in the boat. The Midas shrugged all of that off and when the time came to pull the trigger I had no fog in the lenses, the reticle was clear, and the illumination worked perfectly for a good aiming point on the dark hide of the bear. In short, I can't speak to the repeatability of the turrets or the ability to see long range mosquitoes with this particular scope on this particular hunt, it wasn't that kind of hunt. What I can say is that it took the pounding and the weather and hit where it was supposed to when I told it to with a totally clear field of vision. What more could I ask?

Athlon Ares 10x42 - I spent almost 7 hrs/day for 9 days behind these binos. I compared them to the guides binos and we traded back and forth so I could get their opinions as well. The short version is they performed very, very well. For comparison the other binos were a Leica Geovid HDR 10x42, Nikon Laserforce 10x42, and Fujinon FMTR-SX 7x50. There were also a Canon and Zeiss but they were both 15x or 20x60 and image stabilized so not really a comparison. The Ares are advertised as having ED glass and it compared very favorably to the glass in the Nikon and Leica binos. In fact, in extreme low light while passing them back and forth the guide said he thought the Ares were a little brighter than the Leica binos, I agreed. We both thought the clarity was pretty much equal. In my opinion the Nikon glass was a little behind both the Leica and the Ares. The Fujinon might have had a slight advantage in light gathering but with a 7x50 that was to be expected. The image was clear, the weight is right, the focus worked great, and the eyecups never felt like they were going to snap off if you twisted too hard with gloves on. Now for the criticism. The weather was terrible and a real test of a binos ability to perform. At 40* and raining with a hood on and breathing steam, everyone's binos were fogging to some extent and the Ares were no exception. What bugged me was that the left eye fogged 200% more than the right eye. Which tells me that there is something goofy going on there. I'd say that the resistance to fogging of the left eye was pretty good not great, but the right eye was fantastic. So if they are both supposed to be like the right eye then fabulous and I just got a little bit of a lemon. I am sending them back and will report what I hear from Athlon. I also wish that the eyecups were just a hair longer for my face. I had to either just barely graze my eyebrow ridge or even hold just off my face to get a good sight picture. I fiddled with it and got it where it was fine eventually, but the Leica was so much easier to just pull up and immediately see full view. I got it figured out where it was comfortable, but it wasn't as easy as the Leica. This will not effect everyone the same as everybody's face is different. That's my only beef with these binos after about 60 straight hours of looking through them. All in all, I'd totally recommend them, especially for someone on a budget. I hope this helps someone in the future who's looking at Athlon products, my experience with them has been nothing but top notch, they are good, regular people. As always, YMMV. 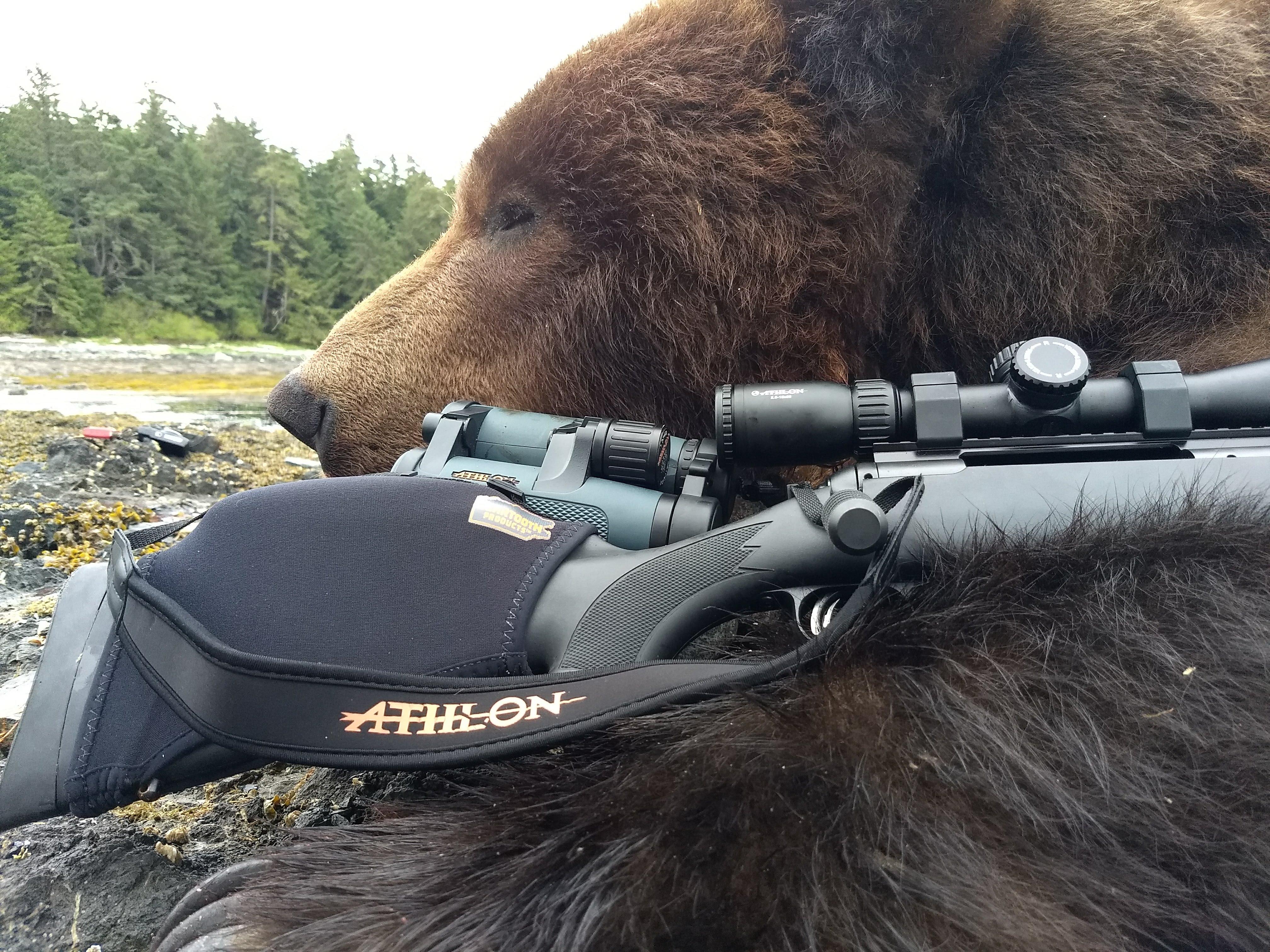 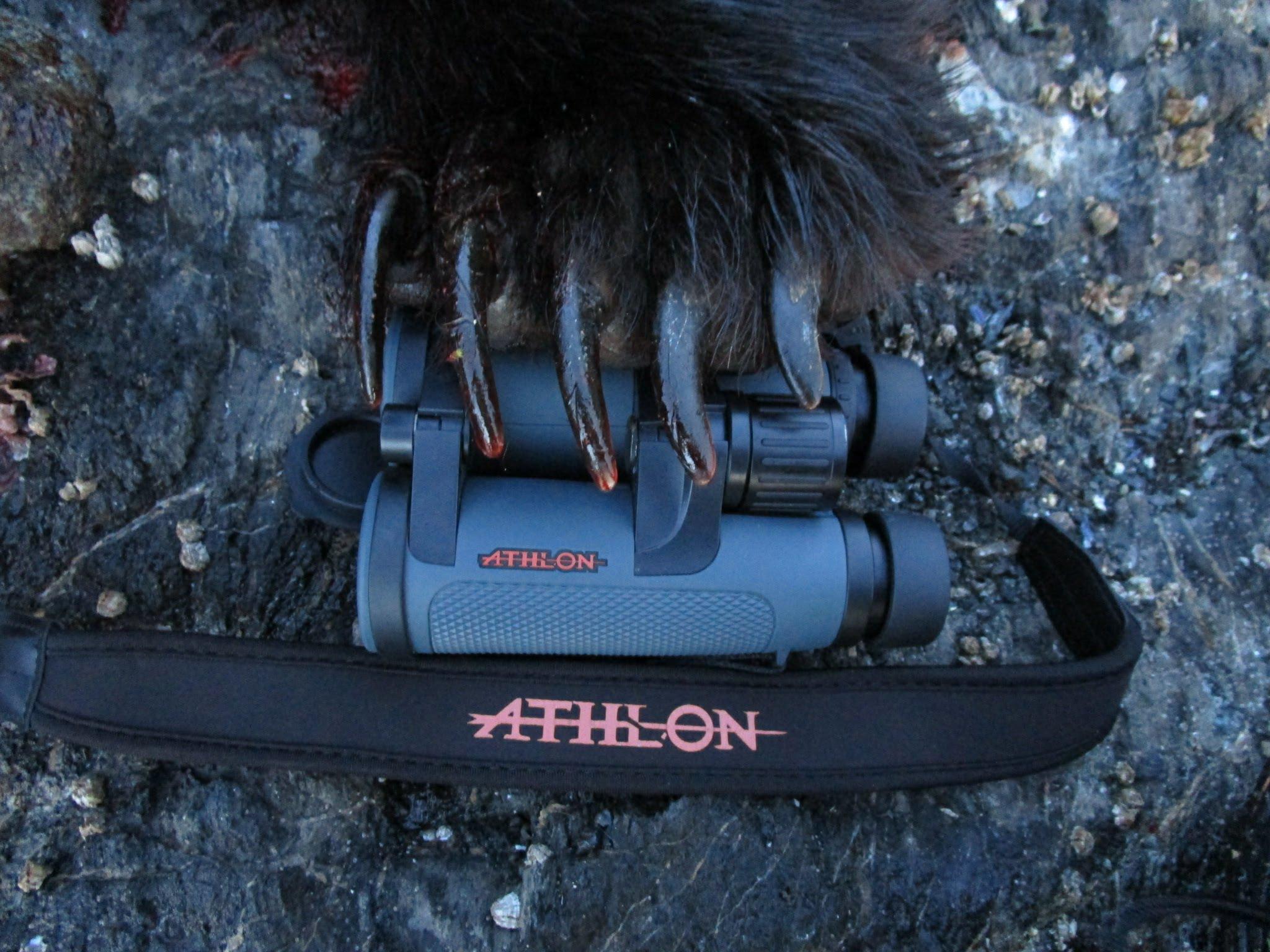 Thank you for your review, I have to be very honest;I really am interested in the Athlon line of scopes and Tract scopes thank you for the review on the reliability could you speak on the qaulity of the optics on the scope?

Good review, thanks for sharing. I have been looking into there optics as well. Athlon with likely be my next scope purchase. From everything I’ve read the quality for the money is hard to beat.
P

Newbweatherby said:
Thank you for your review, I have to be very honest;I really am interested in the Athlon line of scopes and Tract scopes thank you for the review on the reliability could you speak on the qaulity of the optics on the scope?
Click to expand...

As with most of the optics world, I think that depends on which tier of scope you're used to using and what you're interested in. The Midas glass is second only to the Cronus glass in the Athlon line. It's advertised as HD glass fully multicoated blah blah blah. It's the best scope I own personally but I don't have any of the really top end stuff. My son has the Talos BTR in 4-14x and it's waaaay better than the Vortex Crossfire 2 I had for a while. The Midas is 2 steps above that. Most people compare to a Viper PST gen 2 or better. Midas is 2nd focal plane, Ares line of scopes is 1st focal plane but same glass. I don't target shoot so all I can say is I can shoot coyotes much later than I've ever been able to before and when messing around with my sons at 550 yards a milk jug is very easy to see and very clear. (yes I hit it too,lol) Everyone's eyes are different, mine say the Midas is very good, especially for the price.

I'm hoping the Helos will go on sale for Memorial Day. Good write ups.
B

Thanks for the review as I am interested in the Midas HMR.
P

bosstom said:
Thanks for the review as I am interested in the Midas HMR.
Click to expand...

Me too. I have one on order but not sure when they will be out. Should be everything the BTR is but with capped turrets.
B

PastorHunter said:
Me too. I have one on order but not sure when they will be out. Should be everything the BTR is but with capped turrets.
Click to expand...

I was told it should be sometime in June for the BDC 600.

Hey, Pastor, appreciate the review. I'm considering an Athlon product too - probably a Midas scope. I have several Nightforce scopes already but would like something in a higher magnification, e.g., Athlon Midas 4.5x27.
I get, to a degree, you get what you pay for, but there's also a point of diminishing returns where cost exceeds value. If I were a hardcore long distance shooter, I would pony up the dough for a higher end scope. But, as a recreational shooter who may only shoot 500+ yards 6 times, or so, a year it's hard to justify. A sub $500 dollar, 27x scope may just be the ticket.
P

skeen said:
Hey, Pastor, appreciate the review. I'm considering an Athlon product too - probably a Midas scope. I have several Nightforce scopes already but would like something in a higher magnification, e.g., Athlon Midas 4.5x27.
I get, to a degree, you get what you pay for, but there's also a point of diminishing returns where cost exceeds value. If I were a hardcore long distance shooter, I would pony up the dough for a higher end scope. But, as a recreational shooter who may only shoot 500+ yards 6 times, or so, a year it's hard to justify. A sub $500 dollar, 27x scope may just be the ticket.
Click to expand...

I have a Midas 4.5-27 and really like it. If you are using reticle holds it's accurate at 15x. Personally I find my sweet spot on that scope to be around 20x when I'm trying to stretch it out. That's just where I tend to land. I think that above that the eyebox gets finiky for me but ymmv. I don't have any Nightforce to compare to so maybe that's just what happens when you go that high. To be clear, on 27x the scope is still crystal clear and details are great, but your position has to be solid. I think that is kinda universal at higher power. 20x just gives me a little more wiggle.
A

I shoot 2 Cronus scopes on different rifles and they have performed flawlessly. Amazing glass for the money and seem to be pretty durable.

You know what, Pastor? I just ordered up a Athlon Midas BTR 4.5-27x50 from Doug at Cameraland. It may, or may not, compare to some of my higher end scopes, but for less than $400 bucks it's worth giving it a shot.

Aside from all the positive reviews I read, they are headquartered in Olathe, KS - about 5 miles away from me. So if any service issues were to crop up, I'd hope to get them quickly handled. I may just cruise up there one day for the heck of it.
P

I'd sure be interested in what you think of it when you get it mounted. Always good to hear other opinions from guys with higher end stuff.
N