Both are built on a trued Remington 700 Short actions with 3-B (BAINEY) Extended Magazine Box & Followers. The inside length of these magazines is 3.110" and the bottom of the rifle and ejection port on both are opened up to allow for the larger Magazine box and proper ejection. This allows a longer throat/COAL from custom reamers. Both barrels are Hart #3's at finished at 25" with T1 Terminator muzzle brakes. Both have McMillian Remington Hunter stocks.

Thoughts on keeping both, just one or the other, or changing one to another caliber? I have 270 and 308 barrels I could change to.

Why NOT keep both??? That is crazy talk.

I currently have three 6.5SSs, and a 7SS is coming this week. Along with several other 6.5s and 7mms!

Both are built on a trued Remington 700 Short actions with 3-B (BAINEY) Extended Magazine Box & Followers. The inside length of these magazines is 3.110" and the bottom of the rifle and ejection port on both are opened up to allow for the larger Magazine box and proper ejection. This allows a longer throat/COAL from custom reamers. Both barrels are Hart #3's at finished at 25" with T1 Terminator muzzle brakes. Both have McMillian Remington Hunter stocks.

Thoughts on keeping both, just one or the other, or changing one to another caliber? I have 270 and 308 barrels I could change to.
Click to expand...

This boils down to personal preference.

I would be content with the 7WSM myself. It's a good cartridge.
IMO the WSM case is excess for 26cal, shortening accurate barrel life for little overall gain.
May just be me. I don't see bigger as 'better'. I'm sure there is a 'best' capacity for every bullet weight in cal.
L

I would Keep both, that way you have a quality back up. I would build a load with 140 EH or a 140 ish grain of your choice for the 6.5. It would be a heck of a combo. Ballistically they will be close but both will be excellent cartiridges. My current 2 top hunting rifles that I use are 280AI and 7WSM both close ballistics but always got to have a back up that you don’t loose anything with. I’ve broke 2 guns over the years on hunts so I always travel with an extra when feasible
L

I’ll take a slightly different approach. If you plan on shooting eldx bullets in my experience they tend do not do so well at those high speeds. I switched to 175s to slow them down (from 162s going 3200).

That said I feel the 143 class out of a 6.5 will be way too fast at closer in ranges leading to more “effectiveness” out of the 7wsm with heavier bullets.

Obviously you can shoot other bullets that are less sleek but built a bit stronger. 7mm is a really good sweat spot though.
J

I say keep both. I have 3 7mmWSMs and one 6.5/300. All are fun to shoot and have a great bullet selection. One thing I have found is that on the 6.5, I shoot a 140 berger vld at 3150. That just seems to be the velocity that cartridge/bullet combo seems to like, and its easy on the barrel. Shooting my last 6.5 with the same bullet, I ran it to just under 1000 rounds before the accuracy started to suffer.

I'll cover my experience breaking in the barrel on the 6.5/300 WSM later in the thread. It was not good.

Neck, and Lead dimensions as well as forcing cone angle are shown here. 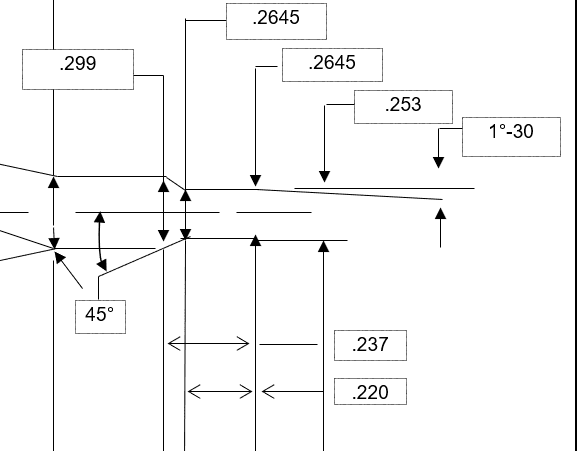 The dimension for the throat is 2.569" from the case base.

By the way, I often get mixed up on the proper terms and perhaps you all can help. I have used Freebore (FB) and throat interchangeably to specify the distance from the case to the point in the chamber, after the case, where it begins to taper. I now know it is wrong. In this drawing I would have said the 0.220" dimension was the freeboard, or is it the 0.237' dimension? Help me use the proper terms for each of these two dimensions (0.220 vs 0.237).
L

I would like to see a complete view of the print. .237 is not the freebore.
Its obviously a PTG print.
The best I can explain it is the number thats between the 2 - 264.5s that towards the bottom it doesn't show what you posted is your freebore.
If you can find a JGS print on theres its there U and V number it might make more sense if I dont.
You should be about .180 freebore for the 140 class bullets
Last edited: Nov 3, 2021

The reason I went with the 25" barrel is I thought it was a good compromise for a lighter gun that might be used on a Big Horn Sheep or Mountain Goat hunt. ( I have 19 & 16 points respectively in CO) but still give decent velocity. My 28 Nosler rifles have 26" barrels with 2 inch Muzzle brakes. The 6.5 WSM also has a muzzle brake but it is only about 1.5" I thought I would shorten the barrel a little with this rifle thinking it would use up all the powder in the 25" with the smaller case. This seems to work with the 7MM WSM and RL26 which is the powder I planned on using with this rifle.

There is more to consider with big overbores than simple MV.
3,200 ft/sec was mentioned with 140s from the WSM case. I can get the same from a WSSM case, using way less powder.
The difference is pressure of course.

Pressure creates force as pounds per square inch (PSI). So with a given pressure, the forces exhibited with a WSM case area are a lot higher than those from a WSSM case area. That's why I can run higher viable pressures with the 6.5WSSM.
And choosing a high pressure load -vs- low pressure load is easy for me. I choose higher, for advantages of it -with a good plan.
That's my basis for a notion that bigger is not better.

For an extreme analogy of this, consider the tiny little 6PPC for point blank BR competition. It's an underbore.
Why doesn't anybody compete against it using an overbore cartridge?
Well, they could try, and they'll lose for sure.
A competitive 6PPC load runs up around 75Kpsi. This is viable (somewhat) because the case area is so small.
It's competitive because pressures that high are deep into diminished returns, which results in diminished variance of returns.
A 243Win can match same & higher MV easier -while shooting like a dog compared to a 6PPC.

Since I see accuracy as the most powerful of all ballistic attributes, I am not out for biggest velocity numbers.
I prefer more disciplined, logical, designs.
I know somebody out there is shooting 1/4moa regular with giant overbores, but I could never rely on the luck it takes to find that.
Share:
Reddit Pinterest Tumblr WhatsApp Email Share Link