Not a long range shot by many standards but for my backpack rifle (30-06) the 300 yard shot had it maxed out on a bull this size.
Spotted this bull and five cows half mile or so below me just before dark and watched them move into the timber as they worked around the end of the ridge.
Knowing the country very well I always avoid this canyon until the last two or three days before the season closes because it’s just plain nasty but if you still have a tag in your pocket you will find elk there.
I knew pretty well where the elk were headed so the next morning as soon as I could see I headed down the ridge that would be to the west of where I thought the elk would be. On top of the ridge the wind was blowing hard and it was raining lightly on and off. I had not gone down quarter mile when I spotted some elk across the canyon. Glassed for about fifteen minutes and they were all cows seven that I could see. Not seeing a bull and knowing he was there somewhere I concluded he was probably deeper in the canyon at the elevation where I had seen them the night before and out of the wind. I did the sneak thing down the ridge another five hundred yards being careful not to skyline and trying to keep something between me and the elk above as to not spook them. Below me across the canyon I spot more elk feeding in the timber. I moved to a place under a red fir out of the wind and started glassing. All I could see was cows a bunch of them. I kept looking but no bull. I caught some movement below the main bunch of cows and another cow fed into a small opening in the timber. I could see another elk behind her but could not see its head. The front cow moved forward followed by the next elk and I still could not make out what it was. Then the second elk moved up the hill about ten feet and turned its head and I then could see the horns. And as luck would have it the bull turned broadside to me.
I have been shooting this gun (second barrel third stock) for forty + years. It’s a pre 64 Model 70 30-06 with a Douglas barrel and a Pacific Research stock and weighs 8.5lbs loaded. The rifle is a tack driver with reloads and shoots the Rem 165gr Core-Lockt almost as good. It’s sighted in 3 inches high at a hundred yards (on @ 250). The scope is a Leupold 3.5-10 with M1 turrets.
I knew I did not have much time as the bull was in a small opening and with a couple steps would be gone. I cranked the scope to 10 power scooted around to get my knees up so I could put my elbows into them. I guessed the range right around three hundred yards laid the cross hair right on top of his back pulled down a couple inches (just cause) just off the shoulder and fired. I saw him lift his head as he took a step backward and I knew I had hit him. I jacked another shell in and laid the cross hair in the same place and fired again. This time he lunged forward and was gone from sight. I had jacked another shell in and was looking through the scope for what seemed like a long time even though it was just seconds. Then I saw him come cart wheeling back down the hill where he had been standing and piled up down the hill in the brush out of my sight. Did I mention that this is a really steep nasty canyon!
As you can see by the pictures he is just a mature 6 point wild Idaho bull but he sure made my day. This is how I found him 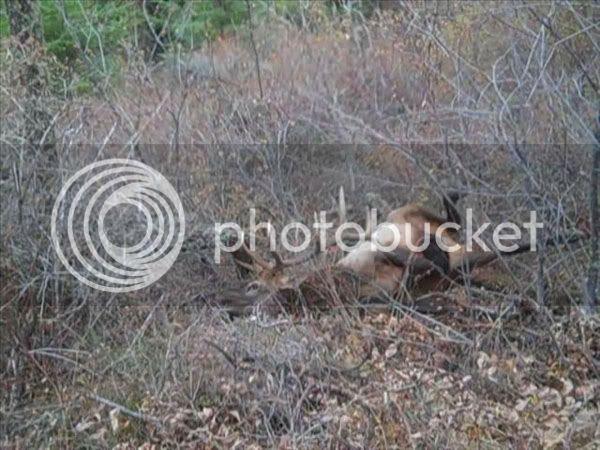 A little better look at the horns. 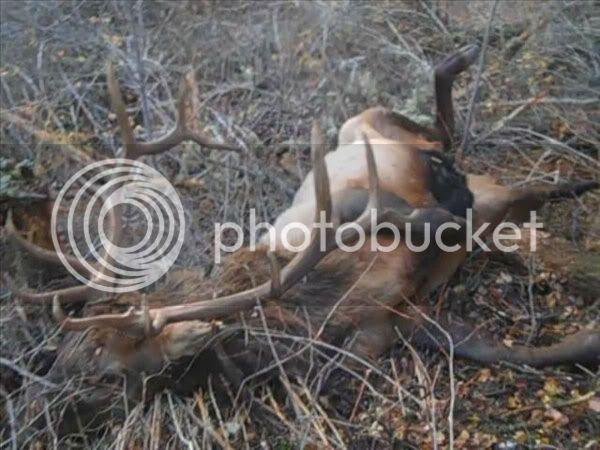 Had him quartered laying on a log to cool till tomorrow. Packin out the heart liver and horns. 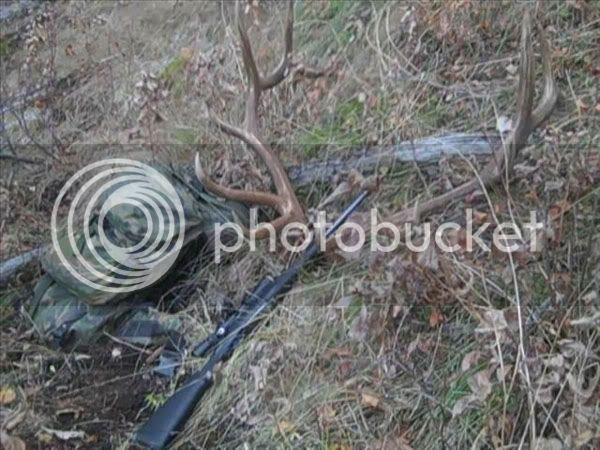 Nice bull. That makes me want to quit my job and move out west!!!
S

Congratulations on a great bull. Hope you had lots of help getting him out of there.
S

Congrats on a great bull!
K

Nice bull, it sure does pay to know the country you are hunting.

I do not know many people that would pass on a bull like that. Crongats!
H

Your patience and knowledge of the terrain payed off. Congratulations on that beautiful buck, I enjoyed reading your story, and enjoyed the pictures. Thanks for posting.

Very nice bull... and the reason I miss living in and hunting Idaho.
436

Thanks for the responses you guys. Hope all of you had as much fun and success as I this last season. All ready thinking about next season and using the new rifle that I am gathering parts for. McMillan shipped the stock the first of the week so should have it soon. I know a couple other canyons here that are always full of elk but just out of range for the 06 but should be easy picking for the 300 WM. Can’t wait.
T