Miss : high to the left?

Settled in on a load with the 150 ETips in my 7mm Rem Mag. Shot some 5 round groups of the two most promising loads. The "red" group here has repeatedly shown the same tight clustering of shots with fliers high and to the left. Other loads have been more generally dispersed in no real pattern. More than once though this load has clustered shots down to the right.

Could I be very consistently "pulling" the trigger/grip and my tight clusters are actually fliers down and to the right?

At 300 yards the overall group measured 1.35 MOA with the three clustered right at 1" or 1/3 MOA. It's odd to me that I consiistently get that type of grouping with this load and not the others. I would think if it was a problem with my hold it would show up in all loads. 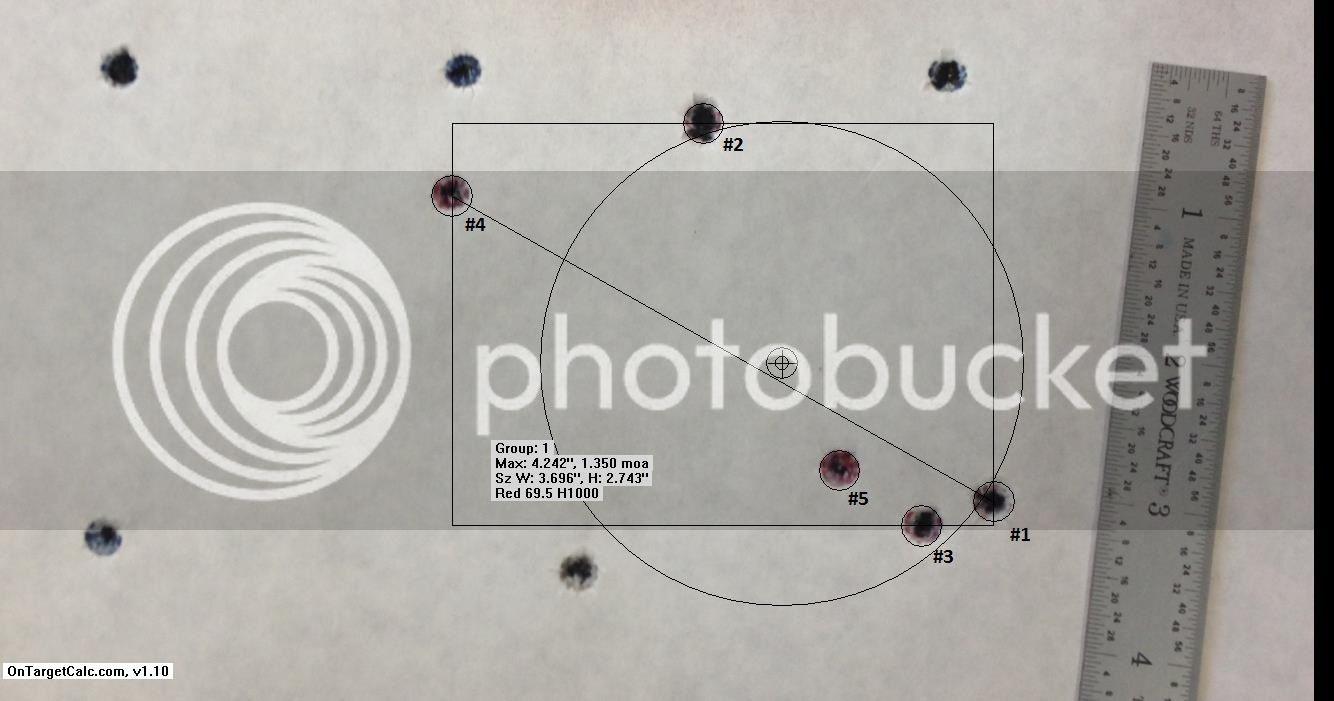 Sort of. I round robined them with the other load. So the sequence was:

So the two high shots were both following shots of the other load. Same bullet,powder, etc. but the blue load had one more grain powder and 40-50fps faster. I had thought of that but can't see why it would lead to the fliers. Slightly warmer barrel? Tiny bit more fouling? Me flinching from slight recoil increase?

The real telling thing though is that the load showed this before without firing round robin. A five shot group where first two were nearly touching at 300 yards. I can't recall the shot order for the next 3 just that I should have quit after the first 2

On the target above I did wait a minimum of 3 minutes between shots to allow the barrel to cool but perhaps it was slightly warmer after the higher velocity rounds. The previous target it was in fact the first two for sure that grouped tightly and perhaps I have a bedding/temperature issue. As I said it is a stock Remington magnum contour. Not a bull barrel by any means. When I bedded it I also did the first 5" of the barrel channel. Perhaps I should free float it all the way to the lug?

I think 2 and 4 are the fliers. They are up and left cause thats the direction the rifle moves when fired. Since it is a light rifle with some kick ( 7 MaG - Magnum contour) I think the rifle is jumping on you. I would try holding the forearm of the stock when you shoot the way you would on a traditional light rifle. Not a death grip, just hold with slight down pressure on the bag and pull the rifle back into your shoulder a bit with the forearm. That is what I do with my light rifles and it shrinks my groups and cuts down on fliers.. I only rest my left hand on the rear bag on heavy rifles.
D

Thanks. I'll try that.

FearNoWind said:
Is the 1,2,3,4,5 rythm in the shots the actual sequence you fired them in?
Click to expand...

The reason I asked about the shot sequence is that rear bag position and alignment can have a huge affect on vertical; especially vertical that runs slightly left as yours appear to be doing. Lighter rifles tend to be more dramatically affected as was previously mentioned. Can't say for sure, of course, but I'd try that load with a front rest (even if it's only sand bags) along a shorter span of the fore stock and a consistent shoulder/rear bag technique before I tried anything else. The reason I'd look for an alternative rest or (ugh) sand bags, is that IMO the Caldwell TackDriver bag allows for too much lateral influence on the stock. Unless the rifle is perfectly aligned with the slot in the bag there's a good change you could be creating interference in recoil - not unlike a poorly aligned butt bag. If you elect to put a firm grip on the fore stock be very careful to be consistent with the downward pressure and to avoid inducing lateral influences on the stock. That'll just exacerbate your problem.
You must log in or register to reply here.
Share:
Reddit Pinterest Tumblr WhatsApp Email Link