Okay guys im new to this site so take it easy
on me.
I would like to here all the bad and good and
everything else about horus vision.
I got one last month and so far it has turned out to be pretty good, the reticle is busy but i can hit targets out to 1000yds with ease.
I have it on a CZ 550 in 308cal.
I have heard alot of pros and cons,and bad mouthing about this scope so lets here it guys, pour it on...
G

I had one on my Savage 10FP for a while and loved it. The range where I shoot holds a lot of sniper matches. The majority of the scopes on the high dollar rifles there are HORUS's. Now just wishing I hadnt sold mine due to lack of funds.

Saw a few at last summers tac match here in north Tx. It rained and every one brand labeled by Horus was fogged and had water inside.

The reticle may, and does work quite well for those who take the time to learn it just like any other tool, but the Horus scope is pretty much a non-starter.
G

JWB, stick with Leupold or Nightforce.
The nightforce NP-R2 reticle is awesome.

With Horus you pay for a good reticle on a cheap scope.
J

John m. I have a friend who had a nightforce
and the scope would not hold zero,we thought
it might be the rifle so he put it on another
and it still would not hold zero.
thats the only nightforce scope i have ever been around so it kind of scared me away, maybe it was just a bad one.
I do agree with you on the leupold,i have two of them with recticles set up by premire
recticle out of virginia. good stuff.

By the way hoodcountry i had that horus out in the rain last weekend and it did not fog
or get water inside, but i will keep on testing it and keep you informed, im going deer hunting this weekend, and it is suppose to rain all weekend, it will get a good test.
B

If you read my March of 2001 article on the NXS Scopes, you already know how much I liked these scopes and how well they performed. I have even more respect for them more today than ever before, simply because the original scopes are still ticking and now several design changes have been made to improve these scopes for field use from a tactical standpoint. (For the average police department the 3.5-15x50 or 56mms are probably as good as you can get as is). The two changes I like from a sniper's viewpoint are, the "MLR Reticle" and the "Zero Stop" feature. These have turned an excellent scope into an even better tactical scope.


Before I start discussing the two new features, lets review the scopes themselves:

1 The goals of the Nightforce NXS series were to be; Designed for the rough and tumble field conditions they would be used under. The hard hitting calibers that are becoming more popular and to be as good if not better, optically as well as mechanically than any other scope out there no matter the cost. Big shoes to fill, but after years of testing I think they have it pretty well figured out. I have used no better tactical scope including those costing a lot more money which have failed, where as NXS has come through unscathed.

2. The scope tested here was the 3.5-15x50. This scope, in my opinion, offers the best features available for medium and long range sniping, of any of the NXS line of scopes. Many prefer the higher magnification of the 22x, but I like the wider field of view of the 15x, the lower magnification offers a long of advantages most notably when dealing with issues such as the mirage effect encountered when using the higher power scopes.

3. Durability of the NXS is second to none in the scope industry. The track record of my NXS scopes are similar to the ones fielded by many others. Zero failures or returns. Heck when I called to order this scope the owner of Nightforce had to be reminded of my earlier tests as I had not talked with him in years. There was no need, my Nightforce scopes had never failed. I can't say that about every company I have tested for. The percentage of failures among some of the other scopes I have worked with were so high I had their numbers on my speed dial.

"Developed for military small arms, the 3.5-15x50 NXS allows for lower mounting on the weapon and reduced signature from a forward observer. Practical magnification and the large field of view make it a real asset to the serious hunter as well. This NXS offers the shooter an unprecedented 110 M.O.A. of internal adjustment, making it—like its companion model 3.5-15x56 NXS—a versatile riflescope for advanced field applications. The 3.5-15x50 NXS variable magnification offers the shooter tremendous flexibility in the field, maintaining exceptional optical integrity. Like every NXS, this scope has been tested in the most extreme conditions for unfailing, repeatable performance."

Objective and Ocular Lens diameters of 50 and 36 mms of some of if not the best glass of any scope I have tested to date.

First thing tested was the new "MLR" reticle. It is a modification of their earlier Mildot design and a logical evolution in reticles necessary for tactical uses. A diagram of the reticle is included for review. This reticle uses hash marks for accurate ranging and holdovers instead of the dots used in most mil scale reticles. It starts as a typical crosshair design with ten mils of space in center of thin hairs, ( .037 mil thick) then has five mils on each end of the thicker .50 mil wide lines. The thinner cross hairs have 1 mil markings .25 mil long, and half mil markings .125 mil long. There are also either .25 mil spacing on the right and top ends of the thinner center section, that are also .125 mil long. What all this does is allow you to mil down to 1/10 of a mil quickly and accurately, for hold-offs and ranging. In practice it worked very well. The lines are small enough to allow very accurate ranging and hold-offs, but large enough to not be a problem in low light. A very nice balance of just the right size. The reticle is what is referred to as a "Rear Focal Plane Reticle". In short this means the reticle always appears the same size no matter what the power setting is on the scope. It also means the Mil Spacing are only correct at the maximum power setting of 15x. This is the common American approach to rifle scopes. The other type of reticle is a "Front focal plane" and this is the one where the reticle appears to get bigger as the power is turned up. Both have advantages and disadvantages that can actually cancel each other out. In short it usually comes down to the shooter's personal preference.

"Developed for military use on NXS models, this feature allows the shooter to set a zero at any distance. When returning back to the zero, the elevation dial will stop and read zero. This can be done in total darkness, underwater, or in any stressful situation without the need for visual confirmation. This feature eliminate the possibility of the shooter losing count of what rotation the zero is set on."

The next feature is my favorite. Its the "Zero Stop" feature. If you ever used a .25moa click scope, chances are you had several revolutions of the elevation turret before you had the weapon zeroed. That meant you had to remember how many lines were showing and count up or down from there. Under low stress conditions most shooters do well with design. Under added stress or in low light situations it all goes away and doesn't work so well for the shooter. You lose track and end up shooting a full revolution or more over or under the target. Years ago while competing in a Sniper Match when a long time Special Force Instructor Friend of mine said "Mike you still using that multiple turn scope? It will eventually get you. One almost cost me my life when I was off a turn" Well It had never happened to me before, but later that week I ended up missing 4, four hundred yard targets in row because I was off one complete revolution and did not see impact, hearing only the "Miss" called. That only cost me to drop from first to third, but the message was clear, It can become a problem under stress. Thats one of the reasons I have been a big fan of the single turn of the elevation knob to get out to 1000 yards. You lose your fine adjustments found in a 1/4MOA scope, but you get so much more in exchange.


The single turn scope was virtually the only system I used for long range field sniping for years, until now. With the NXS Zero Stop feature, you can zero at any range and set the stop so that is my bottom end zero. Everything is then turned from that point. You can set the Zero Stop at any distance. It does not care if its zeroed at 100 or 500 yards. Be advised the stop does not allow you to turn below the zero so if you select a long range zero you will have to use a hold under for closer targets. It depends on the weapon system but with a 308 I zero 1 moa low at 200 yards, under S.A.C./Standard Atmospheric Conditions (59 degrees at Sea Level). This allows me the ability to come down to compensate for higher air temps or higher elevations. I just know that under SAC my zero is actually 1 moa up from the Zero Stop position. You can do what works best for you but this seems to be something I can repeat so I will stick with it until something better comes along.


On setting up the Zero Stop, you remove the turret cap and loosen the three set screws. Shoot the weapon, adjust the scope to where you want it. Push the Zero Stop top to bottom and tighten the set screws. You're all set from there.


After just a few months of testing this scope, but with four years of testing the NXS Series, I am very impressed with the quality and field worthy abilities of this scopes. This scope will sit on my Tactical Intervention Signature Series Rifle for a long time to come. The NXS has become one of my "go to" scopes for just about any situation I could find myself.

If u want to know more about the Horus sytem get ahold of Ward Brien-- the designer of the ACI-- i can't remember his e-mail-- somebody here probably does tho.
G

JWB, I'm sure you will hear +'s and -'s with every scope. My point is simply The Horus scope is not worth high $$$ just because of the reticle.

Now I know they used to make the reticle in the Schmidt & Bender scopes. I don't know if they still do, but I you really love the reticle then look into those.

Dont spent good $$$ of a cheap scope with a good reticle.
D 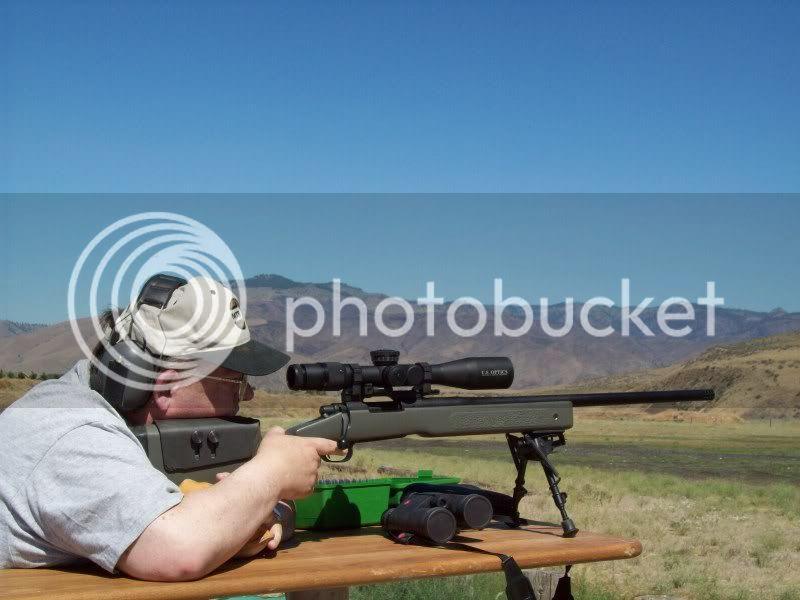