Do you consider Sectional Density when choosing a bullet?

I mildly consider sectional density if considering a headshot or heavy bone shot. But really with today's fragmenting bullets it's not something I look heavily into. I generally wait for a good side profile shot if I can. Now if it's dangerous game that's a different story if I were focusing on monos, hardcast, or fmj. As far as the military switching from 9mm/38 special, as in the case in the Philipines to 45 ACP, that was FMJ and the 45 ACP made a bigger hole. Apparently that stopped the Moro's mo betta. With a good quality hollowpoint gel tests don't show much difference between the 9mm and 45 ACP. But if shooting a FMJ I'd choose a 45 ACP.
Last edited: Aug 11, 2021
2

No, I may look at sectional density in passing, as it is written in every loading manual I have, but it does not influence my decision. Construction, BC and the GAME influence my choice.
I am a fan of bonded sleek bullets, tried Scirocco’s, they are softer than Accubond and perform well, Accubonds, ABLR, Berger Elites (if they will ever be available here again) Speer Hot Cor and Grand Slam or even Woodleigh are what I look for.
Have used Sierra and Hornady, but these were lacking for me, just not the performance I am used to.
I really like Ballistic Tip Varmint bullets in my 22’s and 25’s, they are stupid accurate too.

Not being a smart Aleve but have you tried a stuck case remover to get that popcorn shell out of your teeth?
My last dentist appointment caught us in a conversation about the pandemic closed movie theater. He mentioned how it cost him and his wife $40 just to get their seat. I told him it costs me $1200 every time we go! My wife breaks a tooth previously filled and I end up paying for a new crown!
H

From the ballistic experts at Berger:
"The problem with BC’s is that they combine the effects of mass and drag into one number. So if a bullet has a high BC, you don’t know if it’s a medium weight bullet with very low drag, or a heavy bullet with high drag. The reason this is important is because if a bullet has a high BC just because it’s heavy, it will suffer from having a depressed muzzle velocity, and performance will not be as good as the high BC implies." - quote from Berger 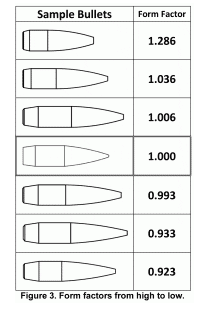 BC=SD/FF, BC = ballistic coefficient, weight included in SD. Many zippy & pointy light bullets having modest BC values are good long range performers. Shooters get hung up on BC values thinking that they are the only measure of a bullet's capability to overcome drag.

The extended Berger table shows green, yellow & red boxes. Are your bullets in the green boxes? Would any long range shooter seeking optimum bullet performance neglect SD as a factor in reducing drag? SD has additional importance than evaluating the effect of a bullet hitting meat & bone. The folks at Berger did apologize for the math used to describe this stuff,

The Hornady 4DOF ballistic calculator does not use G7 BC values, apparently Doppler radar tracks bullet velocity and individual drop & wind values may be extrapolated from these Doppler radar data. No G7 drag models. Various other APs don't include SD values and rely on provided BC values. Bullet shape remains constant (except for those melting meplats).

This is the other thing bandied about so often, BC is not constant.
BC is only valid in a velocity window at a certain air density, change elevation and BC changes.
SD tells us that a .338” 250g bullet has a higher SD than a .375” 300g bullet.
According to SD theory, the longer .338” bullet should out penetrate the .375” bullet…..but does it if we use a solid brass/guilting metal bullet against a cup and core bullet? This is why I take no heed in SD numbers.

Old rooster said:
Is sectional Density a true way to tell in advance if a bullet will perform well?

I give SD a glance but go more by weight verses caliber. Gotta love it when, in your mind you have come up with the perfect match of weight, SD, BC, case brand, powder, primer, and your weapon wants nothing to do with it.
H

Are BC values inconsistent and vary with velocity and air density?

The SD, weight & diameter and the FF or shape of the bullet, remain constant or independent or is fixed during the bullet's flight making BC a constant value - unless the bullet blows up.

Drag (force) is variable caused by differences in air density and drag introduced by unstable bullets like inadequate twist rate.

Some ballistic programs and APs play around with BC and/or initial velocities to make calculations fit the actual trajectory.

I like the Hornady 4DOF ballistic calculator because it does not use BC, SD, or FF values to calculate performance - Doppler radar data.

SD is good to look at.
O

Hugnot you sure come up with some good stuff brother.
I had never heard of Form Factor before but now I have and thanks for your knowledge.
I have Strelock app but will look into 4DOF ballistic calculator

AT what distance does SD truly become relevant?

Muddyboots said:
AT what distance does SD truly become relevant?

Eh not so much, but I do pay attention to the BC. You can’t have a good BC without a good SD

3 elements that make up your BC

you’ll notice that when you look at the G7 BC for your projectile, it’s VERY close if not the same as the advertised SD

Your sectional density is the G7 BC minus the Form Factor (Drag coefficients). You can’t have a good BC without having a good SD.
Last edited: Aug 29, 2021
R

Yes.....within reason. I look for a bullet that has a relatively high BC....which is kind of an aerodynamic- high sectional density bullet. I also use monos, which, while they may lose some sectional density due to expansion ....they lose little to no sectional density (for lack of better description) due to bullet weight loss! The retained mass equates to better momentum and better penetration.....essentially SD.

I realize that most do not think of monos and sectional density in the same sentence.....but higher mass retention after impact, somewhat relates to having a higher sectional density! memtb
Share:
Reddit Pinterest Tumblr WhatsApp Email Share Link

How to choose a bullet….data based decision…
2

Anealing--when do you do it?

L
When do you anneal?