last night me and buddy decided to share a blind chat and see what came into the field. Hog came in about 4. I had my little TC encore with a 6.5 Grendel barrel on it. One shot to the head--dead boar...We had some axis come in--about 10 min before dark had an old buck with about 7 in spikes came in..he was dark old and heavy bodied. I ask Jeff if he wanted to kill him for meat...he said he had enough game meat to last him 2 years--but could use some dried sausage--I told him I was down for that so the Grendel came back up..put the crosshairs on him 145 yards 130 berger...wack...dropped him...watched him flop for about 2 min...got down got the buggy and drove over to him...2 spots of blood, and no deer...****....we looked for 2 hours...no deer--going to look now. Have not lost a deer in a long time--just hate it.
Last edited: Nov 16, 2018

Bummer! I hope you find him. If/when you do, please report back with what happened.
C

My wife shot a hog and then a spike buck with the Berger 130 OTM...lost both of them.

The buzzards found the spike. I was able to peal back the hide and found the bullet...massive wound channel, but nothing more than white foam out of the nose and mouth! The shot was perfect...crease behind the shoulder was where the exit should have been. Bullet didn't even make it to the hide! It was still in the shoulder!

Well no deer--blood dog, and a search party turned nothing up. I have always shot the 123 SST and been somewhat happy. I was a big Swift, Barnes X, and trophy bonded guy 15-20 years ago--really changed the way bullet weight and calibers you used. I started shooting long range about 10 years ago--and changed a lot of equipment I used--bullets too (mostly went to Berger, Serria GC, etc) . I had never lost anything up until this point--but looked at some of the bullet performance, and was really underwhelmed. I have said for sometime that I was operating on the edge with the berger hunting bullets. I would never go to Africa with them--as I feel game is too big and heavy. I used some Hornady bullets in Africa and almost lost a Livingston Eland (a waterbuck too)with poor bullet performance-- put him on the ground with a swift A frame. Really have been looking at the hammer bullets after this. may be going back to tried and true type bullets for putting game on the ground. I have a couple big hunts for me coming up--and if this would have been a mid-Asian ibex I flew half way 'round the world for--or a Stone sheep that gets me 3/4 to my slam...I'd be super sick--I'm sick enough and it 5 min from my house.
T

I too am very seriously thinking that the Hammer bullets are going to be my wife’s and my choice for next season. I talked extensively with him on the phone, he explained a lot of details and answered all the questions I asked.

I shoot a Grendel and I'm thinking 130 is pushing the upper limits for that case. I have had great success with the 123 SST and even the 123 ELD-M for that matter. The 120 Nosler BT are nice on small deer size game.
M

Hmmmm, Berger bullets have been taking it on the chin lately. Lost game not only means you didn't recover the animal but often consumes an entire hunt looking for a wounded animal. This is why the internet is by far, the best resource for real-world feedback. Some reports may be bogus but the volume of feedback from actual hunters tells the tale. No paid shills here.
C

I just keep saying it NOSLER ACCUBOND LONG RANGE, do your job and they will do theirs. From 129gr 260 rem to 190gr 300wby and many points in between they just work on hogs and deer to elk and moose 50 yards to 1000 they work.

Tracker12 said:
I shoot a Grendel and I'm thinking 130 is pushing the upper limits for that case. I have had great success with the 123 SST and even the 123 ELD-M for that matter. The 120 Nosler BT are nice on small deer size game.
Click to expand...

I would somewhat agree that 130 grains is pushing case capacity that is for sure..we are getting 2415 fps out of a 21 inch TC encore. I did not shoot this guy at extreme range. 147 yards to be exact. It would be like shooting him with a creedmoor at 300, and I see mule deer and other things "rolled" all the time at a lot greater distance with less retained energy that what my Grendel had at 145 yards (my grendle was packing about 1,500lb of energy at 145 yards). The shot was solid--might have been high--but solid on the shoulder--I watched the impact and so did my compadre. He had a 300 WSM on him--and pulled off when I did as we thought he was "toast".Just 45 min earlier we watched the same bullet/gun combo wack a 215lb hog DRT at 130 yards....I know better--a mature axis buck--are big, heavy and robust animals--they require a well constructed, well placed bullet. This was a good learning lesson for me. I myself will not use a berger bullet for a game animal again. As I said in a earlier post--I have been underwhelmed with some of the performance on game. I can count on about 6 occasions where we looked and said--"well he dead--but boy we didn't get much penetration..." This was a "backyard deer" for me but still does not make me second guess my bullet selection. I love the way Bergers shoot--but don't know if I'm sold anymore of them sheading so much of there weight...think I want a hole in and hole out from now on.
C

Wow...that is almost word for word my thoughts on the Berger bullets!

I was doing some reloading last night and forgot to weight the remains of the 130gr OTM Hybrid. I know it's going to weigh around 30 to 40 grains. It's weighs about half as much as the remains of 6.5 129 SST which was 64gr. 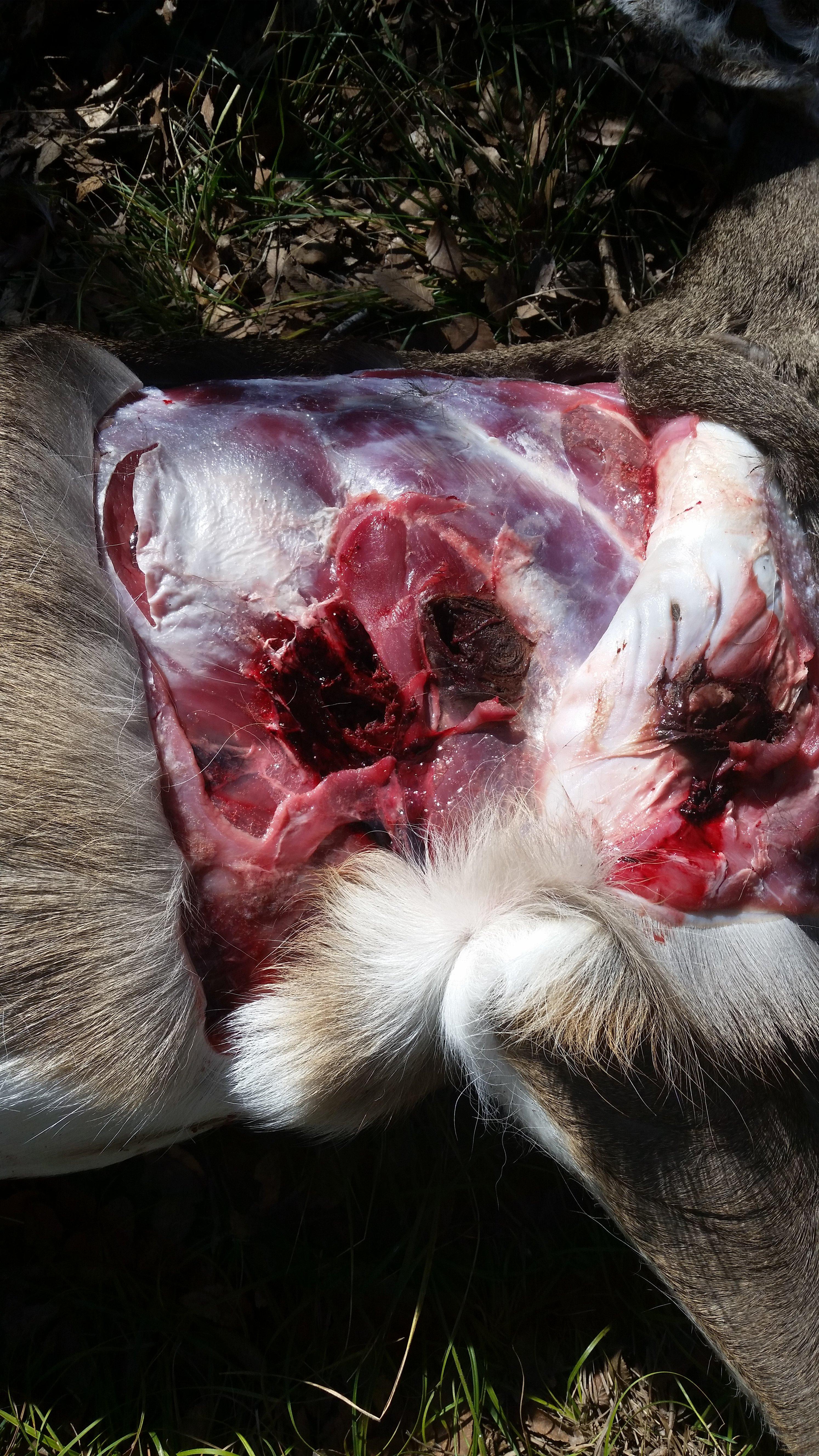 I had moved the front leg forward to expose the exit wound side. The black area is where the blood shot meat spoiled. Once the shoulder was out of the way I found the bullet.

The entry hole was in the exact same spot on the opposite side. So no shoulder blades were involved...ribs only.

Remember now this is a real small 1yo deer. 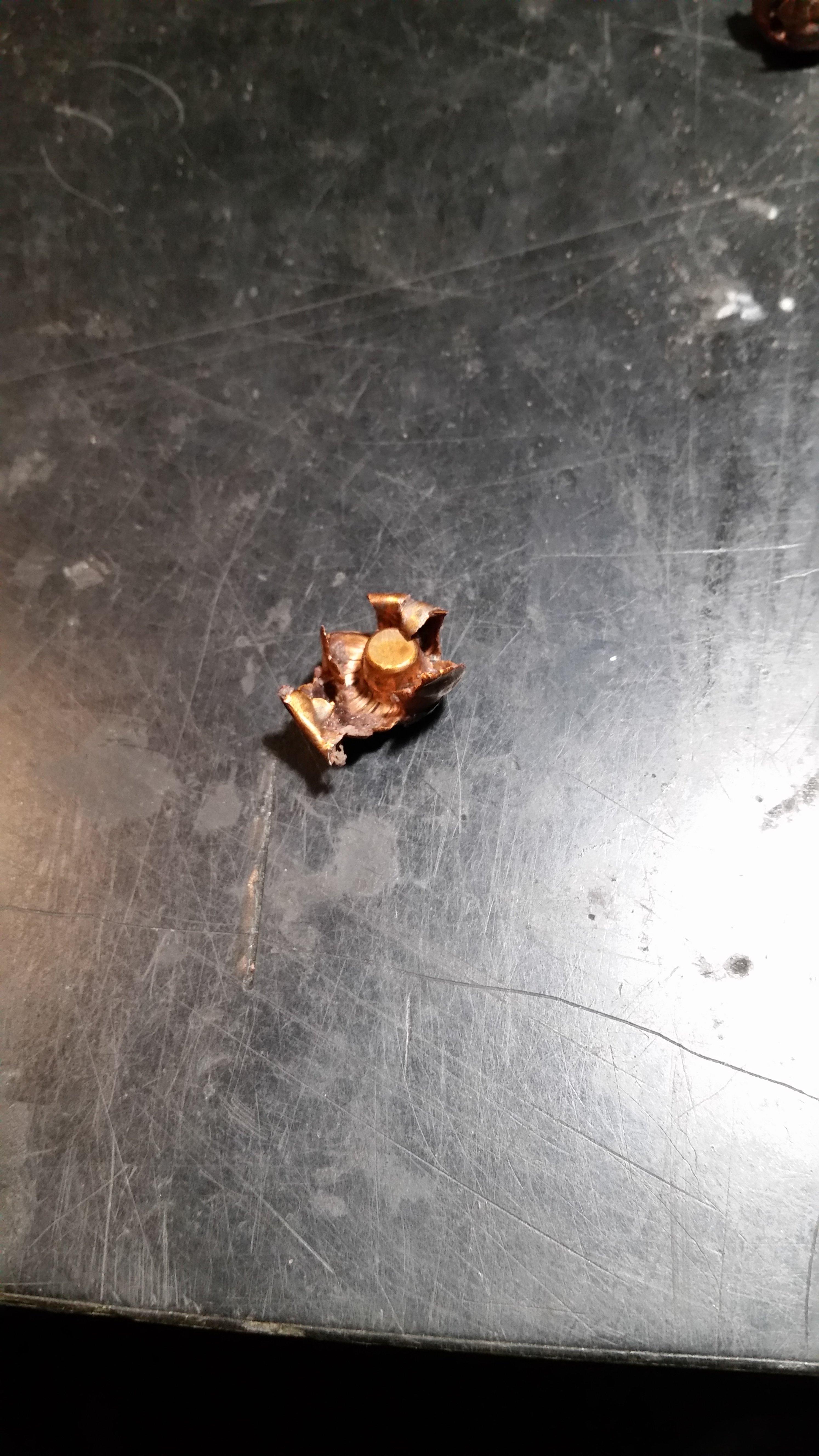 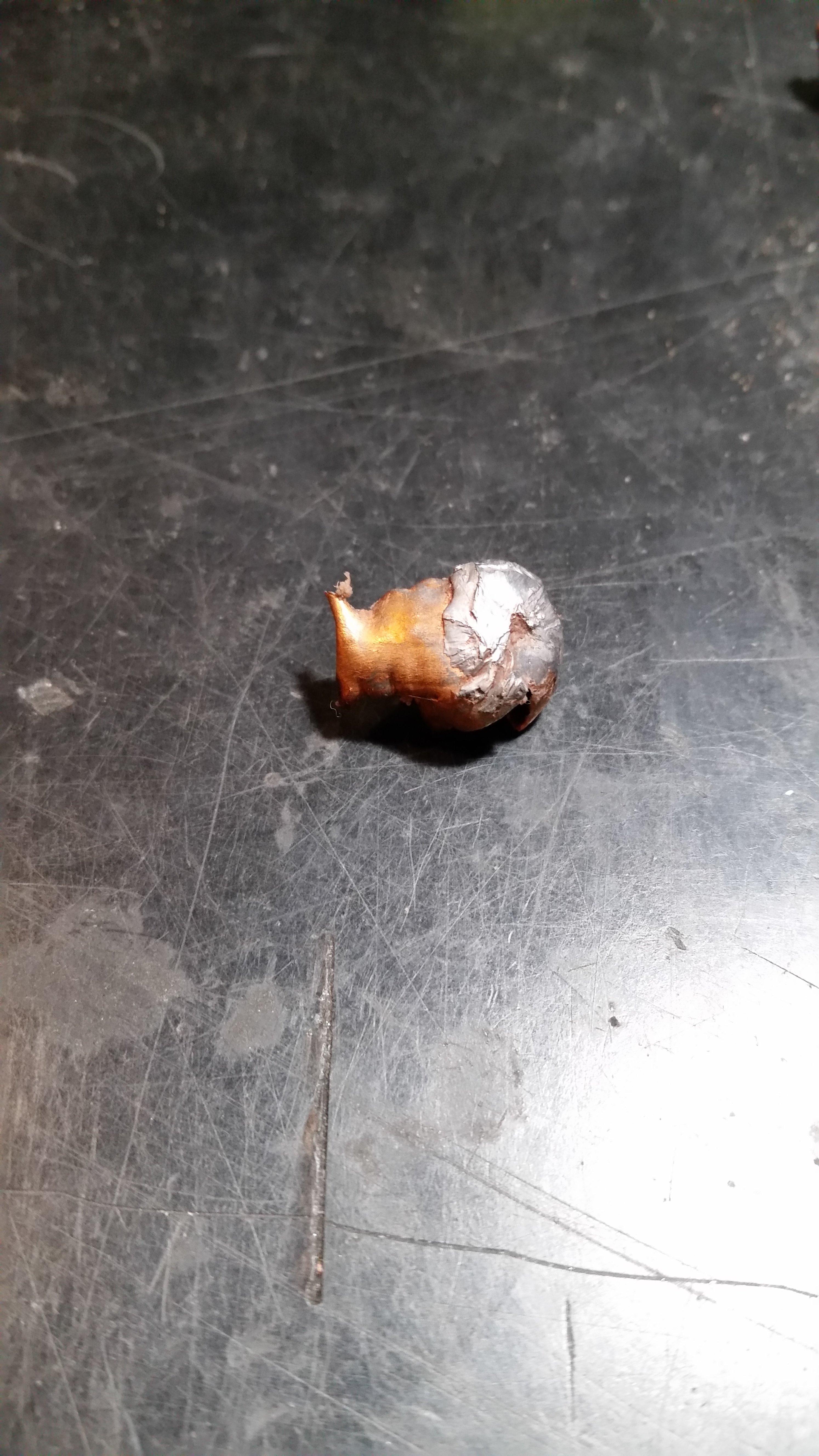 Here is the bullet. I was super surprised to see some lead still there.
T

I have never personally used Bergen’s, but have seen them fail horribly on a huge black bear, mule buck and an elk. All from the same gun in the same season. That guy now shoots eld-x. This was a 7 rm
I am currently using SST’s and have never had a problem with them. Knowing they aren’t designed for long range work compared to some newer designs, I am looking different bullets
Last edited: Nov 23, 2018

I know it's not the new fad but I have had perfect success with Nosler Partition
100 grain 3300fps in my 25-06? ..Whitetails can't handle them!
Last edited: Nov 23, 2018
You must log in or register to reply here.
Share:
Reddit Pinterest Tumblr WhatsApp Email Link