how much does bullet seating depth affect the pressure of a load?for instance can the bullet be seated too deep into the case and cause high pressure?

Typically, the deeper a bullet is seated the less pressure and velocity will be generated. Reference the following chart from Barnes 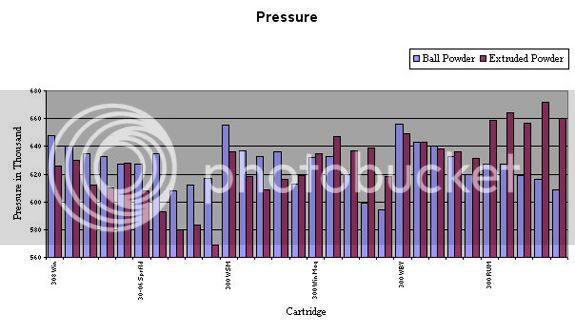 where the first loading on the left in each caliber is closest to the lands and going to the right they are seated deeper by .050". The pressures are generally lower as the distance from the lands increases.

Also this graph which I don't know the origin of 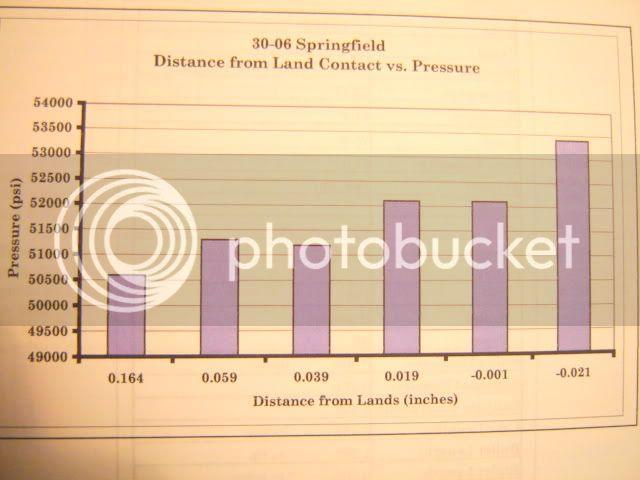 Hornady also documents this with some explanation of

"To illustrate the effects of variations in bullet travel before the bullet enters the rifling, we'll compare a standard load with adjustments made only in the bullet's seating depth.

In a "normal" load with the bullet seated to allow about one 32nd of an inch gap (A) between the bullet and the initial contact with the rifling, pressure builds very smoothly and steadily even as the bullet takes the rifling. Pressure remains safe throughout the powder burning period (B), and the velocity obtained - 3500 fps - is "normal" for this load in this rifle.

Seating the bullet deeper to allow more travel before it takes the rifling, as in these next two illustrations, permits the bullet to get a good running start (C). Powder gases quickly have more room in which to expand without resistance, and their pressure thus never reaches the "normal" level. Nor does the velocity; with the same powder charge it only comes to 3400 fps (D).

When the bullet is seated to touch the rifling, as in the accompanying illustrations, it does not move when the pressure is low (E); and not having a good run at the rifling as did the other bullets, it takes greatly increased pressure to force it into the rifling. As the rapidly expanding gases now find less room than they should have at this time in their burning, the pressure rise under these conditions is both rapid and excessive (F). Velocity is high at 3650 fps - but at the expense of rather dangerous pressure. Many rifles deliver their best groups when bullets are seated just touching the rifling. Seating bullets thus can be done quite safely if the reloader will reduce his charge by a few grains. The lighter load will still produce the "normal" velocity without excessive pressure. "


All this being said, pressures will also depend largely upon the size of the combustion chamber in your rifle. IOW, if you have a long throat that exta volume at the long leade will be a part of the equation that dictates pressures so you have to use the prologue "All other things being equal....................."
P

thanx woods
the reason for my question is i had to back my loads down by quite alot because of pressure signs and i wasnt happy with my velocities afterwards. so i loaded a couple of rounds that i knew was high pressure so my smith could assist in troubleshooting he thought maybe my chamber is on the low side of spec and didnt think he would need to fire the rounds so when i got home i proceeded to disassemble the rounds with my rcbs bullet puller (hammer) and i noticed how much more difficult these loads were to disassemble than other calibers i have disassembled and i was curious because i did seat these pretty deep in the neck of the case

Then I guess the next questions would be:

How far off the lands are you loading?
Do you have a magazine restriction, IOW do you load to fit the mag or load to fit the lands?
What caliber and what powder are you using, IOW can you gain velocity back by going to a slower powder?
What is your bullet grip, sounds like it is strong, maybe more than necessary?
What is the length of your barrel?
What bullet you shooting?
What primer you using?

this particular rifle is my 220 swift that i just had rebarreled with a 22" lilja stainless.i never checked how far from the lands the bullet is seated i just started these loads at the same cartridge length i had with the old barrel and the accuracy is superb it shoots the 50 gr sierra blitzking 3 shot groups consistantly at .340 @ 100 yds with an occasional .250 three shot group but i had to drop down to 3200 fps to get away from the pressures (i.e. stuck bolt).this load is using imr 4064 powder and fed 210 primers. i am very happy with the accuracy just not the velocity, 3200 fps is 223 velocity not swift velocity.i do realise i will lose some velocity with the shorter barrel but i wouldnt think i lose this much.
and the reason i went to a 22" barrel is i wanted a faster handling rifle for coyotes
i also shoot a 300 RUM but i dont have any issues with it just YET!
B

"for instance can the bullet be seated too deep into the case and cause high pressure?"

You (finally!) assure us you're shooting rifle. Okay...

As a general rule, seating deeper for rifles actually reduces peak pressure a tad, so long as it's rational. But all bets are off if you push the bullets though the neck! (I only add that part because there's often someone who wants to take things to extremes to voice an objection! )

That is terrible velocity for a 220 Swift.

i am had to drop down to 36 gr to get away from any pressure signs 36.5 grains and the bolt will have to be forced open
with the original barrel i was using 39.5 grains and had a velocity of 3800 fps out of a 24" barrel.like i said i expect to lose some velocity with a 22" barrel but i dont think i should be down to 3200 fps.
the smith i took the loaded rounds to is not the smith that rebarreled my gun
the smith that did the rebarreling happens to be a benchrest shooter and when i talked to him he was telling me he used a match grade reamer i dont know if there is any difference between a match grade reamer and a standard reamer but if there is i suspect this is what is causing the pressure.
but if the bullet is being held to tight by the case how would i remedy that?

Match grade reamers leave a tight chamber. This brings up 2 other possible explanations:

What is the measured OD of a FIRED & UNSIZED case neck. If he reamed a tight neck and your neck brass is too thick then you could have no clearance around the neck in the chamber. That would lead to added pressure. Take a bullet and see if you can insert it down the neck in a fired case.

A tight chamber sometimes will not allow your brass to grow large enough so that your die will size the case body. I have a 280AI where the Redding Body Die does not size the case body and I have hard bolt lift after 3 or 4 firings. The body die will push the shoulder back but will not size the case body and it is binding in the chamber. Goes in easy enough because of the taper and the added leverage of pushing the bolt in, but lifting the bolt handle does not provide as much leverage and it binds. This is a minor inconvenience only and not a dangerous situation.

Do you have any other pressure signs such as flattened primers or shiny spots on the case head?
P

Goes in easy enough because of the taper and the added leverage of pushing the bolt in, but lifting the bolt handle does not provide as much leverage and it binds. This is a minor inconvenience only and not a dangerous situation.

i copied your discription above this is exactly what i am having. if i back the powder charge down i dont have this

Take a bullet and see if it will go in the neck of a FIRED & UNSIZED case neck.

Measure the OD of a FIRED & UNSIZED case neck.

Measure the OD of a LOADED round.

Look at the case head of a FIRED case and see if the primer is flattened or if there is a shiny spot.
P

Take a bullet and see if it will go in the neck of a FIRED & UNSIZED case neck.

Measure the OD of a FIRED & UNSIZED case neck.

Measure the OD of a LOADED round.

Look at the case head of a FIRED case and see if the primer is flattened or if there is a shiny spot.
Click to expand...

a loaded round measures .258 on the neck

the primer looks fine not flattened or shiny spot but it is flush with the case
i seat them .008 below flush

Okay, a bullet should drop into the case or you don't have enough neck clearance. The case neck should expand to the chamber neck walls and provide clearance for the bullet to exit. Now at the pressures in the chamber the brass is not going to be a major hindrance to bullet exit, but it will have some effect if the brass does not expand clear.

It is puzzling though that your loaded round OD is .258" which is smaller than your fire formed size of .2605". You should have .0025" clearance around the neck when you subtract those 2. Recheck that .258".

Question: Does the bullet go partway in the neck and hang up at the neck/shoulder junction?

If your chamber neck was reamed to .261" (allow a little for springback) then the math would be:

Question: Do you have a good way to measure neck thickness, i.e. a ball micrometer?

If you are not getting any other signs of pressure then that means the chances are increased that it is a mechanical problem and not a powder load problem. A primer will reseat flush with the case head after firing and that is completely normal, it would be abnormal if it did not.

It is possible that if you outside neck turned the neck to a thickness that would allow the bullet to drop into a fired case, then you would be able to work back up on your powder loads for more velocity.
P

would neck turning the brass be better than having the smith that chambered the barrel open the neck a couple of thousandths
You must log in or register to reply here.
Share:
Reddit Pinterest Tumblr WhatsApp Email Link