There seems to have been rising interest in these bullets, but information is spread out and somewhat limited, so hopefully this thread will help consolidate information.

I would like to keep this thread somewhat organized, accurate, and to the point. If you have first hand experience please share it! If you want to tell us why we should just use brand x, please just save your time.

I have personally loaded two of their bullets so far. The 128 Bulldozer, in a .270 Sherman, and the 270 Super Bulldozer, in a .338 Norma Mag. From my experience with these two bullets, they do seem to reach max pressure with a lower powder charge compared to typical lead core bullets. Accuracy has been very good and easy to achieve. As far as animals taken, I have not taken anything with the 270 grain .338, though this year I will be using them. My cousin has managed to take two animals with the 128, one 6x6 bull and one California blacktail. The blacktail was hit through the shoulder on a broadside shot at around 75 yards, and made a death run 50 yards down a steep hill, leaving a significant blood trail, and piled up against a tree. The bull elk dropped dead in his tracks on the side of a very steep hill, the shot was quartering away up hill as the bull was turning to run, around 100 yards away. It entered behind the shoulder, and ended up under the hide on the neck on the off side, after penetrating around 2 foot of heavy elk. When the bull was processed, no heavy bone or spine was hit, the bullet passed just under the spine, but again, the bull dropped dead in his tracks. Thus far, terminal performance seems good, but we have no experience with extended 500+ yard shots. I should be changing that mid August....

Here is the bullet recovered from the bull in the following photos. It appears to have performed in a similar fashion to the hammer type projectiles, loosing the front section causing more damage, and the remaining shank penetrating deeply. It is stated that this will happen at close range impacts, though on lower velocity impacts, the petals will remain on the bullet and expand as typically expected. 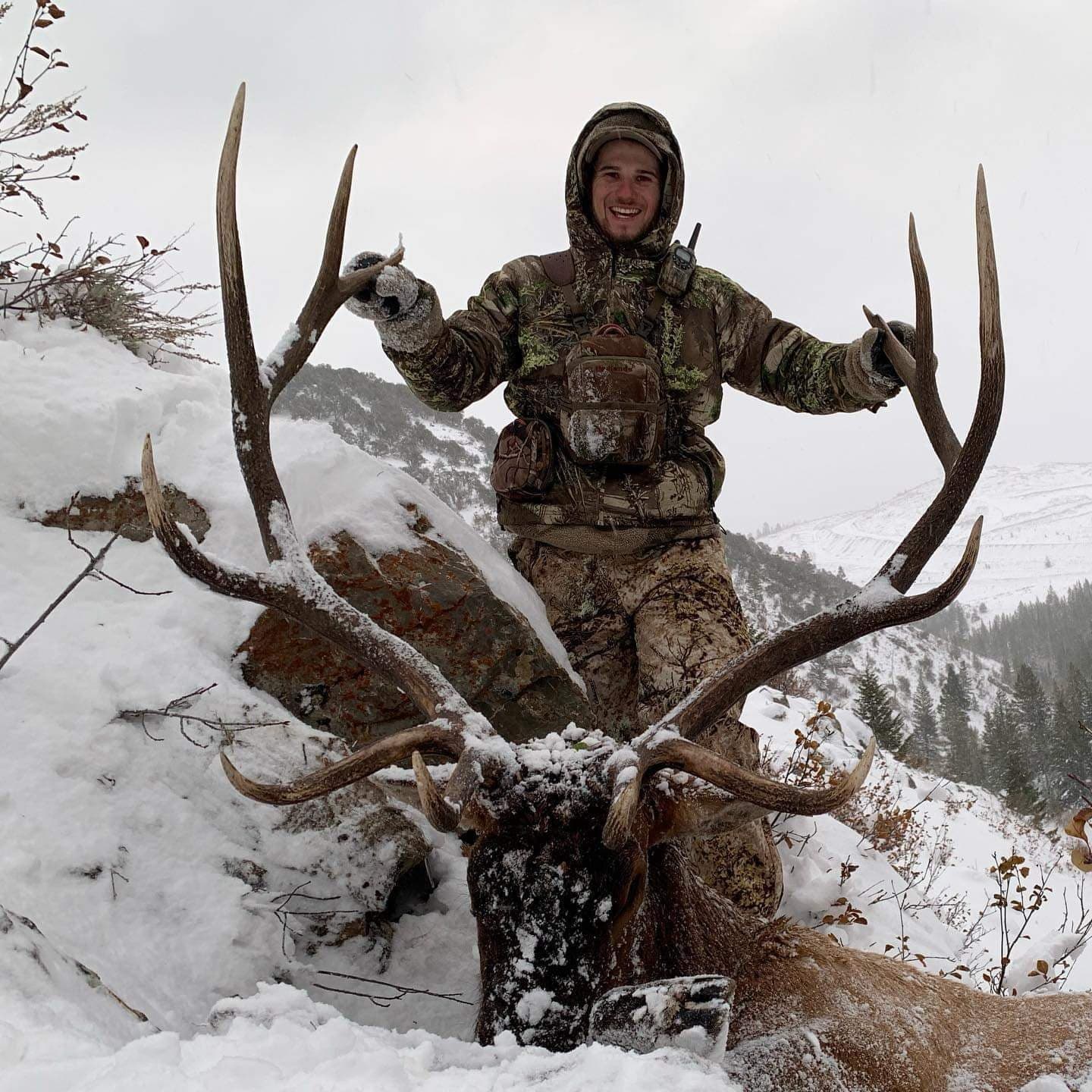 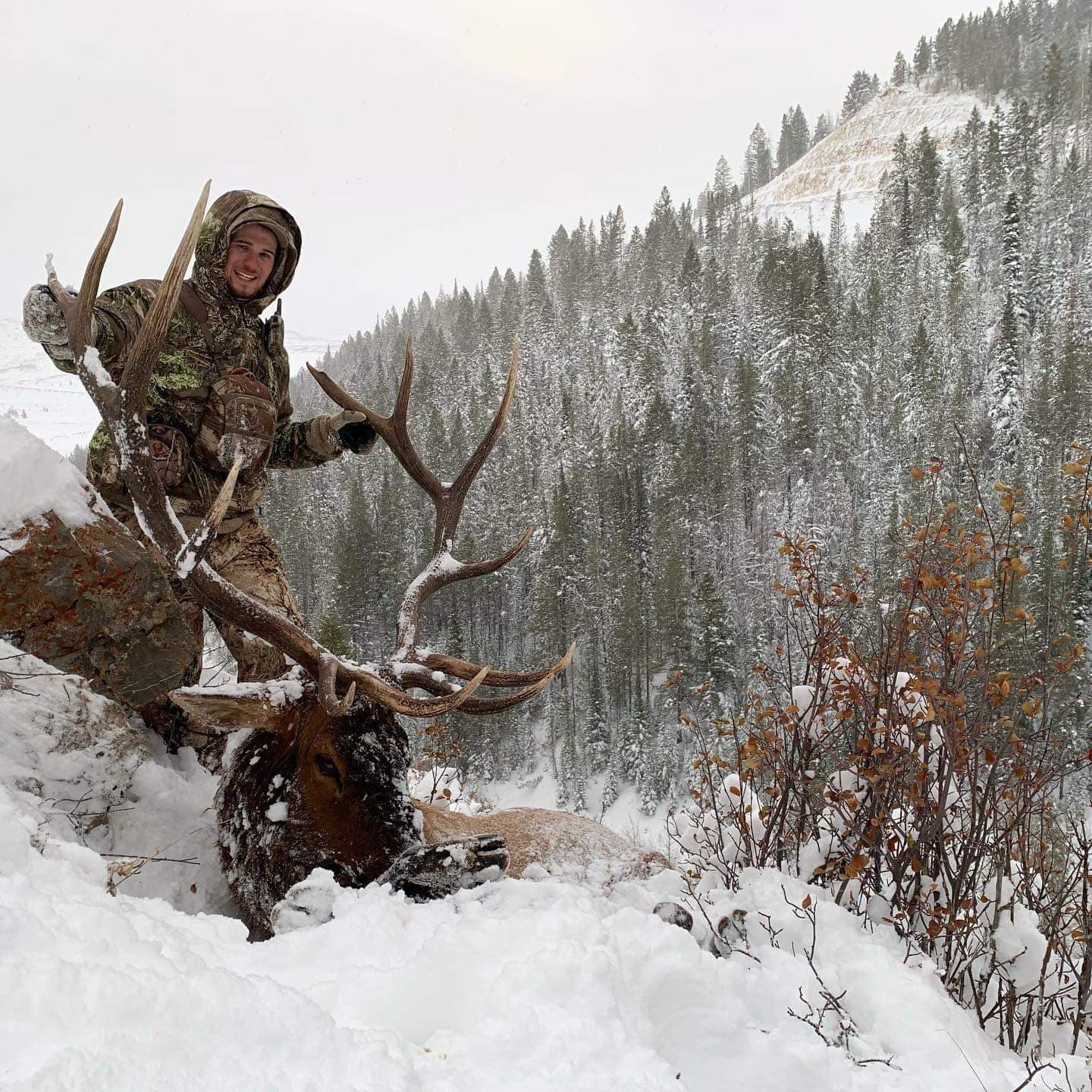 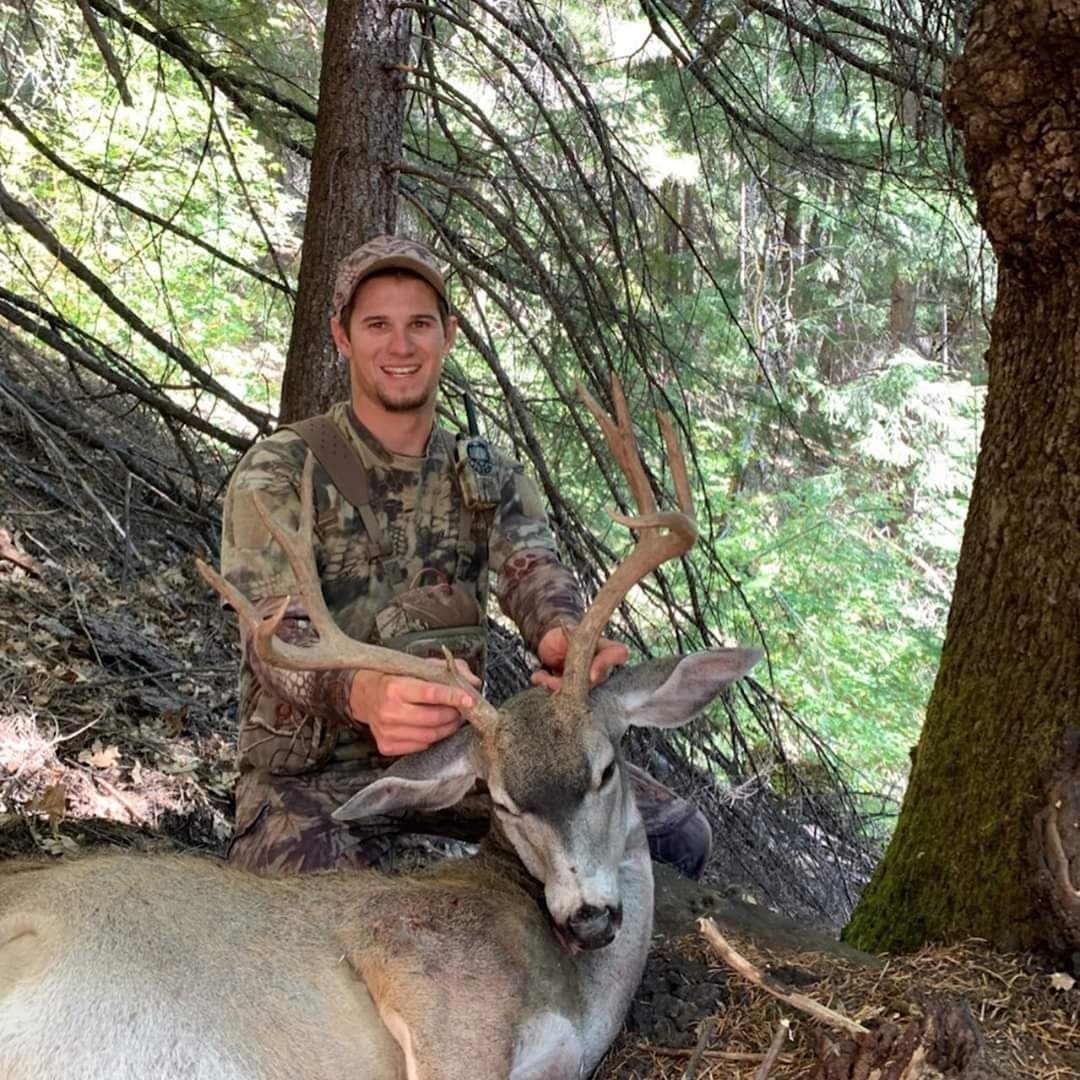 And here is the California Blacktail. My cousin did not take any photos of the damage, but said the lungs were the typical bloody mess, and there was very little meat damage. 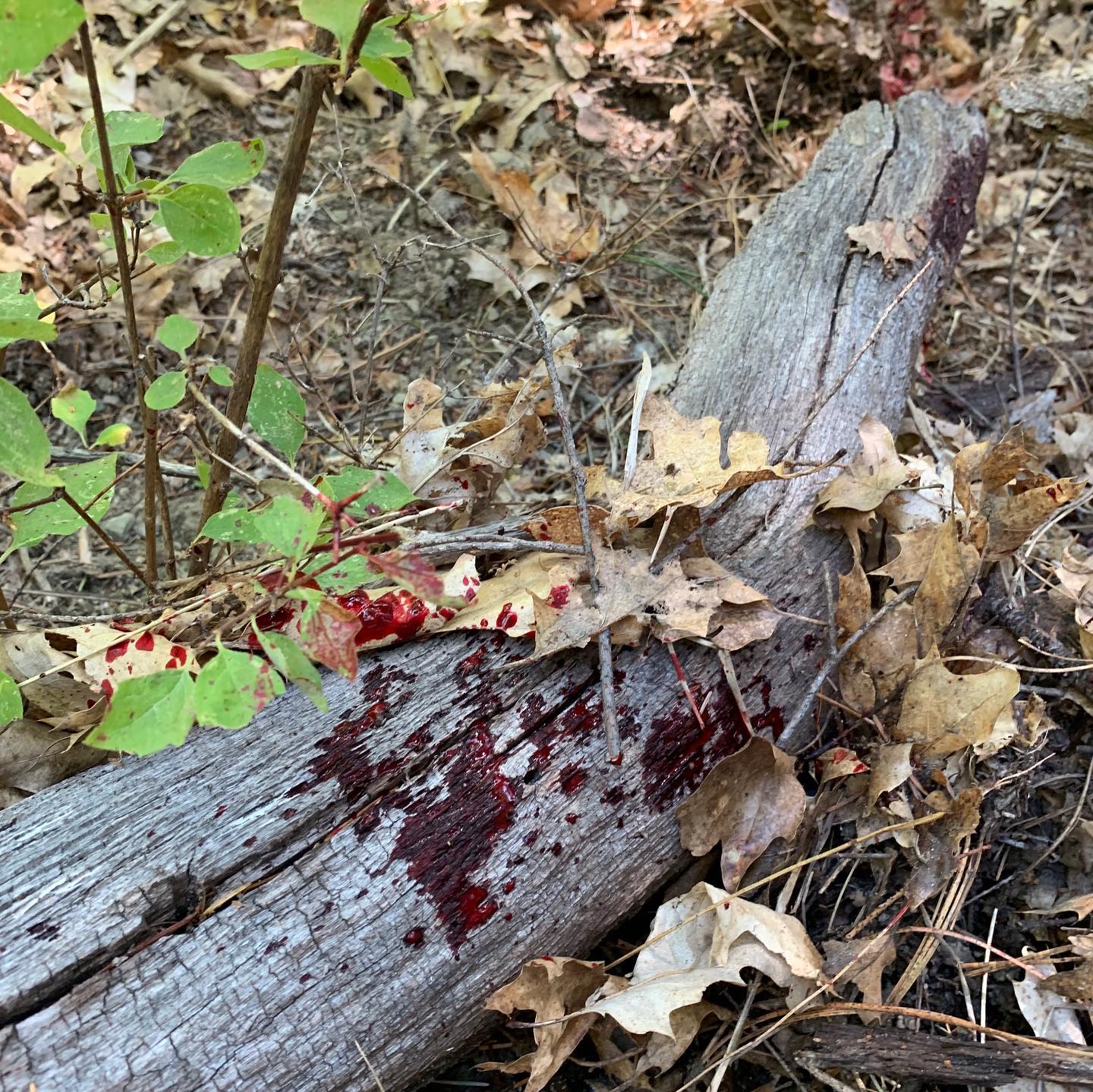 And a photo of the short and heavy blood trail.


This is only a very small sample of animals taken and bullets tested, but hopefully this thread will, over time, expand the knowledge base on these projectiles.

In talking with George, he is redesigning all of his bullets to have a higher bc. He has already done it with the next bullet I plan to test in my Wife's rifle once it is finished, a 145 grain 7mm bullet with a G1 bc of .620, or a G7 around .307. On their site, it is listed to have a .520 G1 bc, but there is a different model number for the new design and higher tested bc.

In addition, his prototypes with improved bc's are shaping up to be quite impressive. He sent some of his .338 cal 265 grain prototype solids to another long range shooter I know, and running them at 3185 fps from a 9 twist, has been using a G7 bc of .475 out to 3560 yards. The 270 Super Bulldozer, once redesigned, should have a very similar bc, according to George. This would put it in a different class than any other .338 hunting bullet, to my knowledge. Full information on the redesigned bullets should be available at shot show this year.

I will outline some of the kills that I have been told about by other members on here, I will not go into great detail though as they are not my kills, if they wish to comment further I will let them do so. These include a Kodiak brown bear taken at 50 yards with the .338 275 bulldozer, the .308 cal 196.5 grain used to take a dall ram at 225 yards, a bull caribou at 125 yards, a small grizzly at 135 yards, and a mountain goat at 525 yards, and the 145 .284 cal to take a dall sheep at 205 yards. No complaints on terminal performance, with good comments on the lack of meat damage, and also state that advertised bc's have all been relatively close to observed bc's, and all stated that these bullets do tend to pressure up with lower charges than lead core projectiles, though max speed usually isn't hindered a significant amount.

Alright, that is about all I got for now. Anyone else, please feel free to add your experiences with these bullets, and remember, photos make everything better!!

Next saturday is opener of doe/fawn pronghorn, went out tonight to confirm my load at 303 yards, looks like it's still doin good. Excited to see what kind of performance we get, it should be on video too.

Range was only 187 yards, so pretty close. My intent was to put it right behind the shoulder to see if I would get expansion with only hitting the thin rib area, but I couldn't make myself aim that far back, I hate field dressing pronghorn that have any gut ruptured, and I have seen fragments of bullets go back and get the gut even with a good hit, the vitals on a pronghorn doe aren't very big.

She was perfectly broadside, and I put it square through the shoulder, about top of the heart, and did not hit any bone on entrance. The wound was quite devastating, however as you can see from the cleaned up picture, meat loss was far less than the exit hole would make you think, the blood shot seen between the rib cage and shoulder on the exit side washed off with water, and was not in the meat. The last picture of the shoulder on the table was essentially all salvaged, with only slight trimming needing done. The lungs were heavily damaged, and the chest cavity full of foamy chunky blood.

She rared up on impact, which I watched, then stumbled about 10 feet forward and hit the dirt. The exit side bone from the scapula to the leg was broke, but it was not hit with the bullet, my guess is that the energy from the bullet passing through broke the bone. The bullet passed in the pocket between that bone and the scapula, and actually didn't hit any bone (other than ribs) on the exit either, just barely missing the scapula, so the damage seen is simply from the bullet, that initiated expansion after passing through the entrance side shoulder and a rib, and came unglued after that.

And of course, some pronghorn tenderloin.....slightly overcooked for my liking! Ha ha.

Now I want to try a longer range poke, 600+ or so, and see how they do. Will update with my next harvest. So far with my personal sample of 1, I am happy with these 270's. Lets see if that trend keeps up!
Z

Is this bullet finicky to load for? Or does it shoot good right off like the Hammer? If it is easy to load for would definitely give it a try.

I haven't had any issues finding a good load in the two guns I have loaded them for, pretty easy and not that picky
W

Great start! Definitely interested in hearing the rest of your hunting reports!

Excellent write up to an excellent harvest. I agree with you, the T-loin was overcooked.

This brand of bullet is new to me. Would like to see some accuracy test . It obviously works on game. As time goes on there is going to be more competition between mono bullet makers. As I see it , ease of loading & obtaining good accuracy will be a significant consideration. I appreciate you bringing this bullet to my attention. Always looking for new inovation. .
Last edited: Sep 9, 2020

Hespco said:
This brand of bullet is new to me. Would like to see some accuracy test . It obviously works on game. As time goes on there is going to be more competition between mono bullet makers. As I see it , ease of loading & obtaining good accuracy will be a significant consideration. I appreciate you bring this bullet to my attention. Always looking for new inovation. .
Click to expand...

From what Ive seen, they are very accurate! Several of my SS shooters have used them. They also have a very high b c for a hunting bullet and an aluminum ballistic tip.
M

Great write up and presentation!!
W

Hespco said:
This brand of bullet is new to me. Would like to see some accuracy test . It obviously works on game. As time goes on there is going to be more competition between mono bullet makers. As I see it , ease of loading & obtaining good accuracy will be a significant consideration. I appreciate you bring this bullet to my attention. Always looking for new inovation. .
Click to expand...

Ya it came together pretty easy for me. I did a seating depth test, every .015" from .005 out to .105" off, and there was only a very slight variance, all were acceptable, shot best for me at .050" off though. In talking with George, the owner, he said most people end up from .020 to .030 off. I honestly think accuracy would have been acceptable anywhere as far as seating goes. Shooting around 1" at 300 yards for me.

For comparison, I loaded up the 285 Hammers in this same gun, and as far as finding accuracy, The Badlands were just as easy. Went with these because of the .407 or so BC vs the .355 for the 285 Hammers, and I was topped out around 2785 with the hammers, and got up to 2875 or so with the Badlands.