I recently won a Sako 22-250 bolt action and I want to load the Barnes "Varmint Grenade bullets in 50gr. What is the general opinion on the most accurate powder for this combination?
D

Thats what I am using in my 308. Has anyone heard about the Barnes Varmint Grenade 50gr bullets working better with a paricular twist rate? 1:10 compaered to 1:14?
D

Varget! I shoot mostly nosler ballistic tips but this powder works well. Ive had the same load for 3 years now and it doesnt matter if im shooting coyotes in neg 20 or popn prarie dogs in mid summer. Check it out.
W 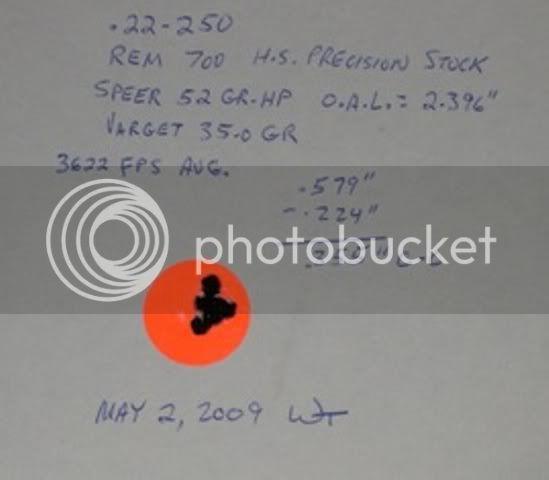 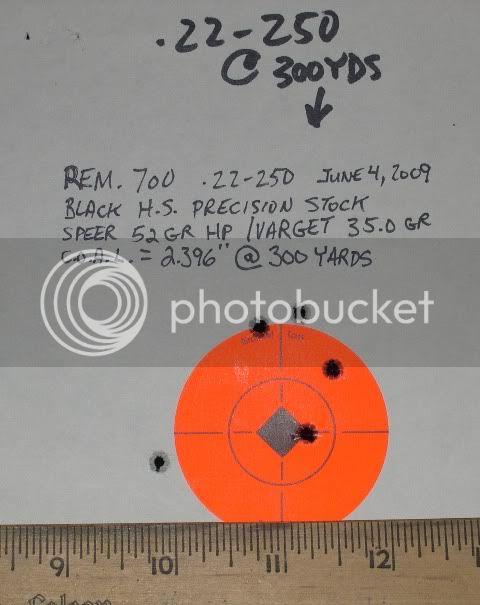 What type action and barrel lenght is your gun?
W

Remington 700, short action and I believe the barrel length is 26". The stock is factory original and appears to be an H.S. Precision stock with an integral aluminum bedding block. I glass bedded the action, rear tang, recoil lug and about an inch of the barrel ahead of the recoil lug. I also adjusted the trigger down to about 2 1/4 pounds. The scope is a Burris Black Diamond (30 mm tube) 8x-32x with 50mm objective lens. Leupold one-piece base and Leupold rings. gun)
T

Sounds like an excellent rig. It gives me some ideas for my build. Thanks and straight shootin!
J

I've had allot of luck with Varget and the 52 Hornady A-max. Very explosive and works well for local groundhog matches as well.

I typically use a 50g Nosler Ballistic Tips for everything from prairie dogs to coyotes. I'm using 34.0g Varget, not the hottest load, but it's accurate.
Remington 700 VS 26" barrel w/ 1:12" twist.

This was an unnamed spherical rifle propellant when the late Bruce Hodgdon first used it. When a 38.0 grain charge behind a 52 grain bullet gave one hole groups from his 22 caliber wildcat (now called the 22-250), he appropriately named the powder H380. H380 is also a superb performer in the 220 Swift, 243, 257 Roberts and other fine varmint cartridges. Available in 1 lb. & 8 lb. containers.
T

Do the spherical powders burn dirtier than extruded powders?
R