Just three weeks ago I found out that I had been nominated by the local Marine recruiting station and selected for a wounded veteran's hunt sponsored by the Sgt. Daniel D. Gurr Foundation. The foundation coordinates with local land owners and hunting guides in Utah to provide world class hunts for wounded veterans. The following is my experience.

I served with 3rd Battalion 7th Marines for just under 4 years when I was medically retired from complications due to wounds received in combat. Since then I have been attending the University of Utah full time and I am currently in the final semester of my senior year. I grew up in southern California and had a strong interest, but never an opportunity to go on a real hunt until now.

In early October I received a call from the Sgt. Gurr foundation and was informed that I had been reserved 5 days to hunt on the Little Red Creek CWMU, fully guided and catered. A once in a lifetime opportunity that I obviously couldn't pass up.

After getting out of class at 21:00 I picked up my cousin and we made our way to camp. We arrived at 23:00 and were instantly greeted by our guides, the "Rough Riders", George and Kayden Kennedy. They invited us into their trailer where they explained to me what the plan of the day was for the hunt and I explained that I had only one day to hunt since I had to be back at school the following day. We then preceded to look at the pictures of all the animals that had been taken on the CWMU that season, which was impressive to say the least.

At midnight George and Kayden showed my cousin and I to our trailer and I laid in my bed wide awake until 05:45 when I decided I was finished waiting and wanted to get dressed and ready to go. We met our guides outside at 06:15 and were on the trail at 06:30. We stopped about a half mile in to the CWMU to tease me with a few does and some smaller bucks in the predawn light. The scenery was so breathtaking that I almost forgot that I was supposed to be looking for a deer.

After going several more miles in we came over a ridge and saw a large group of deer just to our north on a slope about 150 yds away. The guides instantly spotted and got me on a really nice wide, mature, 3x3, but I spotted another smaller group of deer about 400 yds to the east of us that I wanted to watch for a while. Just a few minutes after watching this group to the east, out of the scrub brush came 2 nice bucks, a 3x4 and a 4x4. I instantly knew I wanted the 4x4 and I told the guides my intentions. They called out the distance and suggested that we move a bit closer, but I was confident that I could effectively engage the buck from where we were therefore not having to risk spooking them.

I found a nice spot to lay down in the prone and dialed the dope for my R and B Rifles built Surgeon 591 in 6.5 Creedmoor. I have used this rifle in numerous matches and it has earned my trust beyond reproach. As I got on target my heart started to pound so hard in my chest that I could feel it pulsing in my ears. I have never felt excitement like this behind a rifle before, not even in combat. It took me a few seconds to control and reduce my heart rate to a cadence that I felt acceptable, and as I began to put pressure on the trigger, the 4x4 started walking directly away from me.

It was approaching the top of a small knoll that leads down into a large canyon thick with tall vegetation. George, the elder of the two, made a grunting noise which stopped the buck but didn't get him to turn broadside, and he continued toward the crest of the knoll. Fearing we'd loose him, George grunted again and the buck stopped and faced us just enough to present a reasonable target. There was no wind and I had my dope dialed for 430 yds, and just as I was about to break the shot, the sun came over the horizon and smacked me directly in the face causing me to almost completely lose my sight picture. A quick adjustment of my hat blocked the sun enough to get me back on him. Quickly going through my pre-shot checklist, I reapplied pressure to the trigger and sent the 140 grain A-max 2800 fps directly into the lungs of the buck.

I never lost sight of the buck durring recoil and was able to watch the round impact right at my POA. He didn't even take a step, and dropped like a French rifle.

Needless to say we were all ecstatic and exchanging congratulations and thank yous. I have never felt a high like that before and I am deeply humbled and grateful for the opportunity to hunt in such beautiful country with such amazing people.

I was later informed that a local meat packer and another local taxidermist offered to butcher the deer and do a complete shoulder mount free of charge. These people offered these services out of their own free will and out of their own expense, without anyone requesting it. I am truly, truly humbled by the generosity and sincerity of the people involved in putting this hunt together for me. I can only hope that I can someday repay them for their kindness towards me. 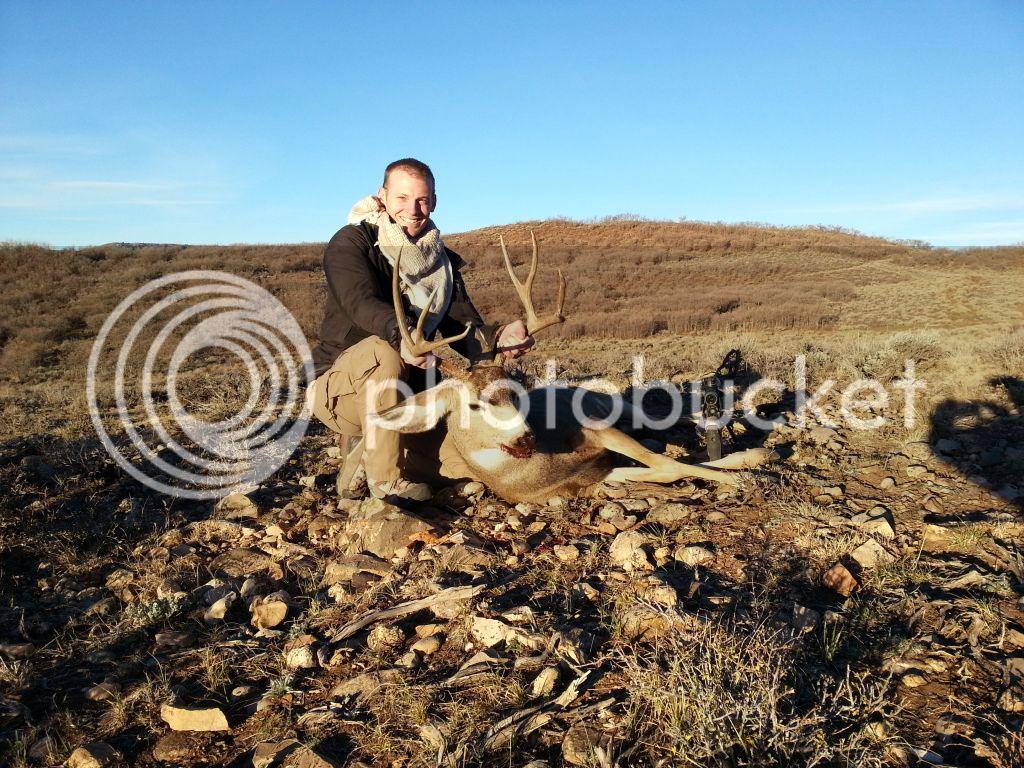 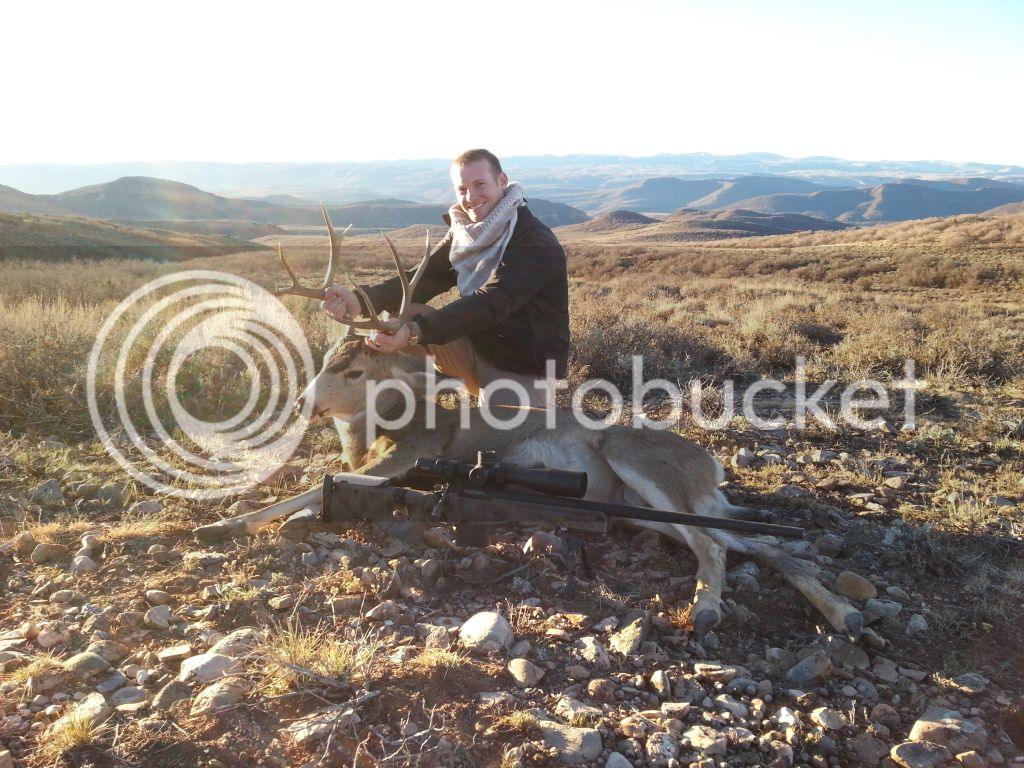 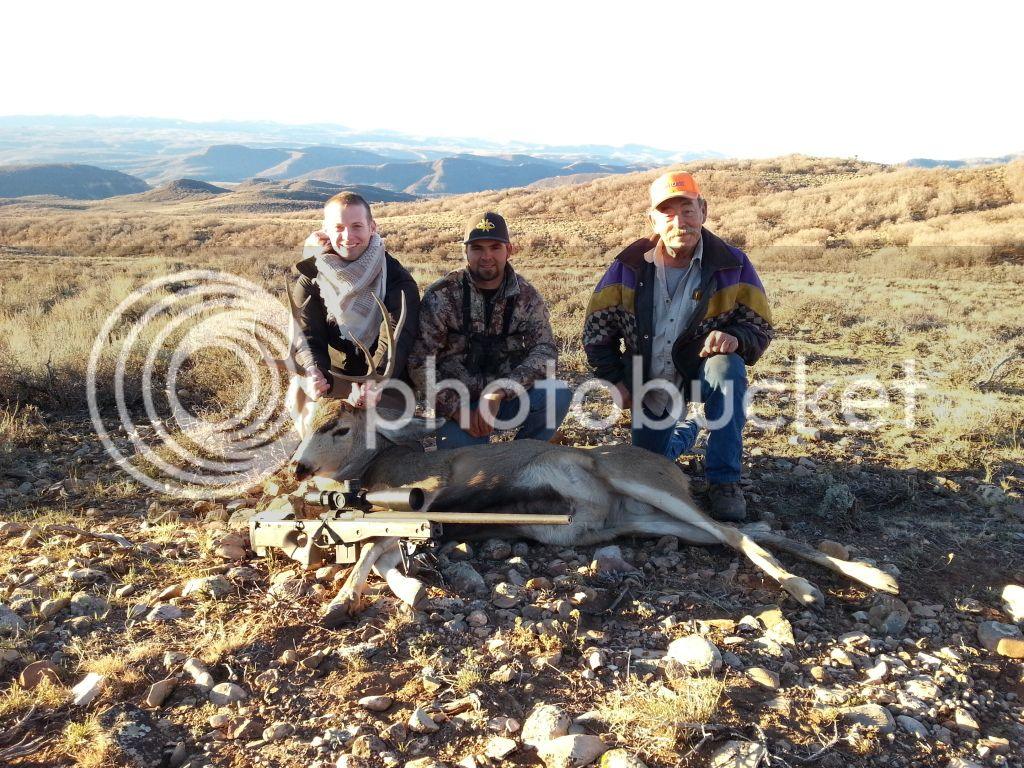 Nice write up thanks for sharing the back story, I like this line "dropped like a french rifle" . Great deer as well, the guys your with look familiar, do they have a show on tv or something? Did you ever share that rifle with us before she sure looks good. Congrats on the nice animal.
G

Congrats on a very nice buck! Thank you for your service and sacrifice to our country!

It's always great when people donate to wounded warriors and servicemen and women in general. Those are the people that usually get my business.

I don't think I've posted a picture of this rifle on here before, but I have talked about it.

These guides have been working in Utah for a long time but I'm pretty sure they don't have a show. I wish they did. They were able to spot deer, ID the bucks, and tell me if they were shooters before I could even see them and I fancy myself a fairly good observer.
D

BlackWhiskey said:
I can only hope that I can someday repay them for their kindness towards me.
Click to expand...

Sir, you served in the US Military. You do not need or should even wish to repay anyone. Your service is greatly appreciated by me. Congrats on a great hunt and great buck!
M

First, Thank you for your service!

Excellent write up and pics. Semper Fi and happy 327th birthday, from one wounded warrior to another.