Would you add powder or monkey with seating depth on this?

Anyway, the 55 grain through the 56.5 grain charge groups were all in the half inch or less size. The 56.0 grain charge produced a nice 1/4 minute 3 shot group.

Now, I think I can easily reproduce that 56.0 grain charge group and if so I can stop there. However, I could be sacrificing up to 2 grains of powder, maybe more. The H4831SC groups turned out to be all about an inch so I switched powder to Retumbo and I'm glad I did.

Would you find out the max powder charge of Retumbo, then work with some loads at that charge and down a grain, grain and a half and test a few seating depths, or would you confirm the 56.0 charge and just run with that?

You seem to be thinking like I used to think.

The 1/4 MOA groups if consistent will do more for field accuracy/confidence than more velocity.

After having to purchase that barrel from you several hundred rounds earlier than expected I'd have severe second tho'ts on the extra FPS.

At what range did this happen?


If it were me I would do it just to see the result I suppose.
D

ICANHITHIMMAN said:
At what range did this happen?


If it were me I would do it just to see the result I suppose.
Click to expand... 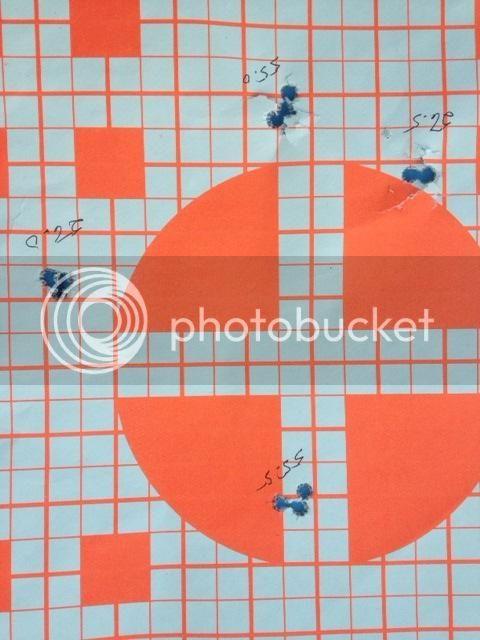 jpeaston said:
If it were me, I would repeat the same test you just did, but at 500 yards. Then when one goes 1/4 to 1/2 moa, I would verify it, and if it checks out, I would roll with it no matter the speed.
Click to expand...

Around here I don't have that readily available. I have to drive 80 minutes to Grant Co., KY to a friend's cattle farm to do that and then I have to borrow his atv to place the target. I agree it's a great thing to do but a real hassle unfortunately. The gun club goes to 200 yards. I have a friend that is a member of another shooting range but it's also an hour away and since I'm not "NRA" certified, they won't let me shoot past 300 there.

Each and every time I've gotten a group like you see with the 56.0 grain charge at 100 yards, it has been repeatable, and consistent with the last 5 custom rifles I've had. There are 2 that took some work to get consistency.
K

How far out do you shoot at game? Or do you just target shoot?
M

it would be worth it to me to make a least one trip to a 500yd range with a couple of differant loads to ck my 100yd group. those are very nice
D

Korhil78 said:
How far out do you shoot at game? Or do you just target shoot?
Click to expand...

During years when I have more practice time, I'll take a good poke out to 1000 yards. I've had some personal projects going on full time since spring of 2009 and I'm finishing next month so I'll be back to my old self shooting regularly in KY where I can take long shots. Just been too busy the last 3 years.
D

MR.SWIFT said:
it would be worth it to me to make a least one trip to a 500yd range with a couple of differant loads to ck my 100yd group. those are very nice
Click to expand...

I'll be in CO a couple of days before my season opens and will be able to shoot all day for 2 days with unlimited distances. That said, I'm not planning on taking a shot unless I'm confident and this year with these 4 new rifles, I'm going to keep my shots under 500 unless my 2 days of practice changes my mind. I'm not one to hunt/shoot at distances unless I'm REALLY comfortable with everything before I consider taking a shot. Any doubt, no trigger pull.
K

I would load the other ones that you wanna test and shoot them to see how they do and then take the loads I like and shoot them at 500 when you get a chance. If I was going hunting soon and didn't have time then I would just load up the 1/4" group and run with it.
D

Probably what I'll do.
M

Lots of good ideas and info. I prefer H1000 for 140s in 6.5x284. I've seen some squirrelly things from Retumbo, and lot to lot variations in H4831 are bigger than I like. I stopped searching for velocity once I found accuracy a long time ago. Life's to short to chase velocity and accuracy at the same time. 2900 fps is plenty.
Share:
Reddit Pinterest Tumblr WhatsApp Email Share Link

B
Seating depth or powder charge?