Ramblings and Such From Hunting Coyote

This is the time of the year that I like to use adult animal sounds . Doe blats , jack rabbit ect. for coyote . For fox and cats I like a higher pitched sound some of the bird sounds and cotton tail rabbit sounds . Rodent sounds and low volume sounds if any of them are hung up at a distance . Nearing the end of December or the first part of January I like to stop using destress sounds and will start using coyote vocalizations for the coyote mostly howls with very few barks . Female chirps whines and whimpers also starting in late December as they are starting to think about breeding season . Fox also have their sounds they use during breeding season and work well . Have you noticed coyote , fox or cats come to turkey and other wild life sounds while you have been out and about this time of the year ? Many adult animal sounds will get them to come in other then a lot of the standard distress sounds it doesn't need to be an animal distress sound for them to investigate it .

I am a vid turkey hunter and I have killed a few predators over the years while blind calling during the day. The cats especially more so in the late afternoons. The coyotes it did not seem to be a favorite time early middle or late. This is during the spring season though

15 years ago (Im guessing here) i took my buddy out with me yote huntin. We both recently bought varmint rifles. I had a Rem700 heavy barrel stainless fluted 220 swift. He opted for a 22-250 of the same only blue heavy barrel. We parked his truck and walked down this draw about 200 yards from the truck and got set up behind this huge sagebrush. We were on the downwind side of this draw which drained onto a much bigger in another 200 yards or so. I started calling using rabbit squeals. About the middle of my second series we see one loping over coming towards us about 300 yards out. I stop calling to see if he keeps coming. He slows down then turns broadside. My gun was sitting next to me with my harris bipod extended out and also resting on the stock butt. I start into some lower volume squeaks and he turns back towards us again. The bottom of the draw was thick and fairly tall and thats right where he headed.
We both lost sight but knew he was within 50 yards. We're both looking around and at each other whispering "where'd he go".
I stopped calling and in about 5 seconds that yote jumped up on the opposite side of the sagebrush...scaring us both. My buddy Larry levels his 22-250 and fires, never even getting his gun at eye level. This yote runs off back the way he came, out of sight, then back in sight. I let loose on the call again and he stops dead in his tracks behind a this sagebrush, thinking he was hid.
I had set my bipod legs on my feet to elevate the barrel some. After the coyote had stated coming hard I'd turn my scope power down all the way to 4.5x. I held the xhair in the middle of him and touched it off. milliseconds later 1 dead yote.
D

I have found that the coyote like early mornings to around 9:00 or maybe as late as 10:00 to answer and come to my calling . They don't come as well after that till the weather has been or is getting ready to be bad with cold and or snow . They are real good at forecasting the weather . The coyote will again be active later in the day , say around 2 or 3 they will start moving . If the moon is up they seen to be active even during the day if it's not too hot . Over the years of doing control work I called all of the months of the year . When you are there to keep livestock alive you don't worry if they have prime fur if they are causing problems they have to be taken . For them killing is their livelihood , but when it's livestock they are killing it's the farmer and ranchers livelihood so it doesn't matter if they have a good fur on them . That is the reason that I used my calls and say that the sounds are seasonal , some sounds just work better at some times of the year then at other times of the year but some sounds will work all year long . Doe blats , turkey leaving the roost hen chirps ect. are some that work well most of the time . Baby animal sounds worked best for me in the spring time as did the puppy sounds , that's when I needed the adults with pups that were killing in the spring and I used the puppy sounds to take them if they hadn't been burned out on them by others already . When you have the chance to be able to get out at all seasons of the year and observe the predators at all times of the day you can learn a ton about what their reactions to different situations are and how best to deal with them under different situations for your needs at that time . They make a living and stay alive by being smart and using all of their senses we can learn to take advantage of that for our own benefit and hunting sucess the way that they do .
S

First try at posting a picture. Shot this female on my first day of calling and on the first stand. Used the old Crit'r Call. One of my favorites. She showed up after two series at the magical seven minute mark. Shot her at 40 yards as she was trotting toward me. Big female. 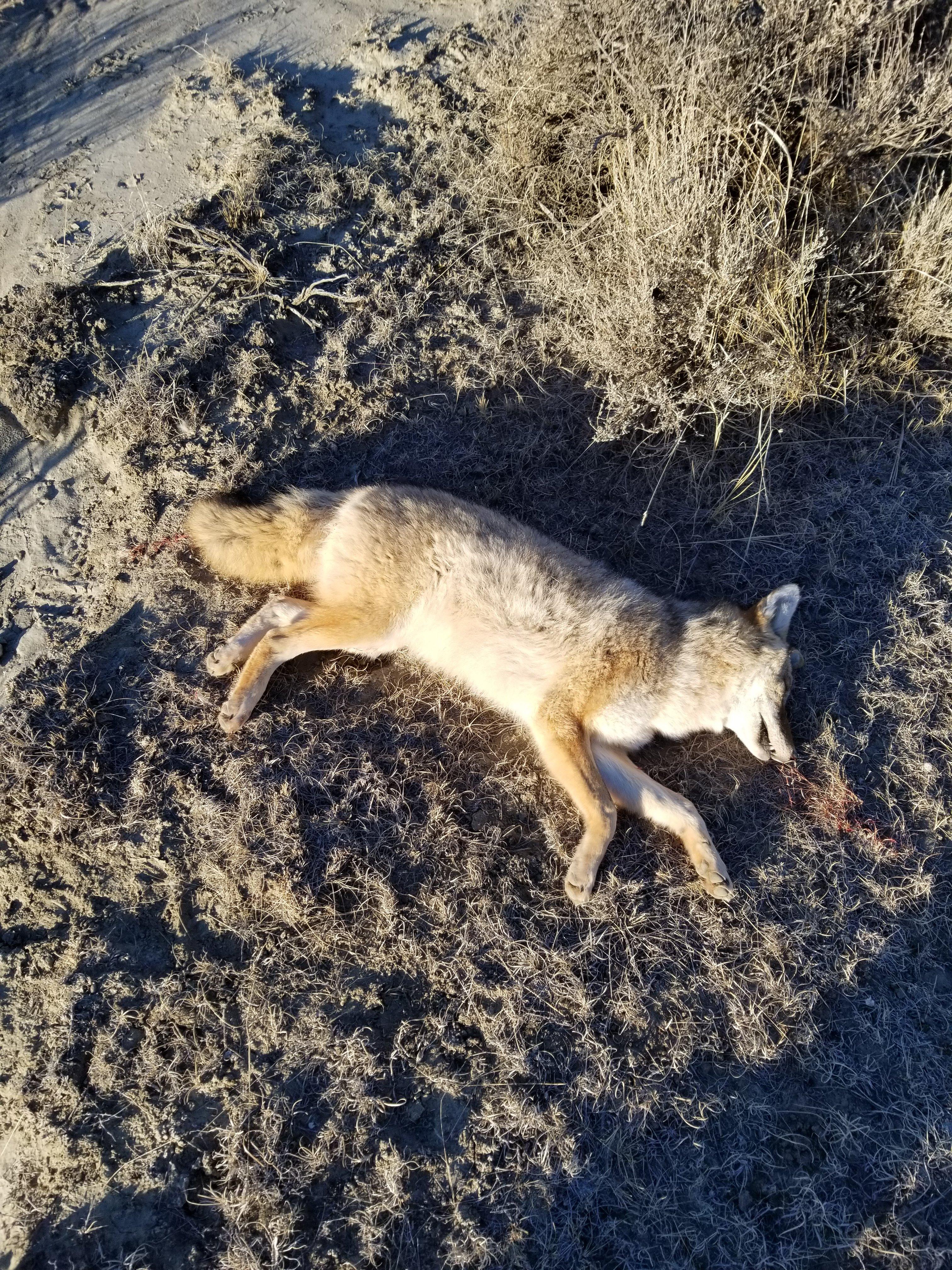 Fine fur like the Sand Hills coyote and about the same size . Nice
S

Shot this big male this afternoon. Blooded the new 6 creedmoor. Came in at the four minute mark to a coyote fight sound. Watched him come for a half mile. 137 yards, 105 Berger. 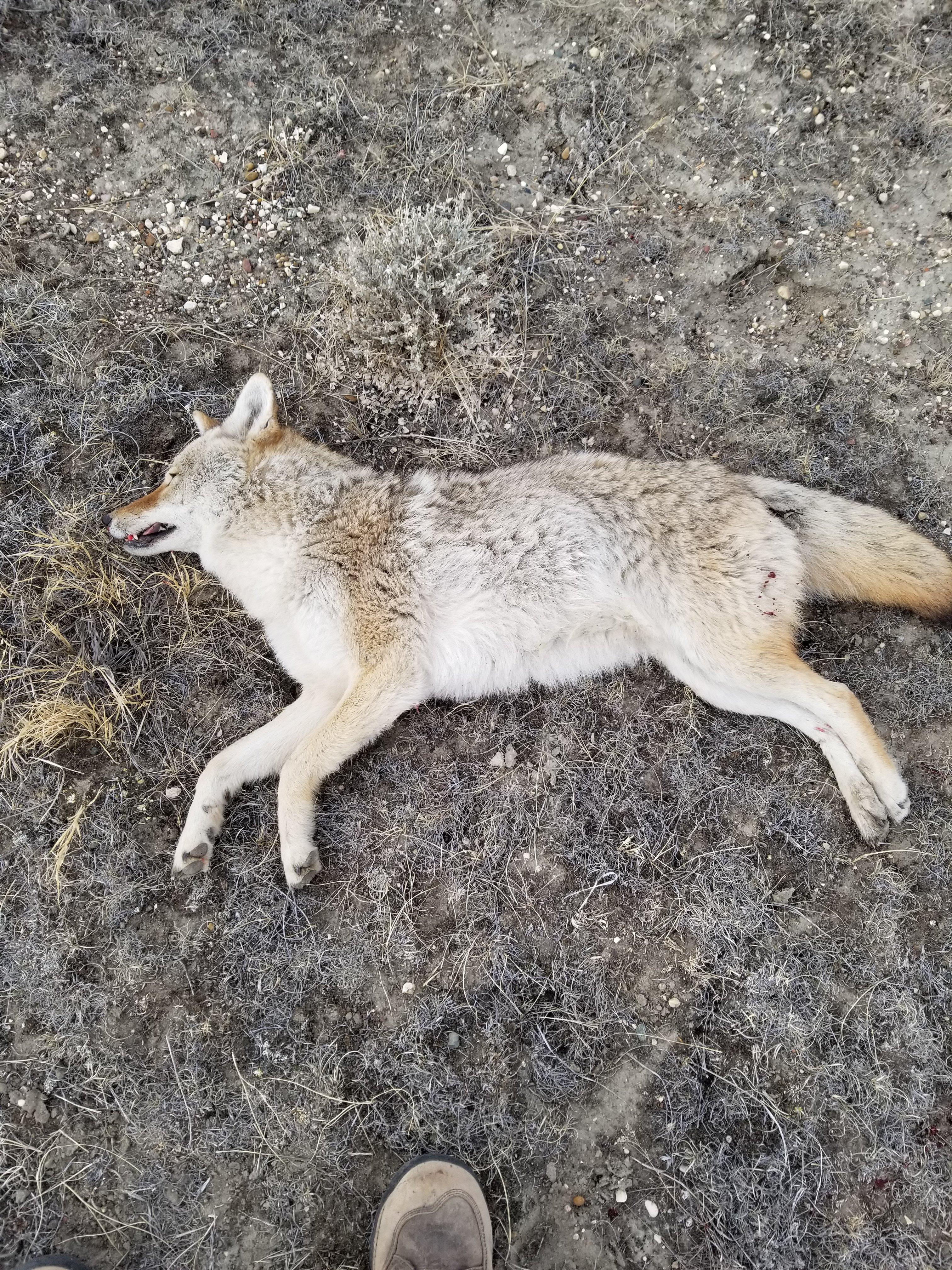 Straight Shooter great job and big dogs too. That males a pretty one. Keep up the good work!

Straight Shooter said:
Shot this big male this afternoon. Blooded the new 6 creedmoor. Came in at the four minute mark to a coyote fight sound. Watched him come for a half mile. 137 yards, 105 Berger. gas gun or bolt gun?
View attachment 314110
Click to expand...

is that berger 105 the hybrid.

Shawn Carverelli said:
is that berger 105 the hybrid.
Click to expand...

I must say that is an impressive looking piece of equipment . I like clamp on adjustable gas blocks . I just put an Adams Arms piston drive on my 7.62x39 . I'm still thinking on what stock and hand guard I want to use .
B

Shawn Carverelli said:
I'm looking for a load for the 105 begere hybrid in a gas gun
Click to expand...

D
Ramblings and Such From Coyote Hunting