I am looking for likes and dislikes of this e-caller. looking at picking one up. How is the audio quality at high volumes? clean or distorted? How is the ease of operation of the remote control? How solid is the USB updating of new calls into the caller?
Objective input would be greatly appreciated.
Thanks.
T

I just tried the Primos Alpha Dogg caller for the first time yesterday. I test all the products I sell but I had not had a chance to use this caller yet. In short, I had a limited amount of time so I took the caller out of the box, stuffed some batteries in it, flipped through the menu and went hunting. (I'm not particularly techy so this is saying something.) On the first stand, I called the biggest coyote of the season into shotgun range and dumped him at 25 yards if a testimonial is worth anything. The photo doesn't do this dog justice. He had long, beautiful gaurd hair--really a nice coyote. 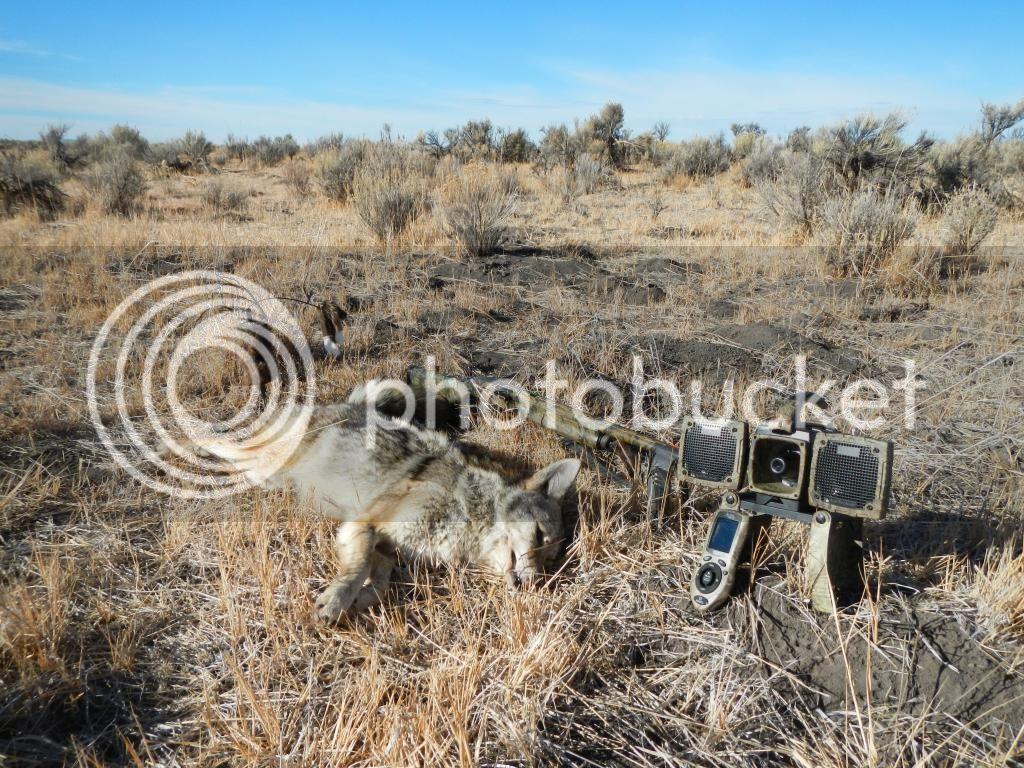 Review-wise, the caller has a well thought out design. The speakers fold in and the legs fold up. There is a remote anchor on the back of the caller. The remote was very easy to use. All the functions should be easily manipulated even with heavy winter gloves on. (The remote functions are easier to work than my Foxpros IMO.) It has two "hot" buttons for preprogrammed sounds. It comes with a Pup Distress sound as Hot #1 and some Rodent Distress as Hot #2 to use as a coaxer.

The speakers seemed to be comparable to the Foxpro Spitfire and Wildfire as far as fidelity goes with more volumn. The sounds themselves however had a hollow sound to them like they were recorded in a bathroom. The unit is capable of using MP3 files and other recordings so it would be interesting to try some other files in it to see how they compare. (Note that the coyote I shotgunned didn't seem to mind the fidelity of the speaker system. lightbulb ) It seemed that the legs and hinges may not stand as much abuse as a single piece unit but time will tell on that.

That is my take on the caller so far. Fire away with any questions. I may or may not be able to answer them at this point in time.

Here's a link to the caller in my store: Primos Alpha Dogg
C

One can't dispute fur on the ground. gun) nicely done.

I have read about the leg issue elsewhere.

Thank you for taking the time to post this.

Haven't used mine yet but I know one thing...This sucker is LOUD!!! IMO, the remote is more complicated than it needs to be.
T 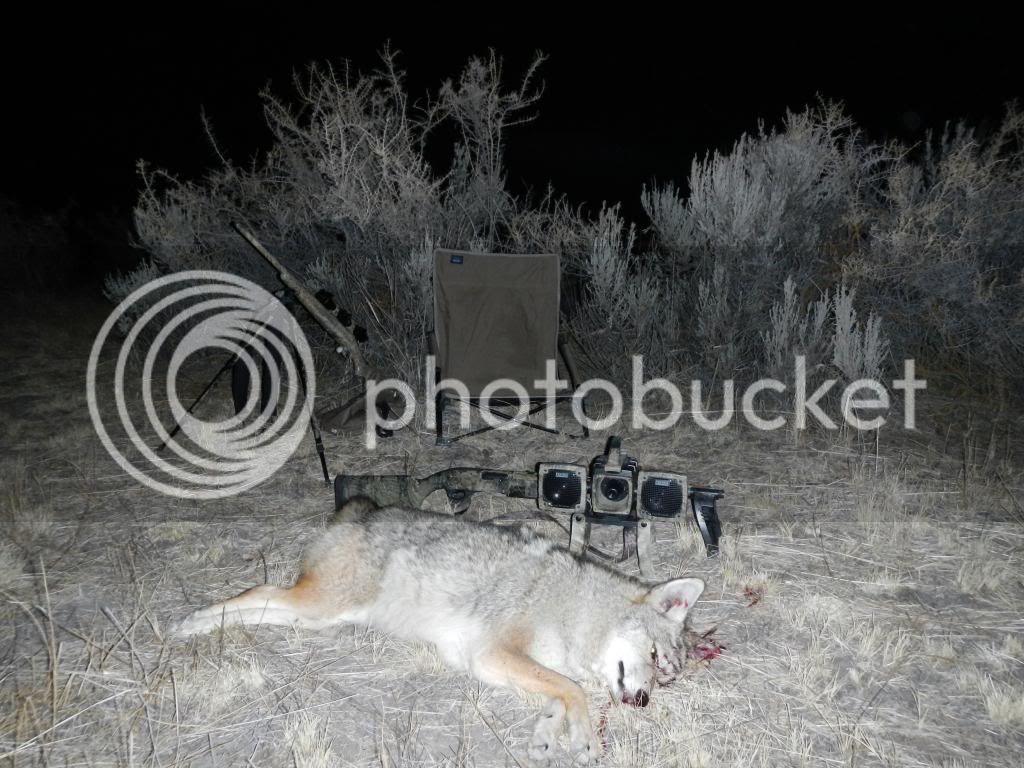 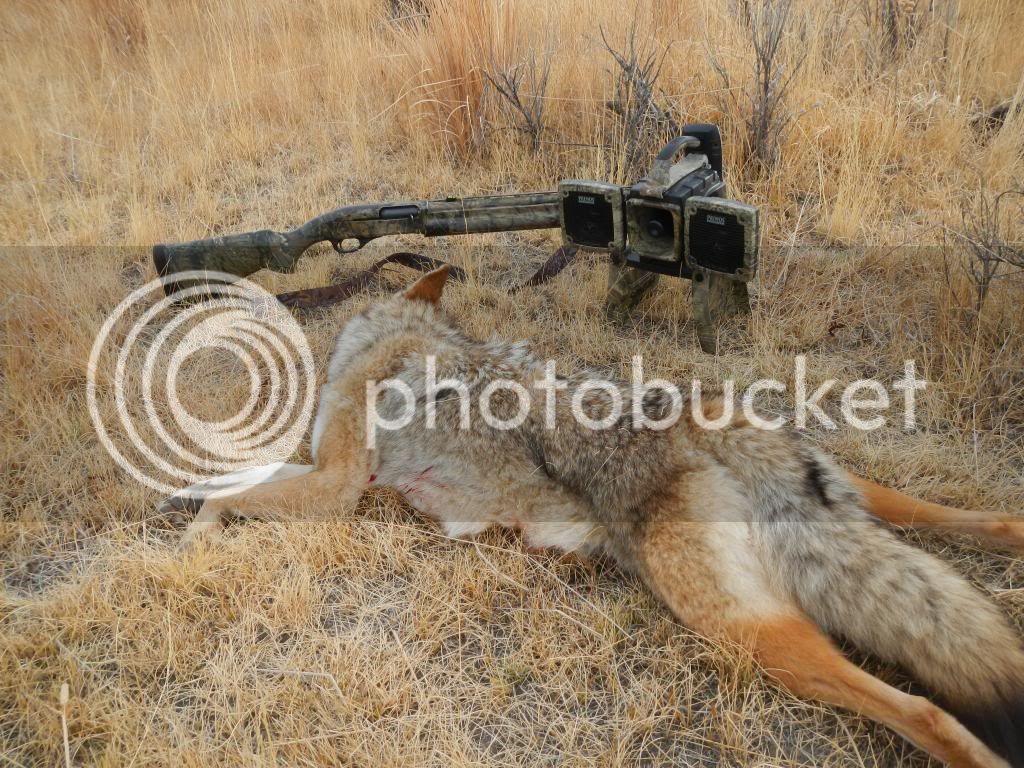 And one rifled coyote from Thursday. 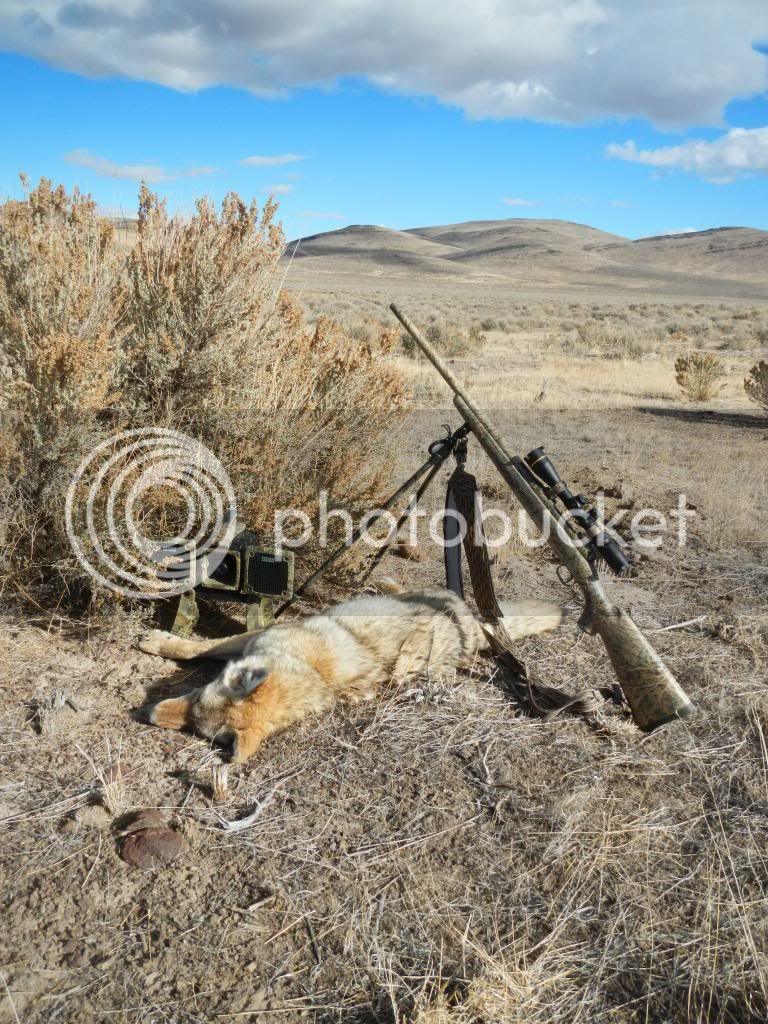 Good luck with whatever you choose!

I haven't used one yet. But they don't come pre loaded with snowshoe hare ( the only rabbit in Alaska, where as the FoxPro does. That will have a lot to do with. My purchase.
C

Cold Trigger Finger said:
I haven't used one yet. But they don't come pre loaded with snowshoe hare ( the only rabbit in Alaska, where as the FoxPro does. That will have a lot to do with. My purchase.
Click to expand...


I checked out the Primos Web site and the Snow Shoe Rabbit Distress sounds can be purchased for $1.99.
C

Ya. My problem is if they did not preload a primary extreme cold weather prey species call, then perhaps the caller won't work well at 40 below. Or even 30 below. We've already had 30 below and its just getting into Nov. . Trapping season isn't even open yet except on coyote. . We can use a light at night during trapping season on furbearers. Fox Pro comes pre loaded with snow shoe hare. And they have a good reputation in the cold.
D

I will likewise confirm that a portion of the resonances good to go on e-inquisitors are tricky to double with mouth calls.
I feel a great place to begin is with two coyotes. How do you murder two coyotes?

The sounds are very good they can be to loud at times especially on calm days even in the sand hills or on the open plain. i think it may be a little heavy and somewhat bulky when you carry for some distances. usb works great easy to use and the whole machine is easy to use after a little use. You can put in your favorite sounds in a sequece you prefer or use the professional calls and sit back and get ready. I still say keep the sounds down unless it real windy. You can even learn to mouth call just listening to randy anderson call.
S

Not trying to bash the Alpha Dog. But, the foxpro wildfire is just as loud, better warranty, better CS and built here in the USA. You can add an external speaker for $50 if you need more volume. Allpredatorcalls.com will but 35 sounds of your choice, don't need anymore than that IMHO.

You can add extra speaker to alpha dogg but who cares if you have to play your caller that loud it must be really windy or there are no coyotes and anyway what can you tell me about open reed calls I have been using them for 35 years with real good succes but I won,t mention any names their probably no good. wow
C

I hunted over a freinds turbo dogg over the weekend, even with the locals runnin dogs on em since the snow fell they would still come in but my freind kept killin the sound when he seen em....i got $200 worth of Cabelas gift cards for xmas so i grabbed my self one....got it out at the farm i was unloadin at in northern Wi and within minutes had 4 yotes in the farmers yard! He told me next time im up here with a load for him make sure to bring my rifle...called in a bunch of crows with it for his son too....
Share:
Reddit Pinterest Tumblr WhatsApp Email Share Link

B
E-caller and LR shooter combo