new rifle for my son

I am taking my son hunting for elk, mule deer and antelope. He has a small stature and recoil sensitive.
I am looking for a rifle with a shorter length of pull(LOP) (e.g. 12 1/2") with light recoil, a flat trajectory, hopefully less than 7 lbs without scope, and has enough energy, at 400 yards, to knock down an elk. The rifles with a short LOP are limited on the caliber selections. I have looked at tikka t3 lite compact and a browning x bolt micro midas, both in 7mm-08. I'm wondering if anyone has any experience with either of these rifles? Is the 7mm-08 an adequate caliber or would a 6.5/26 be enough? With the 20" barrel will there be a lot of muzzle blast and/or will the ballistics suffer to meet the above criteria?
Or am I better off getting a rifle in a different caliber (e.g 260 rem) with a standard LOP, a longer barrel and cutting off the stock or would it upset the balance of the rifle?

Any suggestions for caliber and rifle selection would be appreciated.

Just an idea born of my own experience a very long time ago. I was "recoil sensitive" and learning to use a 12 gauge shotgun was a miserable experience. We shot all day for several days. On the second day of shooting I found that folding a bath towel into four layers and draping it over my shoulld under my jacket worked miracles, even after the first day of torture that bruised my shoulder in a painful ugly mass of black and blue.

Weatherby Vangaurd Youth 7mm-08. You will pay $250 for a rifle that will fit him for many years. Smooth, accurate, and even comes with a target confirming its accuracy. It also comes with a compact stock so you can change them out as he gets bigger. That's what my son started with, now he's 13 and shoots a 270 wsm, 7 rum and 338 rum respectively.
R

This probably will not be what you want to hear. Teach your son how to shoot and NOT be recoil sensitive before you take him hunting. If you want to have many years of hunting with him and have GOOD times you will NOT be skimping on what it takes to get your son proficient with a SUITABLE rifle for the intended game. It takes time on the range working up from 22lr up to suitable calibers for big game. Get a muzzle break and ALWAYS use ear protection. Do load and shoot a few rounds and then leave the chamber empty on one which will really show flinch. I have seen too many young people turned off of hunting because they are FORCED into a situation that they are not ready for. Wound and have to trail game a long ways or loose it because of a bad shot that the person was not ready to make has turned lots of people off hunting.
J

I vote for the 7-08 as well. Good round for kids and wifes and if you hand load you can get some heavy bullets for this gun. The Tikka T3 light is really light. Now I'm not recoil sensitive but my wife is. I bought the t3 light in a 243 for my wife. I was actually surprised as to how much recoil it had but most 243 I have shot have been heavy bull barrel style guns. So maybe this has somewhat jaded my opnion when I first shot the gun. My wife noticed a big difference from my brothers which was a savage and that gun, not a bull barrel but just a heavy gun. Manner of fact I think my savage is almost the same weight as my sendero.
W

If he is already recoil sensitive then teaching him good shooting habits is best done by practicing with rifles with low recoil. You don't learn good shooting habits by shooting rifles that you are already recoil sensitive with. What ever you get for him definitely get a limbsaver or equivalent slip-on recoil pad. A good brake is definitely a good idea also.
E

How much do you want to spend? A Remington Model 7 is available in a 7mm-08 or a 260 with a 20 inch barrel. You could shorten the stock an inch and it will handle well. You could also buy a youth stock for a model seven and save the full length stock for when he is older.

I don't consider either one of those cartridges a 400 yard Elk cartridge but, considering the other points, they are as good as you are going to get.
M

You could always get a 270 with a 22 inch barrel, mine kicks about as hard as my 4 year old when she is real angry. Put a good recoil pad on it. My sister is fairly new to hunting and she is pretty small in stature.. don't think she's broke 100lbs. She shoots a 30-06 no problem. but when she was sensitive to recoil my dad got her a shoulder pad that she would just wear. And you will most likely have a few layers on during elk hunting which will help t alleviate some of the recoil. Caliber doesn't really matter as much as most people make it out to be. Shot placement is everything. My dad has killed elk out to 400 yards with a 243. Get a rifle he can shoot well and that he is comfortable with and make sure he is practiced out to where you want to shoot and have fun making memories to last a life time.

Here is what I did for my son. My son is on the smaller side and left eye dominant. He shoots much better left handed. This put a serious limitation on available rifle options. I did have a T/C Encore that was ambidextrous and was able to cut down a 308 barrel to 17.25” and put a 4 position m4 style stock on it. This allowed for a very compact little rifle, still heavy enough to help deaden the recoil but very compact and allowed for down to a 10” LOP. 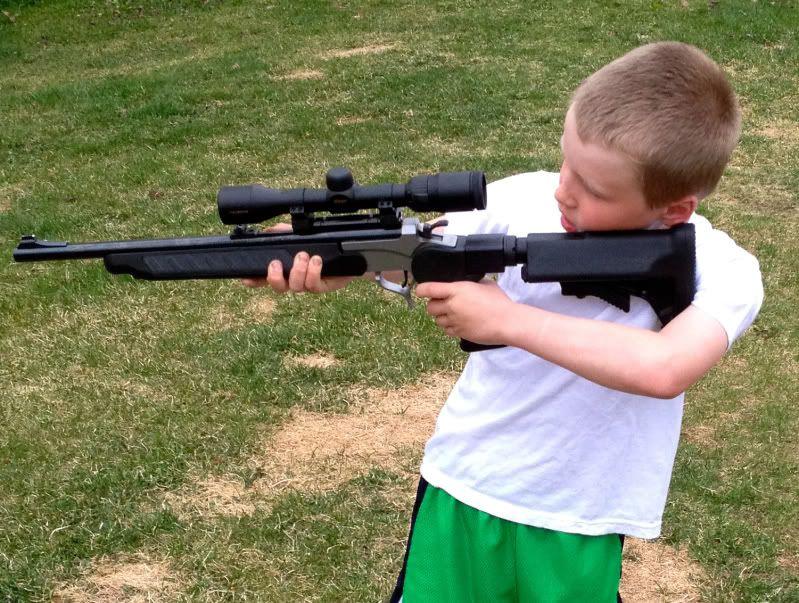 It’s still heavy enough that he has to use standing shooting sticks for offhand shooting but as far as a good safe, accurate, rifle that can grow with him I don’t think you could do much better.

The real trick to getting them set up is handling recoil. This can easily be done by loading up reduced loads with trailboss powder. I loaded 150gr Nosler BT with 10gr of Trailboss. This clocks right out the barrel at 1025fps from his 308. Its very accurate and with almost no recoil and muzzle blast equal to that of a 22 mag. I have used these loads and this rifle to introduce several other kids to shooting. I would load these up and have him shoot them for sevdral months before I ever started building up loads.

This is my buddies daughter trying them. She was very recoil shy but didn’t mind the trailboss loads at all


I then slowly upped the power level for a few rounds each range trip until he is now comfortable with 130TTSX @ 3000fps and this is the load that he will use for bears and moose this fall.

Another very important thing is that you need to get them shooting off a standing cross stick or some other supporting device. Even though that little encore only weighs 7 pounds its still close to 10% of his body weight. You can’t expect someone to shoot that much weight offhand. It would be like me shooting a 35 pound rifle offhand. It will only cause poor posture and bad shooting habits. Shooting off standing sticks also helps to handle recoil a lot easier than shooting form a bench.

Lastly paper targets get boring very quickly, and it can be hard to hold thier focus. Balloons are your best friend. Get a package of ballons and one of those hand pumps to inflate them. I have had a lot better luck getting the kids to pop balloons at all ranges over shooting paper. That instant feedback and gratification is key to keeping them interested and balloons are light and easy to work with compared to clay pigeons or other reactive targets.

I have regrets in regards to down range energy, but that is my opinion and I'd like to shoot further... He could care less. ON the other hand I'm glad he has a short action b/c his rifle handling skills are amateur at best. He did shoot a cow at about 150yds and just last yr my girlfriend took a her bull with it at just under 200yds. Both good shots and both elk expired quickly. The bull took 2 steps and the cow basically plummeted over the ridge she was shot on.

Good thing w/ the savage is they are inexpensive, accurate out of the box, and after a few yrs just get a new stock to fit LOP.
S

I also think the 7mm08 is your best choice. The 260 is real nice as is the 6.5x55 but the 20" bbl makes a big difference. I have a good friend who has been shooting whitetails with a model 7 youth 7mm08 for years with factory 140gr winchester ct ballistic tips and that firearm stops these 100 pound whitetail in VA really well out to 300. I've literally seen him shoot hundreds with it.

I really like the 260 myself and own 3 of them but the 20" bbl gives you muzzle velocity of 2500 max its going to give you the great penetration inherent with .264 but wounding at lower velocities is not emphatic.