Action: get it blueprinted
Scope mount: Help!
Trigger: worked over factory for a clean break (already done)
Stock: looking at mostly a McMillan or maybe a hs percision
Barrel: looking at the 15inch lilja pistol barrels or possibly a 18 inch McGowan blank? Both are right at $200 dollars. What would you do? Other options

Anything else I'm missing?
Thanks guys pretty excited!
B

For a scope base, I chose to go with a Ken Farrell base. There are other options here as well.

For me, I chose to do a Bartlein barrel on my XP (will be doing a Krieger on my Rem rifle..). If you go with a threaded and chambered barrel, you still have installation to deal with. I'd personally go with a bit longer barrel than 15", but that's my preference.

For a stock, you may want to consider a stock by Aaron (rickiesrevenge) on Specialty Pistol. Very reasonable cost.
S

I like the looks of the aarons stocks! do you have his contact info? and what do they cost?
R

Seems like you have a good handle on it.
If you are ever coming through Grants Pass and have some time, get a hold of me and you can shoot my xp's . I have both McMillan's and HS stocks. Aaron's stocks are nice too. I have one of his 1st gen stocks, but its a little small for my hands.
I have used many McGowan barrels (blanks) for xp builds and have had very good results with them. Great value for the $$$.
The .284 is an excellent choice for an SP.

You should be able to get Aaron's contact info off of specialty pistol website in his profile.

It does have a smaller grip. Cost is around a couple hundred bucks.
S

okay thanks guys for all the help so far! so i want to put a brake on the gun so what would the best barrel length without it being too long/awkward. and what contour is a good one for LR SP
R

Slaysesh said:
okay thanks guys for all the help so far! so i want to put a brake on the gun so what would the best barrel length without it being too long/awkward. and what contour is a good one for LR SP
Click to expand...

I can't really say what the "best" is. -To many opinions on that.
I like the McGowan #7 target taper finishing at 17" without the brake. This barrel is .875" at the muzzle. I have several xp's with different lengths an contours, and this one is a nice balance between weight / length and ease of packing around. 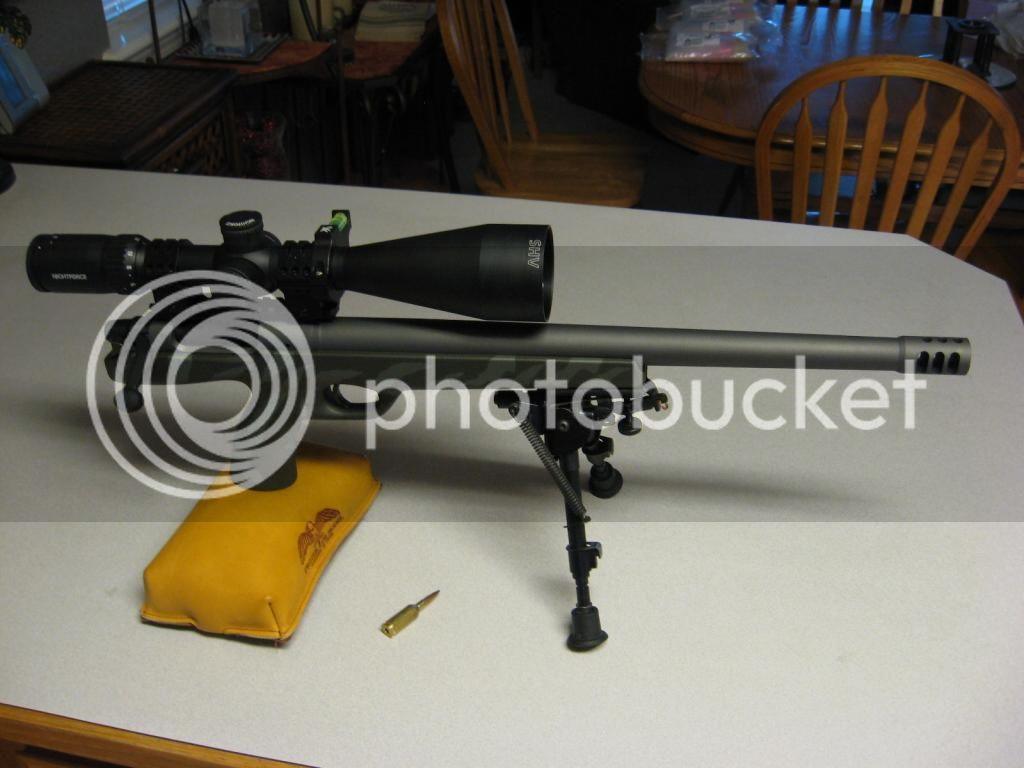 I talked to Aaron last week and he said he is about 1 1/2 yrs on the waiting list. Very similar to mcm as already said. X2 on 17" ish barrel. Egw also makes a good base.
What is your intended use for this rig? If you are wanting something that will be punching fur as well as steel, keep weight in mind. Barrels and scopes are the major contributors. Also if you are wanting to use long sleek projectiles you may want your action to be relieved at the front of the port for loaded extraction. Talking about that, get an external bolt release installed as well. After using it a time or two you'll be glad you did!
Good luck and welcome to something as addicting as crack. Lol
S

I hunt more then I target shoot. so will see a lot of hunting hopefully! What would my velocity difference be between a 15 inch barrel and a 17?
B

Slaysesh said:
I hunt more then I target shoot. so will see a lot of hunting hopefully! What would my velocity difference be between a 15 inch barrel and a 17?
Click to expand...

I would estimate between 60-80 fps would be lost going to a 15" barrel from 17". Are you planning on hunting open cuts, or more in the timber? I would stay with the 17" tube either way.
What weight bullet were you planning on shooting out of this set up, and for what game?

prob. Bear, elk and deer and looking at the 162 A-max.
I would hunt both because we have both here on the coast.
The reason for considering the 15 inch tube thats the longest lilja will make one and not charge the full barrel price so $200 not $345.
then that leaves me with mcgowen and not 100% they are as good as lilja?
but seems like you guys are suggesting more towards the mcgowen.
so most likely i will do that. get a 17" mcgowen
B

Some have had really good results using McGowen. I believe Rogue Hunter uses McGowen blanks and has some real shooters.
R

Buttermilk said:
Some have had really good results using McGowen. I believe Rogue Hunter uses McGowen blanks and has some real shooters.
Click to expand...

Thanks Rog!
Slaysesh,
I've used Bartlien, Douglas xx match, Pacnor super match, Kreiger, Shilen select, and McGowan's all for xp builds.
All of the McGowan's (at least a dozen now) have shot under 1/2 MOA consistently at 300 yards. Some of them are closer to 1/4 MOA guns if I do my part. My 20 Vt's shoot in the .1's & .2's all day long at a 100 yards. I killed a sage rat at 743 yards last year with my 6.5-.284 xp. Put hits on a 24" x 24" swinger at a mile with the same gun. -It wears a McGowan. Did a rockchuck at 1017 with my McGowan barrelled 1-8 twist .243 WSSM xp. Rolled a nice black bear on a clear cut and filled five Wyoming antelope tags with that same xp .
That being said, unless I was going to build an ultra competitive long range bench gun, The McGowan would get the nod. -Best bang for the buck.
Your bullet choice should work well for your intended purpose. -The .284 is a great cartridge for the game you mentioned.
You will have a fun time with it! gun)